Happy Thanksgiving! I hope you and your family are doing their best to keep everyone safe as we enjoy this holiday season.

With Thanksgiving creating some extra Thursday games, I’m getting my Week 12 article out a little earlier this week. As usual, we'll first consult the playoff leverage charts, check quickly in on the totals, and then it’s on to my favorite NFL betting opportunities of the weekend! 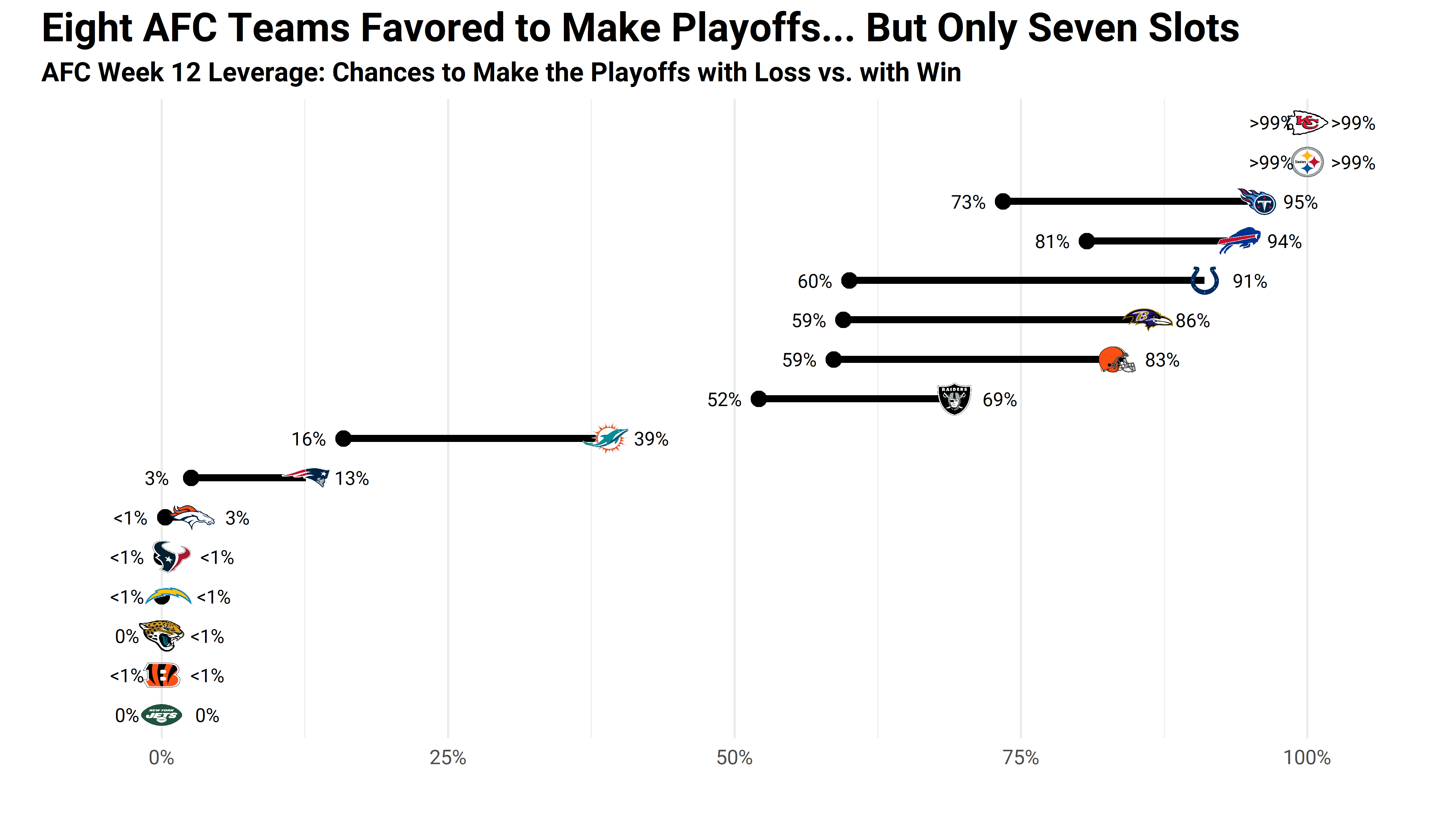 There are eight AFC teams favored to make it into the playoffs. The Miami Dolphins are trying to stay alive as the ninth team, and their Week 12 game against the winless New York Jets does nothing but help their odds. As we know, only seven teams can actually advance, which makes each game count all the more as we head into the final stretch of the season.

On Thanksgiving Day, the Pittsburgh Steelers have the opportunity to deliver a blow to their division rival in the Baltimore Ravens, but aside from that game and the AFC South divisional match discussed below, there are no games between contending teams this week. 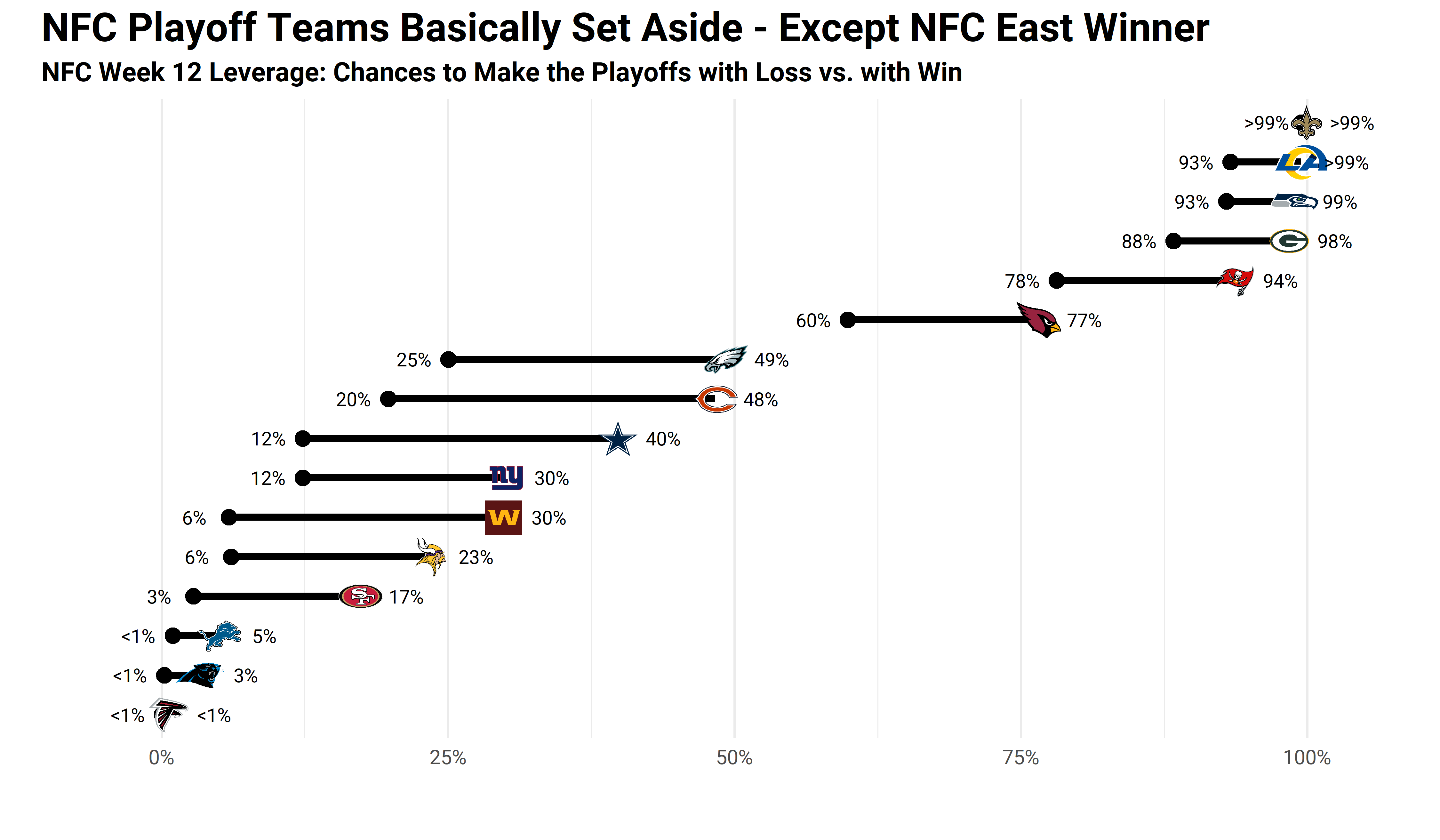 The NFC East is a mess, which means that each of the four teams has a reasonable chance of advancing to the playoffs, though it will only come by winning the division.

Otherwise, the NFC teams are fairly set. The Chicago Bears are most likely to upset one of the other six teams, but their chances drop substantially if they lose on Sunday Night Football to the Green Bay Packers — which they’re currently favored to do by 7.5 points. 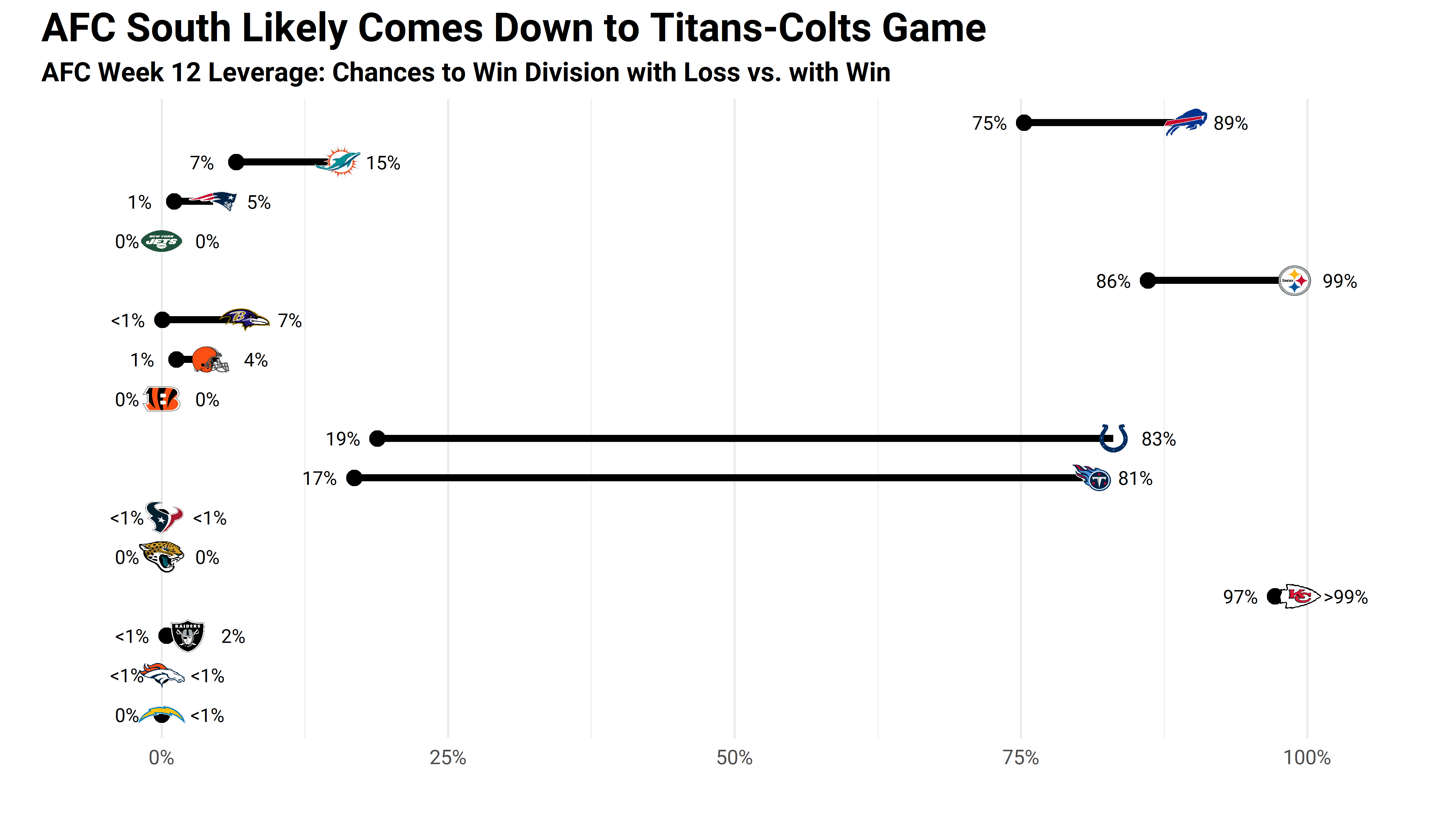 The Dolphins had a big chance to catch the Buffalo Bills in the AFC East race last week, but they ultimately lost against the Denver Broncos. Now, the Bills join the Steelers and Kansas City Chiefs as large favorites to win their respective divisions.

Meanwhile, the AFC South will play host to the most impactful game of the weekend, as the Tennessee Titans and Indianapolis Colts play their second game against one another. Both teams are currently 7-3; the Colts won the first game 34-17 and are favored to win this one by 3.5 points. 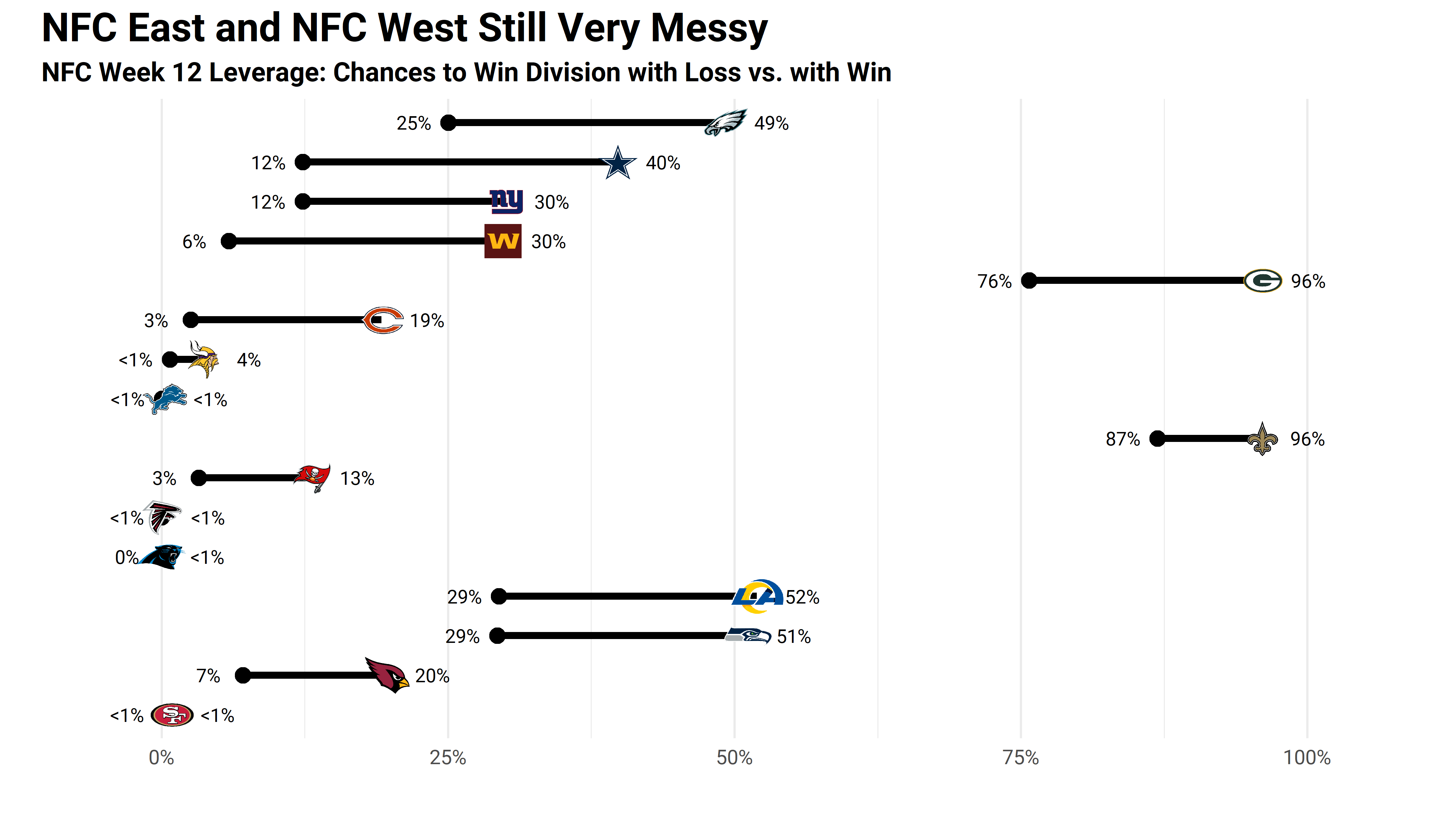 The NFC West is the best division in football, with the Arizona Cardinals (6-4), Los Angeles Rams (7-3) and Seattle Seahawks (7-3) all likely to make the playoffs. The Rams and Seahawks are leading the way, with the Rams holding the tiebreaker thanks to their Week 10 win over the Hawks.

On the opposite end of the spectrum of division strength is the lowly NFC East. No team is a clear favorite, with all of the teams at 3-7 except for the Philadelphia Eagles, who lead the division at 3-6-1. The Thanksgiving Day game between the Washington Football Team and the Dallas Cowboys has the most playoff implications here, as the winner jumps to first place.

There’s not much to say about the NFC North and NFC South, as the Packers and New Orleans Saints are very much favorites to win their respective divisions.

Let’s take a look at the totals for Week 12:

Week 11 was the second good week in a row for the unders. Sportsbooks are again moving lines down, though as noted last week, two teams that have had low totals (Bears and Giants) were on bye last week. Conversely, all 32 NFL teams will be in action this week, thanks to the Thanksgiving Week schedule.

The later we go in the season, the higher probability that rain or winds could be lowering totals, which looks to be happening for a couple of games this week.

Each game has a quick table showing the expected points added (EPA) generated per play on offense, the EPA the defenses have allowed on defense, the starting quarterbacks' 2020 PFF grades (and rank among quarterbacks with at least 100 snaps), along with each team's PFF power rating.