Week 11 of the 2020 NFL season is upon us, so it's time to investigate the matchups and identify the best NFL betting opportunities of the weekend.

This week provides a rough slate, given the uncertainty of some quarterback situations at the time of writing. I’ve got a few Week 11 picks to share, nonetheless, but first we'll consult the playoff leverage charts and take a look at the totals. 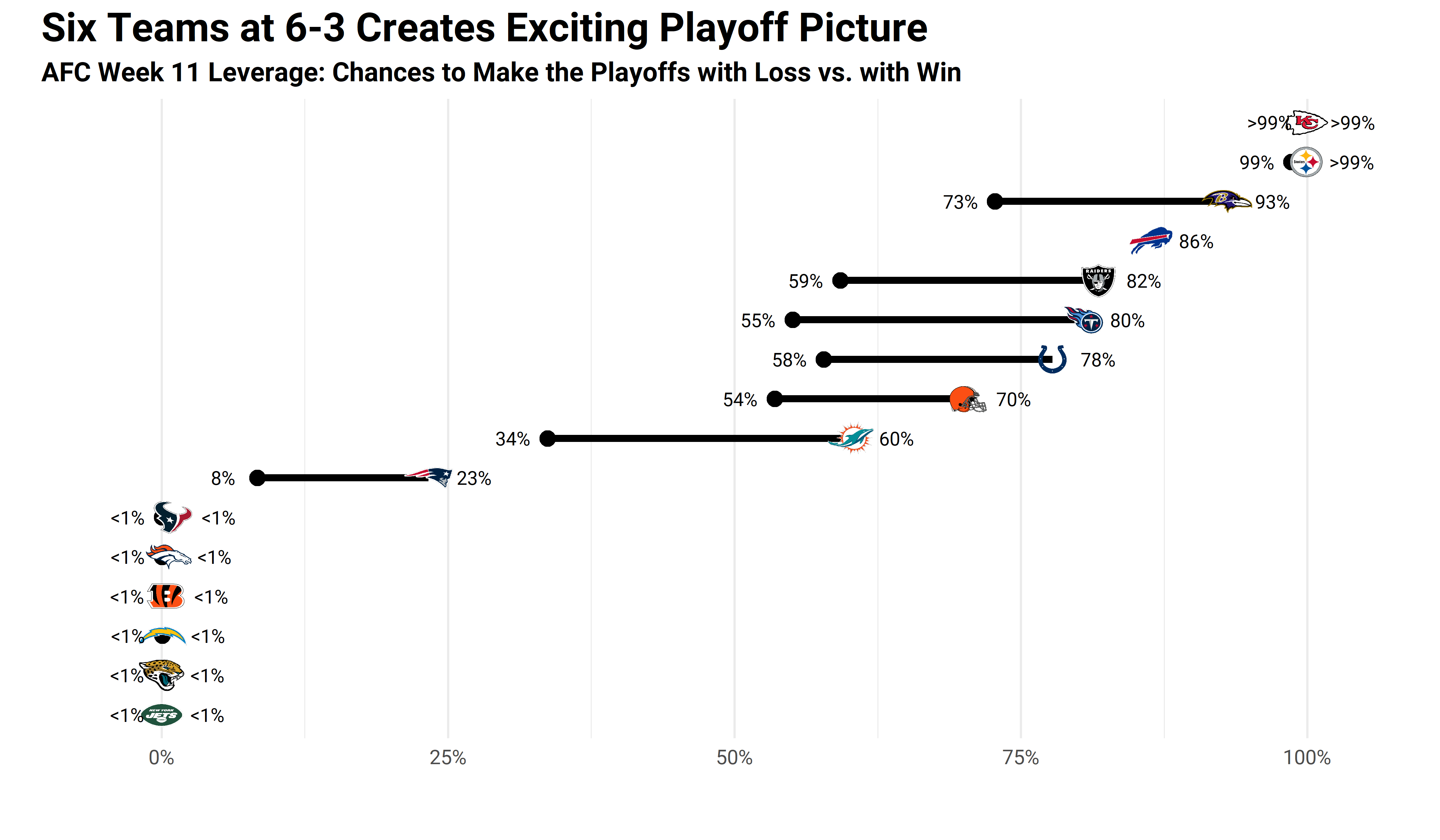 Eight teams have a 50% or better chance to make one of the seven playoff slots, and the Miami Dolphins trail closely behind. This is because there are six AFC teams at 6-3, and they are spread across all four divisions. The Week 11 game with the biggest AFC playoff implications is the 1 p.m. clash between the Tennessee Titans and Baltimore Ravens, teams that can both give up a lot of playoff equity with a loss this week. 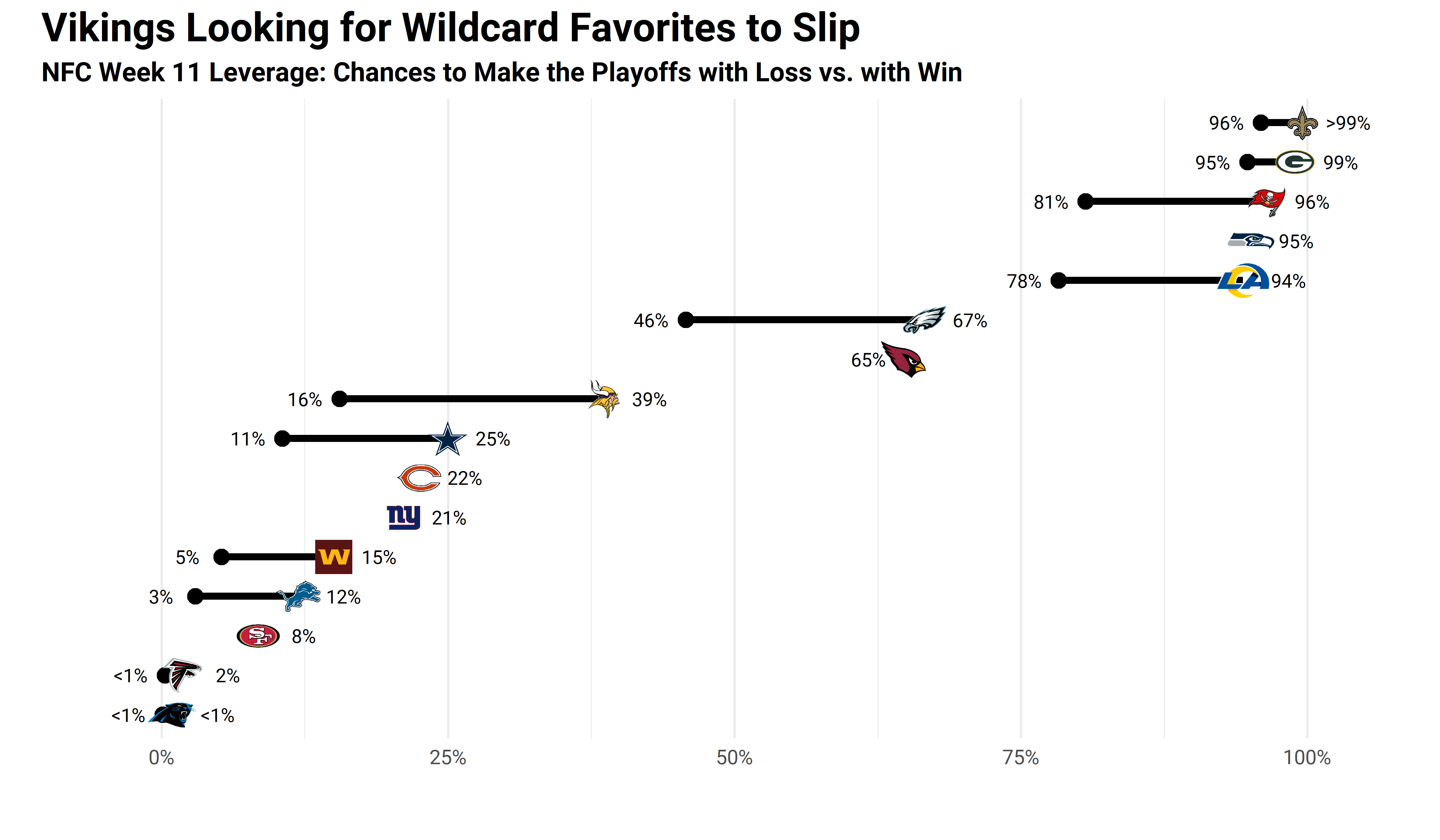 Six NFC teams are clear favorites to get in, with the NFC East title still somewhat up for grabs (see below). However, the Minnesota Vikings have been climbing the standings and are hoping for some help from the top teams’ opponents. The schedule helps them a bit this week by forcing the Los Angeles Rams to play against the Tampa Bay Buccaneers because — unless a tie occurs — one of them has got to lose. 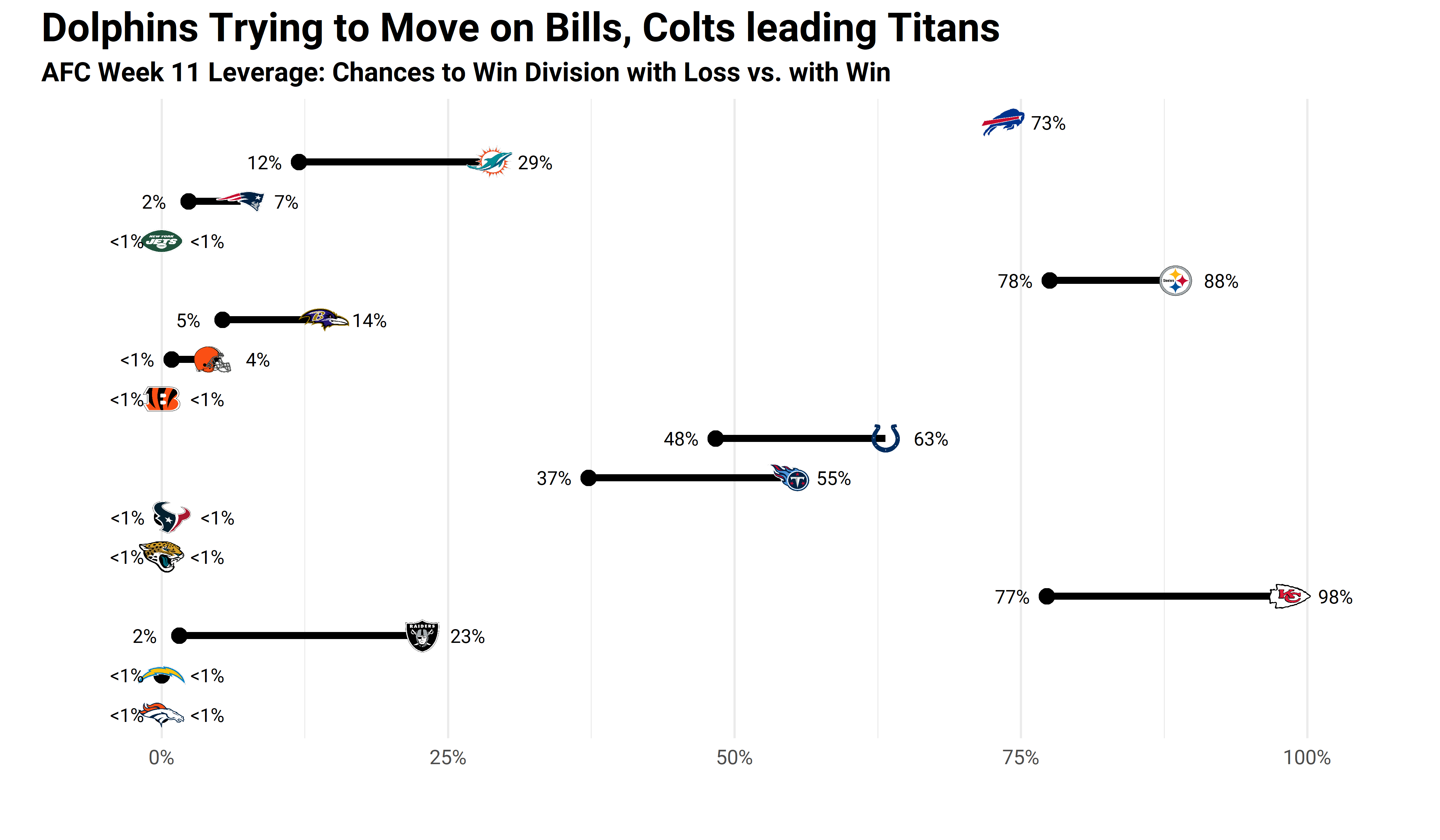 Miami is half a game behind Buffalo, though they'll be hoping to catch up as Josh Allen & Co. are on their bye this week. The Bills will almost certainly have the tiebreaker over the Dolphins, however, so they’ll still need to improve beyond that, even with a win this week.

The Indianapolis Colts and Tennessee Titans are both 6-3, with the Colts having the head-to-head tiebreaker from last week. Next week’s rematch could be determinative, but both teams will try to separate from one another this week — the Colts against the Green Bay Packers and the Titans against the Baltimore Ravens. 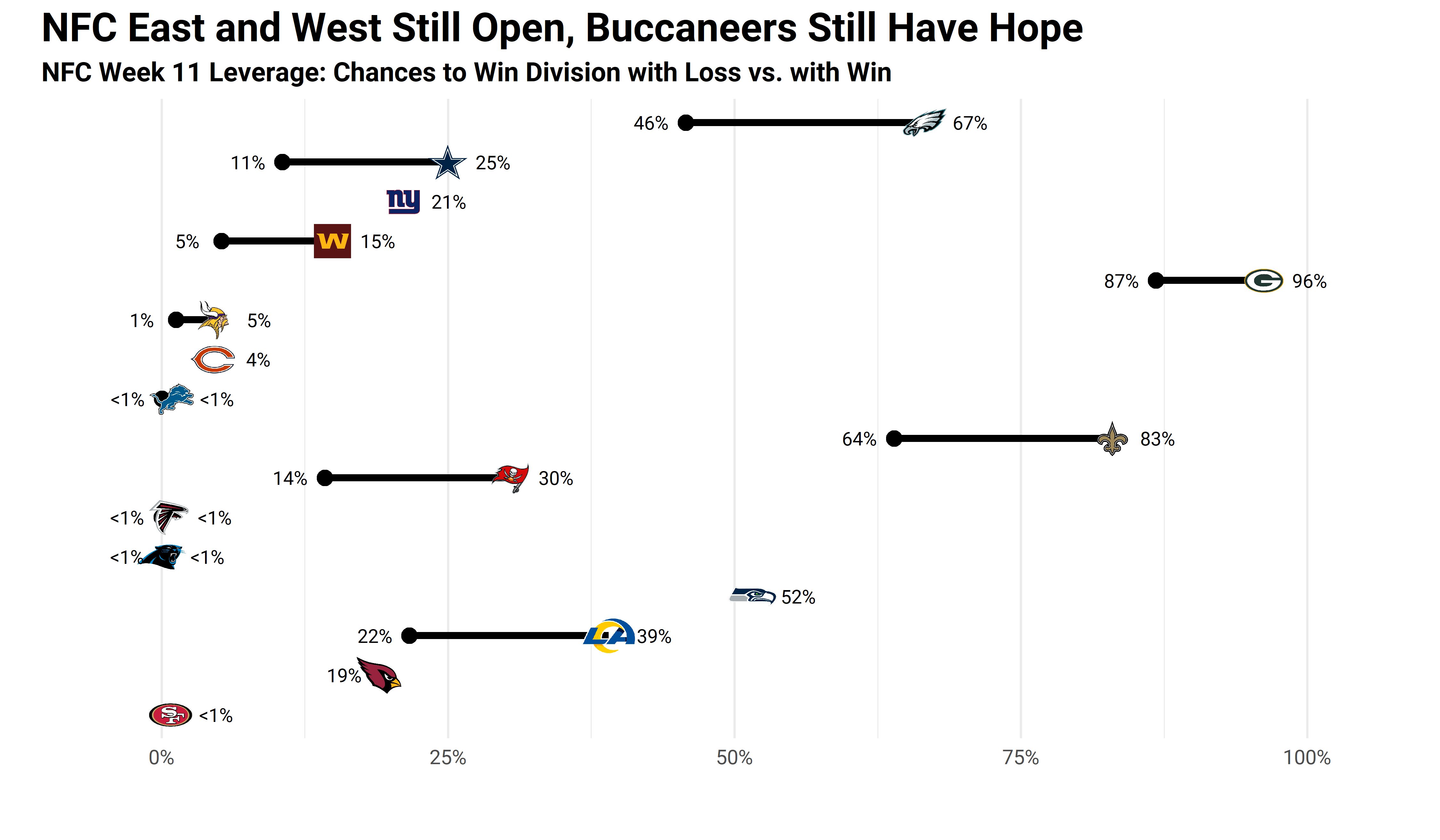 The NFC East and NFC West are at opposite ends of the division-strength spectrum, but as such, both are still up for grabs even though both divisions have a favorite.

The Tampa Bay Buccaneers are hoping to catch the New Orleans Saints, but that will be challenging, given that the Bucs are half a game behind and that the Saints have the tiebreaker.

Aaron Rodgers and the Green Bay Packers are the only NFC team clearly in control of their division.

Let’s take a look at the totals for Week 11:

Week 10 was a good week for unders. Despite this, the lines are larger this week, though this makes sense in the context of other factors. Last week had a couple of wind-affected games, while forecasts for this week are much kinder.

More importantly, the teams on the bye make a huge difference. While Week 10’s bye teams included a low-total-line team in the New York Jets, the other three bye teams, the Atlanta Falcons, Dallas Cowboys and Kansas City Chiefs, are quite the opposite. Conversely, Week 11 has two particularly low-scoring teams on the bye: the Chicago Bears and the New York Giants.

Last week, my picks had a mini-theme of closely rated teams, one stronger on defense and the other more potent on offense. This week continues the same theme. I don’t think this is an accident — as the season goes on, markets tend to be better.

However, I generally believe the market overvalues defense relative to offense. Given the instability of defense, this creates value in this exact kind of situation, especially when you want to bet the moneyline because the stronger offense is an underdog.