• Bet Browns RB Nick Chubb to lead the NFL in rushing: Given how RYOE is a good indicator of future success, we expect Chubb to close the gap and surpass Derrick Henry. Take the +265 odds now.

• Longshot worth firing in RB futures market: No. 2 in the NFL in RYOE, Jaguars RB Travis Etienne is worth a sprinkle at +2500, as he's fifth in rushing yet has the 10th-shortest odds.

• Bet Patriots QB Mac Jones INT leader: A QB quartet is in front of him with eight interceptions, but Jones (7) has NFL's second-highest INT rate and a 4.8 turnover-worthy-play rate, trailing only Zach Wilson and Justin Fields.

With nine weeks of the 2022 NFL season in the books, it's a good time to revisit the futures betting markets. Let's look today at player futures and find some value in three specific markets: 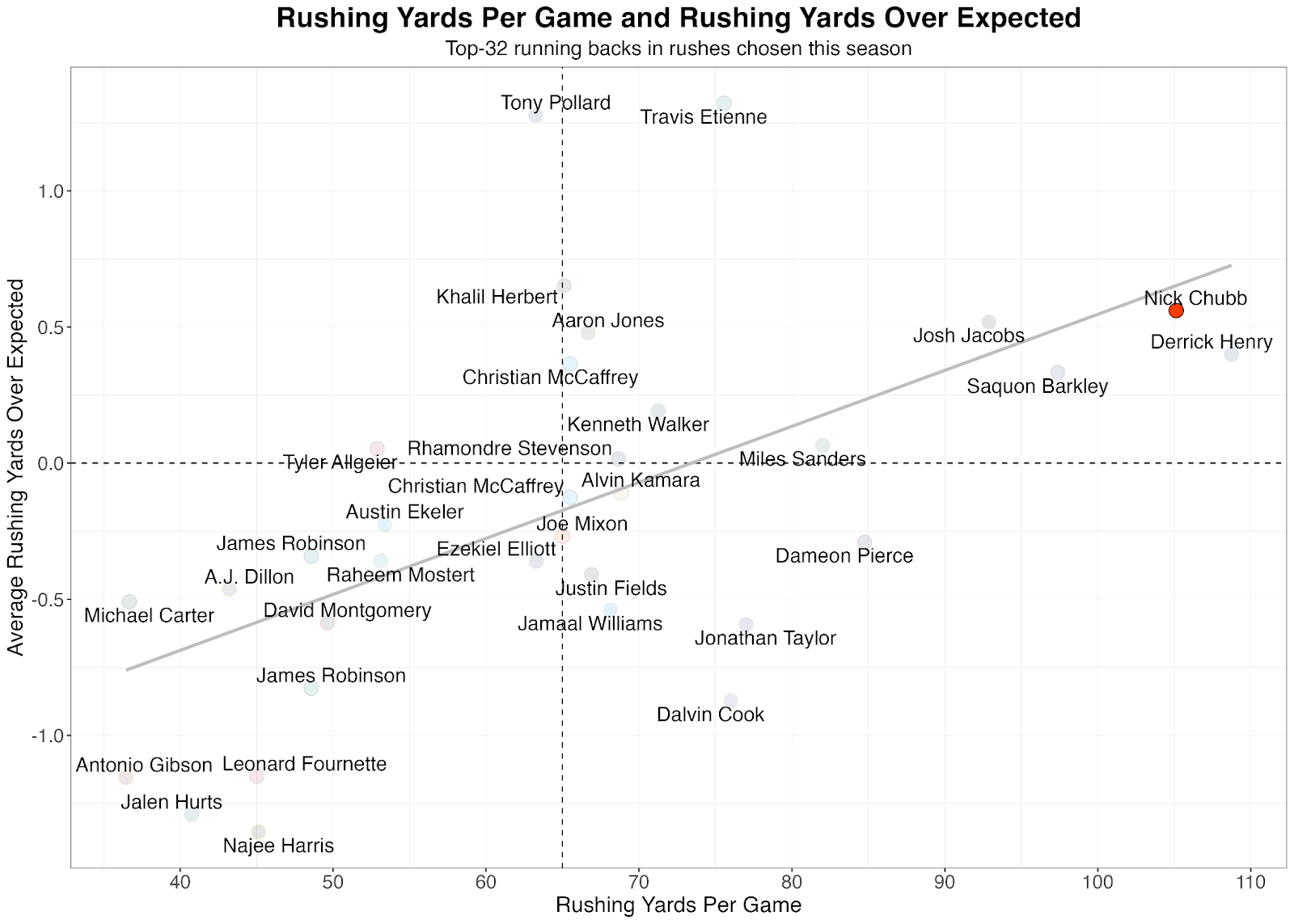 • Tennessee Titans RB Derrick Henry currently leads the league with 870 rushing yards: But Browns RB Nick Chubb is right behind him (841). While both rushers are among the NFL’s elite at their position, Chubb has been more effective based on Rushing Yards Over Expected the past two seasons. Given how RYOE is a good indicator of future success, we expect Chubb to close the gap and surpass Henry by season’s end. Take the +250 odds now.

• Longshot worth firing in RB futures market is the Jacksonville Jaguars‘  Travis Etienne (+2800): He currently ranks 5th in the NFL in rushing yards, behind Henry, Chubb, Saquon Barkley and Josh Jacobs, yet Etienne the 10th-shortest odds on DraftKings. He is 2nd in the league in RYOE, showing a rare combination of explosiveness and shiftiness this season. Without James Robinson in Jacksonville, Etienne has taken on a bigger role, and although he is currently 190 yards behind Henry, potential injuries to others coupled with Etienne's big workload make him a longshot worth consideration. 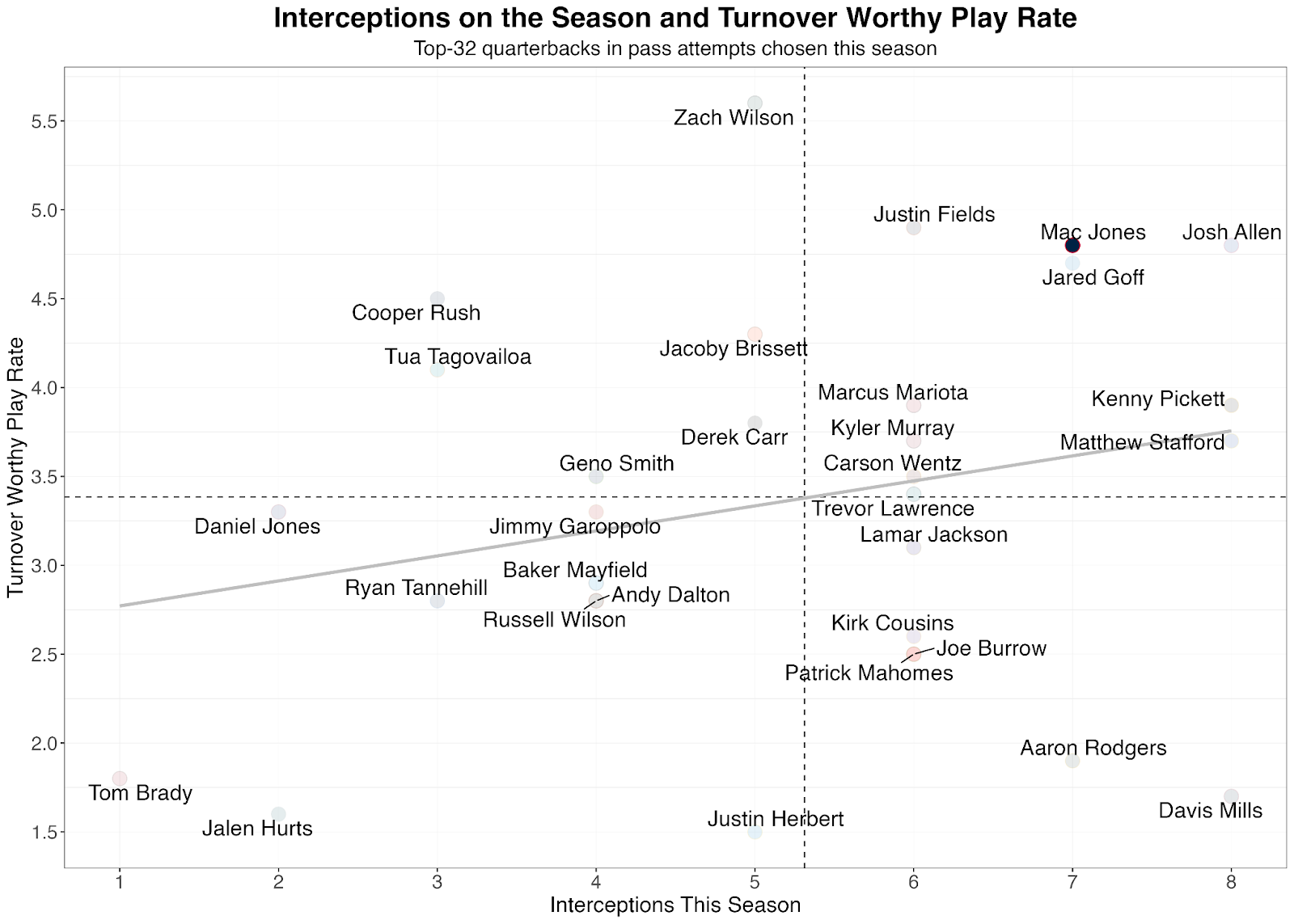 • With 7 interceptions, Mac Jones is behind four quarterbacks who have 8: However, Davis Mills, Matthew Stafford and Kenny Pickett all have a 3.9% Turnover-Worthy-Play rate or less charted by PFF, and Josh Allen has shown he’s capable of taking better care of the football.

• Jones' 4.8% TWP rate: Shows that he's been lucky and should have more interceptions. As the season goes on, we can expect Jones — who has thrown interceptions per pass attempt at the 2nd-highest rate in the league — to have some regression to the mean and end up with the most interceptions. 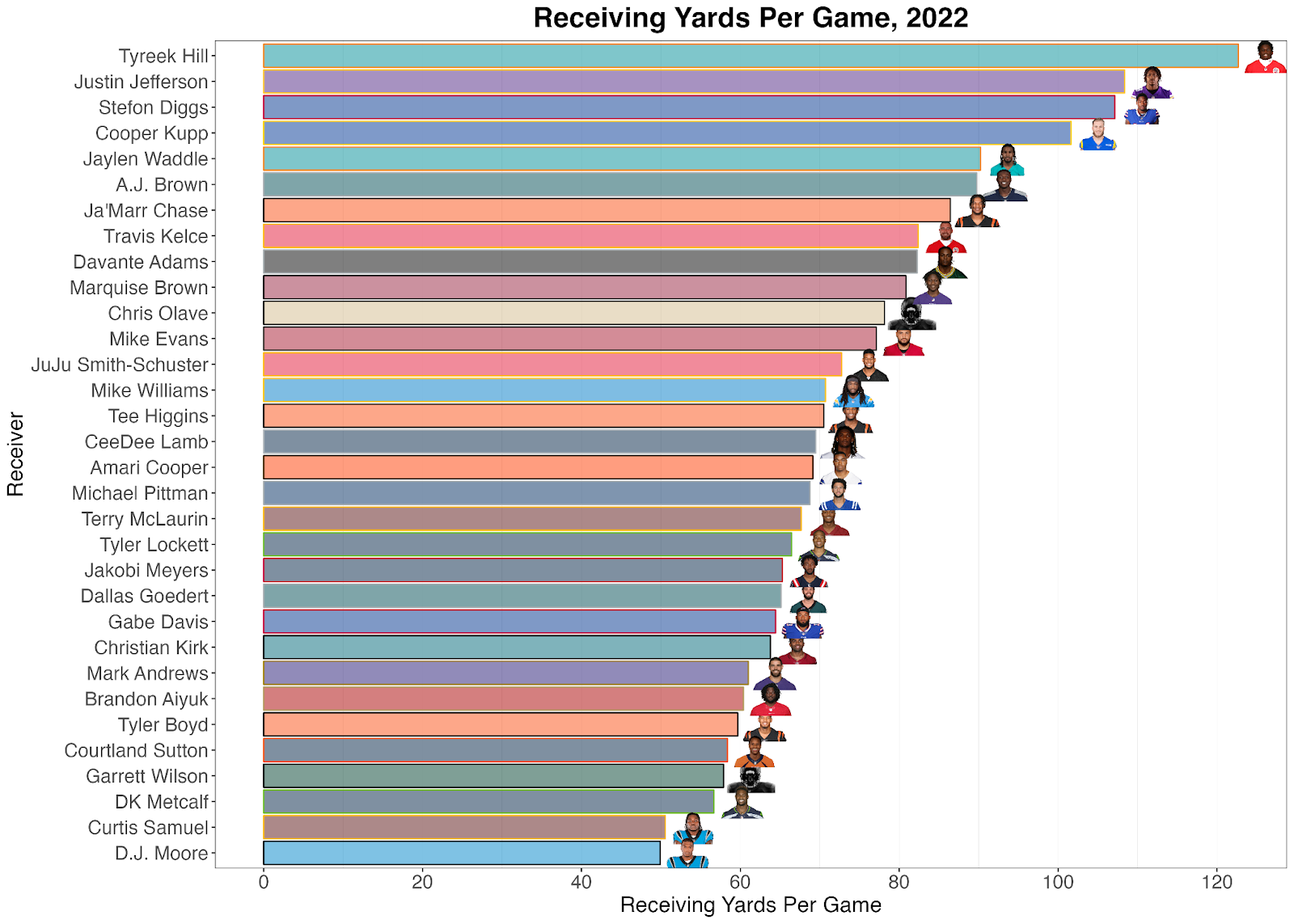 • Even as the heavy odds-on favorite at +100, Tyreek Hill still has value: Sitting at 122.7 receiving yards per game, Justin Jefferson is the next closest at 108.4. Hill hasn’t had his bye yet but even despite that he is up 237 receiving yards on 2nd place meaning he could sit out an additional game on top of his bye and still be leading the league in receiving if everyone else were to keep the same pace. Because of the sheer amount production he’s had early and how we can expect it to remain stable given his past performance, Hill is the best bet to lead the league in receiving yards

• Longshot worth firing in WR futures market is the Philadelphia Eagles' A.J. Brown (+2000): He currently ranks 3rd in yards per route run, behind Hill and Stefon Diggs, yet Brown has the 7th-shortest odds to lead the league in receiving yards. If the Eagles play more tight games down the stretch, Brown will stay in the game longer and could potentially leapfrog other receivers.