What the advanced analytics say about Bears QB Mitchell Trubisky

We’re knee deep in the offseason abyss. Free agency has mostly come and gone, the draft a distant memory. Training camp is more than a month away. Let’s face it, there’s not a whole lot of new data and information to analyze.

Which brings us to the curious case of Mitchell Trubisky, a quarterback whose play is as polarizing as it comes. After years of post-Jim McMahon musical chairs at the position, the Chicago Bears finally thought it had found a solution at the position in Jay Cutler in 2009, only to be disappointed by what ended up being only one playoff appearance with him at the helm. So in 2017, they traded up to take Trubisky out of North Carolina, where he had failed to start over AAF backup quarterback Marquise Williams until his final season in Chapel Hill.

Understandably, Trubisky struggled in Year 1, failing to complete over 60% of his passes and throwing as many interceptions (seven) as touchdown passes. In a 2017 season that saw many injured quarterbacks and a generally down year offensively, the Bears were only 25th in expected points added on passing plays in Trubisky’s rookie year, even though the rookie was effective when he scrambled on said plays.

Out with John Fox and Dowell Loggins, in with Matt Nagy. Chicago's passing offense took encouraging steps in Trubisky’s second year, earning the league’s 12th-best expected points added on passing plays (and ninth in Trubisky’s 14 starts). The quarterback’s box score statistics looked very impressive, as he completed almost two-thirds of his passes, threw for twice as many touchdowns (24) as interceptions and ran for another 421 yards.

However, we think this offensive production is likely in spite of Trubisky rather than because of him. During the course of 2018, we would tweet out graphics showing per-dropback PFF grades versus the expected points added by a passing offense, and Trubisky’s grade simply did not stack up to the production the offense was generating. 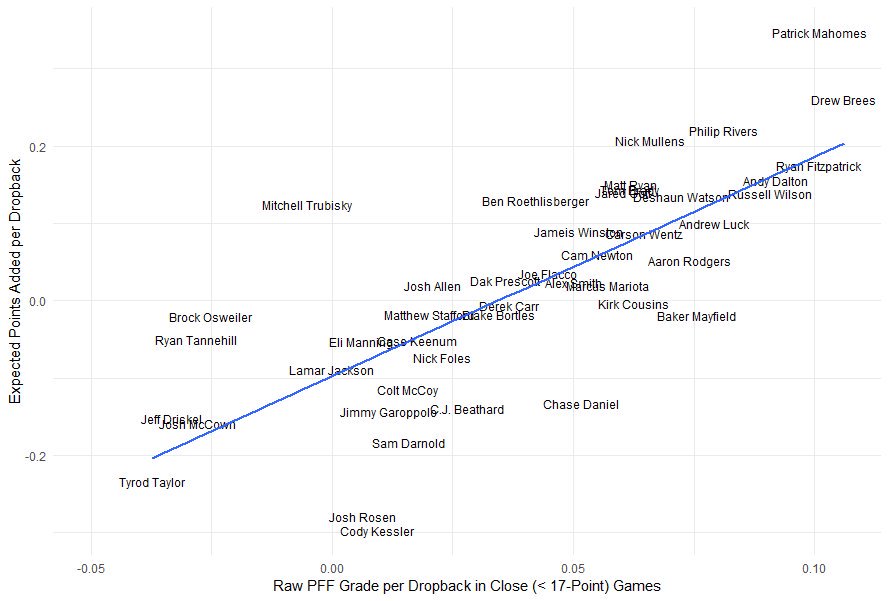 He ranked 32nd among passers in PFF grade from a clean pocket and 35th in percentage of dropbacks that earned a negative grade. The latter variable is the most stable we have when evaluating quarterbacks and is one from which a player usually does not rebound from one season to the next. He was 30th among quarterbacks in adjusted completion percentage, an accuracy measure that carries when looking at our ball-charting data, where he rated 30th in percentage of throws labeled “accurate” and 31st in percentage of throws labeled “catchable, but inaccurate” (as in he had relatively few of the former and many of the latter).

How could this be? First, it’s pretty clear that Nagy’s influence on the offense was a nontrivial one, covering up for much of the young quarterback’s deficiencies. Using our coaching rankings, he was top-10 offensive play caller from wire to wire in his first year. His main influence on the Bears' passing offense was that, like in Kansas City, Nagy schemed Trubisky open throws at a rate 10 percentage points higher in 2018 than in 2017. In his first (partial) season calling plays for Kansas City in 2017, the notoriously middling Alex Smith led the NFL in passer rating during his age-33 season.

Another thing working in Trubisky’s favor was his supporting cast. Trubisky had clean pockets on over 70% of his dropbacks in 2018 — a top-10 mark at the position — while running back Tarik Cohen earned a top-five wins above replacement value at his position by averaging 2.37 yards per route run — the top mark among running backs. Only ten of Trubisky’s throws were dropped in 2018, the lowest number among quarterbacks who started more than 10 games. 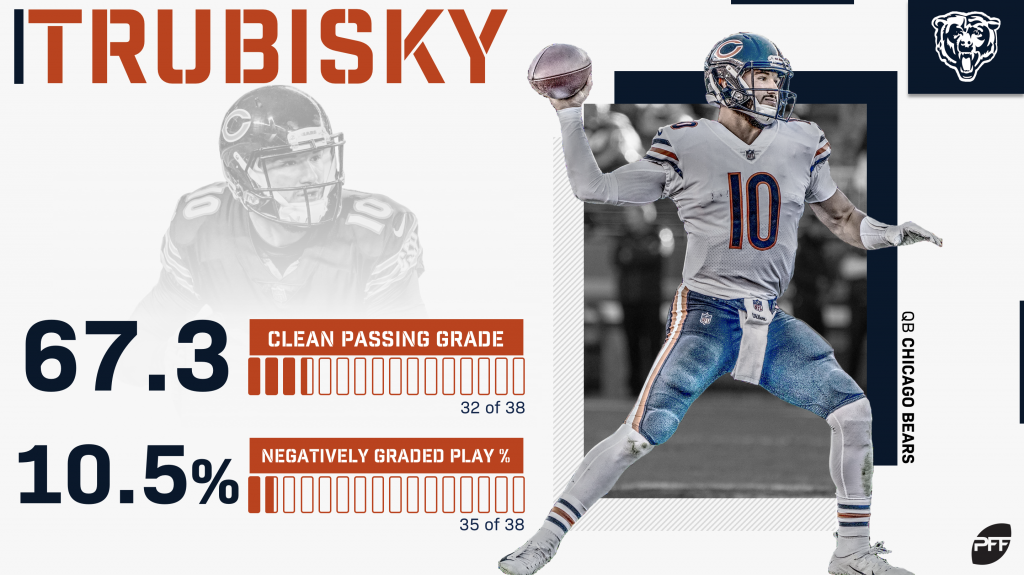 Additionally, Chicago’s biggest deficit when Trubisky played was 14 points in Week 3 against the Arizona Cardinals and Week 7 against the New England Patriots, deficits that were short-lived and rare due to the league’s best defense, meaning Trubisky was playing in an envious, 2017-Bortles-like situation as frequently as anyone.

So, while it’s true the Bears have one of the best rosters in the NFL, with a head coach who appears to be one of the best young offensive minds in the game, we’re very skeptical of Trubisky as a passer in 2019. While it’s possible (likely?) that he makes process-level improvements, namely that he’s more accurate and avoids negatively-graded plays more frequently, it’s probably unlikely that they will be enough in and of themselves to overcome the statistical regression that his data begs. Add in the likelihood that the Bears are not the clear-cut best defense in the NFL in 2019 and things will just be harder for Chicago and their young quarterback. Don’t say we didn’t warn you.