Football is a complex and interconnected game. Offense is more predictive than defense, and the quarterback influences the success of an offense substantially. Be that as it may, nothing in football is purely correlated with anything else. Quarterbacks are enhanced by their supporting casts, and running backs in the running game are almost entirely determined by them. Coverage improves the productivity of the pass-rush, and vise versa.

Even if one could account for all of the interconnectedness inherent between the players on a football field, there’s still some possibly reducible uncertainty remaining, which is that of the ability to coach on the sideline. With analytics having its day in today’s NFL, individual coaching decisions are being scrutinized on a weekly basis – and for good reason. The NFL season is 16 games long, and one poor, high-leverage decision can be the difference between making the playoffs and not, getting a first-round bye and having to play in the wild-card round of the playoffs, or “earning” the number one pick in the draft or having to trade draft capital to acquire it in April.

To that end, we at PFF have developed a metric for offensive and defensive playcallers that accounts for consistent play-by-play variations in the value a team generates, versus what you would expect from them given their team’s PFF grades. Value is measured by expected points added (EPA), while a team’s offensive and defensive strength is gauged using PFF’s version of the popular Massey ratings. We used cluster analysis to keep plays for which there was significant in-game leverage and to throw out plays where there was little variation in coaching quality. Below are some play callers that have stuck out using this metric during the 2018 season, with some commentary on each. 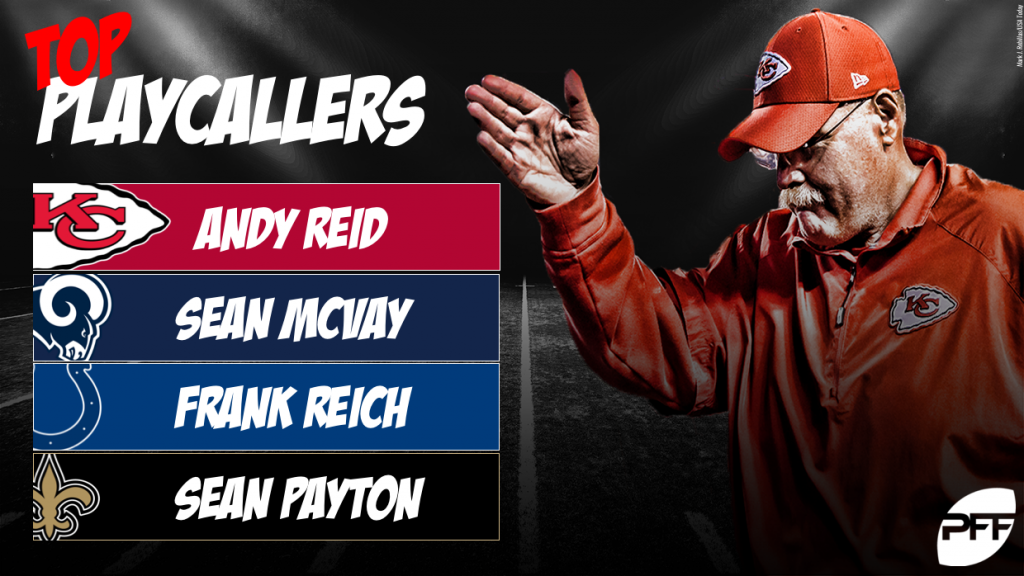 Long lauded for his ability as a playcaller, Reid has really shined over the last two seasons in Kansas City. Despite a quarterback with deep limitations in Alex Smith, the Chiefs finished sixth in the NFL in points scored in 2017 and have simply exploded this season, with second-year signal caller Patrick Mahomes generating the second-most points per game through the league’s first 11 weeks. Injuries to key players like Laurent Duvernay-Tardif, Mitch Morse and Sammy Watkins have not slowed this team a bit, in large part due to Reid’s ability to limit the high-variance Mahomes to a turnover-worthy play rate of just 2.5% of his dropbacks.

The other half of the coaching duo that orchestrated the league’s best game of the season, McVay has to be on any list that includes coaches moving the needle league-wide. In addition to taking Jared Goff from a cluster 6 quarterback as a rookie to a cluster 2 quarterback today, he’s made running the football so easy for Toddy Gurley (1.9 yards per carry before contact) that there are legitimate members of the media that are considering voting for a running back for league MVP. The Rams are one of only three teams in the NFL with positive expected points added in both the early-down passing game and running game, and appear to be an engine to reckon with for the foreseeable future.

As our friend Peter King discussed in his weekly column, the Colts are a new team; utilizing their most-important assets in advantageous ways en route to a possible playoff berth. After a slow start, the Colts have been successful on over 51% of early-down pass plays this year, while Andrew Luck’s passes have netted 0.12 EPA. It’s always difficult to untangle credit – how much of Philadelphia’s success can be attributed to Reich, Pederson, DeFilippo, etc.? It’s looking more and more like Reich was a big part of what happened in Philly, and the Colts lucked into a gem here.

An oldie but a goodie here, as Payton is once again (along with Drew Brees) orchestrating arguably the league’s best offense in a league where offense has never been better. While Brees is the highest-graded quarterback in the NFL, and there’s an argument to be made that Alvin Kamara and Michael Thomas are the league’s best players at their positions, the Saints have dealt with injuries at other spots offensively, and have only accelerated their early-season pace. Each Drew Brees air yard is being converted into 1.27 actual passing yards, which is easily the best rate in the NFL, a testament to a coach being able to make a collection of brilliant players into more than the sum of their parts and create a Super Bowl favorite with just six weeks left to play in the regular season.

Another guy in his first year in a new role, Fichtner has been able to oversee substantial efficiency by the Pittsburgh offense, despite the fact that dual-threat running back Le’Veon Bell has played zero snaps this season, and far more importantly, the fact that Ben Roethlisberger has been a cluster 5 quarterback through the season’s first 11 weeks. The Steelers are fourth in the AFC in early-down efficiency throwing the football and only Drew Brees has faced less pressure than Big Ben (24.3%) through 11 weeks. As the offensive coordinator of one of five teams with more than a 10% chance to win the Super Bowl, Fichtner needs to be a bigger name moving forward.

While the results of the 2018 season thus far have not been as stellar for the most successful member of the Andy Reid tree, Pederson is still offering substantial value as he builds his Eagles offense for the future. Carson Wentz is making a negatively-graded throw on fewer than 10% of his dropbacks, while they are making the correct run/pass decision on two-thirds of their second-down decisions so far this year in close games. Injuries to their offensive line, some fourth-down variance and having to come from behind due to a banged-up defense has obscured what continues to be one of the more well-run offenses in the NFL.

Another Andy Reid disciple makes his way onto this list. No quarterback has had a bigger disparity between process (PFF passing grade) and result (EPA generated on dropbacks) than Mitchell Trubisky, a dynamic that can no doubt be attributed to the upgrade in quality that Nagy has represented so far in the Windy City. This was also true about Alex Smith in 2017, Nagy’s only year of (partially) calling plays prior to 2018. To help Trubisky, he’s using role players like Tarik Cohen (third among running backs in yards per route run), far more efficiently than his predecessors, meaning that if Trubisky turns the corner in this season or the next, watch out for Chicago.

Speaking of the Bears, Vic Fangio was allowed to hold over from John Fox’s staff, due in large part to steering an underrated group during years where offensive struggles kept the Monsters of the Midway an arm’s length away from contention. The Bears are second to the Chargers in early-down passing efficiency allowed (-0.07 EPA per play) with Fangio nurturing standout, homegrown players at each level of the defense in Eddie Goldman (81.7), Leonard Floyd (69.8), Roquan Smith (62.6), Eddie Jackson (92.4), Bryce Callahan (85.1), Kyle Fuller (84.0) and Adrian Amos (76.8), while adding the right pieces in Khalil Mack (89.6), Akeem Hicks (92.1), Danny Trevathan (71.6) and Prince Amukamara (75.3). Defense is hard to sustain, but the Bears have the goods moving forward.

After relinquishing play-calling duties to Mike Vrabel a season ago, Crennel is a sneaky reason why the Texans have won seven-consecutive games and sit atop the AFC South with six games to play. We’ve seen a rebirth in players like Kareem Jackson (87.8 PFF grade) and Tyrann Mathieu (76.3), and a return to brilliance for J.J. Watt (90.5), which has staved off injuries to players like Aaron Colvin and Kevin Johnson. They will always be under stress defensively behind a quarterback that can be as high-variance as Deshaun Watson (15.3% of his dropbacks have earned a negative grade), but to this point they’ve held up and are in the driver’s seat for the AFC South.

In 2013, the year before Mike Zimmer took over the Vikings and their defense, they allowed 30 points per game. In 2017, they led the league in scoring defense, and continue to be one of the league’s best units despite losing players like Everson Griffen, Andrew Sendejo, Mike Hughes and Anthony Barr for significant time due to injuries. Historically a group of players that have not graded up to their reputation in our system, the Vikings defense is a classic example of one with a coach that makes the whole greater than the sum of the parts, able to evolve his approach in a league where all of the advantages are given to the offense. While their ceiling at the quarterback position might always keep the Vikings safely out of the Super Bowl conversation most years, Zimmer consistently creates elite defenses that flirt with being able to overcome said limitations.