Putting points on the board when working inside of the 20-yard line is paramount for offensive success, which is, of course, much easier said than done. Here, we list the league’s best red-zone wide receivers from last season. 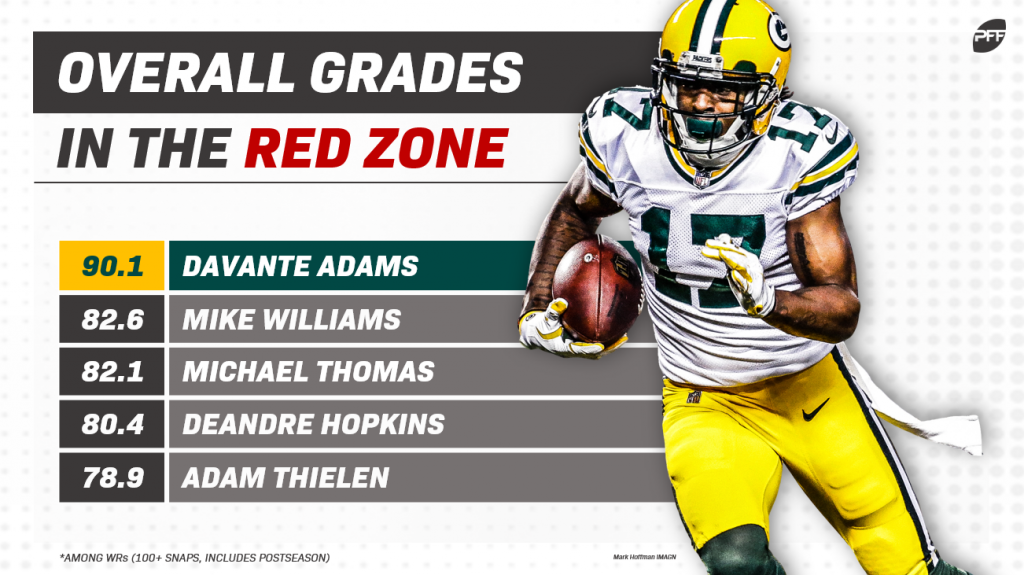 When it came to red-zone production, no other wide receiver came close to the level that Adams displayed last season with his 90.1 overall red-zone grade. In total, Adams brought in 16-of-26 red-zone targets for 149 receiving yards and 12 receiving touchdowns. Though the field shrinks in the red zone, he was still able to remain remarkably efficient with a league-high 1.94 yards per route run. Adams’ 90.1 red-zone grade is the fourth-highest single-season grade we've ever given to a qualifying wide receiver.

Williams may have not quite had the beginning to his career that Chargers’ fans may have hoped for given his first-round selection, but he rebounded in a big way last season, especially in the red zone. He was especially accomplished in the contested catch department. Among wide receivers with 10 or more red-zone targets, only Chris Godwin had a higher contested-target percentage. Of Williams' seven contested targets, he brought in four – tied for third-most contested red-zone catches in the NFL.

If there was a receiving category in 2018, there’s a good chance that Thomas found his name near the top. No one saw more red-zone volume than the Ohio State product; Thomas led the NFL in red-zone targets (34), receptions (27), and yards (171). As it was everywhere last season, the Drew Brees-Michael Thomas connection was lights out in the red zone. He finished among the top-10 players with ten or more red-zone targets in passer rating when targeted (127.2) and catch rate on his targets (79.4%).

As with Thomas, Hopkins was an all-around receiving juggernaut last season and his work in the red zone was no different. Last year, Hopkins brought in 15-of-25 red-zone targets for 140 receiving yards and eight receiving touchdowns. Over the last five seasons, no wide receiver has more targets on endzone fades than Hopkins. That held true again last season, as he led the NFL with four targets on fades. Hopkins caught two of them for touchdowns.

Thielen has emerged as one of the top receiving options in the league, and he rounds out the top-five red-zone receivers from last season. He did at all inside the 20 – catching 79.0% of the balls thrown his way (sixth among qualifying wide receivers), bringing in three-of-five contested targets, and forcing three missed tackles after the catch (tied for second among wide receivers). Get the ball into No. 19’s hands in the red zone and good things happen.