The Thanksgiving slate of NFL games petered out with a slog of a game Thursday night as the Washington Redskins and New York Giants struggled to a game the Redskins ultimately won 20-10.

The Redskins went ahead to stay in the fourth quarter on a touchdown pass to Josh Doctson. The team also got a touchdown from Jamison Crowder, who was the game's leading receiver with 141 yards. For the Giants, the team's only score came on a third-quarter interception by Janoris Jenkins. The team struggled on offense, amassing only 170 total yards on the day.

The Giants offense managed just three points, with the defense accounting for the other seven on an interception return, so the grades on this side of the ball were never likely to be pretty. Engram was thrown at seven times, but dropped almost as many of those passes (two) as he caught (three), while also struggling to block on the edge against Washington's stronger defenders.

Flowers has been playing better over the last month when it comes to pass blocking in particular, but when Washington was able to deploy Junior Galette late in the game in passing situations, Flowers was taken into deep water and couldn't keep up. He surrendered a sack and two hurries, but he was also flagged three times in the game for holding, two of them being declined.

Collins was the best defensive player on the field for the Giants this game, constantly making plays all over the field. He had a team high 11 tackles, 5 of which were solo defensive stops. He wasn't beaten at any point in coverage, and saw zero targets as the primary cover man. Collins finished with a coverage grade of 83.0 to go along with his run-defense grade of 88.5.

It was pretty clear watching this game that Harrison was taking over in the middle for the Giants defense. While he did have three quarterback hurries rushing the passer and a grade of 77.8, as usual it was his run defense that made the difference. Harrison finished with an 85.3 run-defense grade thanks to two solo stops and countless plays in which he completely blew up the play. Harrison was the biggest reason that the Redskins switched to a much more effective outside zone-rushing attack in the second half.

Despite an injury scare, Crowder took over in the second half for a Redskins offense that was having some trouble moving the football early on. Crowder was targeted nine times and caught seven of those 141 yards and a touchdown. He could've had an even higher grade if not for a dropped pass on one of those incompletions. Six of his seven receptions went for a first down or touchdown and he averaged 5.64 yards per route run.

Much like Crowder and the rest of the Redskins' offense, Perine didn't really get going until the second half. But once he did he was impressive. While he only forced two missed tackles and had an elusive rating of just 25.9, Perine impressed with his ability to avoid being taken down without getting a few extra yards. Perine gained 56 yards after first contact in the game, most of which came in the second half when the Redskins pulled away.

Kerrigan was a monster throughout the game, notching three sacks of Eli Manning, but also adding four additional hurries and making an impact in the run game, in particular working against the Giants tight ends, driving Evan Engram inside to force a cut on one play.

The Redskins defense had the number of the Giants offense all game long, and while several players contributed to the success, there were a few notable standouts, of which McGee was one. He ended the game with two defensive stops, but was consistently causing run plays to break down with his defeating interior blocks at the line and forcing cuts by the Giants backs. 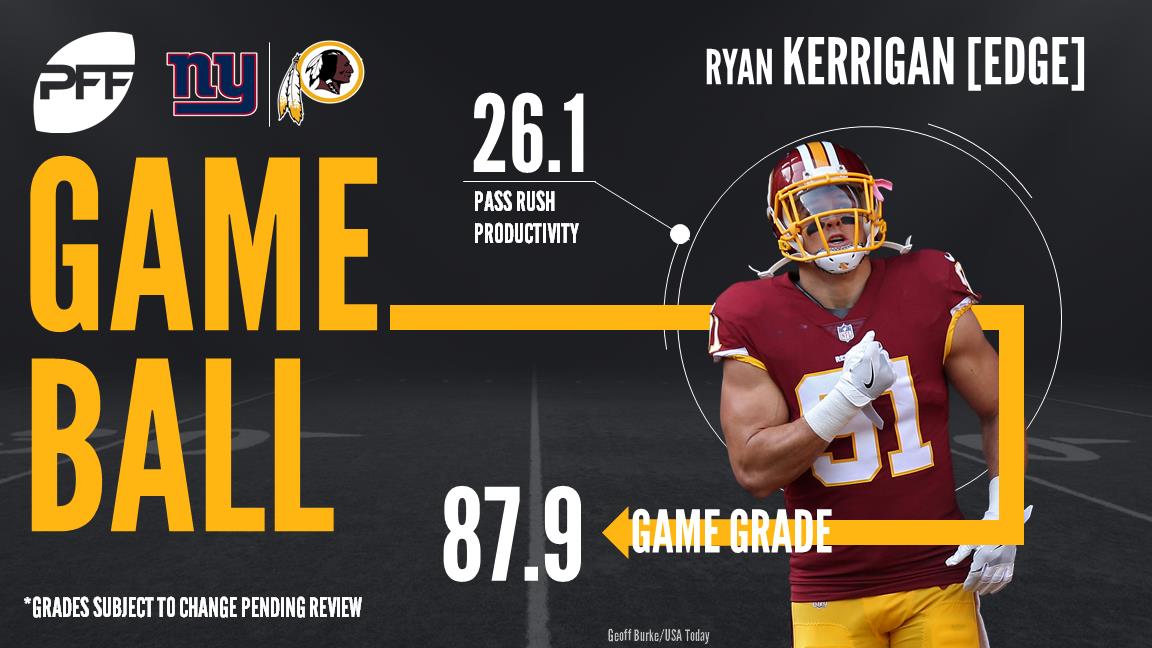