Expected points (EP) sounds a little scary. Just the word expected followed by a number that extends past the decimal point is enough to send most heading for yards per attempt or yards per play if they are feeling a little edgy. Lump in the fact that EP can be negative, and we’re really pushing the limits of human numeracy in 2019.

So why bother? This is probably best described with an example: Imagine a five-yard run by your favorite running back — how valuable was that run? If you’ve been watching fantasy football for too long, you might say it is half a point, but in the real world, you don’t have enough information to say how valuable that run was for his NFL team. The reason is that a five-yard run on third-and-15 at the 50-yard line isn’t very valuable, while a run of that same five-yard distance on third-and-four at the 35-yard line is quite valuable. You can imagine how frequently context matters in the game of football and expected points aims to alleviate this issue.

Put very simply, expected points is the expected number of points the offense should expect to score on the next scoring play given the down, distance and field position. The reason for the decimal values is simple: the expected value should be thought of as the average over the course of a long period of time or many events. The average number of points we’d expect to score on first-and-10 at the 25 must take into account the chance you score a touchdown or a field goal and the chances your opponent scores a touchdown or a field goal before you do (now you should be able to imagine how the negative values might show up, hint: what do you think happens when you’re at your own one-yard line…). Expected points is the value of the current game state from the perspective of the offense.

The obvious next step is to compare the value of the game state (EP) both before a play and after it. Remember the five-yard run on third-and-four? Say your expected points on third-and-four is 2.3 points, after the five-yard run you are now on first-and-10 at the 45, and the EP at that state is 3.5, what would you say the value added on that run was? Before the run, you were expected to score 2.3 points on the next scoring play, and now you are expected to score 3.5 — that run added 1.2 expected points or what we call EPA (expected points added). Concretely, EPA is a measure of the value of a play that takes context into account and thereby better measures efficiency at the play level.

The Cardinals' offense was a disaster last season, and that's putting it nicely. Rookie quarterback Josh Rosen struggled mightily behind a pass-blocking unit that allowed pressure at the NFL's second-highest rate, and outside of the ever-reliable Larry Fitzgerald and some promise from rookie Christian Kirk, the playmaker department was severely lacking. That being said, the passing attack was overhauled this offseason with the additions quarterback Kyler Murray and the two draft-eligible wide receivers with the most deep receiving yards in college football last season (Andy Isabella and Hakeem Butler). Expect the Cardinals to rise in the ranks in 2019.

Coming out of college, Josh Allen’s athleticism and natural ability to throw the football garnered first-round interest. As of now, though, the simple truth is that he is not an accurate passer of the football. Anytime that you throw for more interceptions than touchdowns, the team’s EPA per pass play is likely going to end up near the bottom of the league, which the Bills did. However, one area in which Allen did succeed when dropping back was as a runner on quarterback scrambles. His rushing grade on scrambles trailed only Mitchell Trubisky, and his 508 rushing yards on scrambles led all quarterbacks.

The Jets didn’t exactly provide Sam Darnold the optimal conditions to succeed in his first season. He was pressured on 35.9% of his dropbacks (10th-most), and his supporting cast didn’t particularly impart fear on opposing defenses. He started to figure things out late in the season though, picking up the highest grade of any quarterback in the league over the last four weeks of the season. With the additions of Le’Veon Bell and Jamison Crowder along with another year of familiarity with Robby Anderson and Quincy Enunwa, the Jets will look to improve the passing game next season.

The Dolphins' options at quarterback consisted of Ryan Tannehill and Brock Osweiler. Their ranks in overall grades among 38 quarterbacks with at least 200 dropbacks were 38th and 35th, respectively. If your quarterbacks are performing at a level that low, it should come as no surprise to find yourself near the bottom of teams in EPA per pass play. They addressed the position this offseason by bringing in the bearded-wonder and journeyman Ryan Fitzpatrick and trading for the second-year quarterback Josh Rosen, who disappointed in his first season with Arizona albeit in less than ideal conditions. Even with the change under center, it remains to be seen if the Dolphins will be able to improve next season with a wide receiver corps consisting of DeVante Parker, Kenny Stills and Albert Wilson.

The Blake Bortles era has come to an end in Jacksonville, going out on a dull note with a bottom-five offense in EPA per passing play. With him posting just a 13:11 TD to INT ratio, a 79.8 passer rating and 6.7 yards per attempt, there wasn’t much that impressed or that would indicate a successful passing offense of any kind. Nick Foles comes to the Jaguars fresh off a 76.6 overall grade that was the highest of his career outside of a 78.2 overall grade in 2013. They’ll be hoping he plays closer to his 2017 postseason form, though, when he recorded consecutive 90.0-plus grades in the NFC Championship and the Super Bowl.

No team suffered more attrition at the quarterback position than the Redskins last season, as Alex Smith, Colt McCoy and Mark Sanchez were all lost to injury over the course of the season, forcing Josh Jackson to close out the season by throwing his first regular-season pass attempts since 2011. Upheaval at quarterback to that degree is a guaranteed way to derail a passing offense, and the Redskins found that out the hard way. Assuming that Dwayne Haskins earns the starting job at some point this season, it is critical that the Redskins provide him with a clean pocket to work from. His 90.4 clean-pocket passing grade at Ohio State dropped to 56.7 when he was pressured.

It’s easy to attribute Marcus Mariota’s struggles last season to the elbow injury that affected him late in the season, but looking at a larger sample, Mariota has struggled from a clean pocket throughout his career, indicating it may be time sooner rather than later for the Titans to move on. Since 2015, Mariota hasn’t ranked above 22nd in grade from a clean pocket, and his 19 interceptions from a clean pocket since 2017 are the most in the NFL. That being said, Corey Davis did take a step forward last season, improving his grade from 63.1 in 2017 to 76.4 in 2018, and the Titans added A.J. Brown via the draft and Adam Humphries via free agency. There is reason to believe the Titans can be better than a bottom-seven passing attack in 2019. 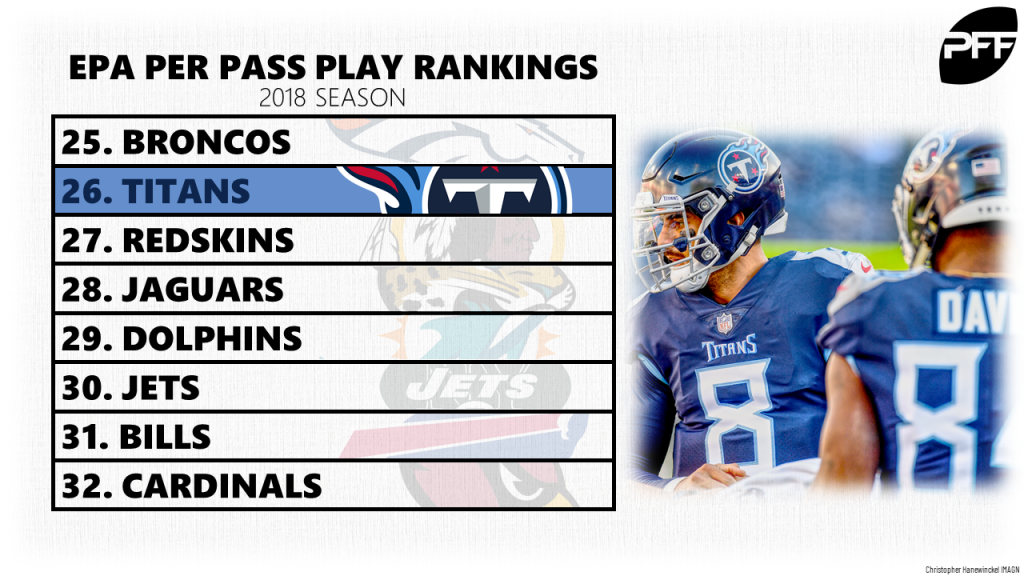 Case Keenum was not able to replicate the success he saw in 2017 with the Minnesota Vikings in Denver last season. He was careless with the football, as his fifteen interceptions were tied for second-most in the league, and he didn’t make the big plays necessary to offset them. Keenum averaged just 6.6 passing yards per attempt – fourth-worst among quarterbacks with 200 or more attempts. The offense will have a new look next season with Joe Flacco at the helm and Drew Lock waiting in the wings, and one of them will have to prove to be an improvement over Keenum in order for the offense to take a step forward next season.

The Raiders mark the turning point in this list — the 23 teams above them all produced a positive EPA per pass play in some fashion, while the Raiders and the eight below them all failed to produce a positive EPA per pass play. Derek Carr has taken a couple big steps back from his 85.3 overall grade in 2016, failing to record an overall grade above 75.0 in the two seasons since. Continuing the theme of offenses keeping the passing game close to the vest, his 7.1-yard average depth of target was tied for the lowest in the league with Matthew Stafford. Since last season, the Raiders have invested resources into bolstering the deep passing attack, trading for Antonio Brown and signing Tyrell Williams and JJ Nelson in free agency.

Out of the teams in this bottom-third of the list, the Vikings are likely the most surprising to many. They have one of the highest-paid quarterbacks in the league in Kirk Cousins and arguably the best one-two wide receiver punch in the NFL in Stefon Diggs and Adam Thielen. Despite that, they come in at just 23rd on the list. Cousins was generally more effective than Dak Prescott, but looking at metrics like average depth of target (both at 7.9) and yards per attempt (7.1 for Cousins compared to 7.4 for Prescott), the two were fairly similar. Value is ultimately added by picking up big chunks of yardage, so when you opt for a quick, short passing game, it limits the margin for error.

Dak Prescott is eyeing a new contract of his own after the recent extension given to his NFC East rival, Carson Wentz. However, after coming in at just 22nd on the list of offenses in EPA per pass play last season, the Cowboys will need to improve their passing attack to make what will likely be a hefty extension worth the money. There simply were not enough big plays made in the passing game to elevate them on the list. Prescott only completed 78 passes that traveled ten or more yards in the air, ranking 20th in the NFL. He also took 56 sacks which ranked behind only Deshaun Watson and contributed to keeping down the EPA value. 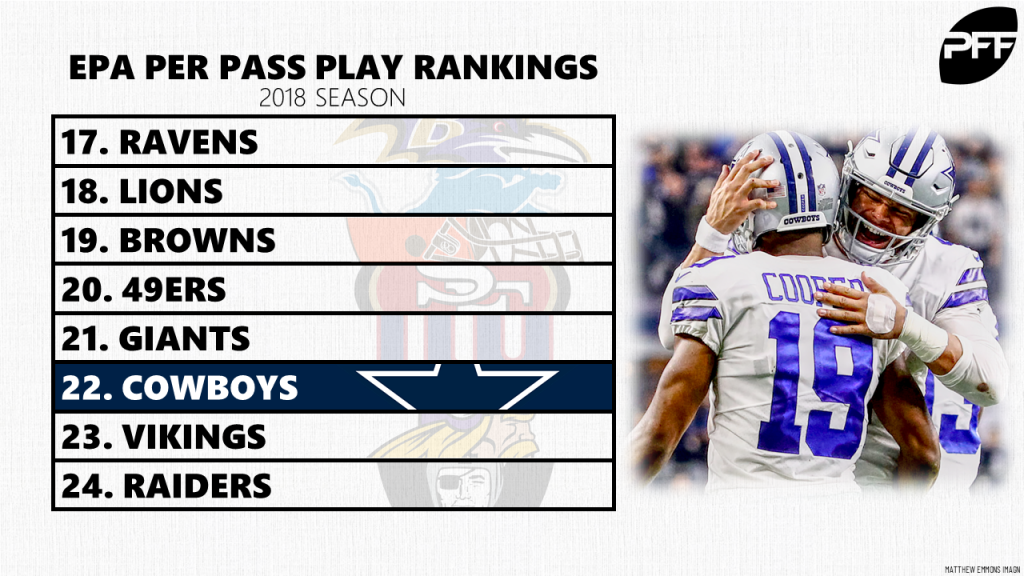