Anytime an NFL roster holds a future Hall of Fame quarterback, yet Drew Brees isn't the most anticipated member of that roster for fans to get their first glimpse at for a given season, your roster is in good shape. The New Orleans Saints are that team this season as Brees once again headlines the returning cast of characters in the Bayou. Brees finished the 2017 season as the league's most accurate quarterback, throwing for a league-high 80.7 adjusted completion percentage.

However, several other key pieces returning to New Orleans this summer are grabbing headlines this offseason. Alvin Kamara enters camp on the heels of his phenomenal 2017 season. You can say the same of the former Ohio State duo, second-year cornerback Marshon Lattimore and rising third-year wide receiver Michael Thomas. Patrick Robinson rejoins the team after putting forth his best season as a pro, and the league's top coverage grade in the slot with the Philadelphia Eagles last season. Either way you look at it though, this roster is packed full of talent and skilled playmakers across the board – so what are the burning questions as we enter training camp? 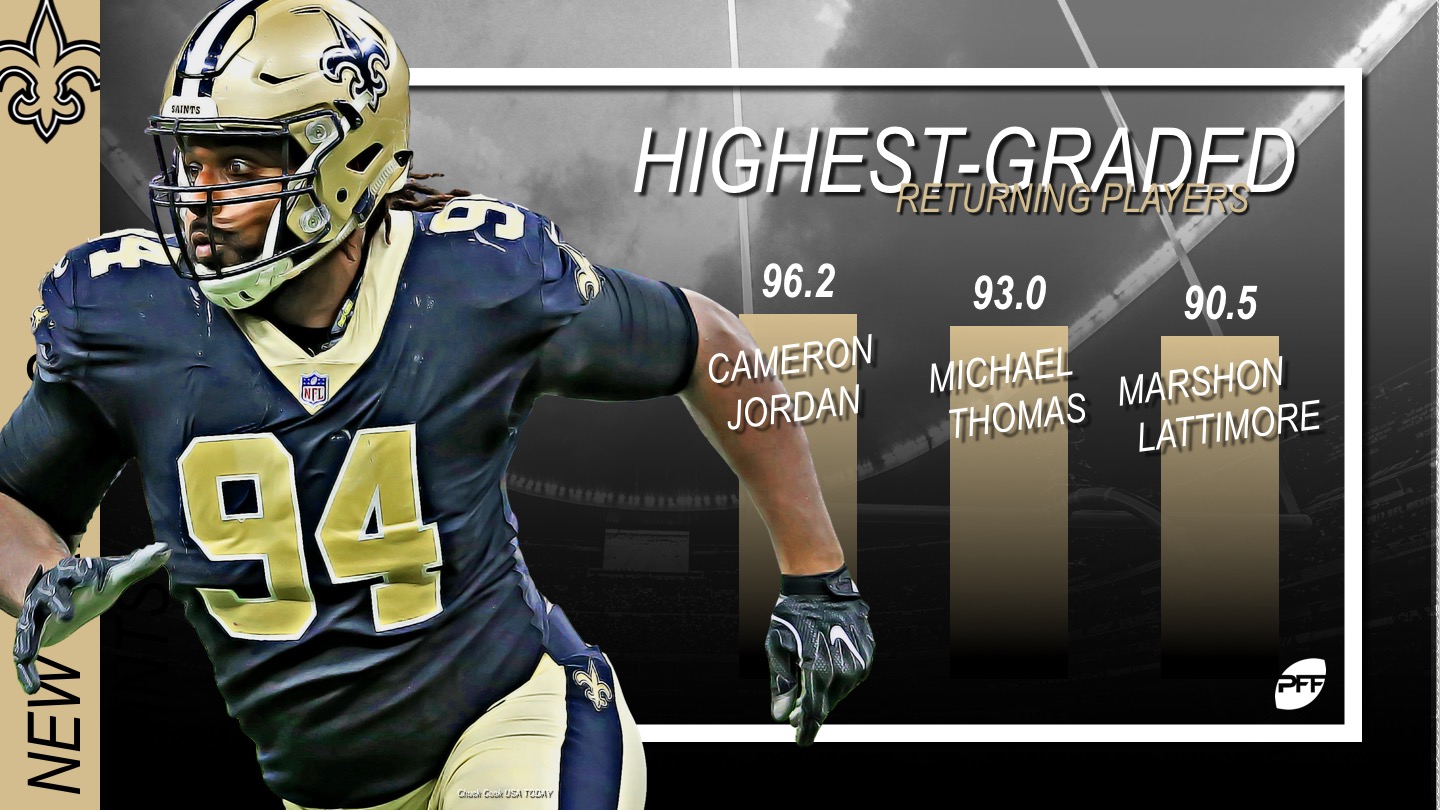 The Saints will have the services of several players who either spent some or all of the 2017 season rehabbing or treating injuries. Wide receiver Cameron Meredith joins the fold having missed all of last season with a knee injury. He hauled in 66 receptions on 95 targets in 2016 for a 99.8 passer rating when targeted. He finished second in the league that year, with a 70.0 percent catch rate on deep targets as Meredith hauled in 7-of-10 deep passes for four touchdowns, the fourth most of any receiver.

Offensive lineman Andrus Peat also returns from injury after he suffered a broken fibula during the playoffs and appears on track for a return. Alex Okafor and Trey Hendrickson also appear to be returning from injuries as Okafor was on pace for a tremendous season before he tore his Achilles. He recorded 30 QB pressures and 32 defensive stops on just a total of 486 snaps in 2017 prior to the injury. Hendrickson logged 281 snaps yet finished fifth on the team in total QB pressures, proving his college success was no fluke as he showcased his pass-rushing skillset before an ankle injury.

Can the starting LBs hold up their end

The Saints are certainly loaded in the secondary as is their defensive line, so if there is any weak spot when looking at this defensive roster on paper, it's arguably their linebacking corps. Both Alex Anzalone and A.J. Klein return from injury as Anzalone earned the starting spot in his rookie season before a shoulder injury sidelined him for the year. Klein finished the season on injured reserve with a groin injury but seemed far removed from his career-high 77.0 overall grade he put forth in 2015. Klein missed 14 of his 60 total tackle attempts in 2017, something he'll have to tighten up this season. The wild card in the Saints linebacker corps is newly-acquired Demario Davis.

The six-year pro Davis is on the heels of a career year, earning an 87.3 overall grade and finishing eighth at the position. Davis racked up 127 total tackles, missing just 10 on the season and recorded a team-high 65 defensive stops for the Jets. He also made a splash as a pass-rusher, albeit on limited snaps. He rushed the passer just 146 times and recorded 28 total QB pressures. 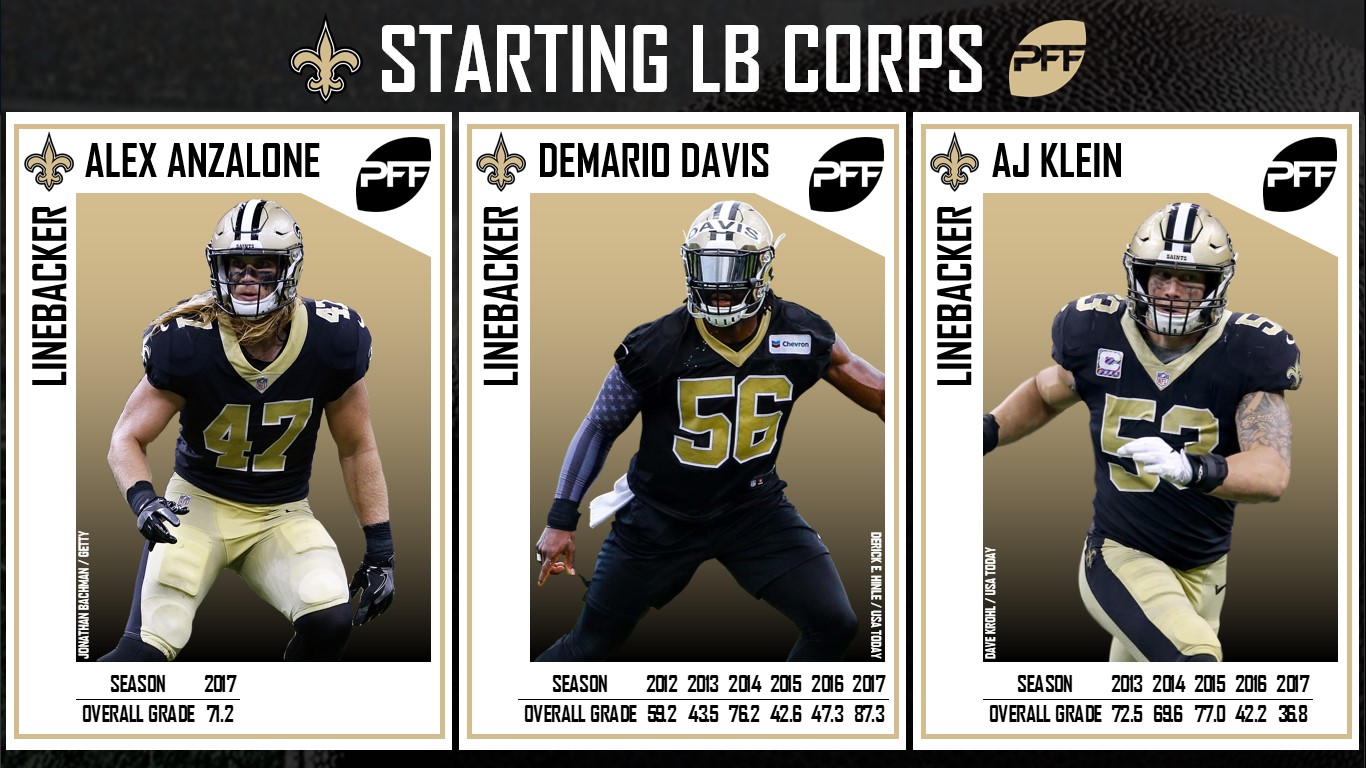 Overall, the Saints are seemingly in good shape. Their offensive line found themselves in the top 10 of our preseason offensive line rankings, clocking in at No. 6. Kamara returns to man the ship in the backfield, although the Saints will be without the services of Mark Ingram for the first four games as he serves a suspension for PEDs. Thomas continues his ascension among the league's top receivers and is joined by rookie Tre'Quan Smith from UCF. Brees should remain one of the league's top quarterbacks and a lock for the Hall of Fame whenever he does decide to hang up the cleats.

Until that happens though, no one can count out a Saints team with No. 9 under (or behind) center.