After Week 2, PFF Greenline is off to a good start, posting 53.8 percent against the spread, 63.6 on totals and 70 percent on moneylines. Our printed picks went 2-3 last week, with our three favorites (New England, Pittsburgh and New Orleans) failing to cover the number, while our two dogs (Detroit, Tennessee) came back to cover in both cases. On to Week 3 we go.

We are now 15-7-1 on our “Lock of the Week” picks since the start of 2017 (68.2 percent) and will be featured on the Sports Illustrated Gambling Show. The analyses here will involve a point-counterpoint between the two of us, using perspectives that only the PFF grades and data can provide. Follow us on Twitter at @PFF_Eric and @PFF_George, and for some podcast commentary on some of these picks, and the process that goes into them, give the PFF Forecast a listen. 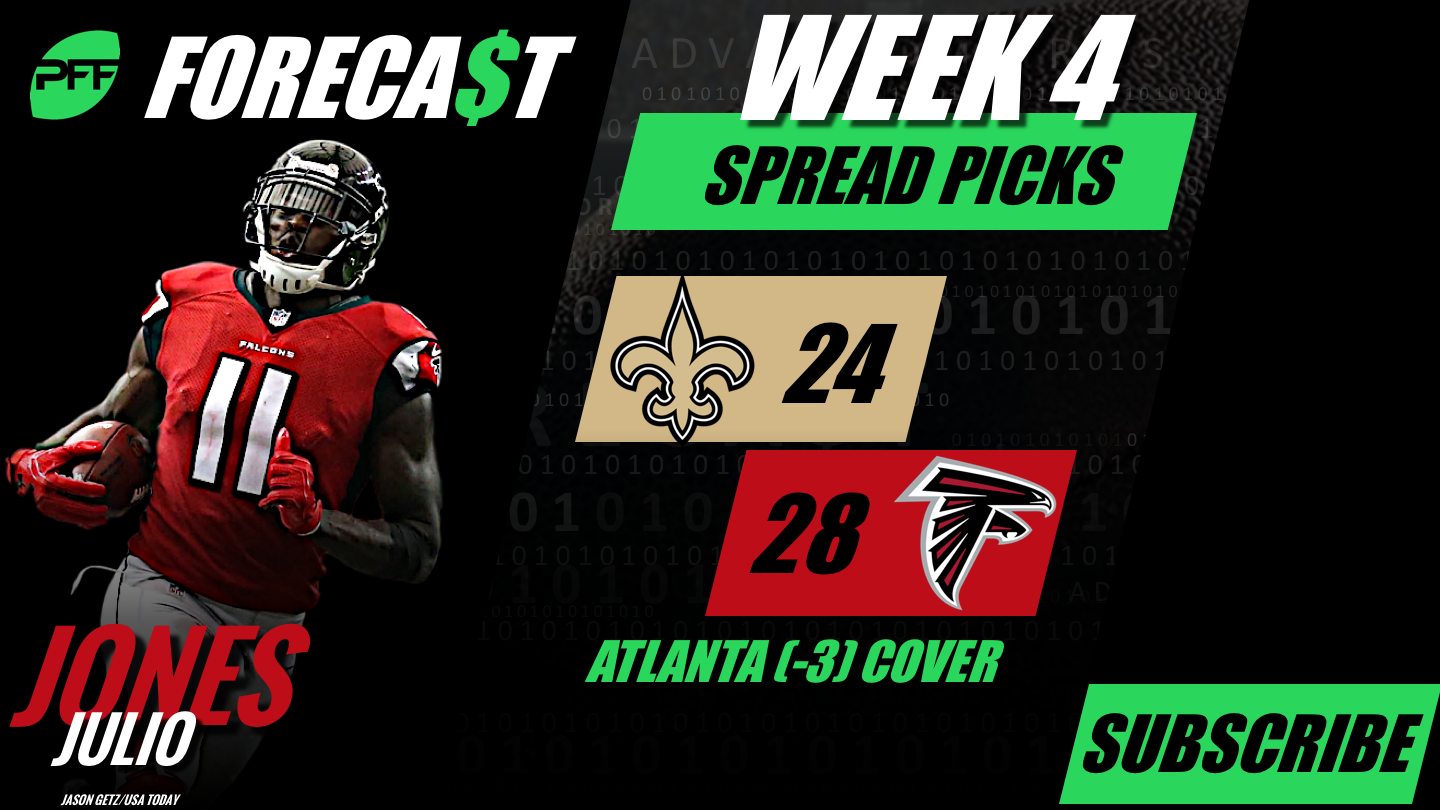 Point (George Chahrouri): The apocalypse of Deion Jones’ season-ending injury came and went, the people lost their minds, there was grinding and gnashing of teeth, the Falcons decided not to throw end-zone fades and the Falcons covered. One of these is more important than the other. Generally betting against Drew Brees in a dome is a losing proposition, he has a 102.6 passer rating in a dome since 2006 which ranks fourth and his PFF grade is third. Here’s the thing, Brees, for all his brilliance, has the biggest dropoff in performance when pressured in said domes among the quarterbacks with a top-five passer rating (112.6 to 71.2). While Brees was under pressure on fewer dropbacks than any other quarterback last season, this year that number is up by 5.2 percent.

The bigger reason to like the Falcons is that they have the most talented passing game in the NFL while the Saints cornerbacks have continued their poor play against the Browns. Marshon Lattimore and Ken Crawley are each allowing a passer rating over 150.0 into their coverage. This is great news for Julio Jones but also for a Falcons offense which rejuvenated their red-zone offense last week and should be able to continue looking to the talented secondary receivers and tight ends against the Saints pass coverage. Falcons by 4.

Counterpoint (Eric Eager): As a member of the PFF Forecast, I’m not allowed to speak ill of the Falcons, but I will say something good about the Saints. Brees has been terrific so far, generating a positively-graded throw on roughly a third of his passes, with his team earning positive EPA on average on his dropbacks. Their offensive line (while giving up more pressure than they did a season ago) is the league’s best, meaning that the pass-rush of Grady Jarrett (11 total pressures in two weeks) et al. might have a more difficult time of it than they did against the Panthers last week, where they forced an 8.8 passer rating from Cam Newton on his 14 pressured dropbacks in Week 2.