The 2018 offseason programs across the NFL kicked off this past week with franchises getting their first field look at the players they drafted in the 2018 NFL Draft. With that came some impressive performances, some even enough to draw praise from their respective coaching staffs.

Here are some of those who received praise in one way or the other this past week, a few of which are PFF favorites from their respective times in college. 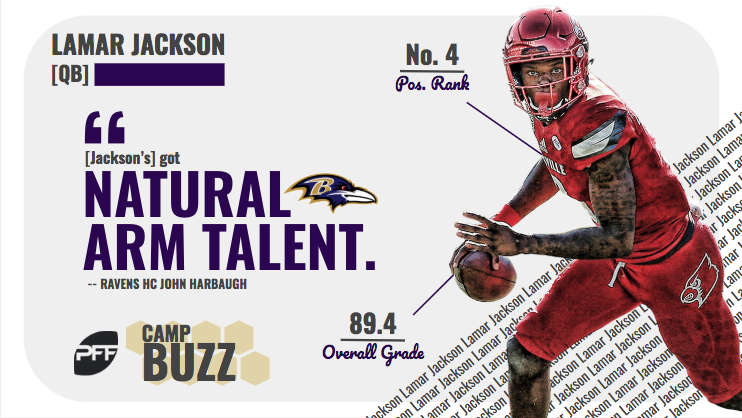 After passing on the famed Louisville gunslinger at pick No. 25, Baltimore Ravens general manager Ozzie Newsome executed a trade to propel back up into the first round and select who he believes to be the team’s quarterback of the future in Lamar Jackson. And if Jackson’s play in rookie minicamp was any indicator, the future is bright in Baltimore.

“The thing that I was really impressed with is I thought he was accurate,” Harbaugh said, per Mike Florio of Pro Football Talk. “You read the reports and stuff like that, but he’s a naturally talented thrower. He’s got natural arm talent. And that’s something that I think people were questioning. So, to see him out here throwing the ball naturally and very accurately I thought was a big plus.”

Jackson’s strong first impression comes as no surprise to us.

While he did have some misses during his tenure with the Cardinals, Jackson proved to have enough arm talent to zip the ball into tight windows and make special throws at all levels in bursts. More specifically, his high-end traits were most evident when facing adversity, as he ranked third in the class in terms of grading under pressure and finished three percentage points above the average in adjusted completion percentage under pressure. He also earned a career-high 89.4 overall grade for his efforts in 2017, ranking second only to the draft’s No. 1 overall selection Baker Mayfield.

Minnesota Vikings’ brass wanted no part in seeing tight end Tyler Conklin land elsewhere on Day 3 of the 2018 NFL Draft, as they shipped a fifth- and seventh-round pick to the New York Jets to move up 10 spots and secure the former Central Michigan standout. And, according to their own team reporter Eric Smith, the move is already yielding positive results.

“Conklin made his presence felt in both 1-on-1 and team drills as he caught everything that came his way,” per Smith. “[He] showed good hang time with a leaping grab while matched up against a linebacker, and also showed speed on a crossing route. He also hauled in a pass near the sideline and later corralled a pass in traffic during team drills.”

The 6-foot-3, 254-pounder has the ideal size-to-athleticism ratio to be a matchup nightmare at the next level, and he proved just that in his most recent year with the Chippewas. In addition to 140-plus offensive snaps at tight end, he played 60-plus snaps at slot receiver and another 241 along the boundary at outside wide receiver.

While drops were a bit of an Achilles heel for him in 2017, Conklin still performed at a high level from an efficiency standpoint. Among all FBS tight ends with at least 50 targets this past season, he ranked tied for third in yards per route run (1.87). He also earned an 81.7 receiving grade. 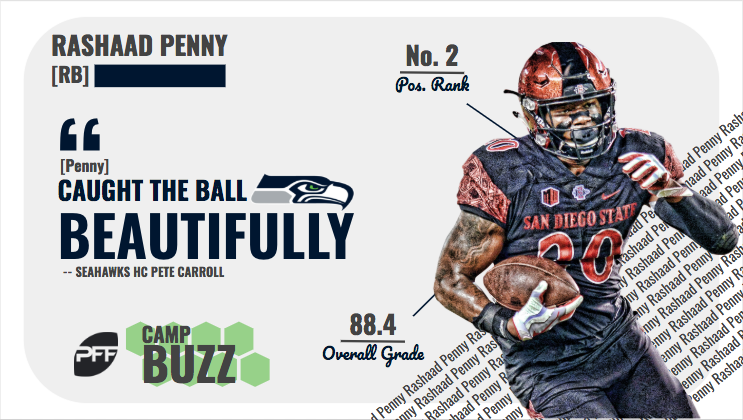 Former San Diego State running back Rashaad Penny already caught the “consensus” off guard when the Seattle Seahawks aligned with our thought process and took him as the second running back off the board with pick No. 27 of the first round. And he’s continued his upward trend through the team’s three-day rookie minicamp, earning positive reviews from head coach Pete Carroll.

“He caught the ball beautifully, really,” Carroll said, according to Gregg Bell of The News Tribune. “He can do whatever we need to do in the throwing game… With a couple of exceptions, he did a really good job. So that’s a real good sign.”

Penny’s limited usage as a receiver within the Aztecs’ offense created sample size issues when evaluating his pass-catching abilities, but there was plenty of good there. In 2017, he caught 18-of-24 targets (one drop) for 129 yards – 126 of which came after the catch – and two touchdowns, earning a 72.1 receiving grade and forced three missed tackles in the process.

With Penny’s upside as a pass-catcher and proven rushing ability, Carroll wants to lean on their first-rounder to be a complete back this upcoming season, which has pushed fixing Penny’s flaws in pass protection to the forefront of their priority list.

“We’re gonna work real hard with his pass protection and make sure that he’s up to speed there,” Carroll said. “We’d like to see if we can make him available to us on all three downs.”

After ranking 118th among the 119 running backs with 58-plus pass-blocking snaps in pass-blocking efficiency (88.3) in 2017, Penny faces an uphill battle in flipping the script in terms of his pass protection. However, if he can continue to impress Carroll in other fronts and improve with proper coaching, he could make some waves in 2018.

In addition to Penny, Carroll spread some love to his seventh-round signal-caller Alex McGough for his play at rookie minicamp, going as far as to call him the “surprise of the day” on Friday.

“I thought Alex did a very nice job,” Carroll said, per the Seahawks’ official site. “He showed really good arm strength. We know that he’s very mobile. He showed a lot of mobility out of him – he got chased a lot last year on film so we know that he can move around and make things happen… Getting him under center was a little change for him but he had an impressive first day so we’re pleased to see that.”

Despite not having the speed and athleticism of some of the other stronger runners in the 2018 quarterback class (Lamar Jackson, Quinton Flowers), McGough earned an 82.3 rushing grade in his final year at FIU and seemingly looked the part this past weekend.

McGough’s success both on the move and under duress, as Carroll referenced above, translated to high-end production during his time with the Panthers, as he finished 11th in the draft class in passer rating while under pressure (81.1) in 2017. And he had similar output running play action, ranking inside the top-12 in completion percentage (65.9) on play-action passes.

Did either of these rookies find a spot in our top candidates for Offensive Rookie of the Year? Check it out now.