Just one preseason game has been played, but long-term injuries have already piled up in the NFL, forcing teams with lackluster depth to turn to the forgotten pool of veteran free agents still looking for work.

The Tennessee Titans most recently lost veteran safety Jonathan Cyprien, a projected starter for the team’s defense, to a season-ending ACL injury. Similarly, the Los Angeles Chargers have been working to recover from season-ending injuries to tight ends Hunter Henry and Austin Roberts in addition to cornerback Jason Verrett over the past week. Having to place the aforementioned players on the Injured Reserve has pushed the Chargers’ brass to consider re-signing 38-year-old Chargers legend Antonio Gates, while the Titans were quick to find their replacement by signing Kenny Vacarro.

Los Angeles and Tennessee already have their hands full, and the other 30 NFL teams aren’t in any position to feel safe from season-ending injuries with four weeks of the preseason yet to be played. Here’s a look at eight names that should – likely sooner rather than later – reenter the fold to fill newly-opened holes in NFL rosters. 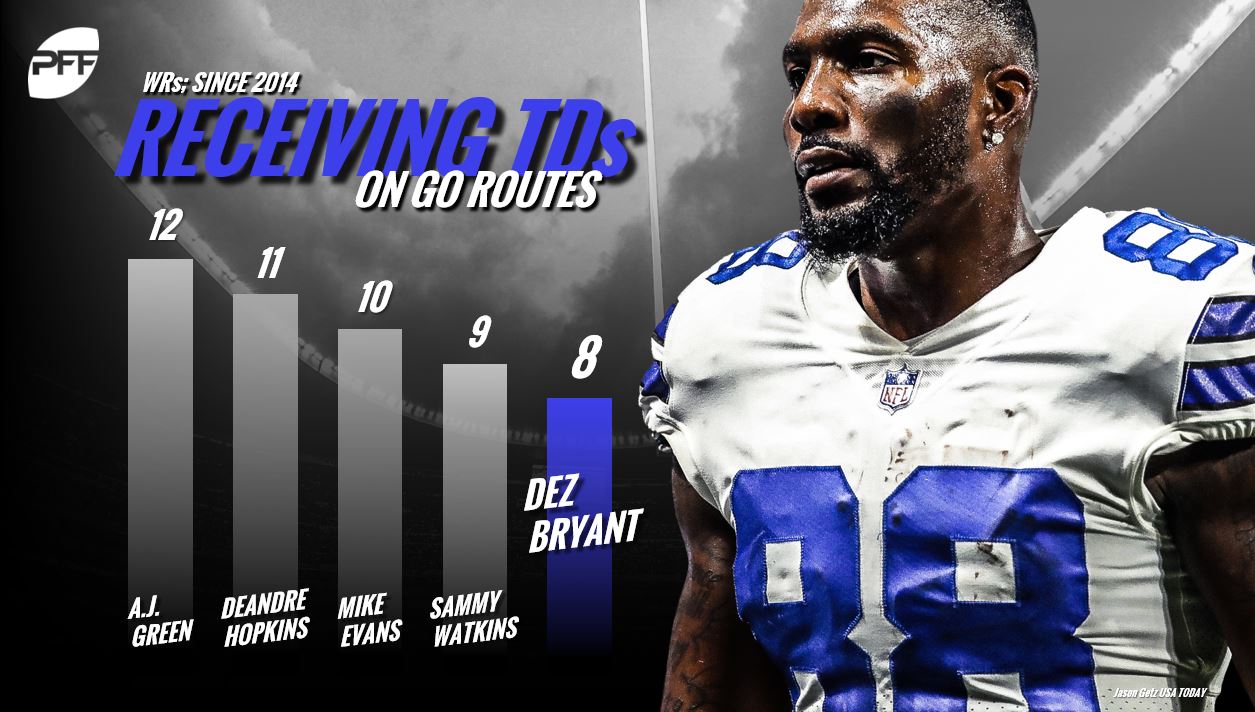 Reported locker room concerns and disagreements between wide receiver Dez Bryant and the Dallas Cowboys led to the eight-year veteran’s release earlier this offseason, and despite his high-end production in previous years, he remains unsigned. Rumors have surfaced that have the Cleveland Browns, Houston Texans and Baltimore Ravens as potential suitors for Bryant, but he has yet to make his decision between the few interested teams.

Bryant earned a 72.7 receiving grade across 569 routes in 2017, which was the second-lowest season receiving grade of his career and ranked tied for 36th among receivers with at least 50 targets. He also averaged just 1.6 yards per route run this past season, ranking tied for 32nd among the same group of receivers.

Longtime Denver Broncos and Baltimore Ravens edge Elvis Dumervil played 341 defensive snaps for the San Francisco 49ers this past season, recording 50 total pressures (34 hurries, nine hits, seven sacks) in the process. The then-33-year-old veteran ranked No. 2 in pass-rush productivity (10.7) and tied for No. 32 in pass-rush grade among qualifiers at the position.

Dumervil hasn’t generated much interest as of late, but if he opts against retirement prior to the start of the season, he will likely come in as a rotational pass-rusher for a team in need in 2018.

Though veteran linebacker NaVorro Bowman had a bit of a resurgence down the stretch of last season with the Raiders, his Achilles heel was evident: coverage. Marred by injuries in previous years, the 30-year-old Bowman has seemingly lost a step since his Pro Bowl days, and his underwhelming speed and athleticism proved to be a liability on passing downs.

Bowman can still carve a role for himself as a two-down run-stuffer, but such usage simply doesn’t have enough value to warrant a contract out of a desperate situation. But, if the current list of injuries is any indication, desperation isn’t too far out of reach for any NFL team.

As previously mentioned, Gates may be on the Los Angeles' short list to replace Henry as the team’s starter in 2018. Gates played 15 seasons with the Chargers and never missed more than 10 games in a season, eclipsing over 11,500 receiving yards and 900 receptions in his career.

Gates’ 2017 campaign, though the lowest in terms of total yards, still had enough bright spots to warrant a return to Los Angeles. He caught 30-of-44 targets for 316 yards and three touchdowns across 16 games, finishing the season with a 66.1 overall grade that ranked tied for 15th among tight ends with at least 30 targets this past year. 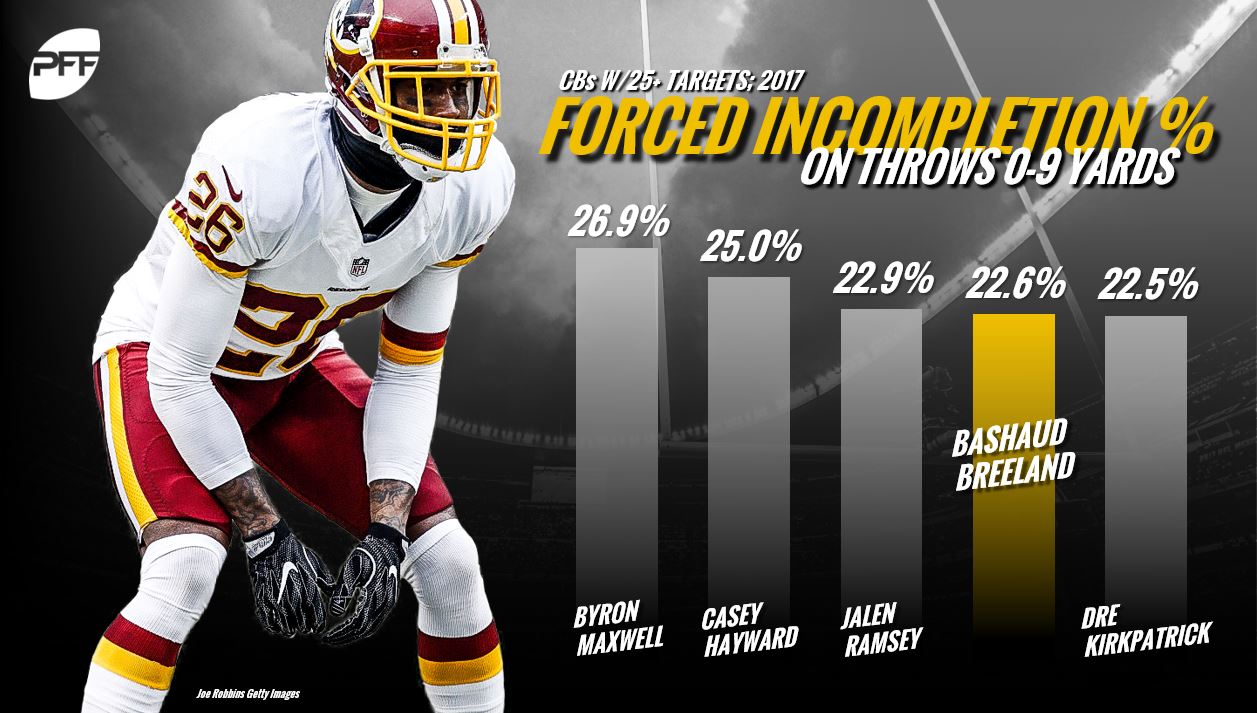 Former Washington Redskins cornerback Bashaud Breeland signed a three-year, $24-million contract with the Carolina Panthers at the break of free agency, but a unique foot injury Breeland suffered in the Dominican Republic caused him to fail his physical and leave Carolina with a voided contract. Though the 26-year-old cornerback has since recovered from the injury and interest has resurfaced, he has still yet to sign onto an NFL roster.

After playing mostly slot cornerback in 2016, Breeland transitioned into an outside cornerback role with Washington for a majority of the 2017 season, as he played 745 of his 856 defensive snaps (87.0 percent) at either left or right cornerback last year. He earned a 72.0 coverage grade in the process, ranking 46th among cornerbacks with 250-plus defensive snaps in 2017.

Veteran safety Eric Reid may be the most-deserving free agent of an NFL contract at this point in the offseason. Reid earned just a 70.3 overall grade – ranked No. 44 among qualifiers – across 410 defensive snaps in 2017, but positional versatility alone should push any safety-needy team to ink Reid to a deal in the near future.

Reid played at least 100 defensive snaps at safety, slot cornerback, off-ball linebacker and edge with the 49ers this past season, a testament to his ability to impact the game positively art multiple levels. He allowed just an 84.4 passer rating and 0.8 yards per coverage snap when lined up in the slot, ranking 16th and tied for eighth, respectively, among defenders with 100-plus slot coverage snaps.

Similarly to Dumervil, former Redskins edge Junior Galette had significant pass-rushing success this past season but has struggled to make his way onto an NFL roster. Galette, of course, was charged with disorderly conduct and failure to comply after being arrested in April of this year, per ESPN’s Mike Triplett, which is likely the leading reason teams are holding back before pulling the trigger on Galette.

The almost-always underrated Robert Ayers may not have brought down a hefty number of sacks a season ago with the Tampa Bay Buccaneers, but he was one of the more consistent edge defenders at getting pressure on the opposing quarterback. In doing so, he racked up a total of 45 QB pressures on his 204 pass-rush snaps, good enough for the 20th-ranked pass-rush productivity among qualified 4-3 defensive ends.

He still remains unsigned despite playing at 350 snaps in every season since 2009 and registering 346 career QB pressures. He logged a career-high 86.9 overall grade last season, proving age was clearly not an issue for him, even as he inches closer to his 33-year-old season.

Other names to watch as free agents available who could still make an impact: