The New Orleans Saints entered the NFL's weekly Thursday night clash needing just one win to secure a playoff berth. Of course, with MVP candidate Drew Brees on pace to record the best grade of his illustrious career and Sean Payton calling the shots for one of the most potent passing attacks in the entire NFL, many thought that the Saints would roll over a middle-of-the-pack Cowboys team that had only just started to pick up steam in their quest to climb the NFC East. However, an ever-ascending Dallas Cowboys defense didn't read the script and produced one of their best performances of the season to stifle the New Orleans Saints' passing attack, and take home the win. 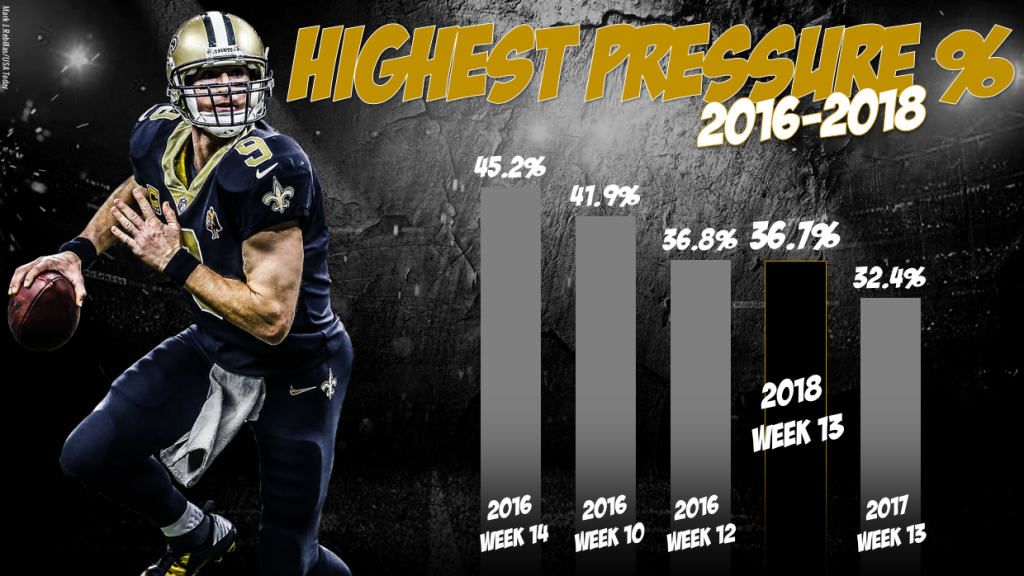 The mightily impressive defensive performance all started with the sublime pass-rushing efforts of the defensive line. As a unit, they were able to generate pressure on 11 of Drew Brees' 30 dropbacks, and the constantly unstable pocket kept the offense out of rhythm for the majority of the game. The sheer volume of pressure that Brees faced on Thursday night was something that the star quarterback had not experienced for a long time. All told, he was moved off his spot on 36.7% of his dropbacks on the night, which was by far the highest pressure rate he's faced this season and the highest rate he's faced since Week 14 of the 2016 campaign.

The kicker for the Cowboys' defense was that they didn't need to send an extra rusher to produce pressure, as they blitzed just twice on the night. Instead of sacrificing valuable members of the coverage unit, they relied on Demarcus Lawrence, Maliek Collins, Randy Gregory and Tyrone Crawford to get the job done in the trenches, and they succeeded.

While all the aforementioned players ended the contest with at least one pressure, Demarcus Lawrence was the standout performer. Lawrence, who is truly capitalizing on his contract year, won five of his 25 pass-rush snaps and produced a strip sack, a quarterback hit and three hurries to go along with an additional strip sack that was nullified by a questionable offsides penalty. His pass-rushing grade of 92.0 was his best mark of the season and the second-best mark of his five-year career to date.

On the night, Brees completed five of his nine attempts under pressure, for 51 yards, a touchdown and an interception. His 69.4 passer rating and 66.7% adjusted completion percentage on those throws are both the fifth-worst marks of his season so far.

If the Cowboys' pass-rush set the tone for the Week 13 clash, the play of the coverage unit enforced it. The Cowboys' defense held Drew Brees to a passer rating of just 71.6 on the night, allowing 18 catches from 28 targets for just 127 yards, a touchdown and an interception. It was the first time since Week 14 of the 2016 season that Brees that been kept to a passer rating of less than 75.0.

Lewis, who was the recipient of the fourth-quarter interception, only saw four targets in the game, but he certainly had his hands full as he was covering dynamic pass-catcher Alvin Kamara on all four of those passes. Despite the apparent mismatch, he allowed only two of those targets to be caught for just nine yards, and he showed tremendous instincts to get under Drew Brees' last pass of the game.

Helping Lewis in coverage was rookie linebacker Leighton Vander Esch, who – and this couldn't come as a surprise – was arguably the best player on the Cowboys' defense on Thursday night. The former Boise State Bronco was all over the field in coverage and logged four solo tackles and three defensive stops on his 25 coverage snaps. On the seven throws into his primary coverage (five of which came against Kamara), he allowed five receptions for just 17 yards, with his longest allowed completion going for a paltry five yards.

Nothing summarises the Cowboys' coverage efforts more than the fact that the defense combined to contest six of Brees' 28 attempts (21.4%) on the night – which is the third-best rate for a defense that has faced the Saints this season. Of those six passes, a staggering four were broken up at the catch point, and just one of those passes was caught by the receiver. The resulting 16.7% completion percentage on his contested passes is Brees' second-worst mark over the last two seasons.

We knew that the Dallas Cowboys' defense had the potential to be formidable way back in Week 6, but the unit that took the field on Thursday night far surpassed expectations. Now atop the NFC East with a 7-5 record, the Dallas Cowboys and the rapidly-ascending defense suddenly and scarily has the potential to go toe-to-toe with even the best offenses in the league. If they can continue to play at the same level through the remaining four games, who knows where they might end up come January.