The 2017 draft class for the New Orleans Saints, put together by general manager Mickey Loomis and assistant general manager Jeff Ireland is one deserving of more than admirable mention. A class that showcased how one successful draft can seemingly turn around a franchise, the Saints' 2017 draft selections featured four of PFF's top 10 rookies – Alvin Kamara, Marshon Lattimore, Ryan Ramczyk and Marcus Williams.

New Orleans is without a second-round pick in the 2018 NFL Draft after trading up with the 49ers in order to select Kamara last year. A run-stopping, pass-rushing edge defender could be on the table for the Saints also in the earlier stages of the draft as the team ranked just 15th in run-defense grades last season while they finished with the ninth-ranked pass-rush unit in 2017. Adding depth to an offensive line with additional support in run-blocking could also be in order, in an attempt to pave the way for their two-headed rushing attack in Kamara and Mark Ingram.

Using our Wins Above Replacement (WAR – roughly the number of wins a team gets from replacing an off-the-street player with the player of interest) metric as a model, four of the top five WAR figures generated by Saints players were done as rookies, including Michael Thomas in 2016 and Lattimore, Kamara and Williams in 2017. 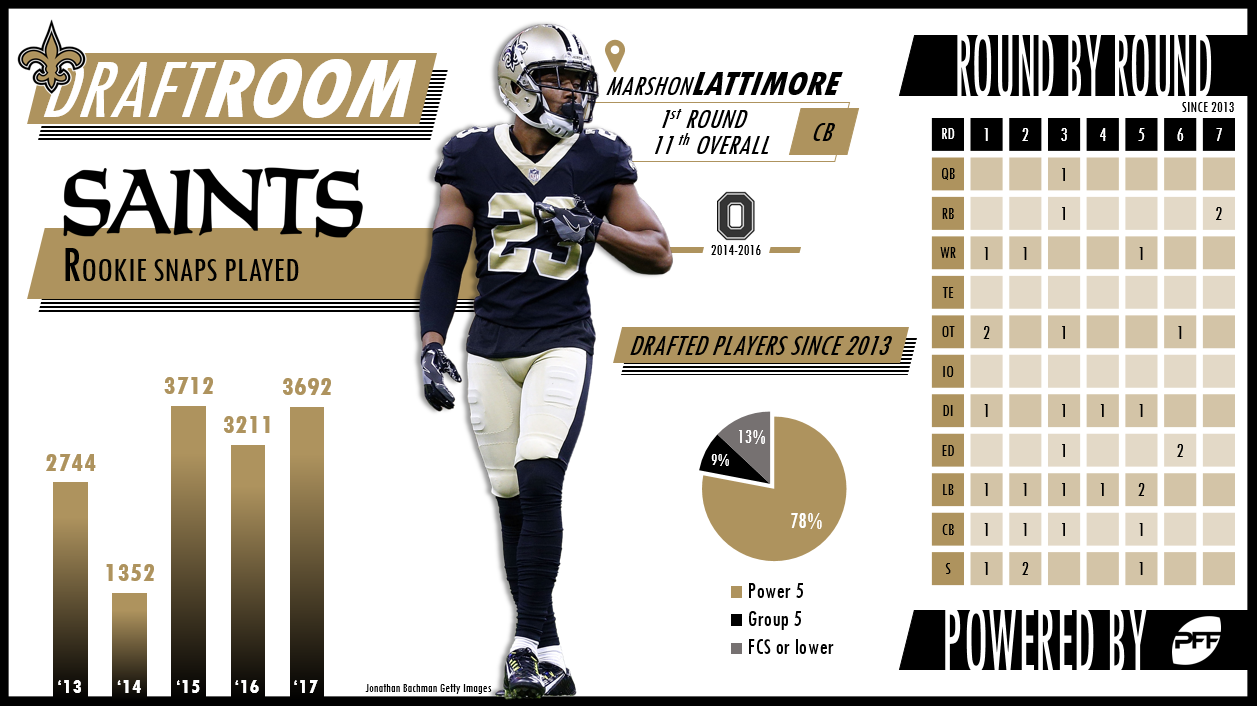 Overall WAR of drafted players for the Saints: 2nd

One of the league’s best young receivers has been worth multiple wins above replacement since entering the league in 2016.

Arguably the league’s best running back in 2017, leading the league in yards per route run and elusive rating.

Was terrific as a rookie in 2017, allowing only a 45.3 passer rating into his coverage (third among cornerbacks.

The blunder leading to the Minneapolis Miracle aside, Williams was solid in 2017, earning the 11th-best grade among all safeties.

Earned the eighth-best grade among all tackles in his rookie season of 2017.

Net a first-round pick from the Patriots after two solid seasons in New Orleans.

Has never earned a PFF grade above 50.0 in three seasons.

Has never earned a PFF grade above 70.0 in three seasons.

The Atlanta Falcons have historically put a premium on ‘competitive toughness' when scouting prospects while general manager Thomas Dimitroff and head coach Dan Quinn co-build a Falcons roster set to compete year in and year out for the NFC South division crown. They've also been a team to aggressively trade up in recent years, as evidenced by their selections of Julio Jones, Desmond Trufant and Takkarist McKinley while Dimitroff has also expressed their intent to split their draft class on half offense and half defense.

There are a few needs on the Falcons roster heading into the draft this year, including addressing some of those lost in free agency. A likely replacement for Taylor Gabriel or replacements along the defensive line to fill the void left by the exits of Adrian Clayborn and Dontari Poe could be warranted in the early stages of the 2018 NFL Draft. Either way, the Falcons have a knack drafting solid players, especially on defense.

Using our Wins Above Replacement (WAR – roughly the number of wins a team gets from replacing an off-the-street player with the player of interest) metric as a model, the starting secondary combination of Trufant, Ricardo Allen, Robert Alford and Keanu Neal have combined for nearly 7.0 WAR since 2013. On offense, running backs Devonta Freeman and Tevin Coleman have put up plus-WAR figures because of their receiving prowess in today's NFL. 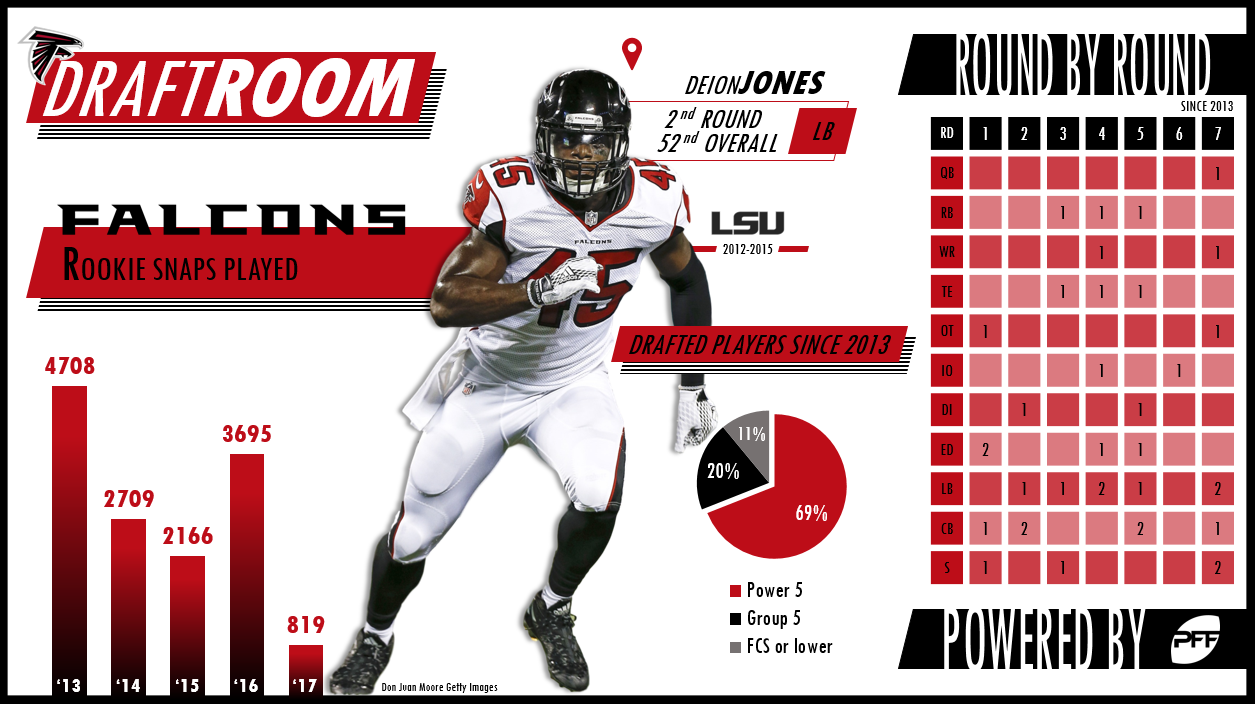 Overall WAR of drafted players for the Falcons: 6th

Highest-graded coverage linebacker in the NFL in 2017.

Has graded above an 81.8 in all five of his NFL seasons.

2016’s first-round pick was the third-highest-grade run defender among safeties in 2017.

Has graded above 80.0 in each season since 2015, providing explosiveness as both a runner and receiver.

A huge steal when drafted, Garrett has been a fantastic interior presence for what has become a good Falcons defense (third in our rating system in 2017.

Failed to beat out De’Vondre Campbell for the second linebacker spot next to Deion Jones as a rookie.

Earned just 13 stops and failed to record a sack in 1044 career snaps.

A team under construction at the highest of levels, the Carolina Panthers will have a completely re-vamped front office in terms of new owner and general manager in the near future. With interim GM Marty Hurney at the held, the Panthers are a bit of a wild card in terms of the directions they could go in the 2018 NFL Draft. Undoubtedly, head coach Ron Rivera will have a say in players they draft as will new offensive coordinator Norv Turner. Carolina sent wide receiver Kelvin Benjamin away last season and signed Jarius Wright and Torrey Smith as added depth this offseason. The Panthers also hold several players on roster at tight end and running back that are more than capable as pass-catchers.

Arguably one of the biggest areas of need for this Panthers team came about when All-Pro guard Andrew Norwell signed his contract with Jacksonville this offseason, meaning only two players with ample snaps on offense to earn plus-grades last season (Christian McCaffrey, Daryl Williams). Norwell's 601 pass-blocking snaps without a sack or QB hit allowed will be sorely missed by not only Carolina fans, but QB Cam Newton who saw his passer rating decrease by 25.1 points when pressured last year.

Using our Wins Above Replacement (WAR – roughly the number of wins a team gets from replacing an off-the-street player with the player of interest) metric as a model, Carolina has returned 17 of their 24 picks since 2013 with positive WAR figures and only six with WAR returns under 0.0. Unfortunately for Panthers' fans, four of their top 10 in WAR figures since 2013 are all gone at this point (Benjamin, Tre Boston, Bene Benwikere, Daryl Worley). 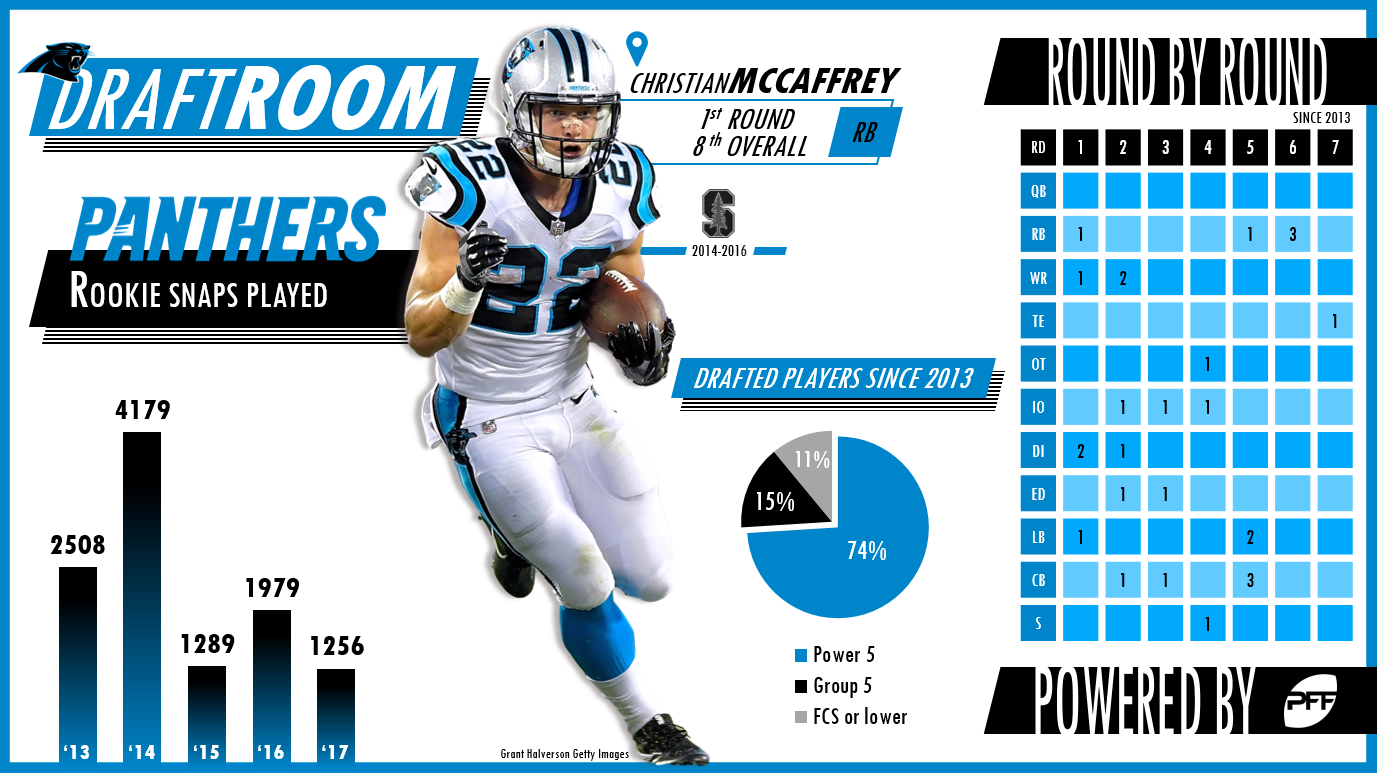 How Have the Panthers’ Draft Classes Stacked Up League Wide 2013-2017?

Overall WAR of drafted players for the Panthers: 7th

Was the 11th-highest graded running back as a rookie, and the third-highest-graded receiving back.

Used as a hybrid linebacker/slot cornerback and has graded above a 77.5 each of his three pro seasons.

Has graded above a 72.2 each of his four seasons with the Panthers.

Struggled in his initial season with Carolina before an injury sidelined him, earning a 44.1 PFF grade.

Aside from an amazing Super Bowl game against Denver, Ealy struggled and is currently on his fourth team.

Not against heavily slanting an entire draft class towards one side of the ball, Tampa Bay Buccaneers general manager Jason Licht has set his sights on improving a specific position group or unit each year of his tenure in Tampa. 12 of his first 13 draft picks were on offense while last offseason they addressed weapons on offense for QB Jameis Winston. This offseason has seen a premium placed on defense with the acquisitions of Vinny Curry, Beau Allen and Jason Pierre-Paul via trade with the Giants, and the re-signing of Brent Grimes at cornerback.

There are still needs across the board in Tampa, but don't always look to big-name, Power-5 schools as the answer as Licht and Co. have looked to small schools as places to fill their voids. Players like Ali Marpet (Hobart), Noah Spence (Eastern Kentucky) and Ryan Smith (North Carolina Central) have all contributed over the past few seasons for the Buccaneers.

Using our Wins Above Replacement (WAR – roughly the number of wins a team gets from replacing an off-the-street player with the player of interest) metric as a model, over half of their WAR generated have come at the hands of Jameis Winston and Mike Evans since 2015. Of their 26 most recent draft selections, only 10 players have a WAR figure above 0.0. Charles Sims was a worthy WAR contributor in 2015 as a pass-catcher, but declined every since. 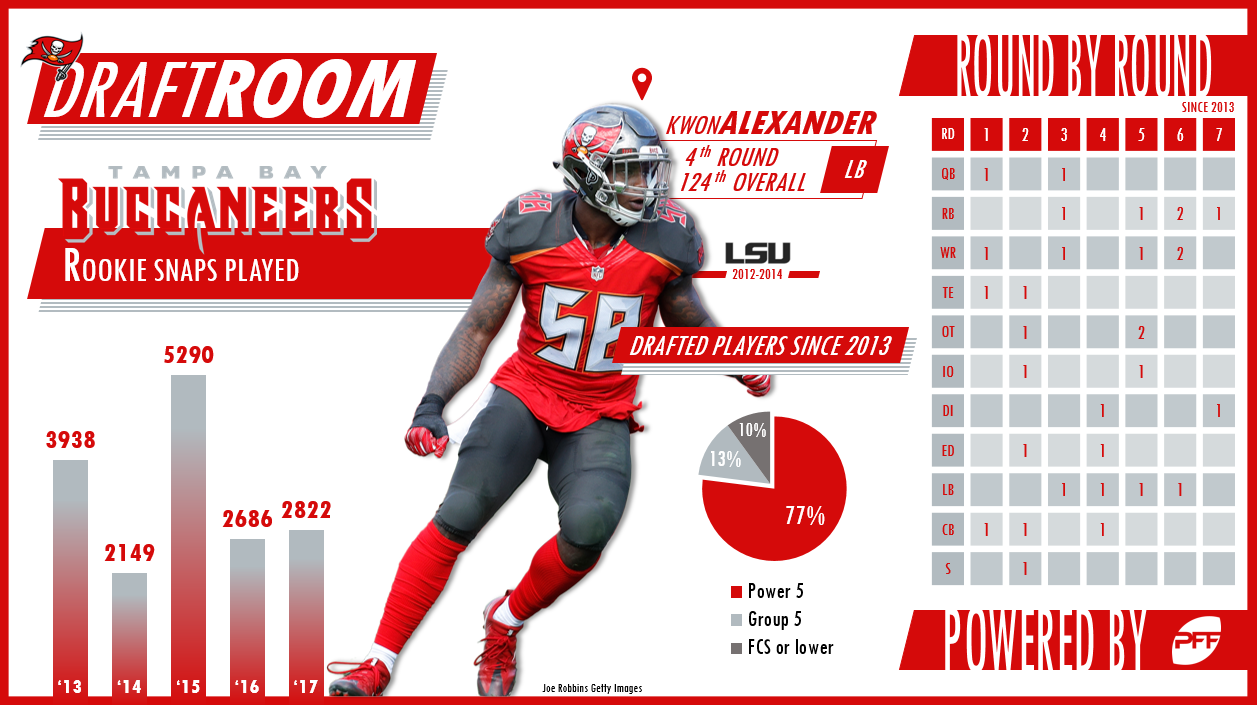 How Have the Buccaneers’ Draft Classes Stacked Up League Wide 2013-2017?

Overall WAR of drafted players for the Buccaneers: 11th

Has had some issues with drops (15 in 2015) and hasn’t provided much after the catch (just 2.3 yards per catch), but has otherwise been terrific, eclipsing 1,000 yards each season.

Has been a second-tier quarterback in our system each of his three seasons, with the type of volatility that will likely make Tampa a contender some seasons and a doormat others.

Impressive 79.9 PFF grade as a rookie.

Has moved from guard to center and now back to guard, but has always played well, earning a PFF grade above 75.0 each of his three seasons.

Flashed a ton of potential as a rookie, but was a bottom-five run-blocker at the position.

Earned a 40.4 PFF grade as a rookie, declining as the season went on.

Flashed some potential, but ultimately failed to stick after allowing a 142.6 rating into his coverage in 2015.