At PFF, we take great pride in assessing the finer details of the game, and offensive line play is high on that list. In this article, we look at each team on the PFF Top-25 and focus on the overall team pass-blocking efficiency as well as the team’s highest-graded offensive lineman.

Earlier this offseason, we highlighted Carman as a sophomore ready to breakout in 2019. He’s done just that, holding down the left tackle spot vacated by four-year starter Mitch Hyatt. Carman has allowed just eight quarterback pressures—and zero sacks—on 300 pass-block snaps, and he leads an offensive line that has only allowed Trevor Lawrence to be pressured on 24.8% of his dropbacks, the 16th lowest mark in the FBS.

Lewis has been the most consistent of a generally inconsistent Tiger offensive line. He’s the only player with a grade above 70.0 in all three categories and has started every game. For the season, he’s allowed 11 total QB pressures on 419 pass-block snaps.

After starting two games at the end of 2018 due to injuries ahead of him, the former five-star recruit and redshirt sophomore has stepped up big time in 2019. He is currently the third-highest-graded guard in the FBS and has yet to give up a sack or hit. In total, he’s only allowed 10 QB hurries and also has the fourth-highest run-block grade among FBS guards.

If not for the amazing season by the next player on this list, Wills Jr. would be the SEC’s highest-graded lineman. After posting a 68.7 grade on 927 snaps a season ago, the junior has taken a big step forward and dominated in 2019. He’s allowed 10 total QB pressures—including just a single sack—and he is the fourth-highest-graded lineman in all of the FBS. His 92.6 run-block grade is third-highest.

Thomas has been dominant from the outset in 2019 and cemented his status as both one of the best linemen in college football and a possible top-10 draft pick in next spring’s draft if he declares. On the season, Thomas has yet to allow a sack or hit and only allowed six quarterback hurries total. And, as PFF’s Lead Draft Analyst mentioned in his positional rankings this week, he’s done that work against high-end defensive lines and edge defenders. He anchors PFF’s top team in run-block grade and also a group that has only allowed QB Jake Fromm to be pressured on 22.5% of his dropbacks, sixth-lowest in the FBS. 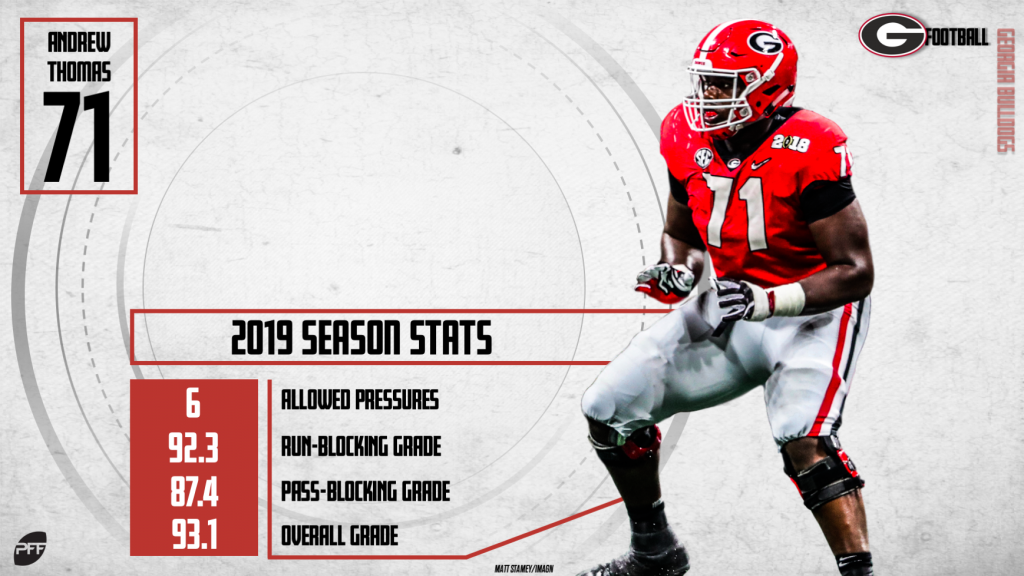 After a solid showing in 2018 with a 73.4 overall grade, Menet has taken another step forward as a junior. He is currently the seventh-highest-graded center and has allowed only seven total QB pressures. Further, he’s been penalized only once.

The senior is the Wolverines’ highest-graded lineman and part of a very experienced group that includes two other high-performing seniors in Jon Runyan (74.2 grade) and Ben Bredeson (72.8). Onwenu has allowed seven total QB pressures but has yet to give up a sack, and he also leads the team in run-block grade.

With four of their five linemen from 2018 drafted, it’s not been the usual dominant offensive line for the Sooners in 2019. Humphrey was the lone returner from last year’s group and, while he’s not been at his 78.9-grade level from 2018, he’s been the steadiest. Humphrey has yet to allow a sack or hit and has only allowed five quarterback hurries while also boasting the team’s highest run-block grade.

The senior is playing at his best in his final season. He has the highest run-block grade among Irish linemen, and he's allowed only 10 QB pressures while not yet allowing a sack. His grade, though, has also been negatively impacted by his eight penalties, the 11th-most among FBS tackles.

Like Oklahoma, the Gators have struggled along the offensive line after having to replace four starters from a season ago. Forsythe has been the best of the bunch, leading the Gators in run-block grade. He’s struggled in pass protection, though, allowing 20 total QB pressures, including three sacks.

The Tigers returned their entire offensive line, and it’s shown in their ability to protect the quarterback, as they lead FBS offensive lines in pass-blocking efficiency. Harrell has the highest pass-blocking grade among the group, allowing only five total QB pressures and no sacks. The team as a whole has struggled with run-blocking, though, but Harrell’s run-block grade also leads the team in that category.

The junior is having his third straight standout season for the Badgers, leading them in both pass- and run-block grade and helping pave the way for standout running back Jonathan Taylor. He’s only allowed two total QB pressures and is currently the third-highest-graded FBS center. For his career, Biadasz only allowed 19 total QB pressures on 960 pass-blocking snaps.

The true sophomore is on a whole other level from the competition up to this point in 2019. He’s on pace to be the highest-graded offensive tackle since PFF has been grading college games (2014), as his pass-block grade is second in the FBS and his run-block grade is an overwhelming first.

The senior has been the best player on a line that’s struggled to protect QB Tyler Huntley. Even though Huntley has been pressured on 41% of his dropbacks, Paulo has only allowed seven total QB pressures, including only a single sack.

A physical specimen, Wirfs is having an outstanding 2019 and put himself just behind Georgia’s Andrew Thomas as the top draft-eligible tackle. He’s only allowed seven total QB pressures on 365 pass-block snaps and leads the Hawkeyes in all three grade categories. 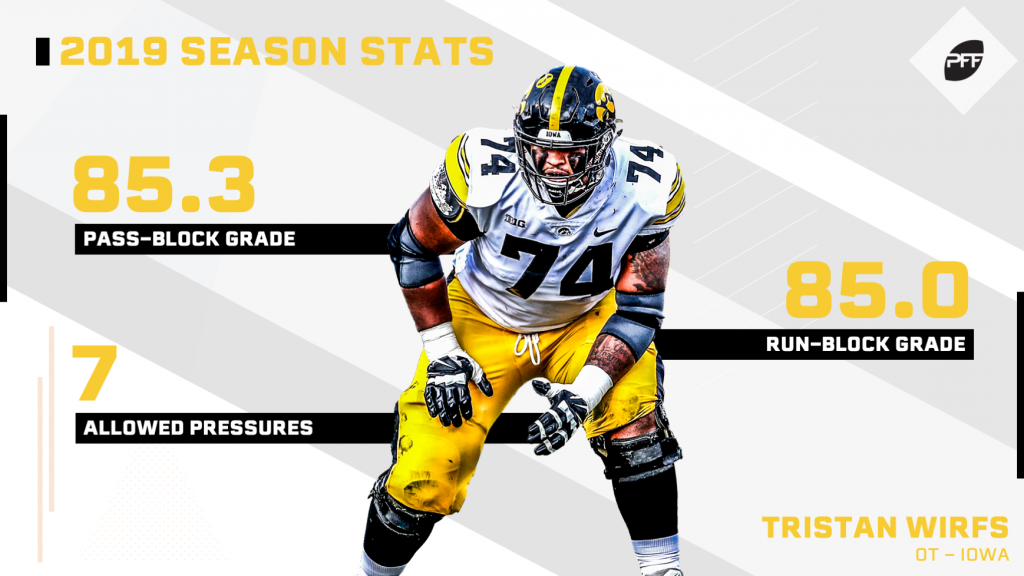 If we didn’t take into account snap numbers, part-time player and recent starter at center John Michael Schmitz would be the Gophers’ highest-graded lineman (87.2 overall grade), but he’s only played 282 snaps. The massive human that is Faalele has been their most consistent lineman, especially recently. On the season, he’s allowed 12 total QB pressures, including three sacks, but over the past four games, he’s only allowed two pressures and zero sacks.

The senior has put together back-to-back solid seasons and is finishing his career with the Huskies with a career-high grade in every category. In addition to being the Huskies' highest-graded linemen in run-blocking, he’s only allowed seven total QB pressures and zero sacks.

The Aggies have struggled along the offensive line, especially in pass protection. Luckily for them, QB Kellen Mond is good at escaping that pressure. Mond has been pressured on 39.6% of his dropbacks (sixth-most in the FBS), but only sacked on 16.9% of his dropbacks. Green is both the highest-graded pass- and run-blocker for the Aggies. He’s allowed 21 total QB pressures, including three sacks, on 398 pass-block snaps.

The redshirt sophomore has anchored the Longhorn line for the second straight year, leading them in overall and run-block grade. Cosmi is the 11th-highest graded tackle, allowing only 10 total QB pressures, including just a single sack. Cosmi also often lines up at tight end in the Longhorns’ power sets, as his 21 snaps at tight end are the 12th-most among tackles.

The senior has played all over the line for the Tigers during his four years and over 3,400 snaps. Primarily a left guard his first two years, he played over 1,000 snaps at right guard in 2018. This season, he’s made the switch to center, and he is still the Tigers’ best lineman. He’s only allowed three total QB pressures and is also their highest-graded run-blocker.

Baylor is another team that has struggled along the offensive line, especially at run-blocking. The senior Tecklenburg has been the most reliable in pass protection, allowing only four total QB pressures and posting the 11th-best pass-block grade among guards. It has been a big improvement for him individually, as he had allowed 26 and 20 total QB pressures in the previous two seasons, respectively.

After seeing spot duty as a redshirt freshman last season, Vera-Tucker earned a starting spot this season and has been the Trojans' best lineman. In addition to being their highest-graded run-blocker, he’s yet to allow a sack or hit in pass protection. He has allowed just six QB hurries, and his pass-block grade is good for third-best among all FBS guards.

The senior is having his best season yet for the Cyclones in 2019. He is the team’s leader in all the above categories, allowing 16 total QB pressures, including two sacks, on 449 pass-block snaps. Unfortunately, though, the penalties have followed Meeker, as his nine penalties are 10th-most among FBS tackles.

A former walk-on, Morrisey has manned the middle for the Panthers for the past three seasons with great consistency, and 2019 is no different. Even though the team has struggled to keep Kenny Pickett clean (he's been under pressure on 40% of his dropbacks, third-most in the FBS), Morrisey has done his part. He’s yet to allow a sack or hit and has only allowed 10 QB hurries.

The redshirt junior and now three-year starter has been a high-level performer for the Broncos from the moment he began playing. His overall grade makes him the 16th-highest-graded tackle, as he’s allowed 10 total QB pressures, including three sacks. He also stays away from drawing the yellow flag, as he’s only been penalized once this season.