Seemingly every season, there are local articles and stories written across the country about a true or redshirt sophomore who, after working his tail off in the offseason, appears ready to blossom and become an impact player.    Often times the player is now getting the opportunity to get first-team reps and play a lot more, while other times that player comes out of nowhere to be a star.  Let’s examine eight true/redshirt sophomores (many of whom were highly ranked recruits coming out of high school) who shined as freshmen a season ago (some in limited action) and appear ready to become household names by the end of the season.

These two former five-star recruits are ready — and able based on their 2018 performances — to step up and lead the Tigers’ defensive and offensive lines after a mass exodus to the NFL.  As you probably already know, Clemson lost its entire starting defensive to the NFL Draft this past spring — all four were picked in the first 117 picks of the draft, including three first-rounders.  Xavier Thomas sits in prime position to lead the rebuilt defensive front after posting an 83.4 grade on 318 snaps. Thomas totaled 26 QB pressures on 150 pass-rush snaps, and his 17.3% pressure rate is the third highest among returning Power 5 edge defenders. 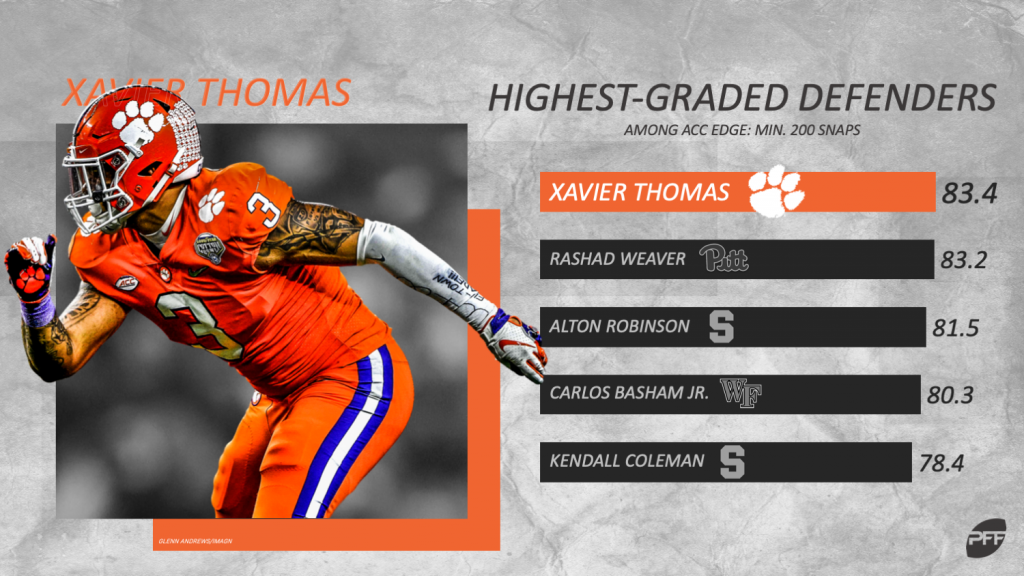 On the other side of the ball, Carman will be asked to replace four-year starting LT Mitch Hyatt, who logged almost 3,800 career snaps for the Tigers.  In his 209 snaps in 2018, Carman had a 73.2 grade and allowed four total quarterback pressures on 82 pass-block snaps.  His 72.2 run-block grade was second on the team among lineman with at least 100 snaps.

Neither of these two Bulldogs were highly touted recruits, but both took great advantage of their opportunities and now look to secure their spot among the SEC’s and nation’s best.  As a true freshman, the 6-foot-6, 330-pound Davis did not see significant snaps until the sixth game of the season, but he immediately became a force in the middle once he did.  Davis posted a 77.9 overall grade and 80.0 run-defense grade and finished the season with 14 stops in 254 snaps.  While the Bulldogs rotate eight to 10 defensive linemen, expect to see a lot more of Davis in 2019 manning the middle of the Georgia defense. 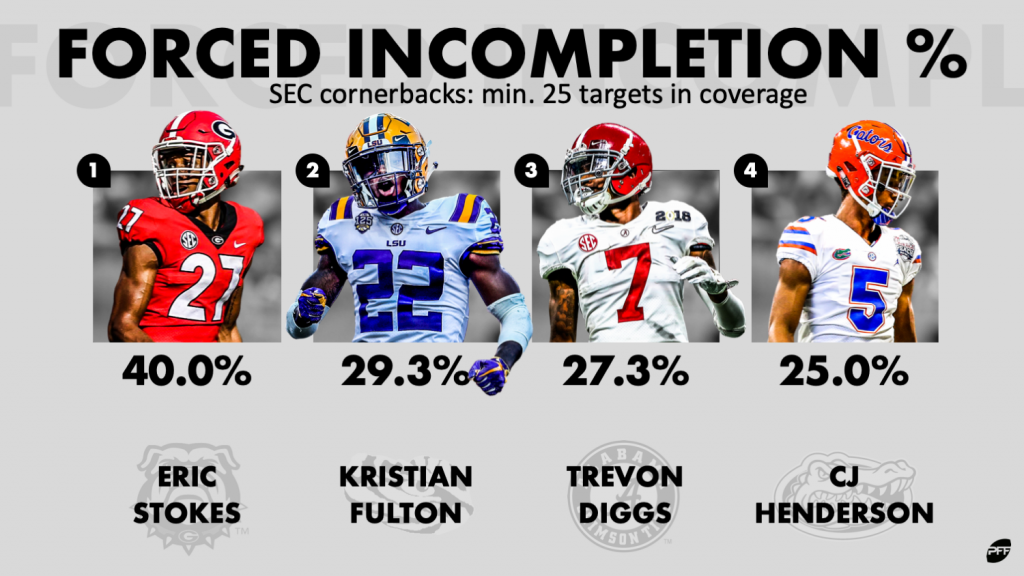 Stokes, a redshirt sophomore this season, did not truly see his role increase until Week 11 in Georgia’s game against Auburn, and he balled out once given the chance.  PFF's Austin Gayle already highlighted Stokes’ 2019 breakout potential, noting his Power 5 leading 40.0% forced incompletion rate and how he allowed only 10 receptions on 25 targets for a total of 113 yards in 211 coverage snaps (82.2 overall grade).  Along with true sophomore Tyson Campbell (69.8 grade), the talent is there for Georgia to have one of the best young cornerback tandems in college football.

Off to the NFL are former standout WRs Paris Campbell and Terry McLaurin, and now the Buckeyes will look to sophomore Chris Olave (70.9 overall grade) to provide a presence opposite standout K.J. Hill (80.5 grade).  While we didn’t see much of Olave in 2018 (169 snaps), he came up big when he did see the field.  In the Michigan game and then against Northwestern in the conference championship game, he caught all seven of his targets for 127 yards and three touchdowns.  On the season, Olave caught 12-of-16 targets for 197 yards and those three TDs, good for a 129.4 passer rating when targeted.

Given Trayveon Williams and his almost 300 touches a season ago are now with the Bengals, look for Corbin (79.5 overall grade) to see his opportunities greatly increase — and deservedly so.  Corbin averaged 5.7 yards per attempt on 61 attempts while gaining 203 of his 346 yards after contact.  In addition, 21 carries went for a first down, and 12 of the 61 carries went for 10-plus yards.  He also caught 10 of 11 targets for 85 yards in the passing game.

Seeing action in all 12 games as a true freshman (219 snaps), Stills finished the season as the Mountaineers’ highest-graded defender with a 79.7 overall grade.  In addition to his 10 stops, Stills collected 12 total QB pressures on only 127 pass-rush snaps.  Expect to see a lot more of Stills along new head coach Neal Brown’s defensive line, oftentimes lining up beside his older brother, junior Darius Stills (65.3 grade on 310 snaps). 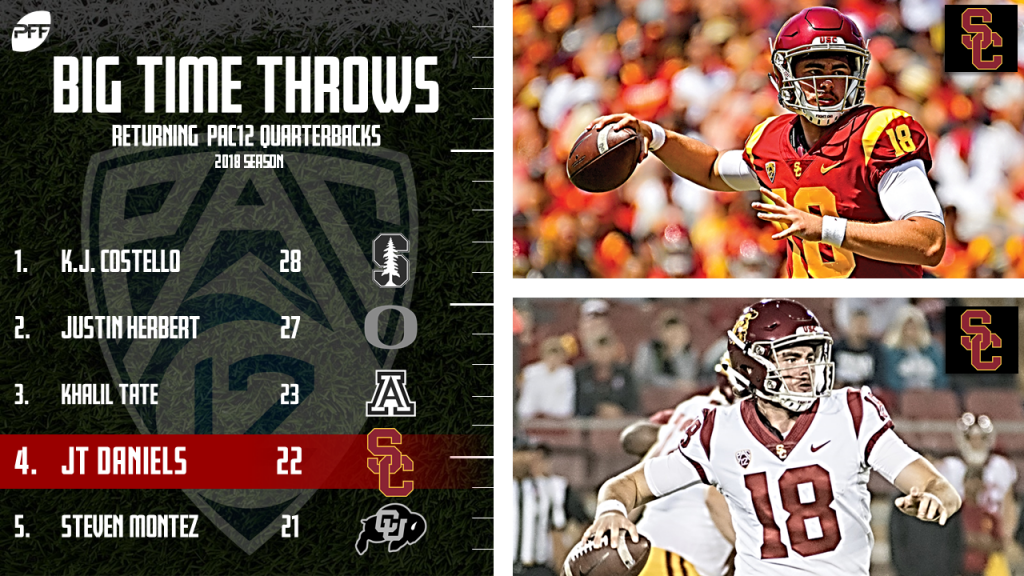 While the above players on this list played well in their limited time as freshmen, J.T. Daniels played a lot (720 snaps) and didn’t play well (59.8 grade).  While he was solid from a clean pocket (72.2 grade with a 69.8 adjusted completion percentage), Daniels struggled mightily when pressured (29.2 grade) and when blitzed (43.9 grade).  So why is he on this list?  Primarily because of the offense he’ll run and the coaching he’ll receive in 2019 with new offensive coordinator Graham Harrell.  Harrell comes to USC after leading North Texas’ offense for the past three seasons.  Under Harrell, current Mean Green QB Mason Fine (90.8 grade in 2018) is a dark horse Heisman contender this season.