Why sprinting to the podium at No. 2 overall with Chase Young on the card might be a bad idea

Since the Cincinnati Bengals clinched the first overall pick by losing to the Miami Dolphins in an overtime thriller in Week 16, it seems like a foregone conclusion that Joe Burrow is a future Bengal, and when the LSU standout beat up on the Oklahoma Sooners and Clemson Tigers like they were Division II opponents, this belief was only reinforced.

We at PFF think Joe Burrow's 2019 campaign was the best season we've seen from a quarterback in the (admittedly short) PFF College era and thus have little reason to doubt the Bengals will go with Burrow as the future leader of their franchise. So let's assume the Washington Redskins are on the clock with the second overall pick.

On the surface, it looks like Chase Young is an easy choice at this spot. After all, Young is almost unanimously considered to be the best defensive player in the draft and may even be the best defensive prospect we've seen in several years, as he had the highest single-season pass-rushing grade we've ever measured. During his time at Ohio State, his 95.4 pass-rushing grade comfortably bested the performances of fellow Ohio State products Nick Bosa (93.7) and Joey Bosa (93.0).

Consequently, there are a lot of voices saying Young at No. 2 is a no-brainer, while other voices show more nuance, as Peter King managed to find a source at the Senior Bowl who noted the Redskins could remake their franchise within one year by dealing the pick. In this article, we want to investigate the Redskins' options from an analytical perspective, providing a framework on how to think of such a decision.

Distribution of future outcomes is the key to draft decisions

If someone told the Redskins at the beginning of the 2019 season that they will come away from the 2020 NFL Draft with the best defensive player, they would have rightfully signed, but a lot has changed since then: The Redskins got the second overall pick and, most importantly, Joe Burrow emerged during the 2019 season to supplant Tua Tagovailoa as the all-but-certain first overall pick. With positive news spreading about Tua's health, the second overall pick might be as valuable as in 2012 or 2016 when Robert Griffin III and Carson Wentz were available.

When holding such a valuable asset, the question arises whether the opportunity cost of picking a pass-rusher has become too high. To answer such a question, we have to refrain from simple analysis like ‘Who is the better player?' and think of the future of involved players in terms of a distribution of outcomes and additionally translate the outcomes into a measurement of value. This is precisely what we are doing at PFF, as Eric Eager and George Chahrouri not only developed PFF WAR, but also a framework to evaluate draft trades and project the outcomes of draft prospects from college to the NFL.

A win-win trade is in plain sight

When evaluating a trade, the conclusion, of course, depends on how one values the involved assets. But assuming we have these fixed, there is usually a winner (as in, more likely that the obtained assets are more valuable than the assets that were given up) and a loser. 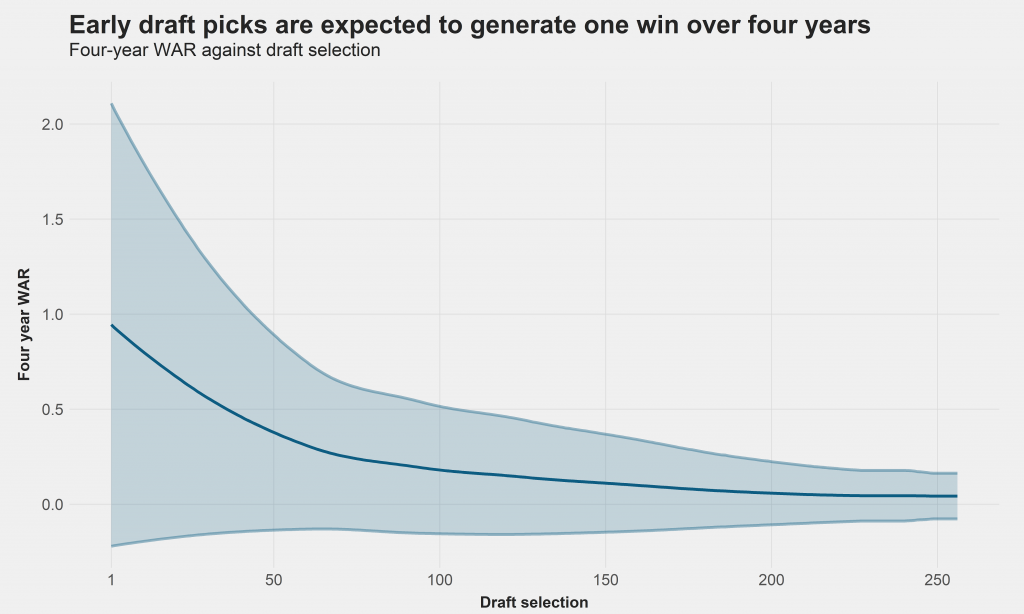 As far as the second overall pick is concerned, let's say the Panthers want to end their eight-game losing streak at the end of 2019 by getting their guy at No. 2, offering their first- and second-round pick of the same draft (No. 7 and No. 38). This sounds like a low trade compensation, yet our numbers say it would be enough to make up for losing the second pick.