• Beware of the Dallas Cowboys defense: The Cowboys have the highest-graded pass rush in the league and are second in the league in EPA allowed per play (-0.127).

• Cincinnati Bengals miss Ja’Marr Chase: It was concerning to see how badly the Bengals' offense struggled without the star WR, as they generated a season-low -0.199 EPA per play against the Browns in Week 8.

The 2022 NFL trade deadline was one for the history books, with a deadline-record 10 trades made between NFL teams. We will find out in the next few weeks whether these moves affect our power rankings.

After a tumultuous Week 8, the Atlanta Falcons lead the NFC South after their 37-34 win over the Carolina Panthers and now have a 40% chance of making it to the playoffs. Meanwhile, the Philadelphia Eagles remain undefeated and have a pretty easy upcoming schedule that ranks 25th league-wide in terms of difficulty.

Sitting at 5-3 with sole possession of the NFC West, the Seahawks have made a five-spot jump up our power rankings. Quarterback Geno Smith is having far and away the best season of his career and heads into Week 9 as the second-highest-graded signal-caller in the NFL. The defense is starting to get comfortable, with fifth-round rookie cornerback Tariq Woolen somewhat stealing the show with his league-leading four interceptions.

However, they have a tougher schedule coming up, so let’s see if they can continue to prove the doubters wrong.

The Jets and Raiders each fall six spots in our power rankings, mainly due to collapses on the offensive side of the ball.

Last week, the Raiders failed to score a single point against a New Orleans Saints team riddled with injuries on defense. Their offensive struggles are inexcusable at this point, and the fact that Davante Adams and Hunter Renfrow were held to just one catch apiece last weekend tells you all you need to know.

The Jets were riding an incredible four-game win streak heading into Week 8, largely due to their strong run game and shut-down defensive performances. However, their luck ran out when the New England Patriots forced QB Zach Wilson to throw the ball, which he did, notably three times to the other team.

Without RB Breece Hall and OG Alijah Vera-Tucker on offense, the Jets will have to rely on the improvement of Wilson and a depleted offensive line.

Saints toughing it out:  The New Orleans Saints lost CB Bradley Roby in Week 7 and RB Mark Ingram II in Week 8. They've lost about 0.025 more WAR than the next two closest teams, the Baltimore Ravens and Tampa Bay Buccaneers.

A welcome return: On the other end of the spectrum, the San Francisco 49ers recently welcomed back safety Jimmie Ward, which helps ease the load on their secondary. Shanahan's squad has struggled to stay healthy this season, so it's nice for them to have some good news.

The rich get richer: The Minnesota Vikings have lost the least WAR due to injury this season and just traded for another star player in tight end T.J. Hockenson, who ranks ninth among tight ends in PFF receiving grade this year (74.7). 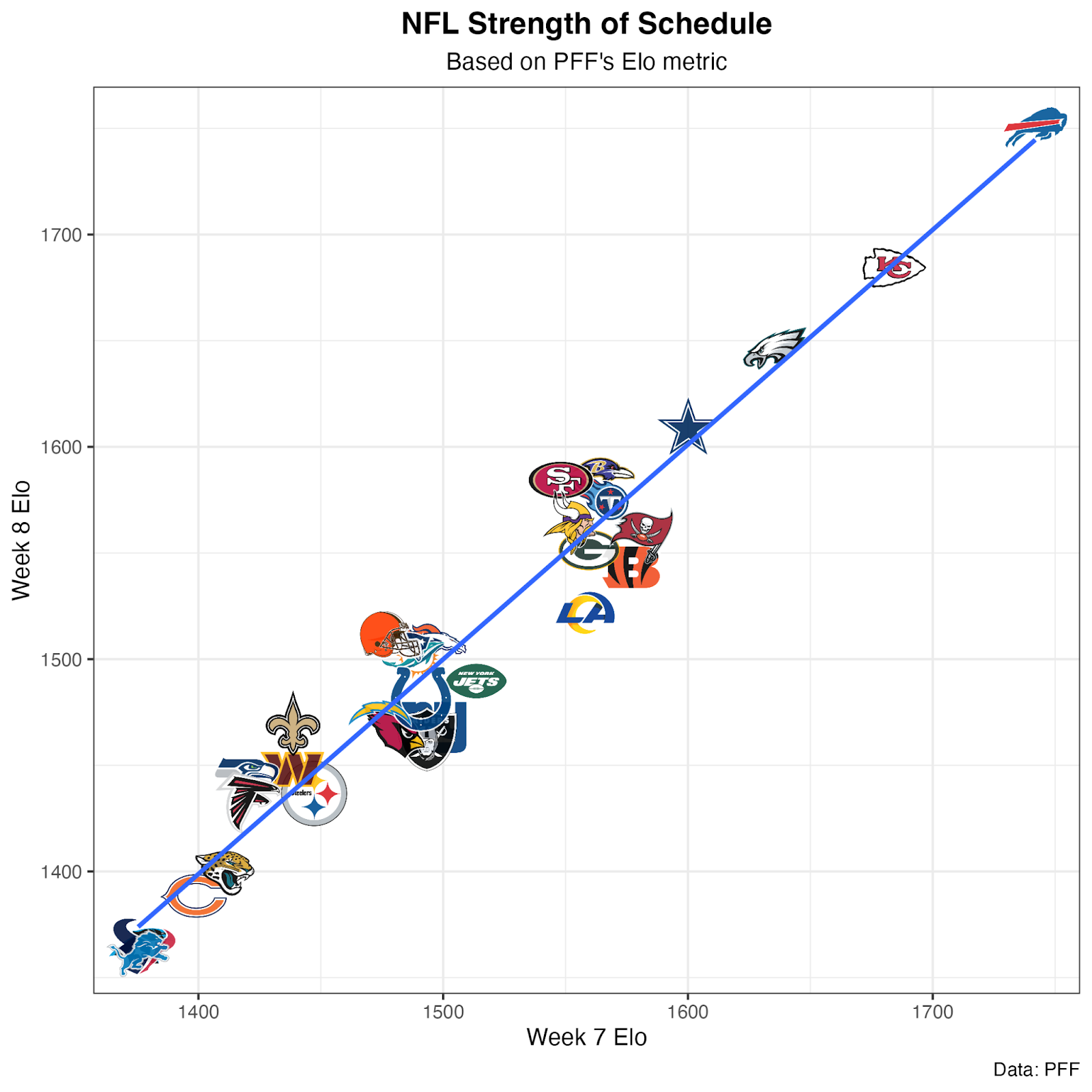 The 49ers among the biggest risers in Elo: The Niners slide up to sixth in PFF's Elo rankings after completing an impressive road win against the Los Angeles Rams. The Ravens, Browns and Saints also made big strides up our rankings after dominant Week 8 performances.

Life tough without Chase: After two victories against banged-up opponents — the Saints and Falcons — the Cincinnati Bengals fall down the Elo rankings after a 19-point loss against the Browns. It was slightly concerning to see how badly the Bengals' offense struggled without star WR Ja’Marr Chase — they generated a season-low -0.199 EPA per play — so this is something to keep an eye on in the coming weeks. 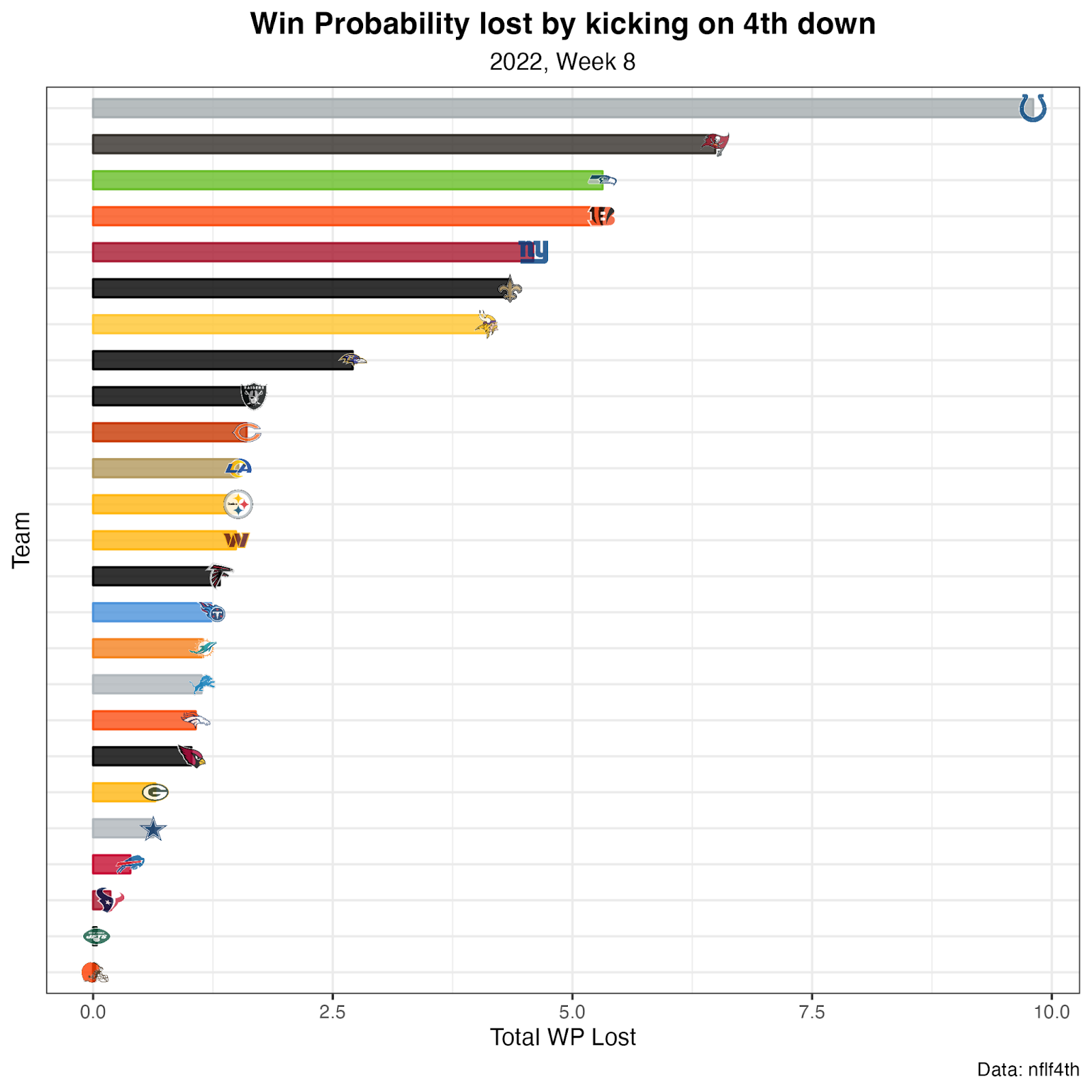 Colts coming up short: The Indianapolis Colts were up 16-7 against the Washington Commanders with 11:12 left in the fourth quarter. All they had to do was keep possession and stop Washington from going down the field. It seems easy, right? The Colts' fourth-down decision-making was by far the worst of any team this past week and resulted in a loss when they desperately needed a win. They punted four times when they could have gone for it and added to their lead.

Playing to win: Despite punting six times, the Commanders were successful on 67% of their fourth-down attempts. This contributed to their win against the Colts. 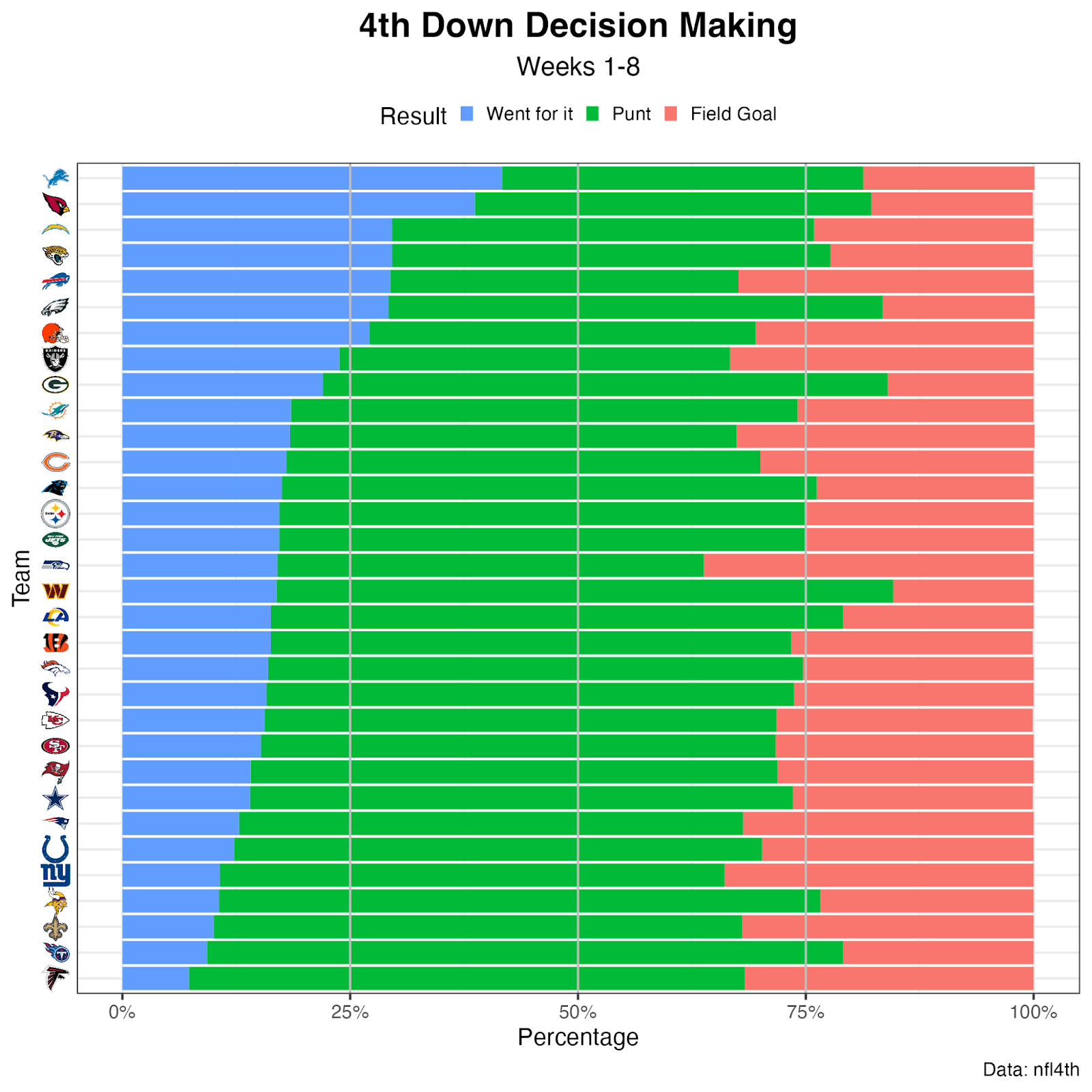 Lions reluctant to go for it:The Detroit Lions could not hold off the Miami Dolphins on Sunday, allowing Tua Tagovailoa & Co. to rally back from a 10-point deficit. Dan Campbell's squad went for it just once on fourth down in the second half — they scored no points, punted twice, and turned it over on downs once. Will the loss of T.J. Hockenson affect their fourth-down decision-making?

Falcons need change to stay on top: Atlanta may sit atop the NFC South, but they have gone for it on fourth down at the lowest rate in the league. This will not help them in the long run.

It's easy to be a Bills punter: The Buffalo Bills struggled on fourth downs against the Green Bay Packers and had to punt twice. The Bills have punted only 13 times this season, the fewest in the league by six. 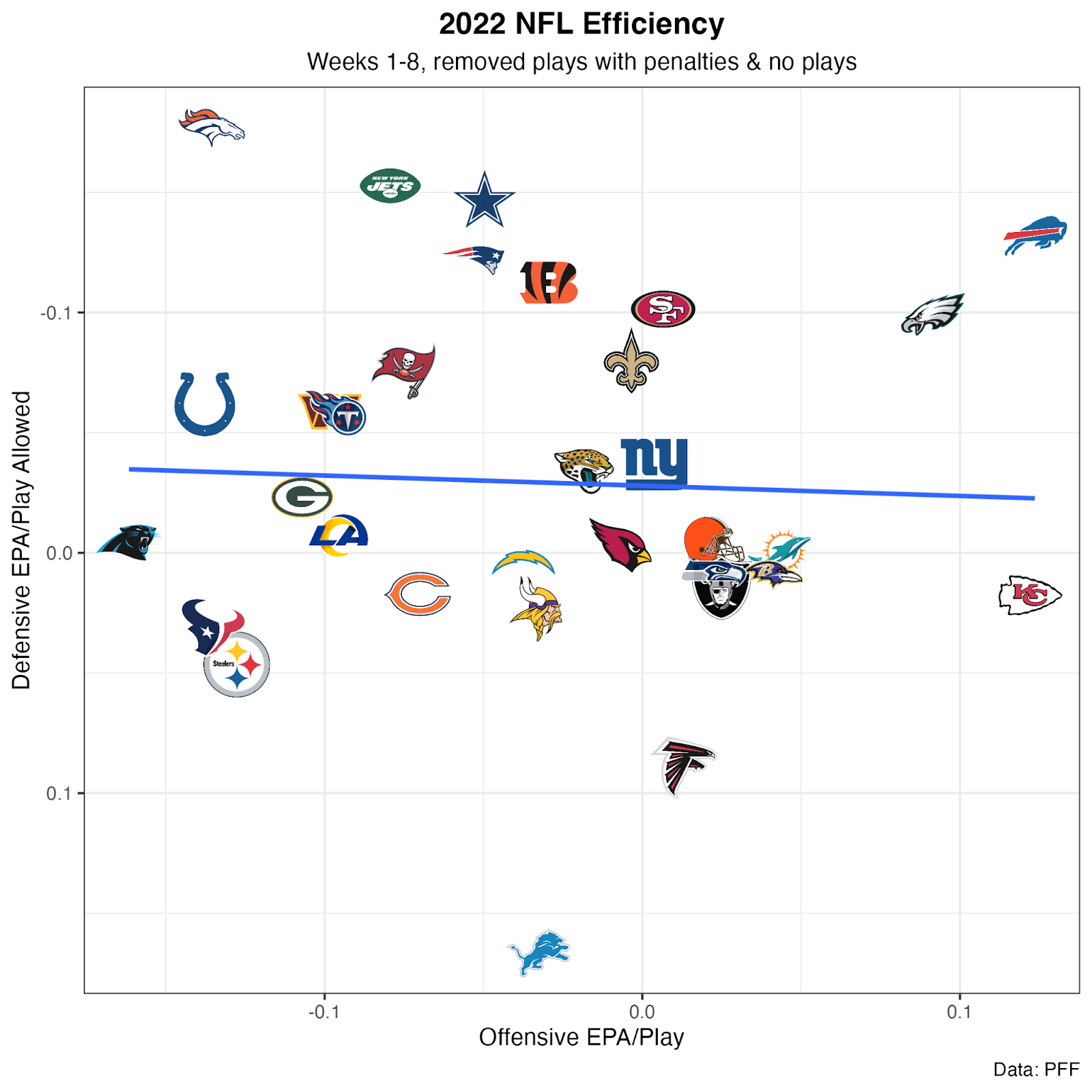 Bills aren't a one-unit team: Buffalo's defense is much improved from last year. They are the league's seventh-best defense according to PFF grades, and they rank second in the league in team pass-rush grade. The Bills have allowed -0.126 EPA per play, third in the league.

Detroit surprisingly struggling: The Lions defense has struggled this season despite the additions of edge defender Aidan Hutchinson and linebacker Malcolm Rodriguez. They have earned the lowest team coverage grade in the league (40.4) and have allowed the most EPA per play (0.157) through eight weeks.

Giants outdoing themselves: It’s interesting to see that the New York Giants are about average in terms of offensive and defensive efficiency. Even with Saquon Barkley running the show, they are still 16th in team rush grade (80.7). They are also 16th in team pass-blocking grade (64.0). Like the Eagles, their schedule has not been difficult, and they face two of the league’s worst teams (Texans and Lions) over the next two weeks. 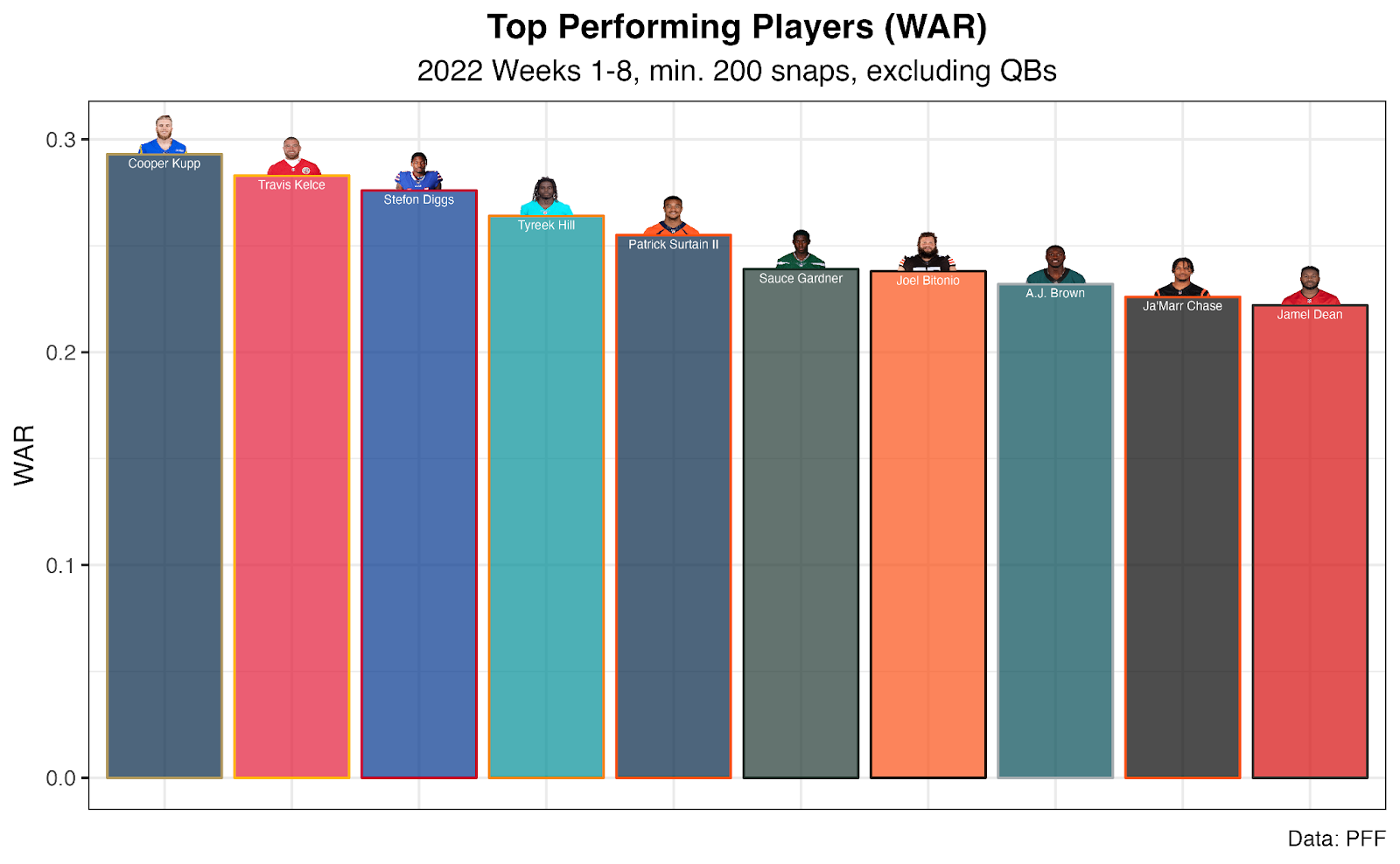 Unsurprisingly, some of the league's most valuable players are also some of the most targeted.

Jets cornerback Sauce Gardner is the lone rookie on this list, as he’s been the rock of New York's coverage unit so far this season. The majority of their defensive success has come directly from Gardner and D.J. Reed, as their defense has been the key driver in most of their wins this season.

The biggest standout in this list is DeAndre Hopkins, who has played only two games but earned one of the highest grades among wideouts in Week 8 (84.1).