NFL Week 16 Power Rankings: Trevor Lawrence and the Jacksonville Jaguars are on the rise

• 49ers are on a roll: The 49ers clinched the NFC West with their Week 15 win over the Seahawks and now ride a seven-game win streak into their pivotal Week 16 clash with the Washington Commanders. PFF Greenline has them at a 19% chance of winning the NFC Championship.

• Jaguars staying alive: The Jaguars are one win behind the Titans in the AFC South. The Titans and Jaguars have the 26th- and 27th-hardest schedules, respectively, according to PFF Greenline. Per PFF's simulation, the Titans win the division 64% of the time, while the Jaguars get there 34% of the time.

The Bills, Cowboys, Vikings and Chiefs solidified their spots in the postseason in Week 15. They join the Philadelphia Eagles, who punched their ticket the week before.

Dolphins QB Tua Tagovailoa earned a season-low 49.7 PFF grade, and only 37.9% of his passes were charted as accurate, the third-worst figure at the position in Week 15.

Cowboys clinch a playoff spot despite loss: The Cowboys failed to put the Jaguars away in regular time and ultimately paid the price, as a pick-six in overtime handed Trevor Lawrence & Co. a 40-34 upset win.

Cowboys QB Dak Prescott took an average of 3.03 seconds to throw the ball, a season-high mark, and he threw two interceptions. The Dallas defense struggled, allowing the second-most EPA per play of their season (0.066).

Chiefs win the AFC West: In their overtime win over the Texans, RB Jerick McKinnon ensured victory with a 26-yard touchdown run and earned his best PFF grade of the season (70.4). The Chiefs ranked fifth league-wide in team offense grade (75.8) and first in team passing grade (90.5) this week.

Vikings clinch the NFC North: The Vikings came away with the biggest come-from-behind victory in NFL history. They entered halftime down 33-0 yet somehow beat the Colts 39-36.

49ers are on a roll: The 49ers clinched the NFC West with their Week 15 win over the Seahawks and now ride a seven-game win streak into their pivotal Week 16 clash with the Washington Commanders. PFF Greenline has them at a 19% chance of winning the NFC Championship.

Wilson’s return: Zach Wilson was back as the Jets starter with Mike White sidelined with a rib injury. He threw for 317 yards — 9.1 yards per attempt — and recorded five big-time throws. The former No. 2 overall pick finished the game with a 13.9% big-time throw percentage, by far the best mark of his career.

Jaguars staying alive: The Jaguars are one win behind the Titans in the AFC South. The Titans and Jaguars have the 26th- and 27th-hardest schedules, respectively, according to PFF Greenline. Per PFF's simulation, the Titans win the division 64% of the time, while the Jaguars get there 34% of the time.

Eagles stumble: Against the Bears in Week 15, the Eagles earned their worst team offense grade of the season (65.0), as well as their second-worst rushing grade (57.9) and run-blocking grade (38.6). They were held without a passing touchdown for the first time since Week 5.

The Eagles need just one more win to clinch the No. 1 seed in the NFC.

Restoring the roar: They didn't have their best game, but the Lions were able to come away with a Week 15 win. Jared Goff threw just 5.0 yards down the field on average and averaged 5.3 yards per pass attempt, both season-low marks.

It was a pretty average game for Sauce Gardner, too. The leading candidate for Defensive Rookie of the Year has now allowed one catch or fewer in half of his games this season. 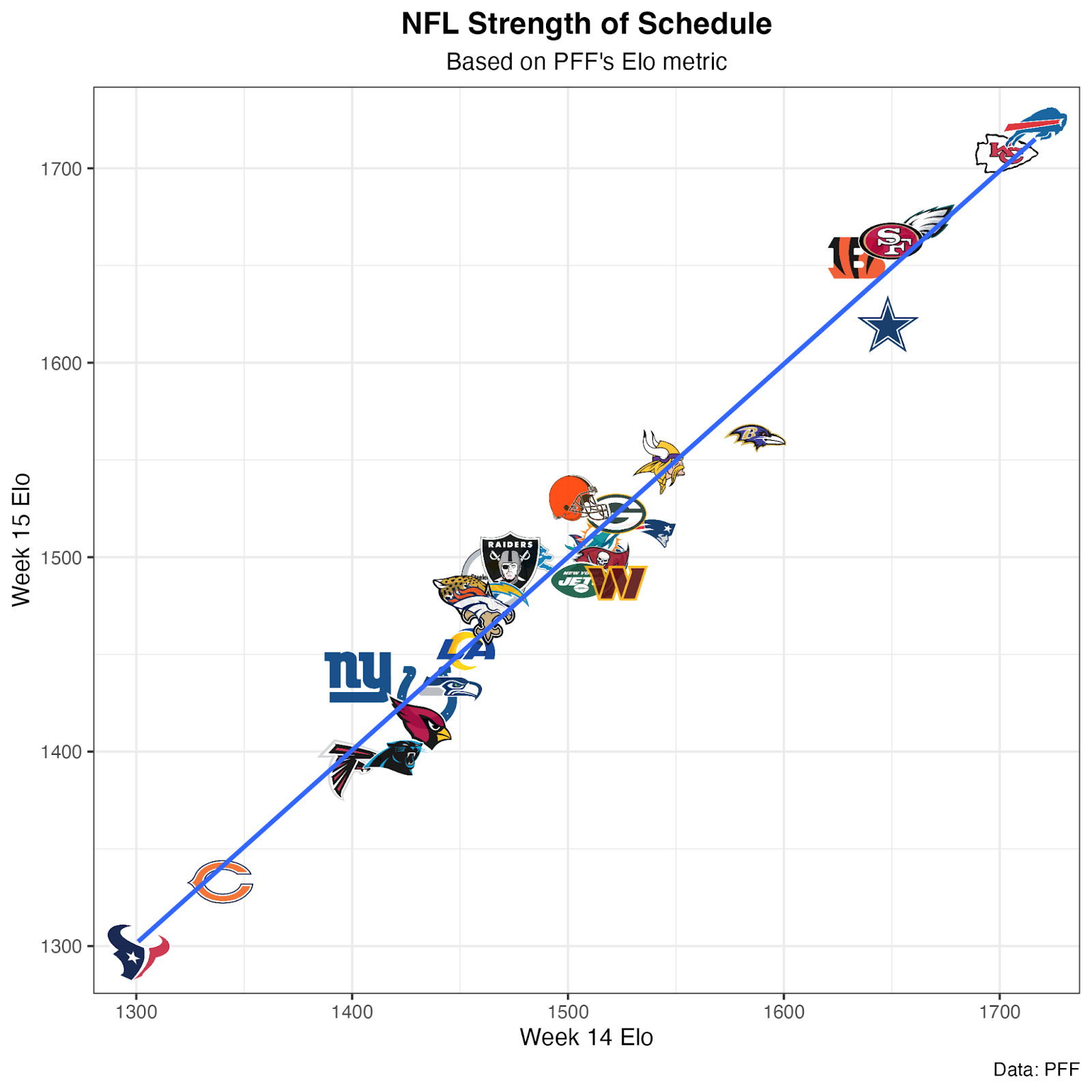 After an impressive come-from-behind victory against the Cowboys this past Sunday, the Jaguars are the biggest riser in our power rankings.

QB Trevor Lawrence is the highest-graded quarterback in the league since Week 9, and he's led a top-three passing offense in EPA per play over that span.

Over the last sixth games, the former No. 1 overall pick has recorded 16 big-time throws and has five 79.0-plus PFF passing grades.

The Jags are right behind the Titans in the AFC South. However, if they win out and beat the Titans in Week 18, they will make the playoffs as the No. 4 seed. Given that the Titans are a.) in the midst of a three-game losing streak, b.) getting more injured every week and c.) yet to play the Cowboys, there’s a solid chance the Jaguars will snatch the division title right at the end.

Several teams dropped down the rankings this week for various reasons.

The Titans are on a three-game losing streak and are losing players to injury each and every week. With the postseason looming, they are trending in the wrong direction and will need an end-of-season resurgence to keep the Jaguars from sneaking in over them.

The Seahawks have fallen back down to Earth. While Geno Smith is still the odds-on favorite to win Comeback Player of the Year, his production and grading have dipped since Week 8. The Seattle defense still struggles to string together stops, and the team is now sitting outside the playoff picture after consecutive losses.

The Commanders lost to the Giants at home in a game the Giants mostly controlled. Taylor Heinicke’s story is fun, but the bottom line is that he has just one passing grade over 70.0 this year. With his full complement of receivers, he averaged -0.16 EPA per dropback against a secondary that was without its highest-graded player.

Major loss for the Colts: Star running back Jonathan Taylor is out for the rest of the season with a high-ankle sprain. He was utilized on 41.2% of the Colts' designed run plays this season. Despite his workload, injuries have limited him to just 0.079 WAR this season, 27th among running backs.

Lose-lose for the Seahawks: Wide receiver Tyler Lockett broke his finger in the Week 15 loss to the 49ers. He will be out for at least two weeks. The veteran pass-catcher is second to only D.K. Metcalf on the team in adjusted target percentage (25.1%) this season, and he ranks 15th at the position in PFF WAR (0.340).

Bills OL woes: Center Mitch Morse suffered a concussion against the Dolphins last week and will need to clear concussion protocol. He’s 20th among centers in PFF grade this season (62.8) and 23rd in PFF WAR (0.042).

Eagles' quarterback change: Jalen Hurts is dealing with a sprained shoulder and is questionable for Week 16. The Eagles quarterback is the fourth-highest-graded passer in the NFL and ranks eighth at the position in PFF WAR (2.614). His replacement, Gardner Minshew, has earned a 59.4 PFF grade across 25 snaps this season.

The good news is that tight end Dallas Goedert is expected to return this week. Despite missing a large part of the year, Goedert is still eighth among tight ends in terms of WAR (0.234). Before his injury, he was second on the team in receiving yards (544) and hauled in three receiving touchdowns. 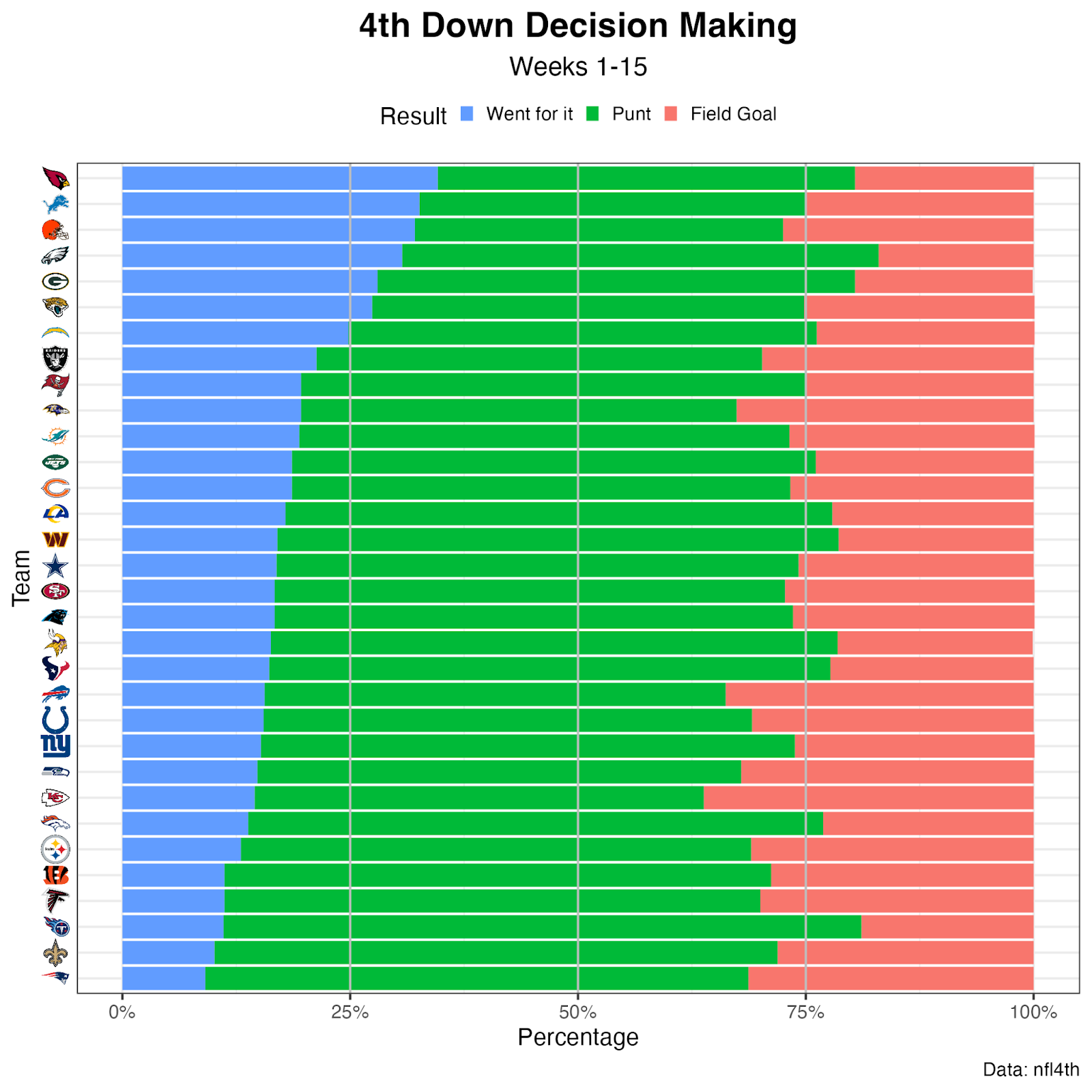 Kicking away the game: The Colts kicked five field goals in their loss to the Vikings this week. Had they opted to go for it more often, they may have kept their lead. We’ve seen how teams such as the Lions have become aggressive on fourth downs, and the Lions' 6-1 record over the past seven weeks reflects that aggressiveness.

Keeping it old school: New England punted five times and kicked three field goals in their Week 15 loss to the Raiders. They’ve gone for it on just 9% of their fourth-down plays, the lowest rate in the league.

No luck for Cleveland: The Browns kicked four field goals in their win over the Ravens, two of which were missed. This resulted in the second-lowest field-goal and extra-point grade (37.8) by a team this week, above only the Chiefs. 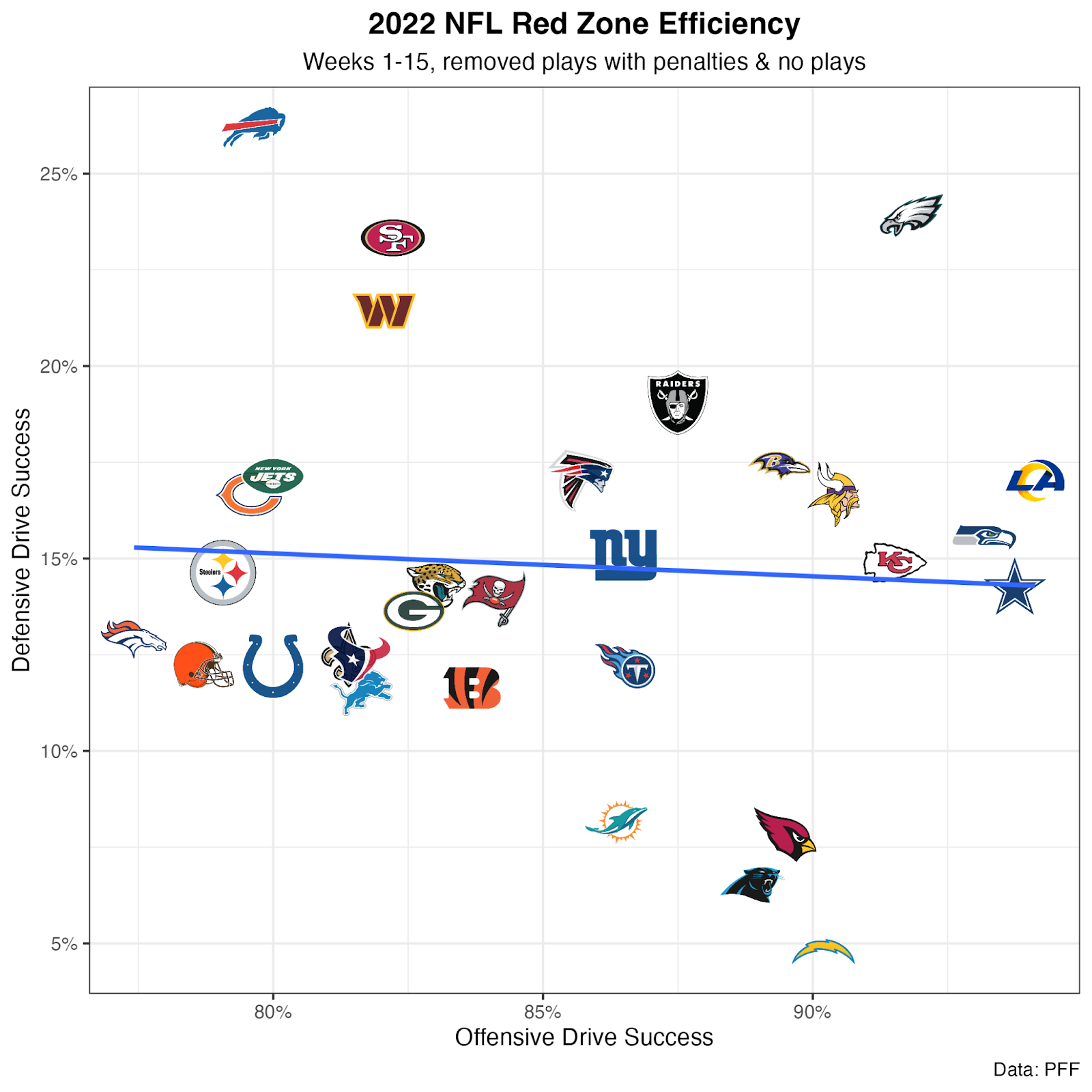 The Bills slowing down on defense? Eleven teams have been unable to stop their opponents in the red zone over the past three weeks. The Bills are one of these teams despite having been the most successful red-zone defense over the whole season.

49ers peaking at the right time: The 49ers have been the best at stopping opponents in the red zone since Week 10, having stopped 36.4% of their opponents' red-zone drives.