Kirk Cousins is at his best when the whole nation watches

The stakes are as high as they can get. Overtime in a playoff game in one of the loudest stadiums in the country. If he fails to score, one of the greatest quarterbacks to ever play gets the ball back and needs only a field goal to end his season. He takes the snap under center, fakes a handoff to his running back and scans the field. He sees the free safety's eyes and shoulder turned towards Stefon Diggs’ post route and Adam Thielen gaining just a step on his man on his corner route. Kirk Cousins lets it fly and throws a perfect pass 50 yards in the air and into Thielen’s hands — a textbook example of a big-time throw. The Vikings fail to punch it in at the goal line on two consecutive runs, so Cousins is asked to save the day. A perfect fade to Kyle Rudolph later, and the Minnesota Vikings — road underdogs by more than a touchdown — have moved on to the divisional round.

Cousins went 4 of 5 for 63 yards and the game-winning touchdown on said drive, delivering when all eyes were on him and when his team needed him the most. But according to public perception, this was a rare occurrence, as an 0-9 record on Monday Night Football as well as an 0-1 playoff record prior to this season has helped shape the narrative that the lights are just too bright for Cousins when the whole nation is watching.

Kirk Cousins is 43-36-2 since he became a full-time starter for the Washington Redskins at the start of the 2015 season, but he's only 8-15-1 in prime-time games (or island games), which we define as any game that was not slated on Sunday afternoon. So, does this mean Cousins has played significantly worse in those games? To investigate this, we looked into the data and found that to be false, and according to our PFF passing grades, it is even the other way around.

Cousins has actually played very well when the lights have been brightest, and he's actually been a mostly mediocre quarterback on Sunday afternoons. Interestingly, though, his efficiency in terms of expected points added per pass play is only slightly better in the prime-time sample, which suggests that his supporting cast hasn’t helped him as much in prime-time games. 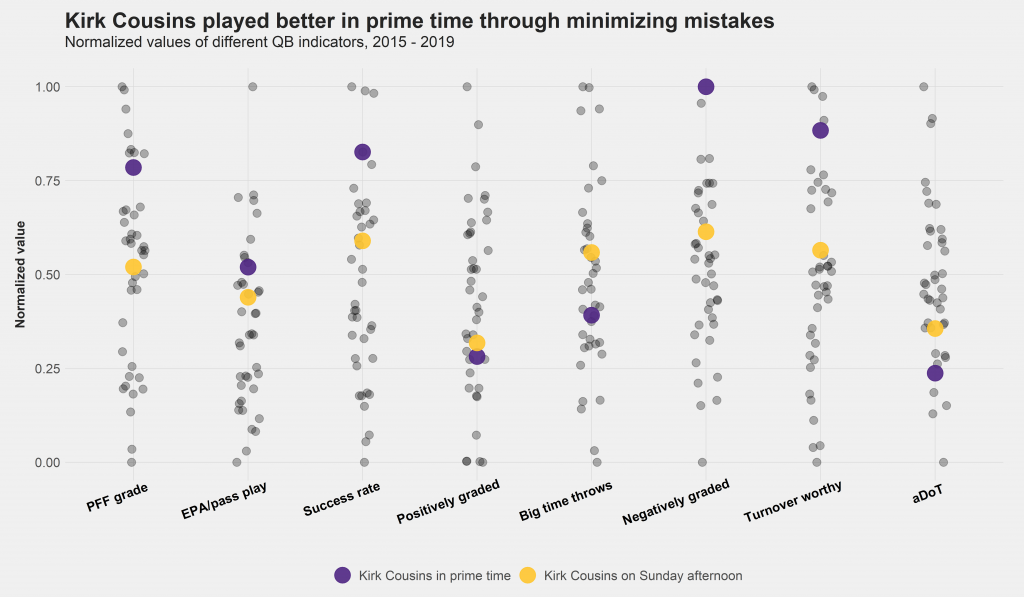 We want to take a closer look at Cousins' play in prime-time games compared to all other games through the chart above, which shows various measurements of quarterback play normalized to a scale between 0 and 1 (for measurements indicating bad play, 1 means the lowest rate). We note that he might indeed change his style to a more conservative approach in prime time (shown by the purple dots). And while his rate of positively graded throws is almost the same, he has produced fewer big-time throws most likely because of a lower average depth of target. However, he's easily made up for this by avoiding mistakes better than any other quarterback, as his rate of negatively graded throws is the lowest in the league when he is playing in prime time. He has also mostly avoided turnovers.

His supporting cast has performed worse in prime time

So, if Kirk Cousins hasn’t played worse, why has he lost so many prime-time games? Well, the answer is simple: Things he can’t control haven’t gone in his favor. 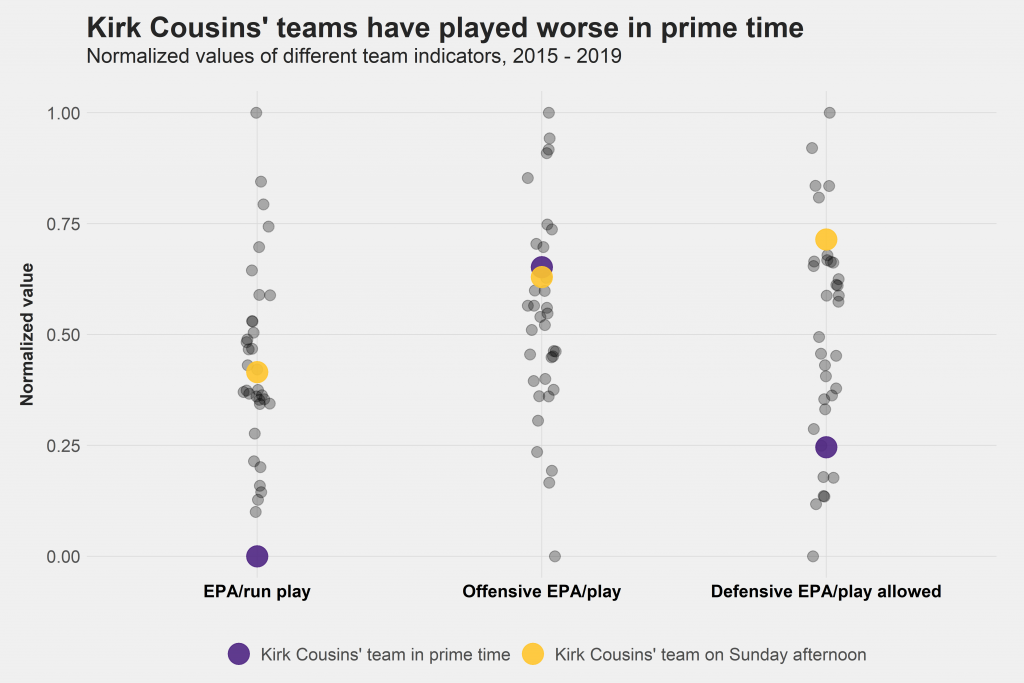 No team has been worse at rushing the football in prime time than Kirk Cousins’ teams (the Redskins from 2015-17 and the Vikings since 2018). This has led to his offense posting the same efficiency in both samples, even though the passing offense was better in prime time, as we see above.

Offensive efficiency, in particular, can’t explain the discrepancy in the win-loss column, but the defensive performance apparently solves the riddle. On Sunday afternoons, Cousins has been used to watching his defense overwhelm the opposing quarterback, but opposing offenses have been largely successful against the Vikings in prime time. This is not surprising, and it's also not necessarily the defense’s fault. A defense is more of a function of the opposing offenses that they face, and, naturally, teams face better offenses and better teams in prime time.

Our data confirms this intuitive statement, as the average PFFELO of Cousins’ opponents in prime time has been 55 points higher than in Sunday afternoon games, and the average career grade of the quarterbacks who have thrown passes against Cousins’ teams in prime time is on the level of Tony Romo and Deshaun Watson while opposing quarterbacks on Sunday afternoon have been on the level of Sam Bradford and Marcus Mariota.

The narrative that Cousins can’t deliver when the lights are set on him is not true, though we have found that his decision-making might be suboptimal.

Kirk Cousins is a quarterback who likes to play it relatively safe, as his rate of positive plays and depth of target is below average while he is above average at avoiding negative plays. When you face tougher offenses that can score more points on your defense, you should adjust your aggressiveness towards being more willing to take risks and hence make more positive plays.

A large reason why the narrative exists is that people tend to forget good performances, especially when they come in losing efforts. On Thanksgiving Day in 2016, he played in Dallas against arguably the best team in the NFL at that point and posted an 85.5 passing grade and generated 0.46 EPA per pass play only to see Dak Prescott outperform him to the tune of an 87.6 passing grade and 0.48 EPA per pass play. The Redskins lost 31-26. In 2017, Cousins’ Redskins played two prime-time games in a row against the 2-0 Raiders and 3-0 Chiefs. Over that two-game stretch, no quarterback earned a higher passing grade than Cousins (90.4), and while they blew out the Raiders on SNF, they lost to the Chiefs on MNF because Alex Smith (who graded out worse than him on that day) maneuvered a game-winning drive after the Redskins tied the game with 45 seconds left in the fourth quarter.

In all likelihood, more people will remember 2018 Thursday night game in Los Angeles when the Vikings offense played a very good game but had the bad luck to run into the perfect storm that was the Rams offense, as Jared Goff played the best game of his career and earned one of the highest single-game grades games of the PFF era (2006 – present).

While we have found that the sweeping narrative is not even true descriptively, we shouldn’t read too much into this split from a predictive standpoint, which is something the 10 commandments of numbers-based football analysis have taught us.

For the playoff game in Santa Clara, this means we should consider both Kirk Cousins’ performance in 2019 along with his career performance when assessing his chances to play a good game against one of the best defenses in the league, and it means that we should mostly ignore prime-time splits.

In an earlier piece, we’ve found that Cousins' performance can be expected to be roughly the same as Jimmy Garoppolo‘s. However, the Vikings play on the road, they haven’t enjoyed the rest that accompanies a playoff bye, they have been an overall worse team in 2019 and at least one of their two star wide receivers is listed as questionable. These factors have our PFF Greenline model favoring the 49ers by six points, translating to a roughly 30% win probability for the team in purple.

If the more likely event occurs and San Francisco advances to the NFC Championship game, remember that’s not necessarily proof that Kirk Cousins is unable to play quarterback when the whole nation is watching him. Though, on the other hand, if the Vikings pull off the upset on the back of a strong performance by their quarterback, well, their fans would sure like that.