Unsustainable Luck: Which NFL teams can expect better or worse luck in 2020?

Many of the things that significantly impact the outcome of football games have a great deal of variance when measured either year-over-year or versus an expectation.

When projecting how teams will do in 2020, it’s important to look back at 2019 and see which teams were particularly lucky or unlucky in these kinds of situations, as we should expect a team’s luck to be closer to the mean in 2020.

A quarterback’s decision-making and accuracy on a throw tell us the measure of his skill on the play — not the box score stat of whether an interception actually occurred. To separate the two, we can use PFF’s turnover-worthy plays metric, which is stable from year-to-year. Here, we’ll limit the analysis to dropbacks that include a pass attempt in order to focus on whether a given pass merited an interception. 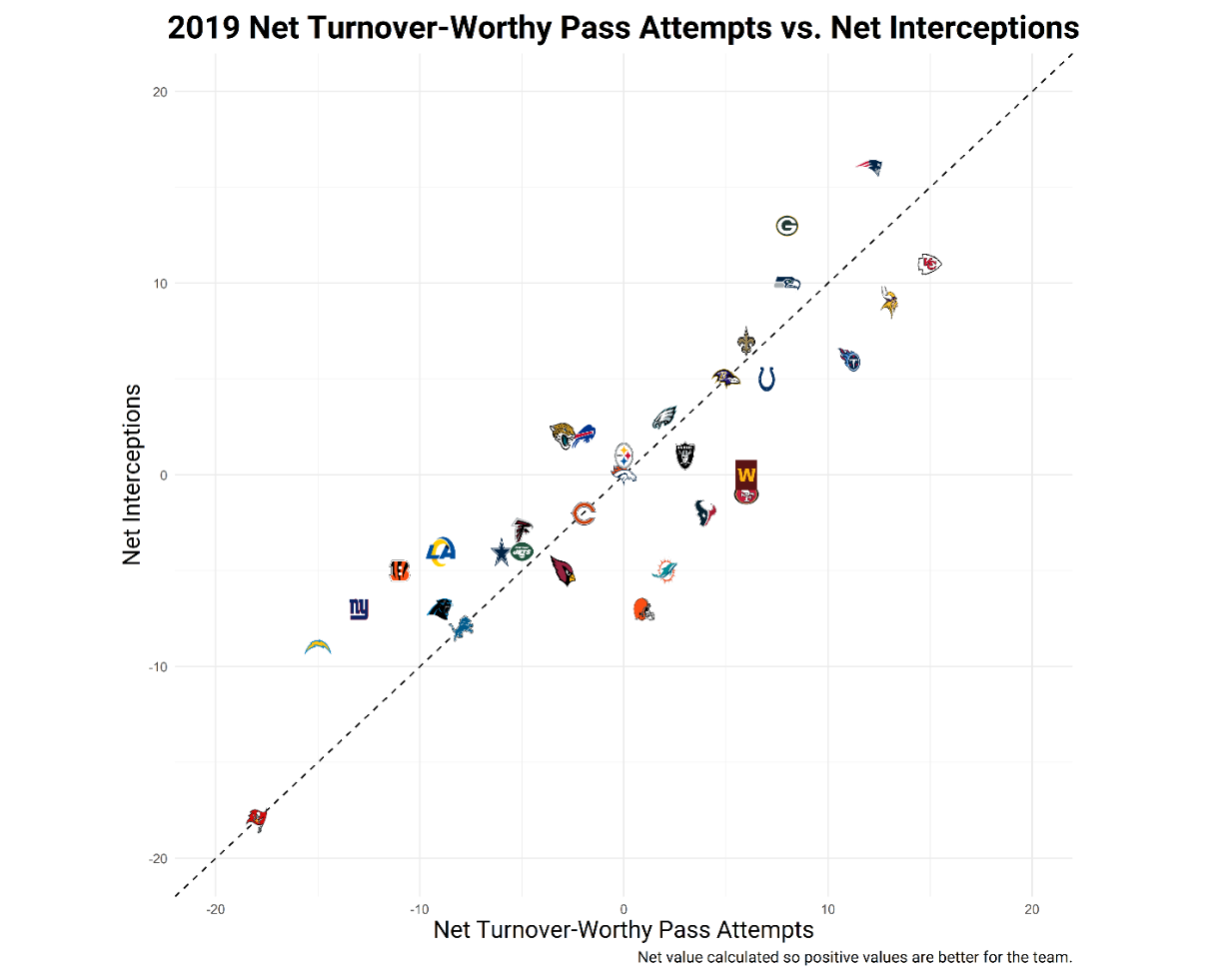 Teams above the dashed line such as the New York Giants and Green Bay Packers benefited from favorable interception variance, while the teams below it like the Cleveland Browns and San Francisco 49ers should improve upon this next year.

As PFF’s Timo Riske demonstrated, while individual kickers can be skilled, a kicker’s field goals above expectation in one season is not predictive of how he will perform the following season. (Except, perhaps, if your kicker’s name is Justin Tucker.)

The following chart reproduces Riske's analysis but looks at team kicking rather than an individual kicker. Additionally, we’ll look at both sides of the ball by taking a team’s own field goals above expectation and subtract the field goals above expectation of the opposing team for a net metric. (There is little signal here, the R^2 of this for a team year-over-year is only 0.01.) Teams above the line were fortunate, teams below it were not. 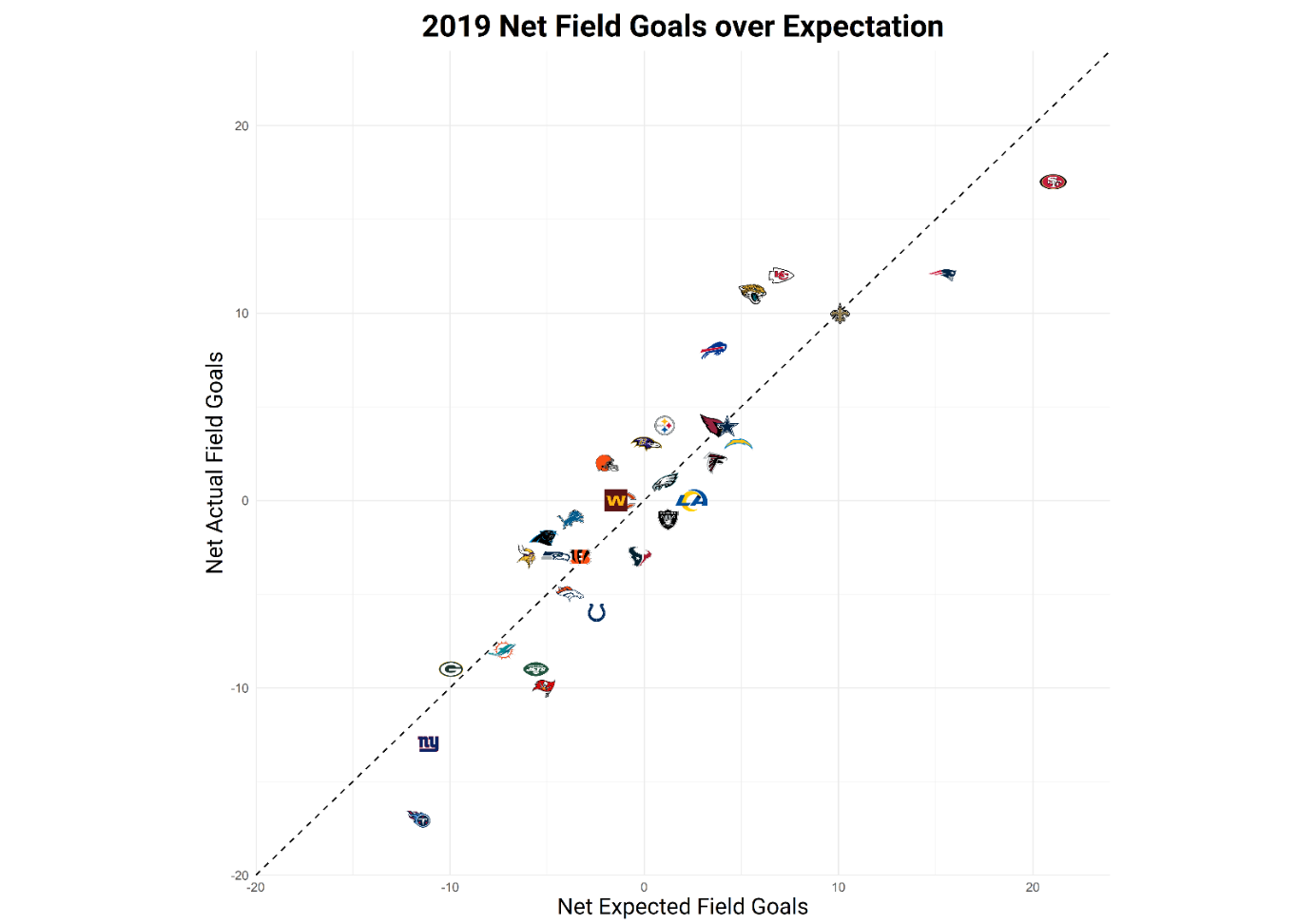 The team benefiting most from field goal variance, the Jacksonville Jaguars, had almost 5.5 net field goals above expectation. That works out to a difference of 16.5 points, which can easily affect a team’s record given the number of close games in the NFL.

Some players are more prone to fumble than others, but once a player has fumbled, there is variance in the recovery. (The year-over-year R^2 of the number of times a team fumbles the ball is 0.11, while it’s less than 0.001 for recovery rate.) This data makes sense, as once a football is loose, it can bounce in any direction and any player can easily grab it.

Naturally, some teams are going to be lucky and recover most of the fumbles in their games, while other teams will be unlucky when their opponents recover the majority. In both cases, teams are more likely to have a recovery rate closer to 50% the following season.

Defensive pass interference penalties are a huge benefit to the offense, providing an automatic first down and a spot foul — they average an EPA of 1.70. They’re also high-variance, in part because of the inherently subjective judgment required by game officials in determining whether to throw the flag.

While the number of accepted penalties in the aggregate show some year-over-year signal (R^2 = 0.18 for one’s own penalties, R^2 = 0.11 for opponent penalties), there is very little when focusing on defensive pass interference in particular (R^2 = 0.03 for both).

Looking in the table below at a team’s net defensive pass interference penalties — defined as those committed by the opposing defense while on offense minus those committed on defense — will help us understand which teams benefited from this variance.

For example, the Pittsburgh Steelers were extremely lucky on fumble recoveries in particular and at least somewhat lucky on the other metrics. Unfortunately, the Steelers did suffer a horrible piece of luck not captured here — the early-season injury to quarterback Ben Roethlisberger. His return has to be measured against regression in these metrics.

Another lucky team in these metrics was the Buffalo Bills — the team was fortunate in every category, but particularly with respect to field goals above expectation. We cannot expect the Bills be as lucky again in 2020.

On the other side of variance on these metrics are two other AFC East teams, the Miami Dolphins and New York Jets. Both are quite negative on several metrics while none show good fortune. This is unlikely to go against them again in 2020. The San Francisco 49ers are in a similar camp, with particularly bad interception luck.

The Tennessee Titans had noticeably bad luck on interceptions, field goals and defensive pass interference penalties. While this is partially offset by their good fortune in fumble recoveries, on balance we would expect the other factors in combination to be worth more.

These metrics don’t and aren’t meant to comprise all of a team’s luck, let alone all of the offseason activity we also must take into account when projecting a team from one season to the next. But this type of analysis allows us to examine teams that benefited from variance in ways we might not have realized when looking back at a season and project more accurately in the next one.