NFL scores and recaps for every Week 6 game

PFF broke down the numbers immediately after every NFL Week 6 game, including scores, rookie standouts, offensive line performances and more. 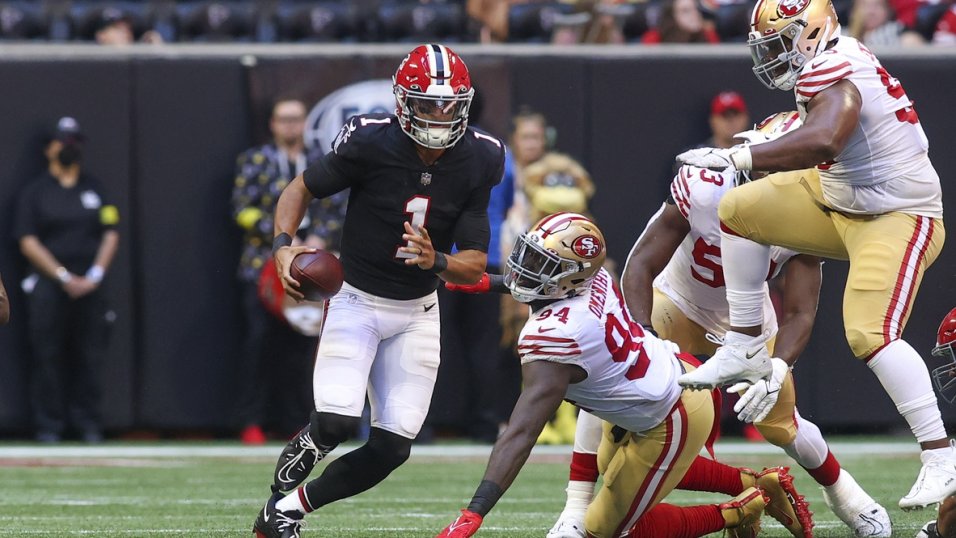 Offensive spotlight: Marcus Mariota‘s efficiency on the ground and through the air was on full display in Week 7, totaling three total touchdowns, 188 yards of total offense and an 84.5 rushing grade to help set the tone for the Falcons' bruising offensive playstyle.

Defensive spotlight: Isaiah Oliver only allowed three catches for 21 yards from three targets into his coverage. When he did get his hands on the football, it was an interception that helped elevate his coverage grade to a 79.9, on first review. 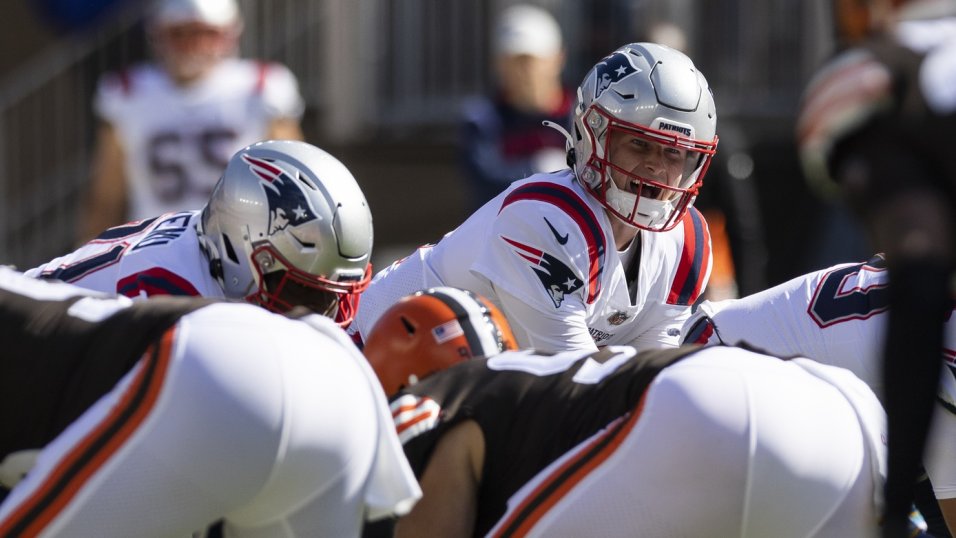 Offensive spotlight: Zappe went 24-of-34 for 309 yards with two touchdowns and zero interceptions. Based on PFF's first review, he got rid of the ball at an average 2.61-second clip. He didn’t make any big-time throws but also wasn’t marked with any turnover-worthy plays. The Patriots made effective use of play action, as Zappe went 6-of-7 for 144 yards and a touchdown with a play fake. Zappe was also penalized for delay of game and intentional grounding, so it wasn’t all positives from the rookie, but it was still an impressive display in just his second career start.

Defensive spotlight: Browns edge defender Myles Garrett was battling through injuries during the game but finished with two sacks, including a strip sack, and three hurries. He finished the game with a game-high 24-percent pass-rush win rate. 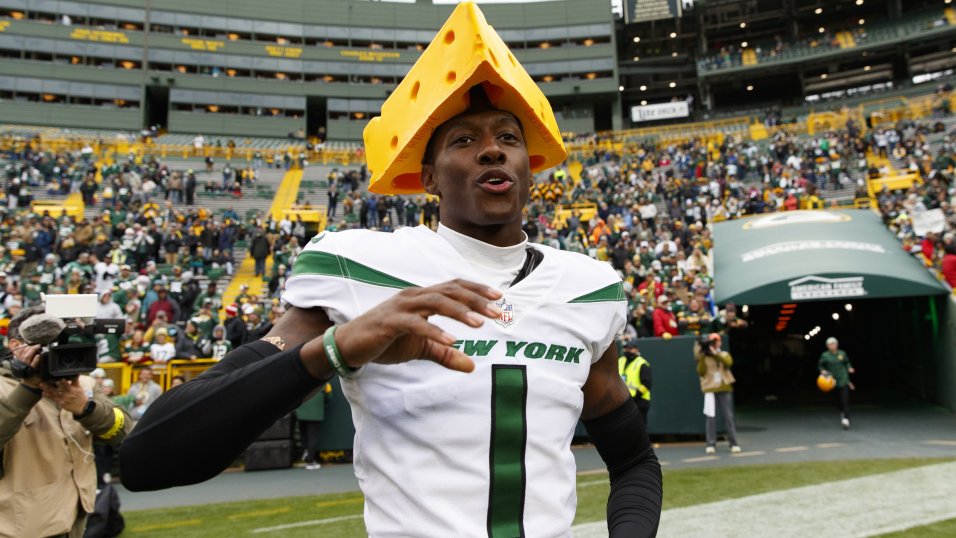 Offensive spotlight: This was every Packers fan's exact worry after Davante Adams was traded away over the offseason. The Packers had no one making plays on the outside and even when they did, they couldn’t hang onto the ball. The Packers' skill players combined to drop five of 34 catchable passes on the day.

Defensive spotlight: Quinnen Williams was a nightmare for the Packers interior line. He finished with five pressures, including two sacks, and added three more stops in the run game. After he was much maligned his first three seasons with the Jets after being the No. 3 overall pick, Williams is finally living up to those lofty expectations. 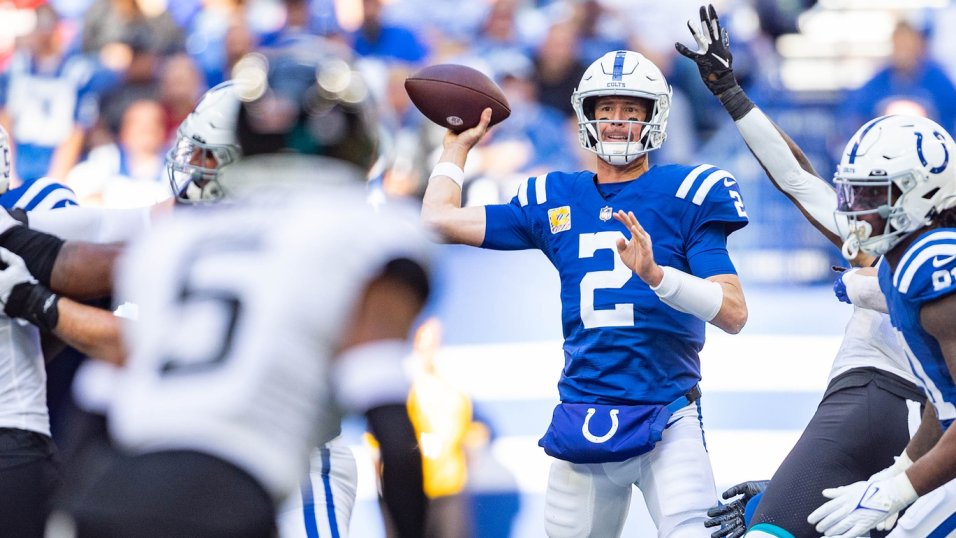 Offensive spotlight: Welcome back, Matt Ryan! Colts fans saw the former MVP quarterback they thought they were getting this offseason. He finished 42-of-58 for 392 yards and three scores. He made only his second big-time throw of the season when it mattered most.

Defensive spotlight: It was a roller coaster game for last year’s big-money free agent signing Shaquill Griffin. While he finished with three forced incompletions, Griffin also allowed nine catches from 13 targets for 131 yards, and he committed two penalties in the process. Offensive spotlight: Teddy Bridgewater entered the game after 21 snaps from Skylar Thompson and completed 23-of-34 attempts for 329 yards, two touchdown passes and two interceptions. He averaged over 9.0 yards per attempt, but his turnovers were critical.

Defensive spotlight: Za’Darius Smith had his best game as a Viking against a weak Miami offensive line. Smith finished with a 33.3% pass-rush win rate, notching multiple sacks in the game. 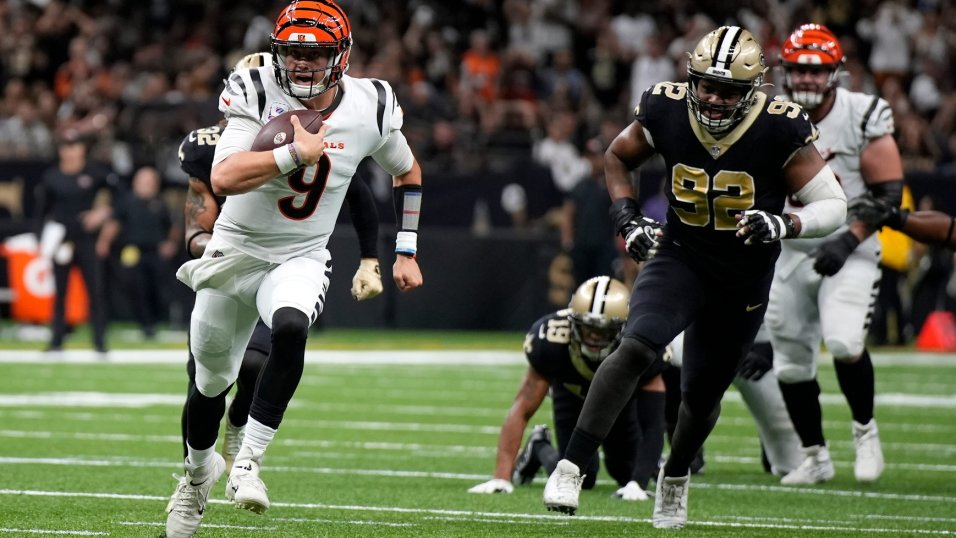 Offensive spotlight: In a game that bore a closer resemblance to his performances last season, Joe Burrow completed 28-of-37 attempts for 300 yards and three touchdown passes. He averaged 8.1 yards per attempt, and three of his passes were dropped by his receivers.

Defensive spotlight: Saints cornerback Paulson Adebo has been targeted early and often this season, and the ball came his way 11 times in this game. He allowed eight catches for 74 yards and a touchdown. 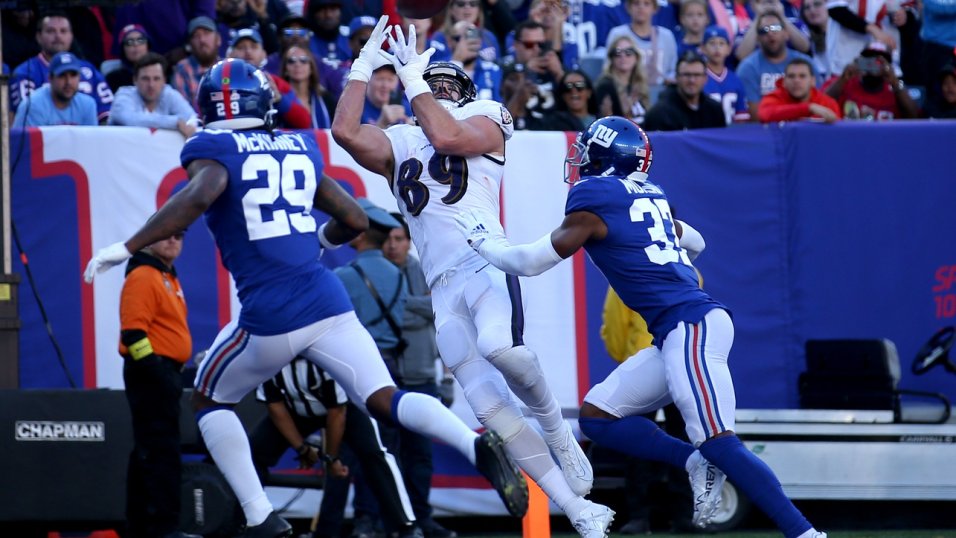 Offensive spotlight: It came in a losing effort, but Mark Andrews continues to serve as the clear-cut top target in Baltimore’s passing attack. Andrews was the only player on either offense to draw more than five targets, and he more than doubled that total with 11. Andrews dropped two passes on initial review, but he brought in both of his contested targets and came away with four receptions of at least 15 yards. Jackson was once again looking for him downfield, as Andrews’ 11 targets came nearly 15 yards downfield on average.

Defensive spotlight: Dexter Lawrence has been one of the more disruptive defensive tackles in the NFL this season, and that proved to be the case again here against Baltimore. His five quarterback pressures, on initial review, were tied for the most of any defender in the game. Lawrence wasn’t charged with any negatively-graded plays against the run on PFF’s initial review, either. Offensive spotlight: Given the context of the game, the offensive spotlight has to go to Steelers quarterback Mitchell Trubisky, who came into the game after Kenny Pickett was evaluated for a concussion. Trubisky went 9-for-12 with a handful of key third-and-long passing conversions on the way to a win.

Defensive spotlight: The best defensive player for either team was Steelers defensive lineman Cameron Heyward, who was had his way with Bucs rookie offensive guard Luke Goedeke, generating three pressures, two hurries and a sack while dominating his area of the line of scrimmage. Offensive spotlight: This game's biggest story was what went down on Carolina’s sideline, as wide receiver Robbie Anderson didn’t receive a single target on his eight routes and wasn’t very happy about it. It escalated to a point where Anderson was actually kicked out of the game by interim coach Steve Wilks.

Defensive spotlight: The Panthers linebackers performed at a high level against the Rams. Both Shaq Thompson and Cory Littleton posted 90.0-plus grades on first review.

Thompson was flying around the football, finishing with three tackles for loss or no-gain, while Littleton made his impact felt on passing plays, notching four coverage stops. That wasn’t the only way he affected Rams receivers, either. Offensive spotlight: Walker made his first NFL start and didn't disappoint with his opportunity, as the rookie back forced 10 missed tackles, rushed for five first downs, amassed 63 yards after contact and ran for a score on a team-high 17 rush attempts. Offensive spotlight: Bills WR Stefon Diggs caught all 10 of his catchable targets for 148 receiving yards, one touchdown and seven first downs. He Went 2-of-2 for 61 yards on passes of 20 or more air yards and generated a near-perfect 145.8 passer rating on the day.

Defensive spotlight: DI Chris Jones was charted with only two pressures on first review, but he piled up nine additional pass-rush wins that didn't quite result in a QB pressure. Offensive spotlight: Neither Dallas nor Philadelphia was able to generate a high rate of explosive plays, but the Eagles did enough for the win thanks to their option offense.

For the Cowboys, this game made them want a healthy Dak Prescott more than ever. Backup QB Cooper Rush struggled for the entirety of the game. On throws of 10 or more yards, he went 4-of-14 for 57 yards and three interceptions.

Chargers QB Justin Herbert passed the ball pretty well against a tough Broncos defense throughout the contest, finishing 37-of-57 for 238 passing yards and an interception. He struggled to push the ball downfield, totaling 4.2 yards per attempt and posting a 5.9-yard average depth of target, but he was able to generate one big-time throw en route to a 75.0-plus passing grade on first review.

Broncos QB Russell Wilson started off hot, flashing some of the traits that enticed the Broncos to acquire him in the first place, but quickly cooled down, causing the Broncos offense to struggle for most of the second half. Wilson finished 15-of-28 for 188 passing yards and a touchdown. To his credit, he was able to complete multiple explosive (15-plus yards) gains, but he struggled to do much outside of that, and Denver's offense sputtered as a result.

Defensive spotlight: Broncos cornerback Patrick Surtain II continued his impressive play in coverage, as he spent most of the night covering Chargers No. 1 receiver Mike Williams and yielded only one reception for four yards despite four targets. Additionally, the low number of targets aimed at the second-year cornerback was also a result of his tight coverage throughout the game. Surtain has yet to allow a touchdown this year and has only allowed multiple first-down receptions once through six games.