After only two NFL preseason games, the New England Patriots’ quarterback competition has intensified, with every display from first-round draft pick Mac Jones only adding further fuel to the fire. A rookie who was supposed to ease into the NFL behind veteran Cam Newton looks ready to play already.

Much of the pre-draft scouting process was focused on what Jones couldn’t do. Very little time was spent analyzing what he actually excelled at, which is a shame because his final campaign at Alabama last year was one of the finest college seasons ever seen.

Jones posted an overall 95.8 PFF grade in 2020 on his way to winning a national title. That overall mark is higher than any single season grade from any of the past three No. 1 overall draft picks (Baker Mayfield, Kyler Murray and Joe Burrow) in their college careers.

It’s the highest single-season overall grade PFF has ever given to a college quarterback, and that would be a pretty good starting point to talk up a player’s potential at the next level in any normal year. In a draft where Jones was being directly compared to near-flawless prospects like Trevor Lawrence, or players whose athleticism and physical tools are off the charts, the focus instead shifted to where he was deficient.

Jones is just an average athlete compared to the rest of the 2021 first-round quarterbacks, and that athleticism paired with his underwhelming physique became the focus. The idea of his mental traits and accuracy potentially offsetting those negatives became an afterthought. Back in April, I argued that they do, and the first glimpses of Jones in the NFL backs that up.

Through two preseason games, Jones has already shown that his mental traits and accuracy still play at this level. Obviously, preseason is a step down from the regular season, but it’s all there is to judge at this point. Jones currently has a 92.4 overall PFF grade, the second-best mark of any quarterback, although most of the Week 2 games are still to come. His adjusted completion rate is 80.6%, showing that his accuracy remains potent after a stellar Alabama career. 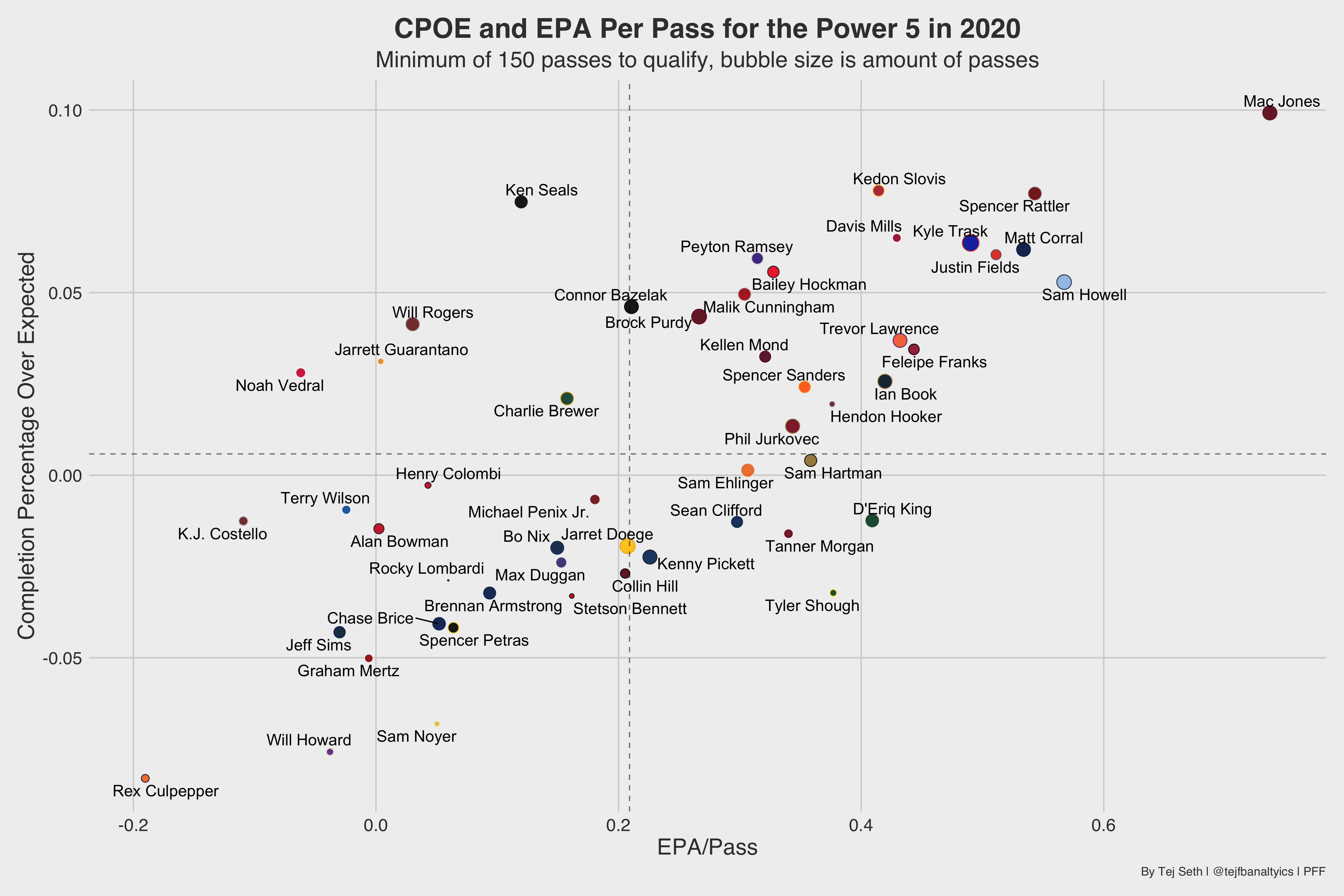 So far, only Jacob Eason has thrown a lower rate of uncatchable passes than Jones this preseason, and Jones has yet to make a turnover-worthy play. A glance at the box score would show he also has yet to register a passing touchdown, but that would belie some of the best throws he has made, many of which have come up incomplete. In Jones’ debut against the Washington Football Team, his best throw beat a defender and landed in the hands of his intended receiver in the end zone, only to fall incomplete. Against the Philadelphia Eagles, he hit a bomb down the sideline to N’Keal Harry, yet the third-year wideout failed to complete the diving catch.

The Patriots have also put Jones in challenging situations, presumably to see if his demeanor remains calm and cool as pressure mounts. Jones has run drives in the hurry-up offense and from backed up in his own end zone. In each situation, he has responded and looked as in-command of the offense as at any other time.

This week, Newton actually put together an impressive performance himself, at least fighting back against what seems a growing weight of evidence that Jones can start right away. Newton earned an 87.4 overall PFF grade and delivered some strikes, certainly aided by the strength of competition (or lack thereof) the Eagles provided. Newton had all day to survey the defense and find an open receiver, averaging over 3.0 seconds per attempt, but unlike the first preseason game, his stock will have come out of this game enhanced, effectively setting the bar Jones needs to clear just a little bit higher.

From the Patriots’ perspective, Jones was drafted in the first round, which means he is the future at the position. The only thing that is unclear is when that future begins.

Rookie quarterbacks typically struggle the most with the mental adjustment to the next level. Only one first-year signal-caller over the past two seasons has averaged a time to throw below 2.6 seconds, a figure 16 veterans have been quicker than. The extra challenge that the NFL provides slows down their processing speed, and since that was Jones’ trump card in college, it stood to reason that a player with his style might struggle the most with the adjustment.

But Jones’ play thus far indicates that is not going to be the case. His average time to throw this preseason is 2.67 seconds, which is almost three-tenths faster than any other Patriots quarterback. The strengths that gave Jones an edge in college remain advantages to his game at the NFL level. If he is capable of running this offense as a rookie and delivering passes as accurately as he has been, it will take Newton’s best play since his MVP season (back in 2015) to keep Jones on the bench and away from the starting job.