Per a report from Josina Anderson, the Las Vegas Raiders have signed former Seattle Seahawks linebacker K.J. Wright to a one-year deal.

Free agent LB K.J. Wright just told me he is signing with #Raiders on a 1-year deal.

Wright is another late addition to the Raiders defense, as Las Vegas just picked up Gerald McCoy earlier in August and traded with the Carolina Panthers for linebacker Denzel Perryman.

According to The Athletic's Vic Tafur, Wright’s one-year deal is expected to come in around $4 million (we are still awaiting full contract details at this time and will update when available). Nevertheless, even this late in the offseason, a deal around $4 million is a bargain for a versatile player who can help solidify a young Raiders defense.

Wright is reunited with new Raiders defensive coordinator Gus Bradley, who was his defensive coordinator for the first two years of his career in Seattle (2011-2012). His familiarity with Bradley’s scheme might have been a point of attraction between the two parties. Bradley also coached the aforementioned Perryman with the Los Angeles Chargers, so he continues to bring in players he is familiar with on defense.

Even after Bradley left Seattle to be the head coach of the Jacksonville Jaguars, his successors (Dan Quinn, Kris Richards, Ken Norton Jr.) all utilized the same base Cover-3 scheme. Wright will continue his career playing in this scheme in Vegas, where he should be a helpful veteran presence on defense.

He joins a linebacker room made up of Cory Littleton, Nick Kwiatkoski, Nicholas Morrow, Perryman, and Tanner Muse. Littleton underwhelmed in the first year of his three-year, $35 million contract while Kwiatkoski only played 12 games due to injury, and Morrow started in his absence.

It has been reported by The Athletic’s Tashan Reed that Bradley seems to prefer playing Morrow at middle linebacker (MIKE) while keeping Littleton as the weak-side linebacker (WILL). The last spot in the linebacker room, the strong-side linebacker spot (SAM), appears to now belong to Wright, who played there last season in Seattle. 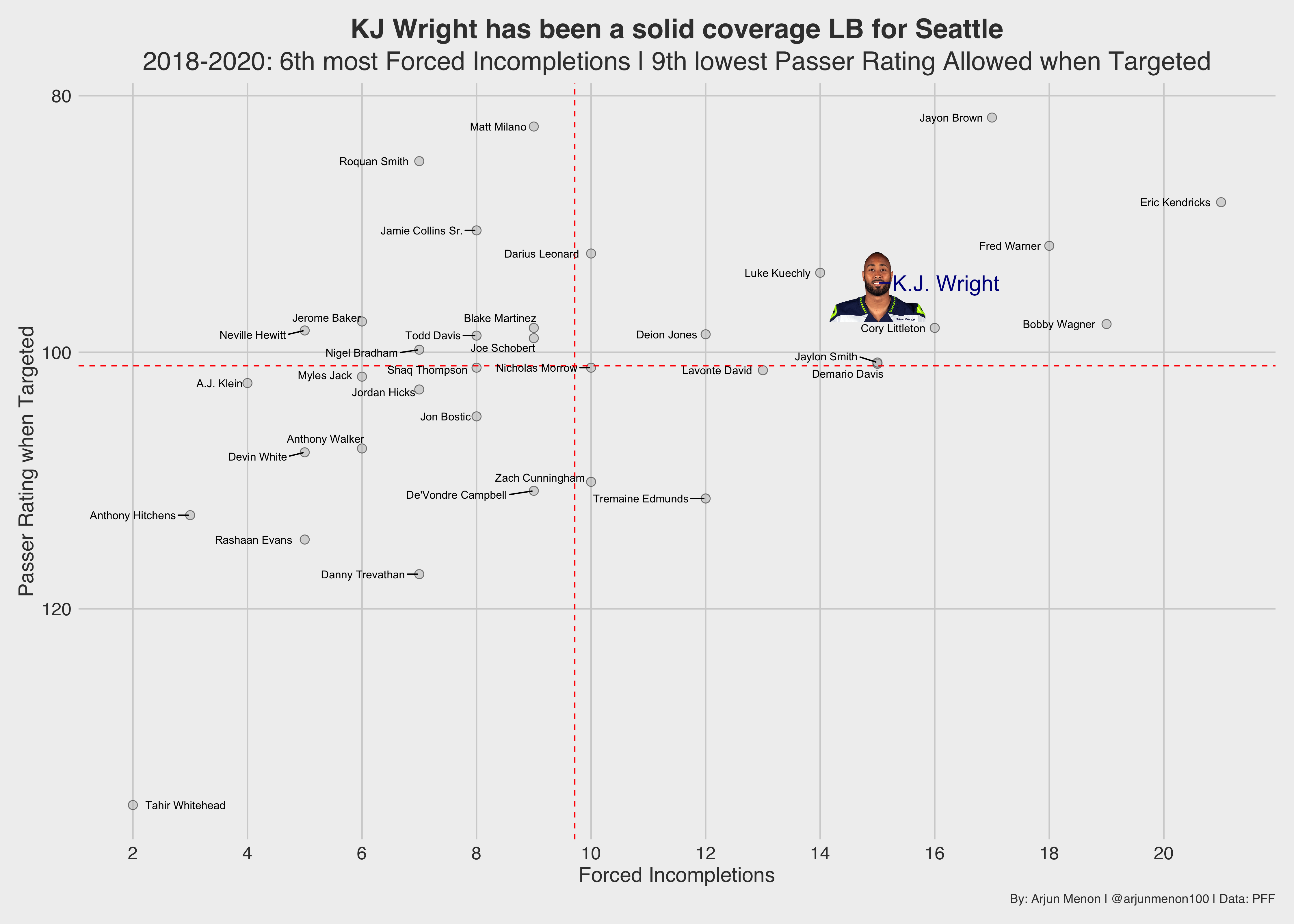 In Seattle’s defense, Wright formed one of the better linebacker duos in the league with Bobby Wagner. Wright primarily played right or left linebacker, as Wagner occupied the MIKE spot in Seattle’s Cover-3 defense. Thus, it would be logical to believe that Wright will be competing for the starting SAM spot in Bradley’s defense. Additionally, Wright had the ninth-best PFF grade among linebackers who played at least 200 snaps while Littleton had one of the worst. Wright’s solid play in 2020 combined with his wealth of experience in Bradley’s scheme could thrust him into a starting role when Week 1 rolls around.

From 2017-2020, Bradley had the second-highest dime personnel usage rate of any defense in the league. Alternatively, he had the third-lowest nickel personnel rate during that time period. However, one thing to keep in mind was that Bradley had pretty good pieces to use in the secondary back then. He played a lot of dime because he had defensive backs, such as Casey Hayward Jr., Desmond King, and Derwin James, who he wanted to be on the field as much as possible. However, the secondary in Vegas isn’t really the strong suit of the team. With the linebacker room getting deeper with Wright addition, we could see Bradley use more nickel personnel than he did in LA.

With the Wright and McCoy additions, the Raiders seem to be adding the finishing pieces they need to slow down the high-powered AFC West offenses, led by gunslingers Justin Herbert and Patrick Mahomes.