Looking back at the 2020 NFL Draft QB class: Jalen Hurts is still a long-term option for the Philadelphia Eagles

It’s never too early for NFL franchises to look forward to the next season, and there’s no more important position to figure out than quarterback.

On rare occasions, quarterbacks show all the traits of a franchise savior early in their careers, though the picture is often much murkier. In this analysis, I’m going to take a microscope to the performance of the 2020 quarterback class after two NFL seasons.

It won’t come as a surprise that the evidence overwhelmingly indicates that the Cincinnati Bengals and Los Angeles Chargers have found their long-term solutions in the forms of Joe Burrow and Justin Herbert.

The pictures for the other two starting candidates, Jalen Hurts and Tua Tagovailoa, are more difficult to interpret. The current buzz is that the Miami Dolphins will build around Tagovailoa going forward, and Philadelphia Eagles general manager Howie Roseman recently said Hurts had earned the starting role in 2022 after head coach Nick Sirianni evinced positivity about Hurts after a disappointing playoff performance.

The most important question for the Dolphins and Eagles is, how confident should they be in their current signal-callers? The best method I’ve found to forecast future quarterback performance is proportionally weighing NFL evidence in terms of PFF grades and per-play efficiency. For the latter, my preferred metric is expected points added (EPA), which puts a comparable points-based value on the results of every NFL play. By combining the two measures, I found more predictive power than using either individually and have applied the methodology to earlier quarterback classes and the New York Jets’ decision to move on from Sam Darnold last offseason.

The specific technique I’ll use here is updating the normal distribution of passing skill for each passer based on draft position (our prior beliefs) and his actual PFF passing grades on each play (our evidence). We are then left with a new distribution that includes the probabilities the individual passer will be of different skill levels (our posterior beliefs). 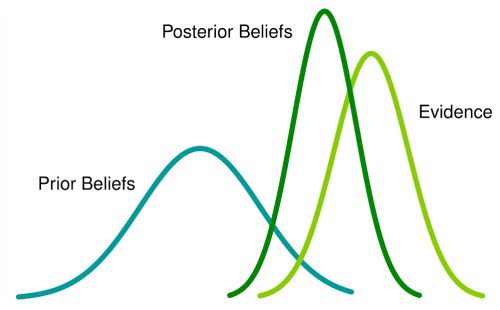 The more evidence we have, the closer our updated (posterior) beliefs match the evidence. In the case of quarterbacks who have only played two NFL seasons — the 2020 class, for example — we should currently view them somewhere between the average drafted quarterback and what they’ve shown so far.

It’s still possible for quarterbacks to be successful despite two years of poor results (see Josh Allen), or to struggle the rest of their careers (see Robert Griffin III). By having a measured approach to how much to move our opinion through time, we can better match our expectations to reality.

2022 NFL Playoffs Divisional Round: Are we positive it's possible to slow down Cincinnati Bengals QB Joe Burrow? via Ian Hartitz

Updating our forecasts through time

My favorite way to illustrate how Bayesian forecasts change through time is to plot our median — our best-guess forecast — over time.

The initial PFF grade forecasts for the 2020 class differs somewhat based on draft position, with the No. 1 overall pick Burrow having an initial median forecast around the 50th percentile for franchise quarterbacks and second-round pick Hurts being closer to the 25th percentile.