Hard to believe it was fewer than two years ago that five different quarterbacks were taken in the first round of the NFL draft, altering the fortunes of nearly one-sixth of the league. The Arizona Cardinals have moved on from former top-10 selection Josh Rosen, but the other four first-round selections are still viewed as the future for their respective franchises.

Baker Mayfield, the surprise (not to us) No. 1 pick for the Cleveland Browns, had to wait a few games to get into the action, but quickly took the league by storm, propelling his team to seven victories after notching none the previous year. The rosy outlook for Mayfield that made the Browns pr-season favorites to win the AFC North has faded with struggles in his second season.

The presumed top selection Sam Darnold fell into the lap of the New York Jets at No. 3. Darnold flashed down the stretch as a rookie, but a combination of poor health, new coaching, and lackluster surrounding talent left Jets’ fans with more questions than answers heading into his third season.

The Buffalo Bills traded up for Josh Allen at No. 7, and the sneaky athletic quarterback has mitigated troubles in the passing game with valuable designed runs and scrambles. Allen’s two nationally televised regular season appearances put his potential on the map for casual fans. Then a handful of head-scratching plays in the playoffs brought sentiment back down to earth.

With the last pick of the 2018 first round, the Baltimore Ravens put into motion a plan to replace their current starting quarterback and use a run-first scheme unlike any other in the NFL. Lamar Jackson was named Most Valuable Player by the Pro Football Writers Association this season and is the odds-on favorite for the Associated Press equivalent. Unfortunately for Ravens’ fans, a playoff run that began as the No. 1 seed ended in a disappointing exit, matching the results from last year.

While these quarterbacks have only been in the NFL for two seasons, each has shown varying periods of promise and struggle. The answer for forming the most accurate and measured opinions for these quarterbacks lies in parsing and weighing the evidence, particularly the advanced stats we have in the form of PFF passing grades and expected points added. This article will follow a similar layout to my recent reassessment of Carson Wentz and the rest of the 2016 class.

In this analysis, I’m going to go through the passing grades and dropback efficiency for the 2018 class to this point and forecast them going forward. We’ll form forecasts for their true passing ability in terms of grades and EPA by properly weighing results and priors, or pre-NFL expectations, based on their respective draft positions. The technique used is called Bayesian updating. I laid out a more detailed explanation about the methodology behind this analysis in a prior article when I applied it to the 2017 quarterback class.

Applying Bayesian updating to each dropback for the 2018 class rookies gives us a “best guess” forecast for true passing grade for each quarterback going forward, along with ranges of outcomes that reflects the confidence we should have in our assessments. The plot below shows the progression of the passing grade Bayesian forecast for each quarterback. 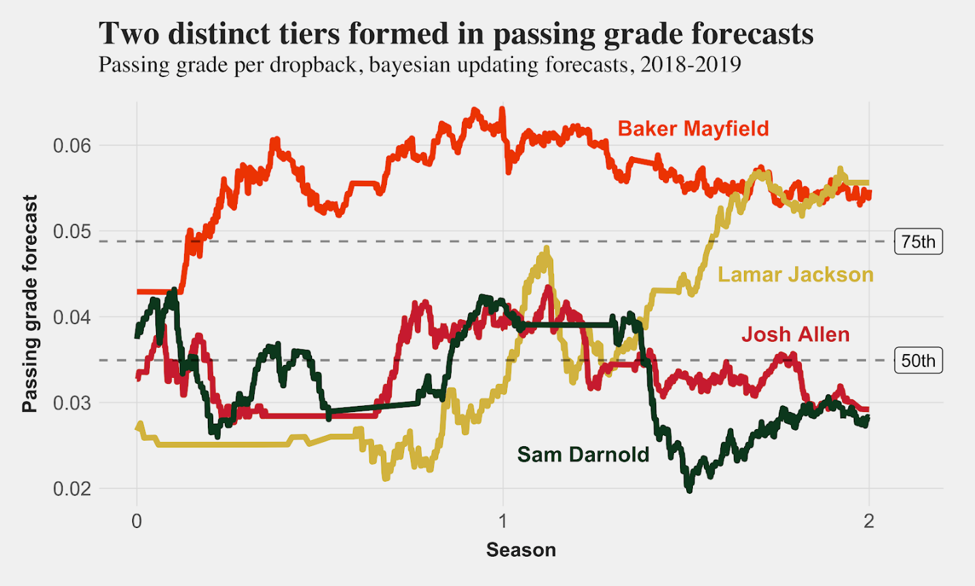 Mayfield started with the highest EPA forecast as the No. 1 pick, with Darnold, Allen, and Jackson trailing in that order. Mayfield’s passing grade forecast jumped almost immediately after being inserted into NFL action. He ended the season as the 11th highest-rated quarterback by PFF passing grade, ahead of established NFL quarterbacks like Wentz, Ben Roethlisberger, and Cam Newton. Allen and Darnold graded roughly in line with discounted rookie expectations, and Jackson’s forecast rose significantly in the last few games of 2018.

Their second seasons went very differently for Mayfield and Jackson. The former’s passing grades lagged his rookie season, with each week providing more evidence that he shouldn’t be forecast as an elite passer. Jackson, on the other hand, rocketed up to start the season, fell off some, then took to flight again midseason. Despite a significantly lower draft-position prior and modest rookie season, Jackson now roughly equals Mayfield for our best guess forecast.

We can apply the same Bayesian forecasting technique to the play-by-play results on the field. I prefer to use expected points added because it accounts for situational context — like down, distance and field position — for a more accurate assessment of value added in the thing that truly wins games: points scored.

Below is the progression of Bayesian EPA forecasts for the 2018 class updated for each dropback. 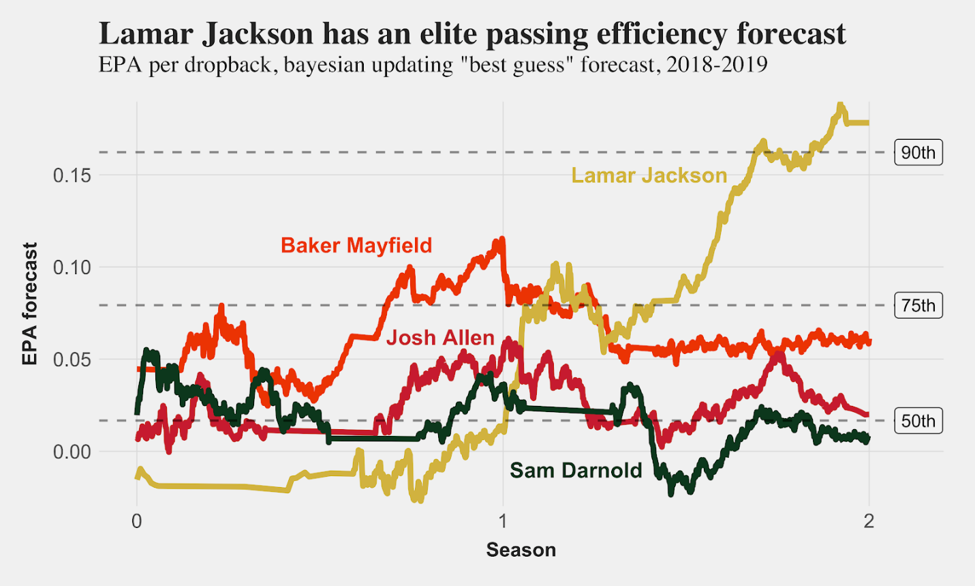 Again, Mayfield looked the part as a rookie, rising quickly above the 75th percentile for historical quarterback efficiency, before falling in his second year. The difference with the EPA forecast versus passing game is that Mayfield’s on-field efficiency numbers never matched our grades, leaving him with a lower relative EPA forecast. Much like with the passing grade forecast, Allen and Darnold fluctuated around their initial forecasts and ended their second seasons right around a median quarterback. Considering the number of quarterbacks who come and go every season, being average is not what you want from the future of the franchise.

Jackson is the clear standout by EPA forecast at the end of second season. What’s remarkable about Jackson’s forecast is that this doesn’t include value that he’s added on designed runs. Question of Jackson’s ability to sustain efficiency should be quieted some by this analysis, an objective formula that accounts only for plays when Jackson drops back to pass.

Putting the passing grade and EPA forecast for the 2018 class next to previous quarterbacks through two seasons (min. 650 dropbacks) gives perspective that should excite Ravens and Browns fans, while scaring those of the Bills and Jets. 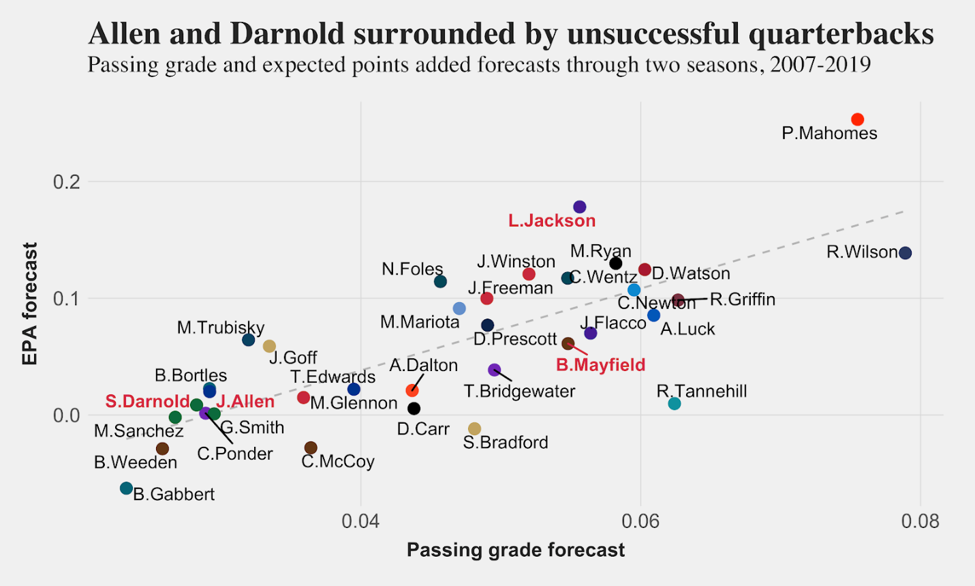 Ignoring the otherworldly numbers for Patrick Mahomes, Jackson has the strongest EPA forecast following two seasons for any quarterback drafted since 2007. Jackson is also in good company for passing grade forecasts, along with Mayfield.

While signs are tentatively positive for Jackson and Mayfield, warning signals are flashing red for Darnold and Allen. The former Nos. 3 and 7 picks are sandwiched in a cohort with Geno Smith, Mark Sanchez, Christian Ponder, and Blake Bortles. It’s possible that quarterbacks with only a couple seasons in the NFL can still break out, but it hasn’t happened recently.

Bayesian updating provides not only a “best guess” forecast, but also a full range of outcomes and corresponding probabilities. Since there is more variance in 2018 class’ projections for passing grade, I’m going to only walk through the ranges for grade below. 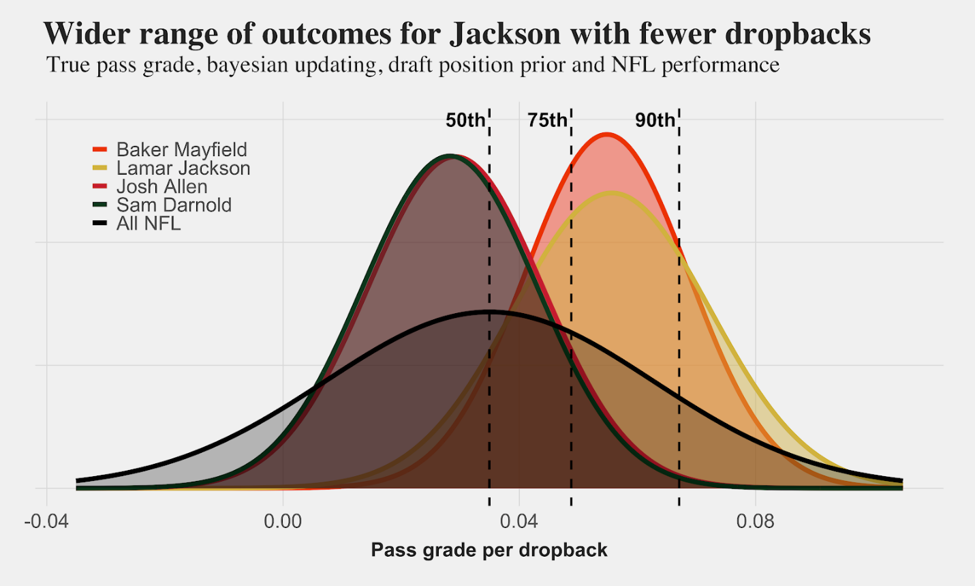 Jackson’s and Mayfield’s range of outcomes for passing grade are separated to the higher side from the overlapping ranges for Allen and Darnold. Minimal sections of Allen’s and Darnold’s distributions fall above the 90th percentile for NFL passers, indicating vanishing upside. Jackson’s distribution is not as tall and wider than the others, as his lower dropback count means we know less about him.

How likely are they elite?

With these distributions we can simulate an outcome for each, and repeating that process a great number of times can provide more exact numbers for the probability quarterbacks meet certain career thresholds.

I went through the process of randomly generating an outcome from the distribution for each quarterback 1 million times, then calculated how often they were above certain thresholds. 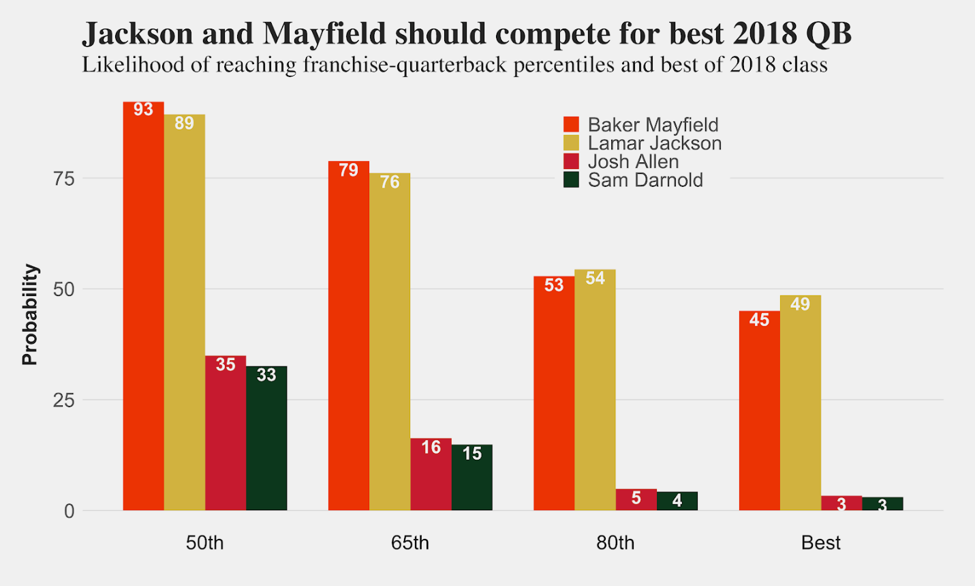 The categories indicate if the quarterback is at least in the 50th percentile of franchise quarterbacks, 65th percentile, 80th percentile and the best (highest forecast) of the four quarterbacks in the class. Mayfield and Jackson are near equals in best guess passing grade forecasts, and that’s reflected in the numbers.

Counterintuitively, we concurrently have a higher likelihood that Mayfield will at least be average and a lower likelihood he’ll be above the 80th percentile. We have a bigger sample of Mayfield throws, and more evidence means more confidence that the current estimate is correct, while more extreme outcomes are less likely.

It will seem hard to believe for many, but the numbers show great confidence that neither Allen nor Darnold will become the best passer, by PFF passing grade, of the class. That said, unlikely outcomes still happen, and there’s still a greater than a 1/20 chance that either will eventually be considered the best selection.