This article is part of a series that goes through our top-ranked free agents (excluding quarterbacks) by position group, using their past stats to match them with historical players.

We started with one of the strongest free agent wide receiver classes ever, and this article turns to free-agent offensive tackles. Once we have a sample of similar players, we can see how those similar players performed in subsequent seasons to get an idea of the current player’s range of outcomes. I’ll also include any potential bargain free agents who aren’t at the top of our rankings but look better than expected in WAR projections.

Buying wins in free agency is an expensive proposition, but the value of each incremental win for a playoff-caliber team cannot be understated. This year, teams will have tough decisions about how to spend that money.

For each of the offensive tackles below, the closest comparable players were found by measuring the similarity between them based on several features — age (within one year), weight, WAR, previous-year WAR, WAR per snap and PFF run-blocking and pass-blocking grades.

The most similar players across these metrics are grouped to calculate the expected WAR numbers for 2020 and 2021, with the weight of each comp reflecting the level of similarity. I didn’t use the same number of comps for all players, as it is more difficult to find a wide range of comparable seasons for older players.

Williams is a difficult player to comp, as he presents a unique combination of age and performance. The veteran tackle turns 33 years old this coming season and just posted the second-best grade of his 11-year career. Williams’ comps include some great players, though none played as well in the age-equivalent season, according to PFF WAR. If Williams can avoid a swift decline, there is a lot of hope for continued strong play judging by the late-career outcomes for Jason Peters, Andrew Whitworth and Duane Brown. 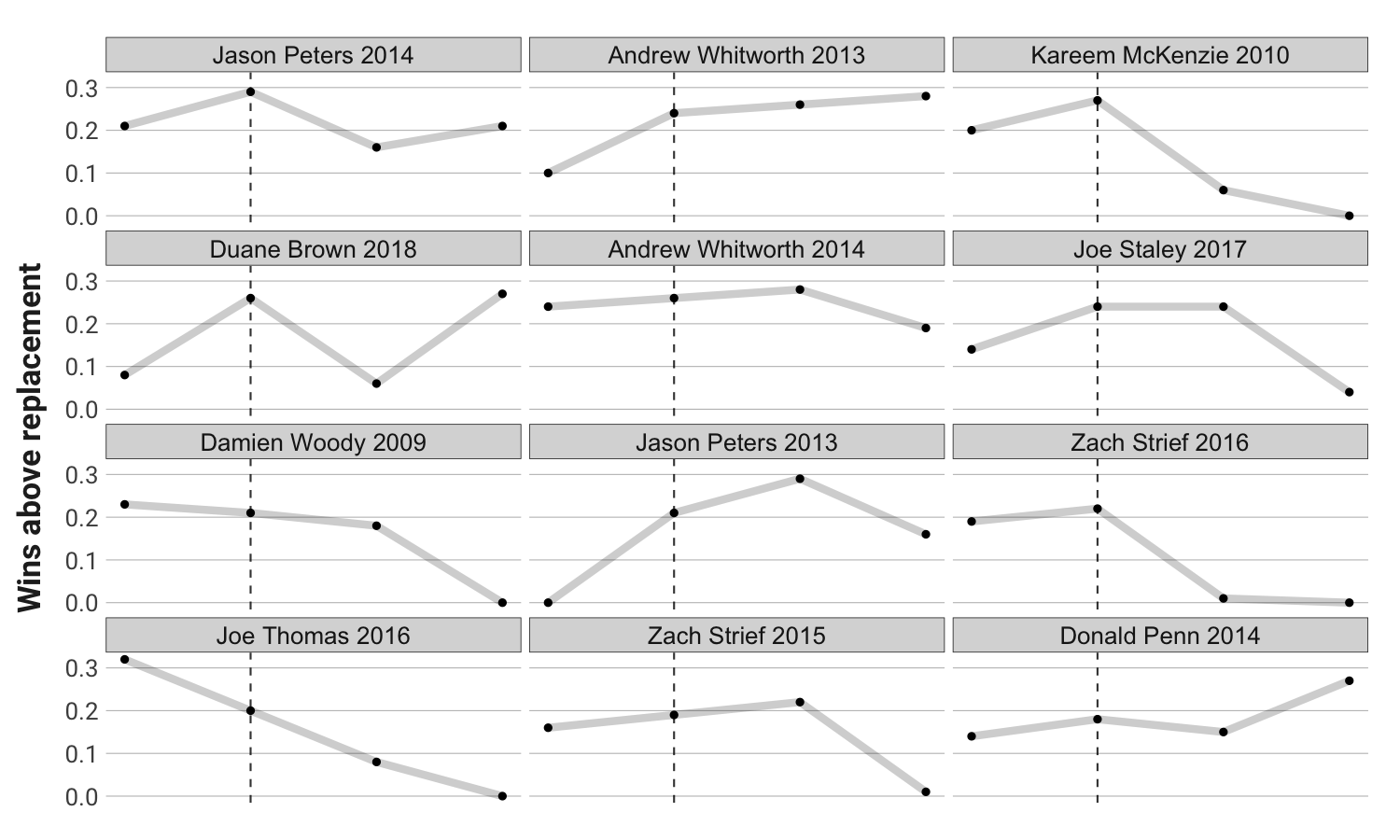 The ceiling and expected WAR values drop in our projections, mostly because Williams’ 2020 baseline is so high. He generated 0.4 WAR last season, the best figure for a tackle since PFF started grading in 2006. The context is that many tackles had top WAR numbers in 2020, perhaps because of fewer holding calls. 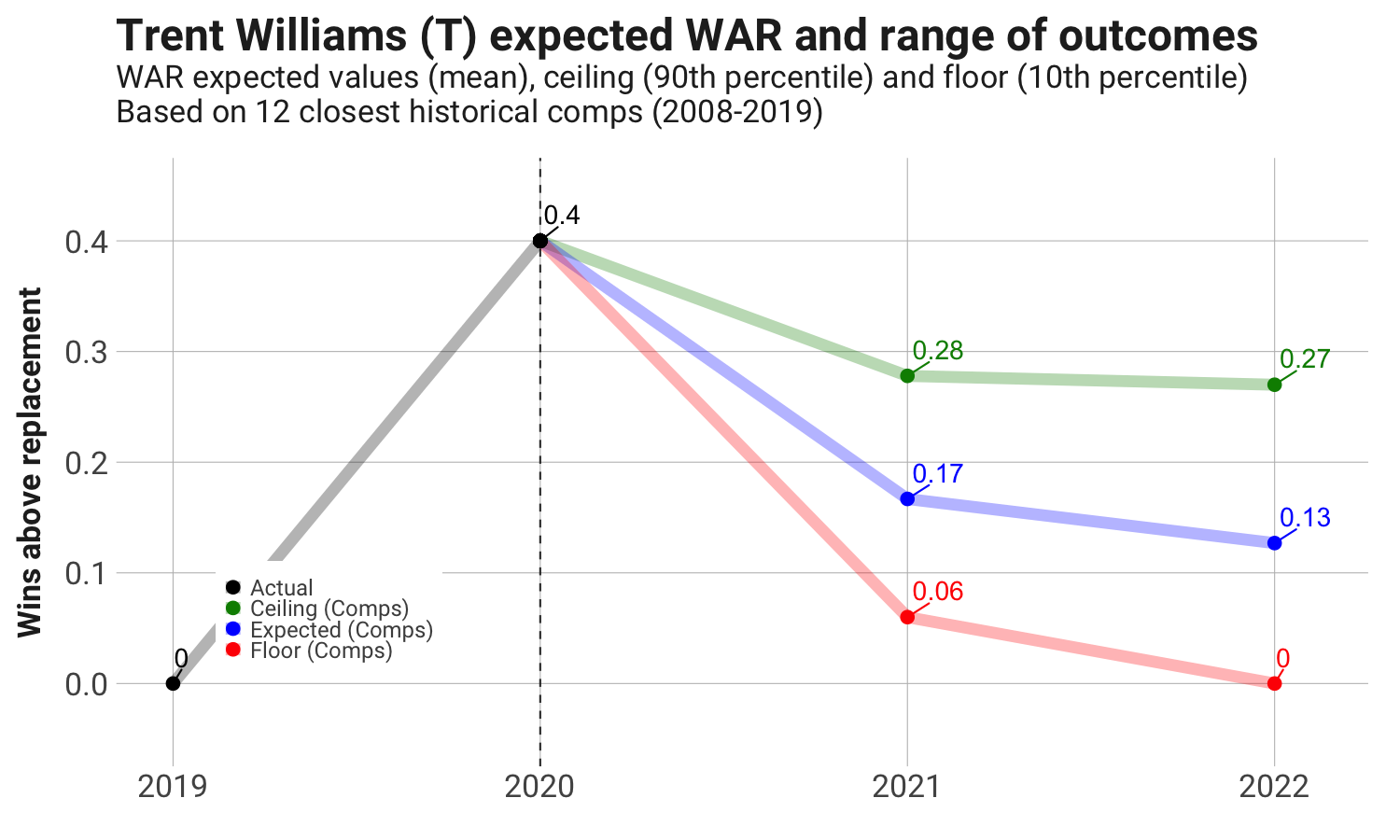 Some of the value numbers here are seemingly astronomical, driven by how much of an outlier 2020 was in terms of tackle performance. The upside for Williams going forward, even in his mid-thirties, is enormous. We expect him to sign a longer deal at around $20 million per season, which falls between our expected and ceiling projections.

Moton has been one of the most consistently productive tackles in the NFL, ranking in the top 12 in WAR over the last three seasons. Moton’s comps include some of the best at the position, such as players like Green Bay‘s David Bakhtiari. However, the comps also include some disappointments, which drag down the projections below. 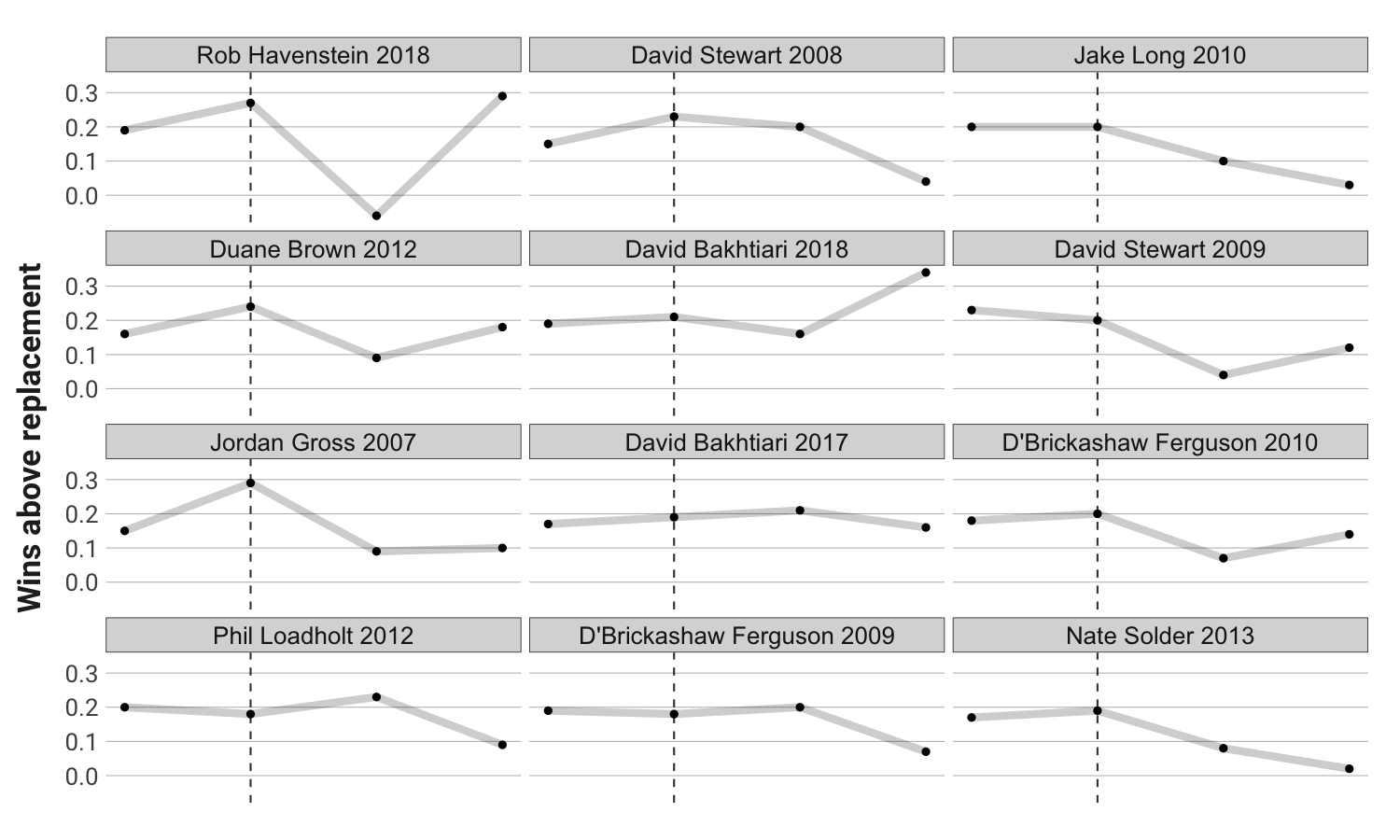 Moton’s 2020 play is seen as close to his ceiling going forward, as it would be unprecedented for tackles to keep up that level of WAR for a sustained period. Moton has a higher floor than most at the position, and at 26 years old, he should be able to sign a long-term deal. 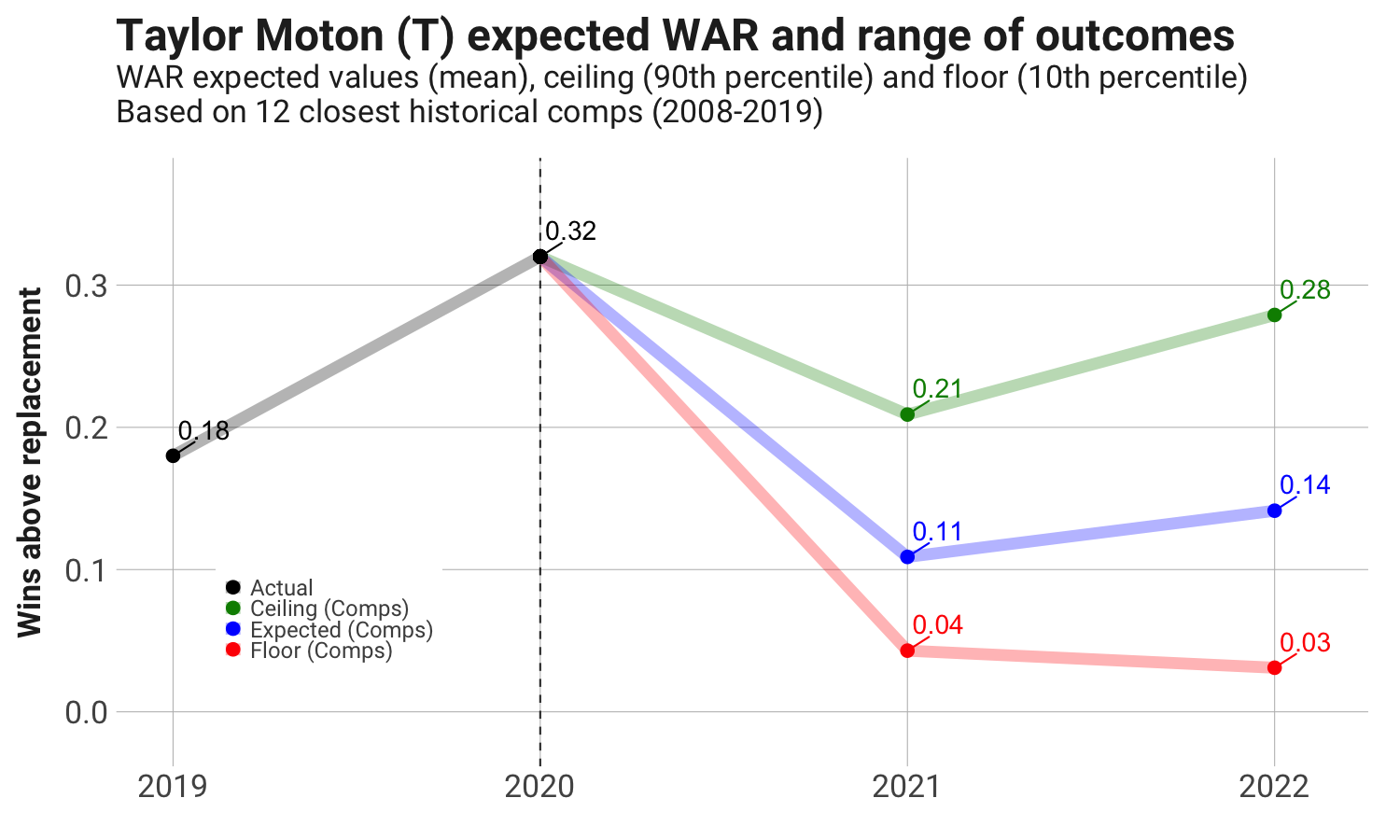 We see Moton signing for around $16 million per season, making him a compelling player with the upside to outperform that number.

Missed time due to injury has held down Okung’s production over the last two seasons, but he was a top-20 tackle for most of his career before that. Unfortunately, most of the comps for Okung, who similarly struggled going into the projection window, failed to turn things around. 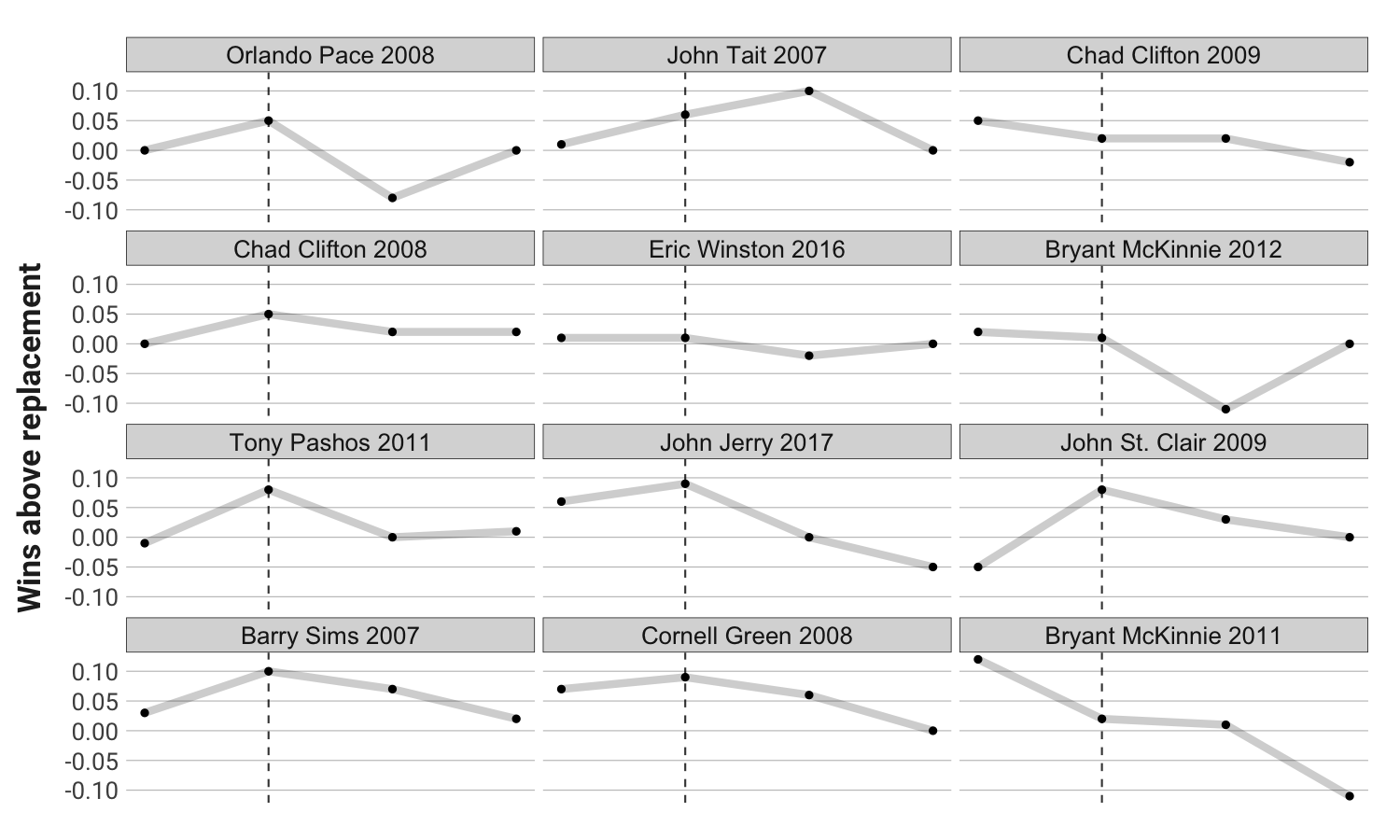 The baseline projection for Okung is roughly replacement level, which seems harsh for a once-dominant player. It’s fair to bump up those numbers knowing the upside that Okung has shown in the past. 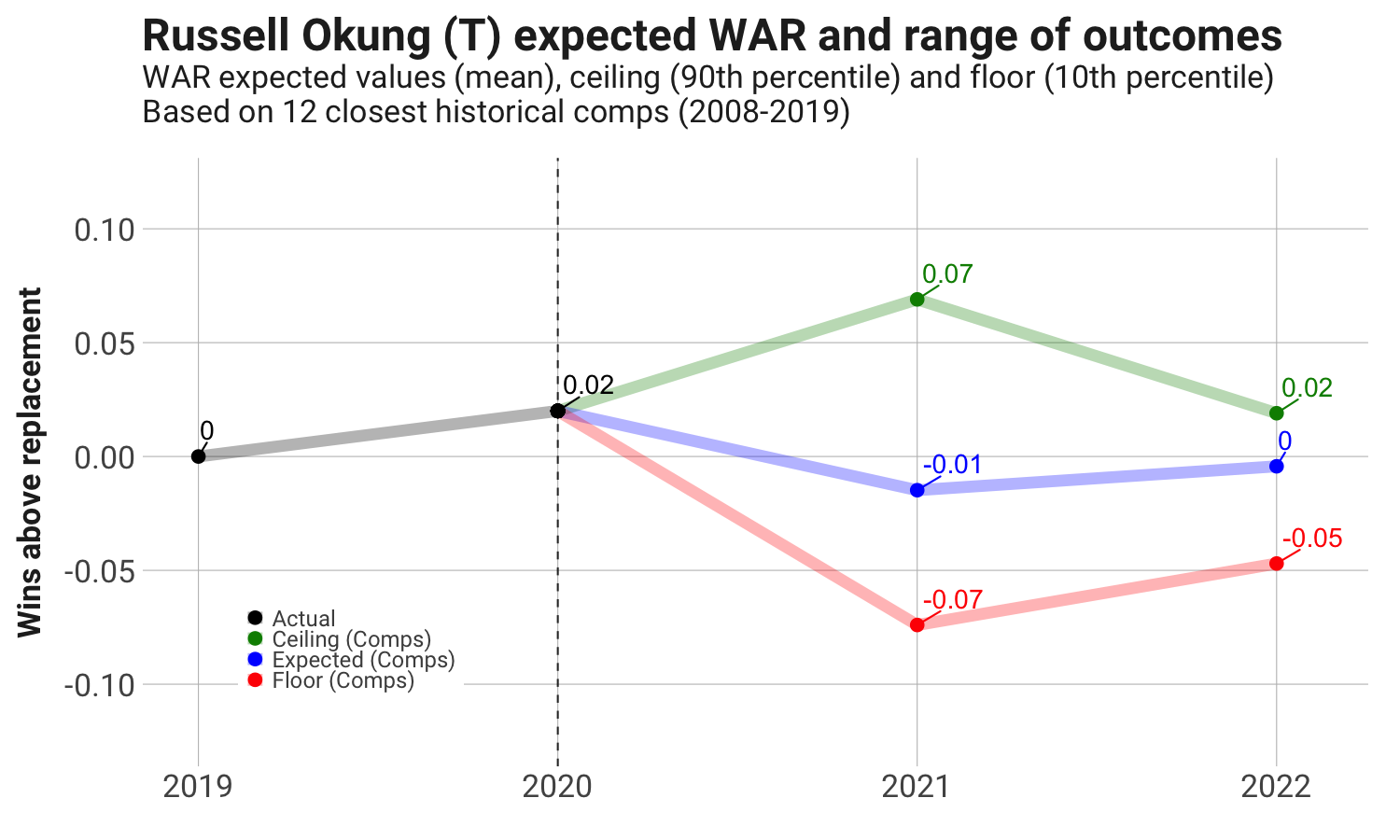 We see Okung signing a larger contract worth around $17 million per season, which looks like a significant overpay relative to his projected WAR numbers.

Villanueva's performance dropped in 2020 from what was a reasonably consistent, higher baseline the prior several years. At 32 years old, Villanueva is hitting the age when a decline signals the end more often than it signals a rebound. 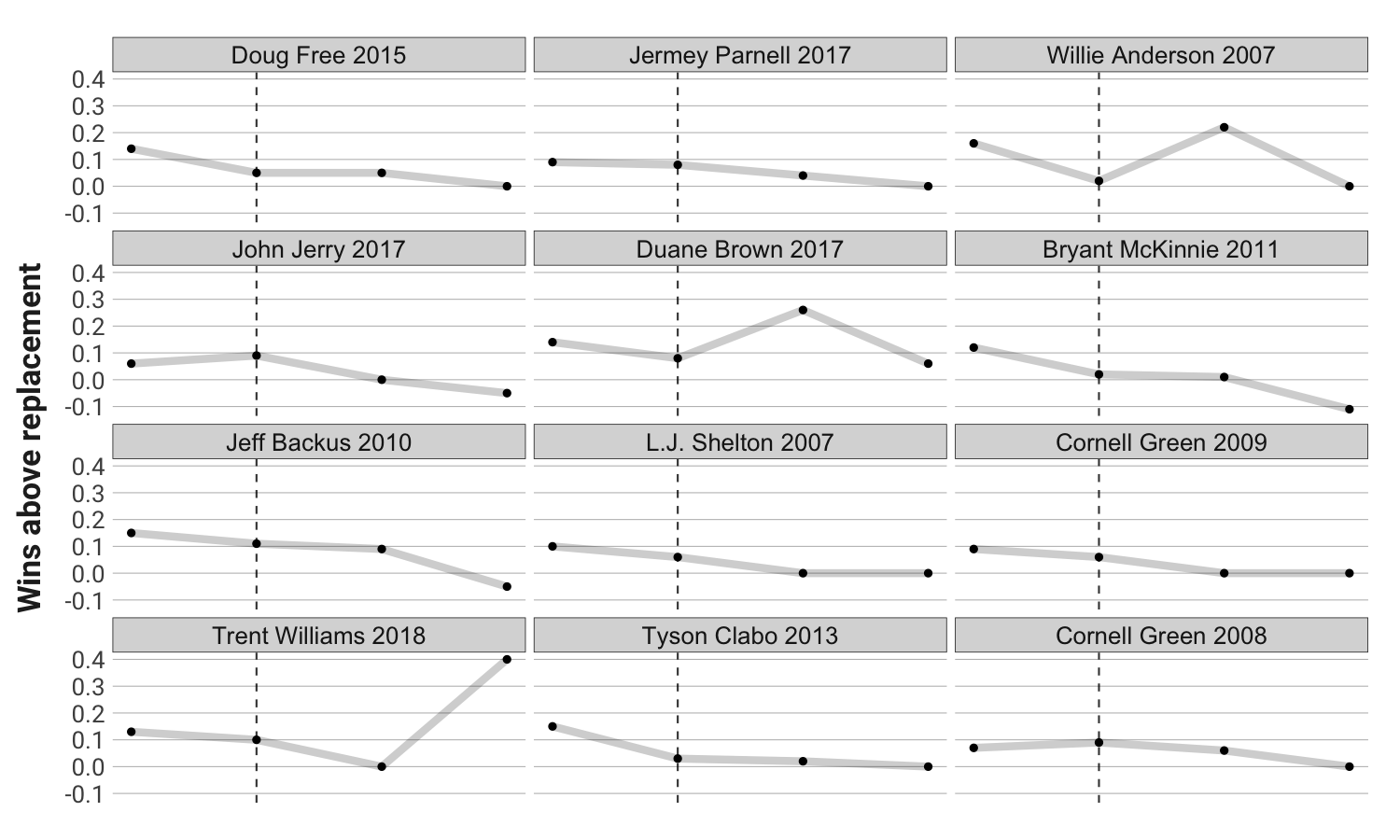 Our expectation for Villanueva is that his WAR numbers continue to fall in the coming season, though only slightly. However, there is an upside based on a couple of comps who had significant jumps in production in their mid-thirties. 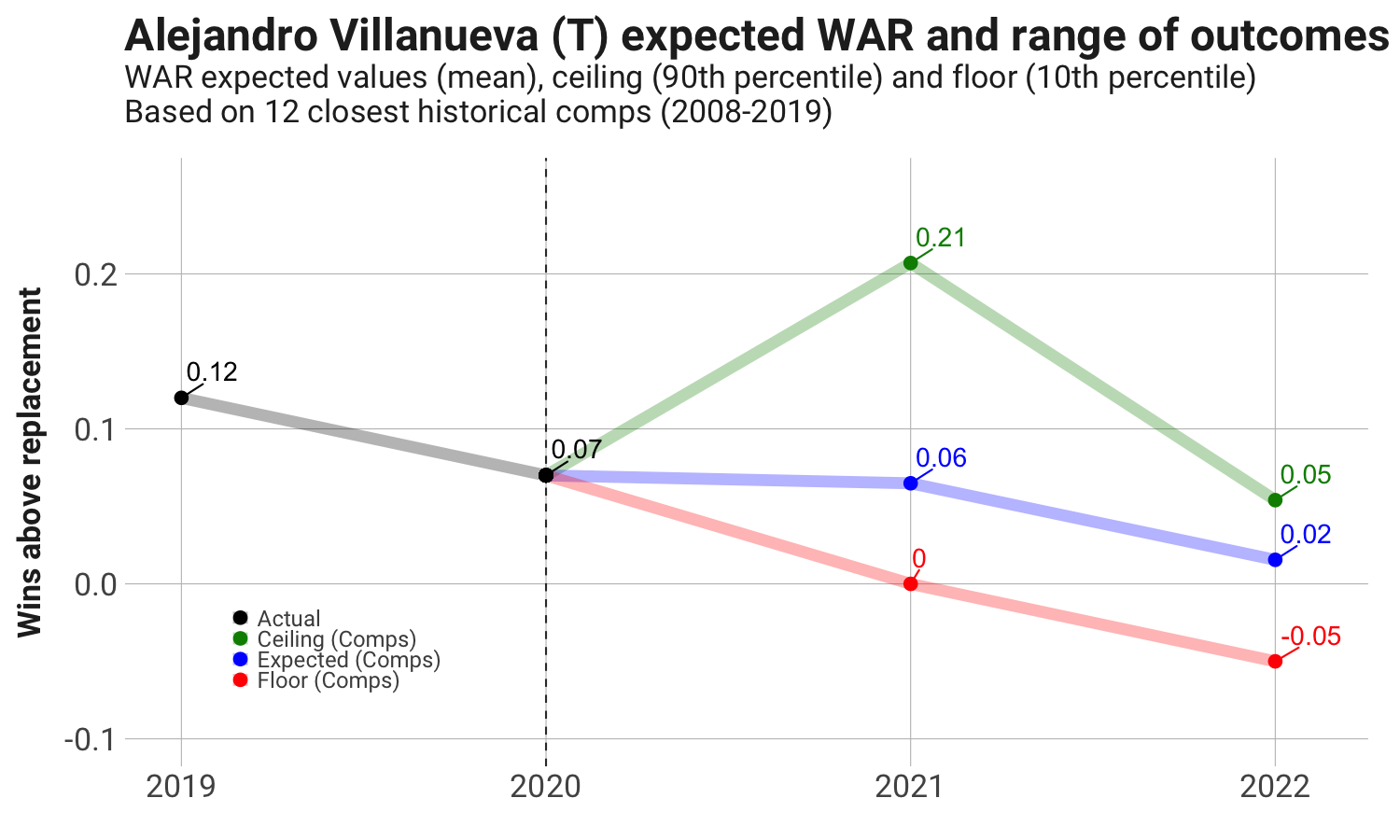 We forecast Villanueva will earn a contract of around $15 million per season, and that looks rich compared to our projections.

Williams broke out in his third season with the Carolina Panthers back in 2017, then had a long lull until coming to the Buffalo Bills last year coincided with a jump back to elite status. The question is if teams should buy into the bounce, and Williams’ comps are about equally split between maintained production and a fall to near replacement level. 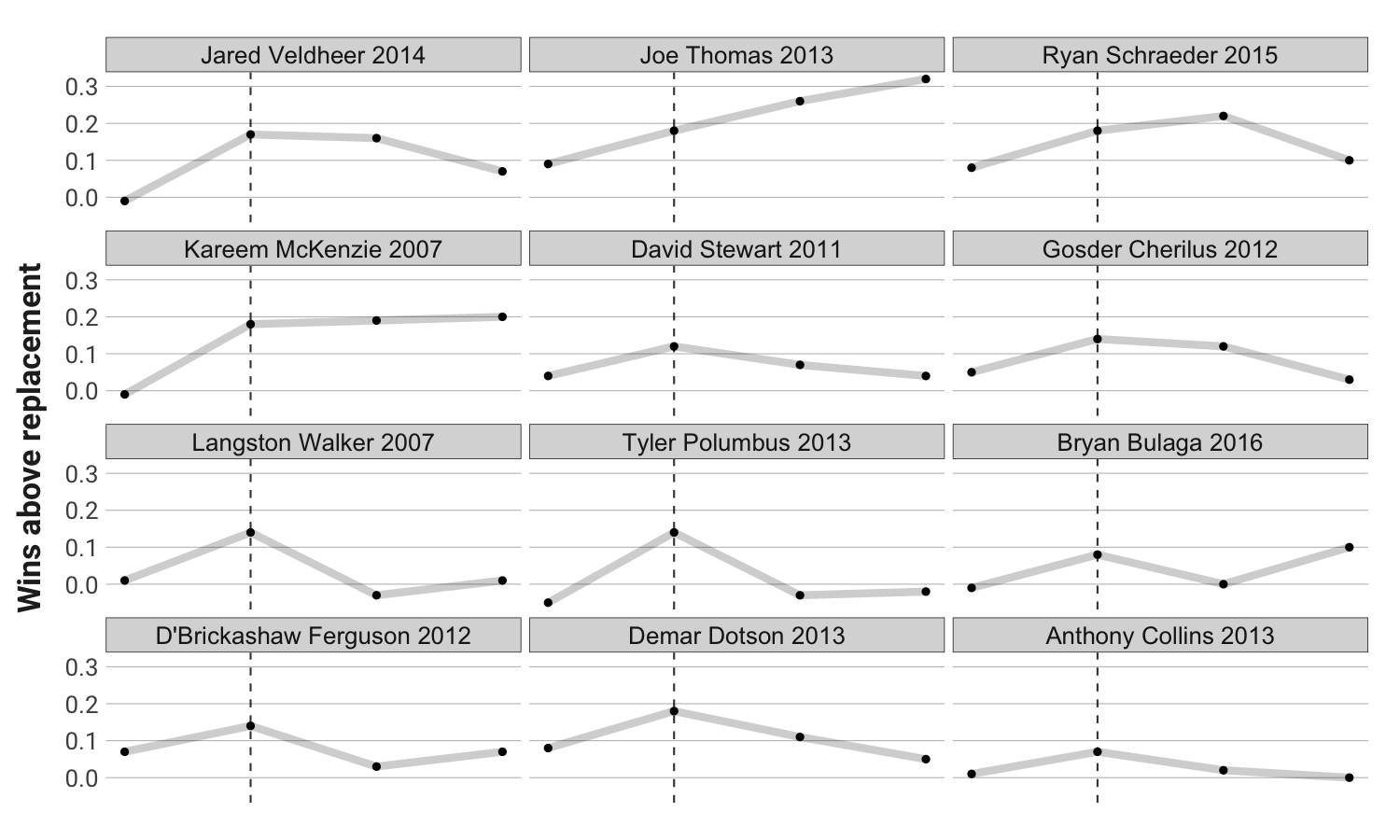 Out expected WAR for Williams is lower than what he produced in 2020 though higher than in many preceding years. Williams maintains a ceiling around the level he played at in 2020, which could attract teams to buy his turnaround. 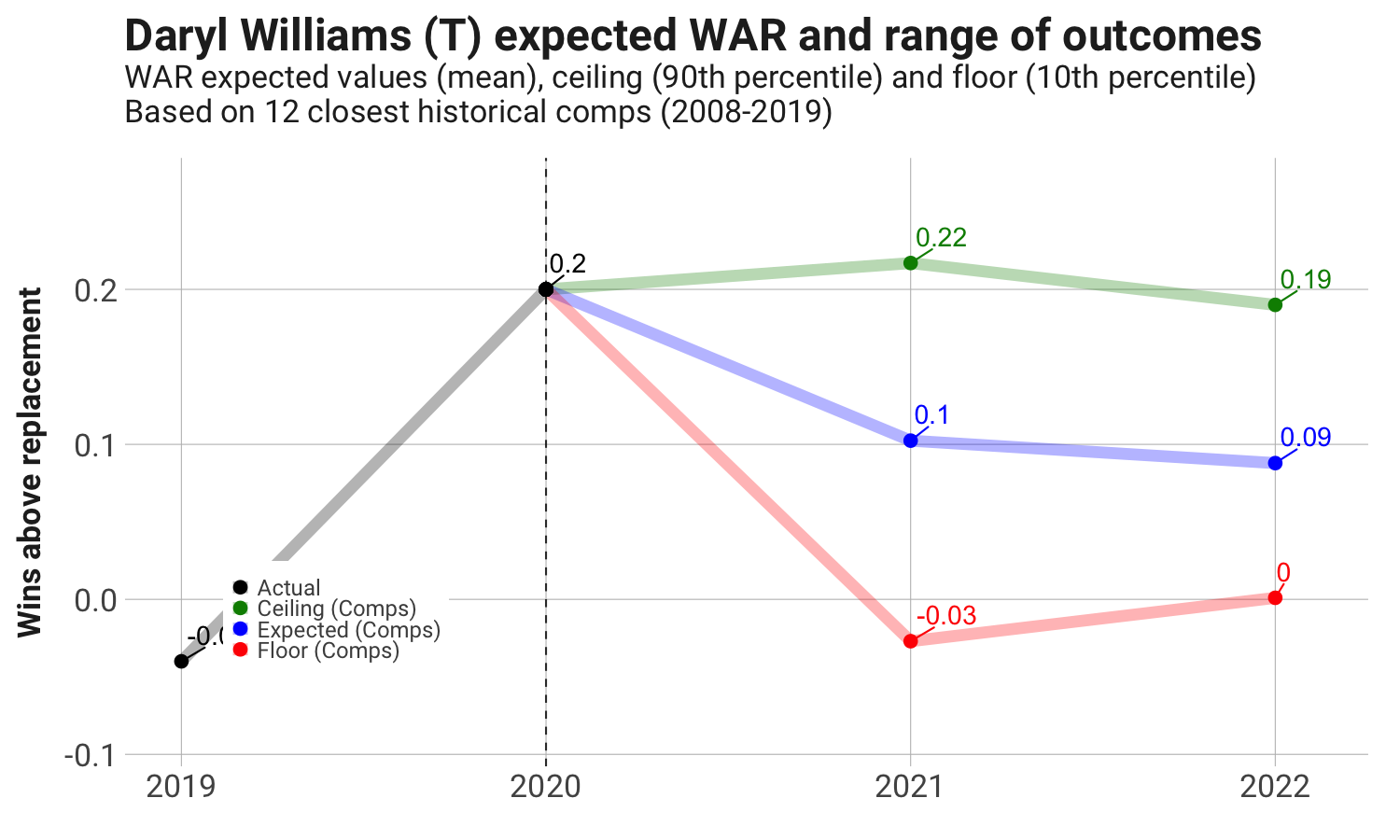 We see the market showing a great deal more skepticism on Williams than our projections, seeing a contract in the range of $10 million per season, roughly in line with his expected production.