With only two teams remaining to compete in the Super Bowl, the offseason is in full swing for the rest of the NFL and football pundits. We at PFF are also getting into the action with the launch of our 2021 Draft Guide and Free Agency Rankings tool, which allows you to sort by position and team needs and includes contract projections from OverTheCap as well as historical grades and wins above replacement (WAR) numbers for the past three seasons.

This article is part of a series going through our top-40 ranked free agents (excluding QBs) by position group, using their past stats to match them with historical players. Once we have a sample of similar players, we can see how those similar players performed in subsequent seasons to get an idea of the current player’s range of outcomes.

I’ll also include any potential bargain free agents who aren’t in our top-40 rankings but look better than expected in WAR projections. Wide receivers dominate our free agency rankings, accounting for the second-, third- and fourth-highest-ranked players below quarterback Dak Prescott.

In this article, we’re starting the free agent forecasts with the wide receiver position. What will become apparent from the value numbers below is that our WAR numbers probably see the position as more impactful than some NFL decision-makers. However, the numbers will also show that the position generally has a lower floor when players don’t meet expectations.

For each of the receivers below, the closest comparable players were found by measuring the similarity between them based on several features — age (within one year), weight, WAR, previous-year WAR, targets per game, average depth of target, PFF route grades and WAR per snap.

The first plot shows the relevant WAR numbers for each of the receiver’s closest comps. The next displays past and future performance for the free agent based on the comps. And the final table shows the dollar values based on positional WAR baselines for each outcome (expected, ceiling and floor) through 2022.

I decided to restrict the forecasts to the next two years in order to maximize the number of comparable players we have in the dataset, reduce error for longer forecasts and reflect the fact that all but the top-tier free agent contracts in the NFL are glorified two-year deals that give teams the option to continue.

Godwin’s production fell somewhat in 2020, though from a particular high base. Godwin’s 0.83 WAR was the highest of any wide receiver in 2019 in a down year for top-tier receivers (ranked 19th among all receiver seasons since 2006).

Godwin’s most comparable players include some of the top receivers of the past 15 years, including Julio Jones, Demaryius Thomas and Brandon Marshall. The 2021 season will be Godwin’s age 25 season, on the younger side for players entering free agency. The fact that Godwin took a step back this season brings some ultimately unsuccessful comps into the mix, like Hakeem Nicks. 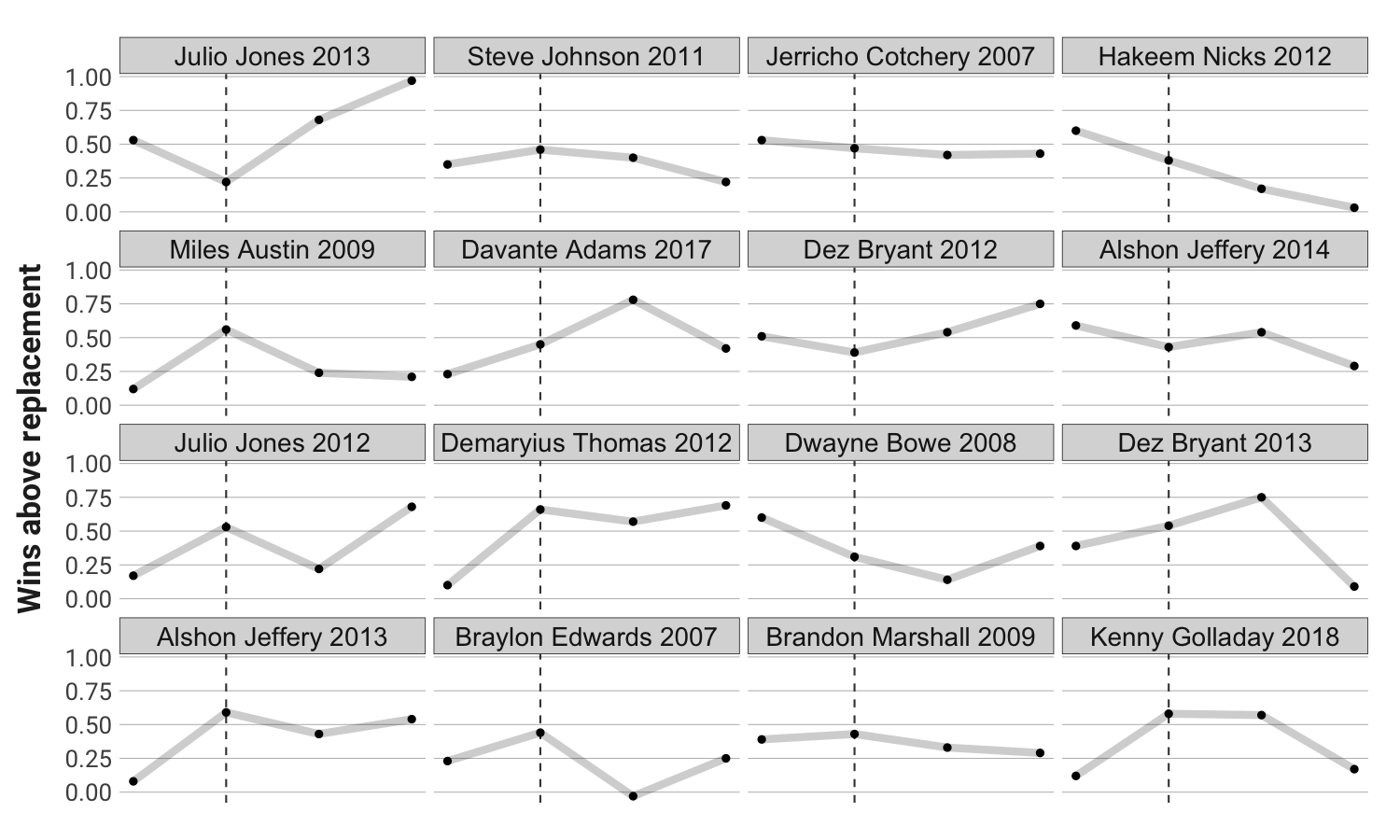 Bringing together the WAR projections for the 16 comps and weighing them by similarity, we see that Godwin’s expected WAR over the next two seasons is higher than his subdued 2020 but doesn't approach 2019 levels. In fact, his ceiling outcome doesn’t reach previous heights, though it would be tremendously valuable to any franchise. The floor outcome for Godwin, like most players in the NFL, is fairly low, but not completely negligible as it is for many players. 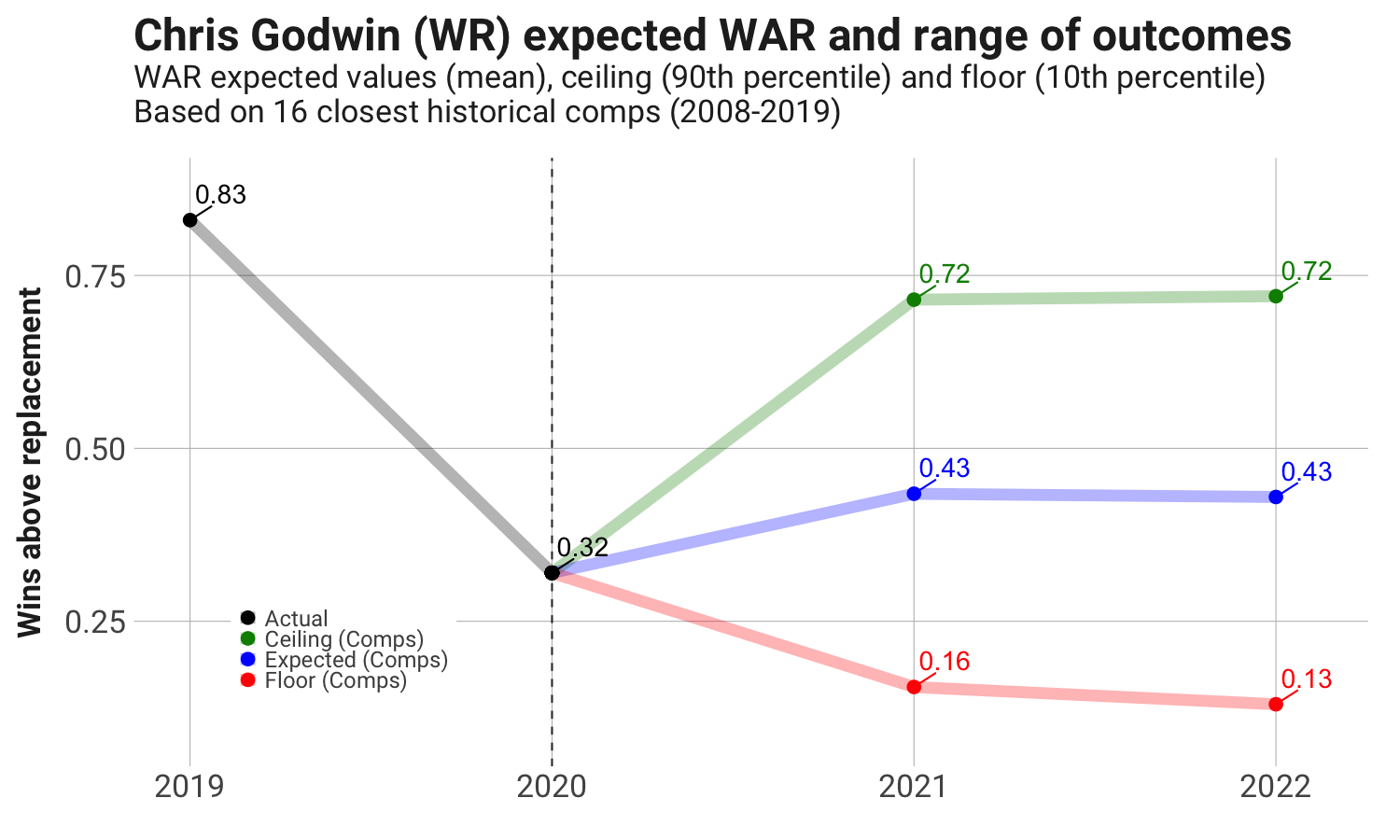 The caveat with Godwin and all potential free agents at this point in the offseason is whether he’ll have the opportunity to hit the market at all. The Tampa Bay Buccaneers could franchise their star wideout, though reports indicate that the team wants Antonio Brown, another free agent, back in 2021, potentially leaving the more expensive Godwin to find another home.

Godwin’s projected value, based on historical WAR values for previous free agent wide receivers, is a little over $18 million per season for the next two year in the expected outcome, and over $30 million per year for the ceiling outcome. We project Godwin to receive a contract worth around $22 million per season, including $65 million guaranteed. That means he’d have to hit closer to his ceiling to provide value going forward, which based on his past performance is attainable.

Robinson slots into our top free agents slightly below Godwin and is another example of the type of receiver who usually doesn’t hit free agency. Robinson’s closest comps are littered with former and current prototype WR1s, including the most similar comp, Andre Johnson. 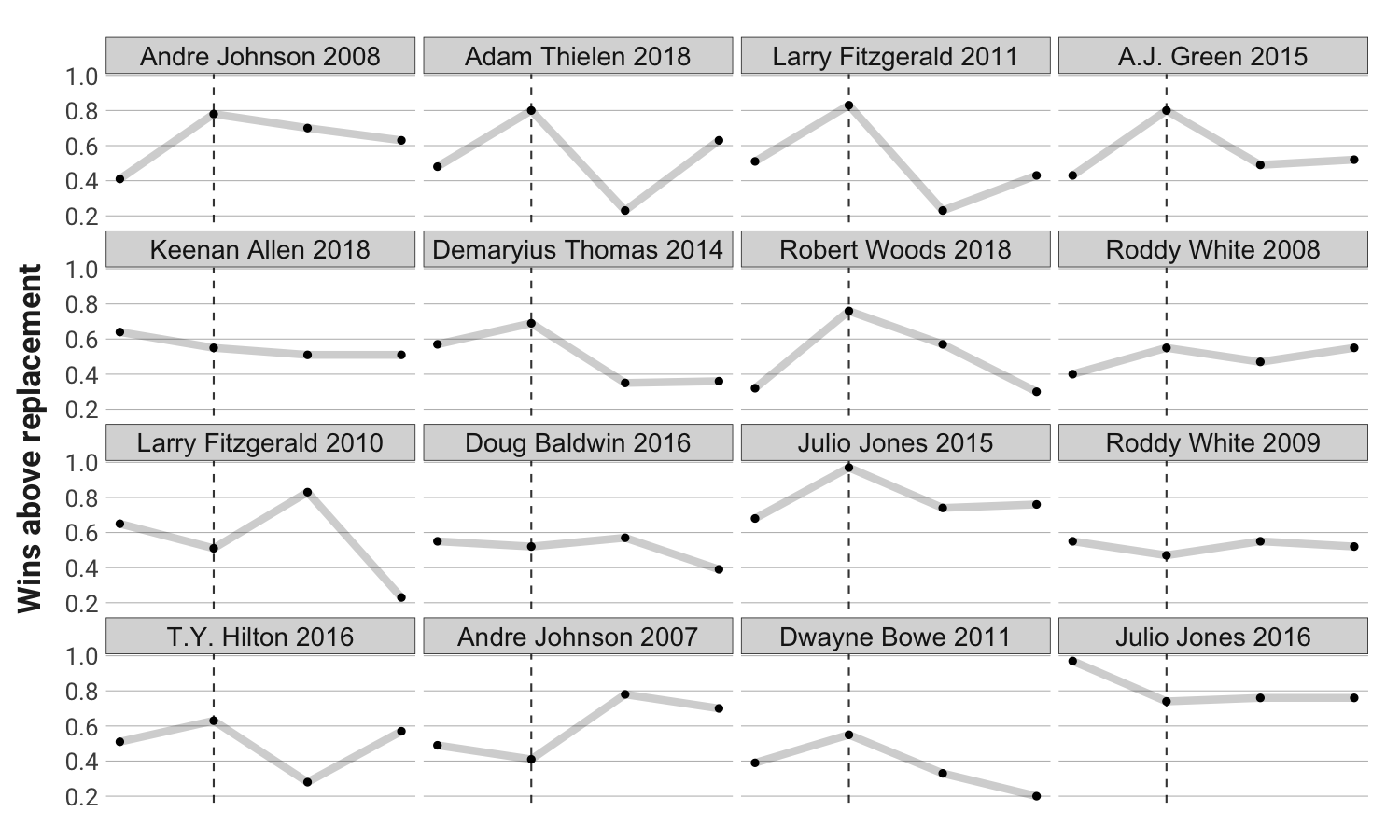 Robinson has the reverse of Godwin with his better season coming in the most recent year, and it causes his projections to be slightly higher, despite being a few years older entering his age-28 season. Robinson’s ceiling and expected WAR outcomes are slightly higher, and he provides a materially higher floor. In Robinson’s full six seasons in the league, he’s had a top-10 WAR among wide receivers three times. 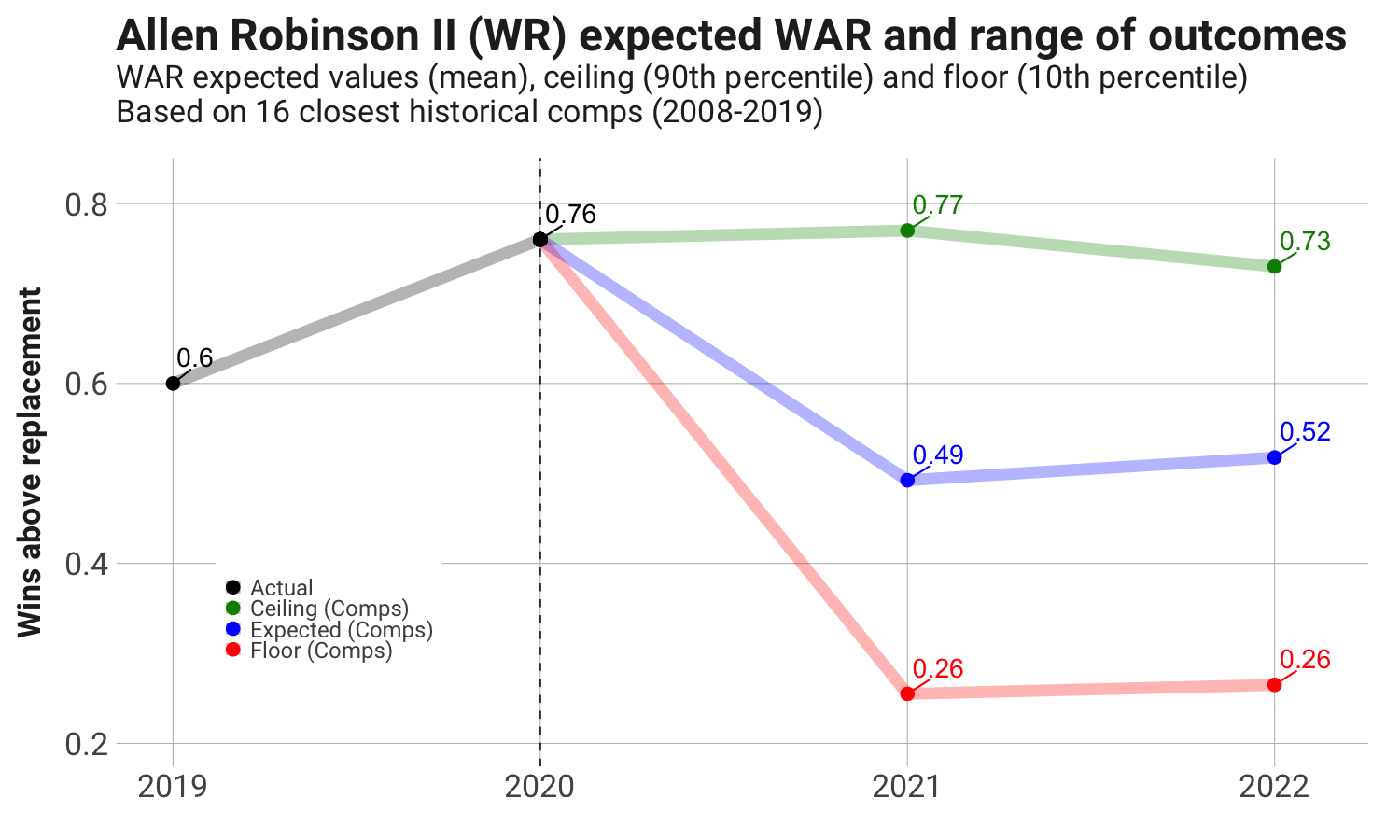 With incrementally higher WAR projections than Godwin, Robinson also has incrementally higher value from a market perspective. Even with the expected regression in coming years, his expected value over the next two seasons is over $21 million per year, roughly in line with our contract projection of $21 million per season. That means there’s lots of potential upside for teams signing Robinson, with a decent floor in place.

Robinson has functioned at the clear lead wide receiver for his respective teams throughout his career, an important consideration adding certainty to his projection in that role going forward.

Golladay rounds out the top-tier of wide receivers eligible for free agency in 2021, though his comps shouldn’t be mistaken as on the same level as Godwin’s and Robinson’s. Some of the bigger-bodied receivers on this list broke out after what would have been the age-equivalent season for Golladay in 2020 (dashed), including Jordy Nelson and Dwayne Bowe. Others fell, though names like Rishard Matthews and Justin Gage in their age were never considered equal talents to Golladay in his age-27 season. That age is important, nearly equivalent to Robinson despite having been in the NFL for three fewer years. 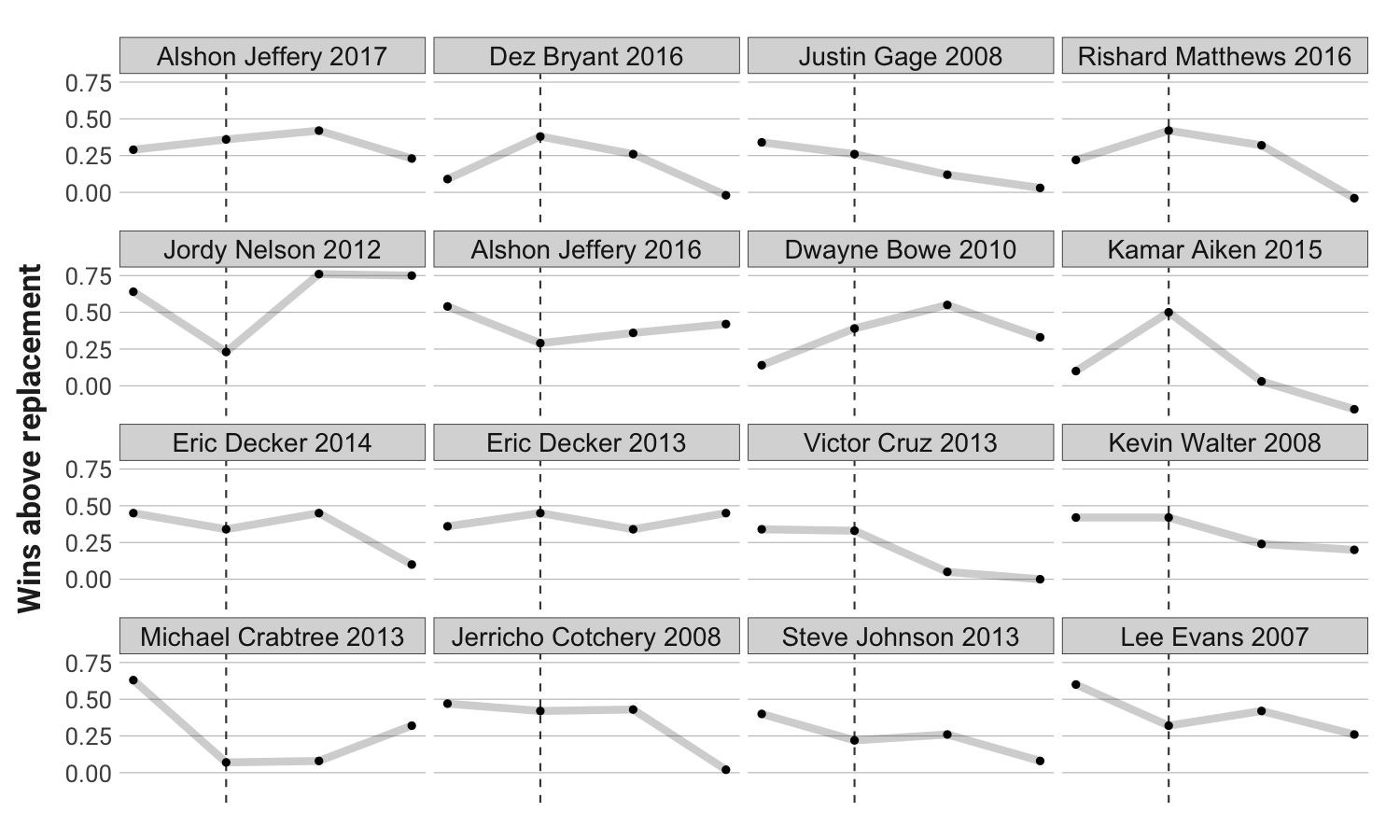 Golladay’s WAR numbers fell significantly in 2020, though mostly based on a lack of availability. His WAR per snap number was actually higher than any season of his career, but he only was available for 225 snaps versus 900-plus in the previous two seasons. If you believe that the injury concerns are a blip, then it’s fair to view the projections with the assumption that they’re on the lower side of his most reasonable projected outcomes. 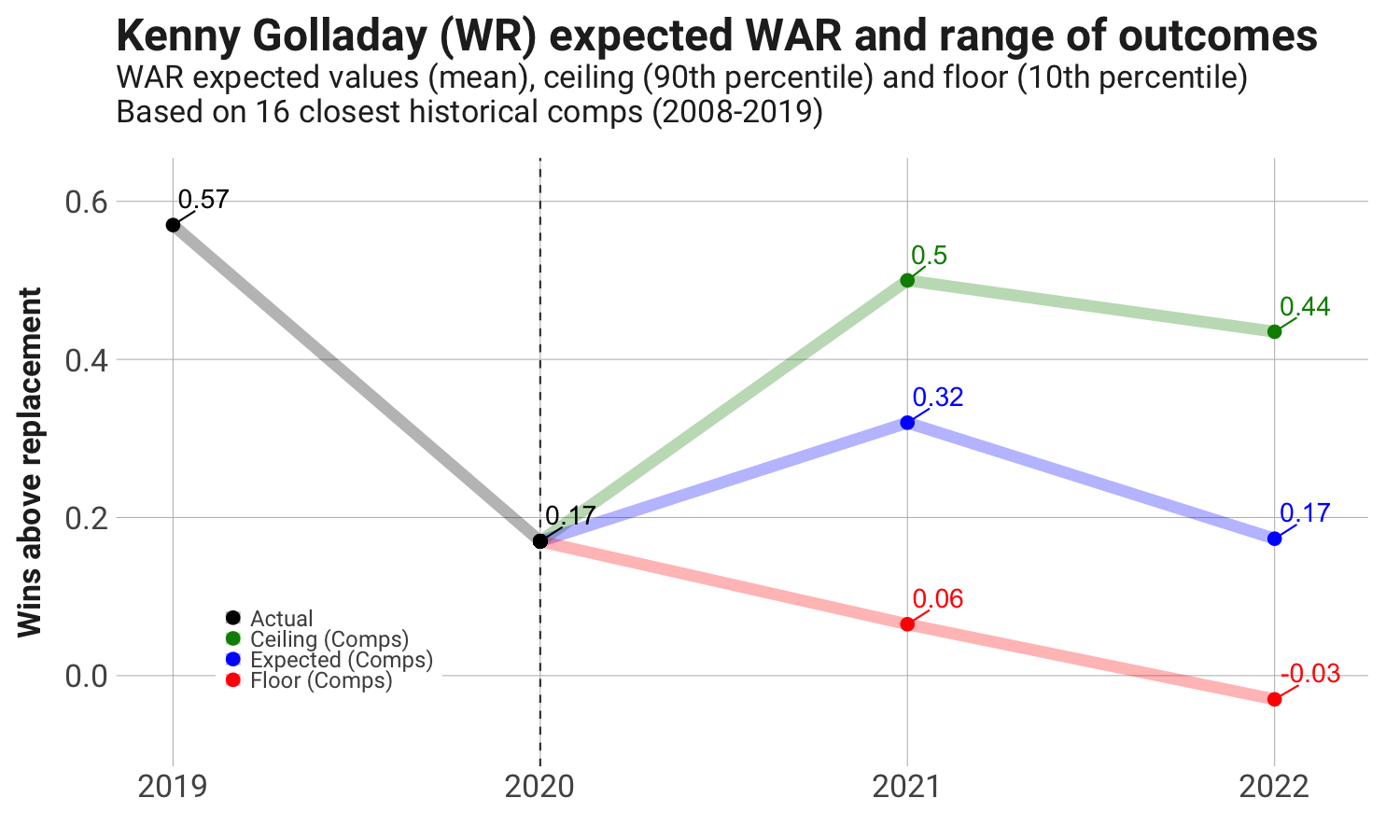 Golladay’s projected values look weak in comparison to our expectation of a $21 million per year contract, though health is likely the biggest risk. The numbers point to Godwin and Robinson as much better values with expectations of similar contracts going forward.

Fuller isn’t in the same tier as the top-three above, but as the 11th-ranked free agent he’ll still be a coveted player. The dynamic Fuller compares well with other speedsters like Doug Baldwin, DeSean Jackson and T.Y. Hilton. 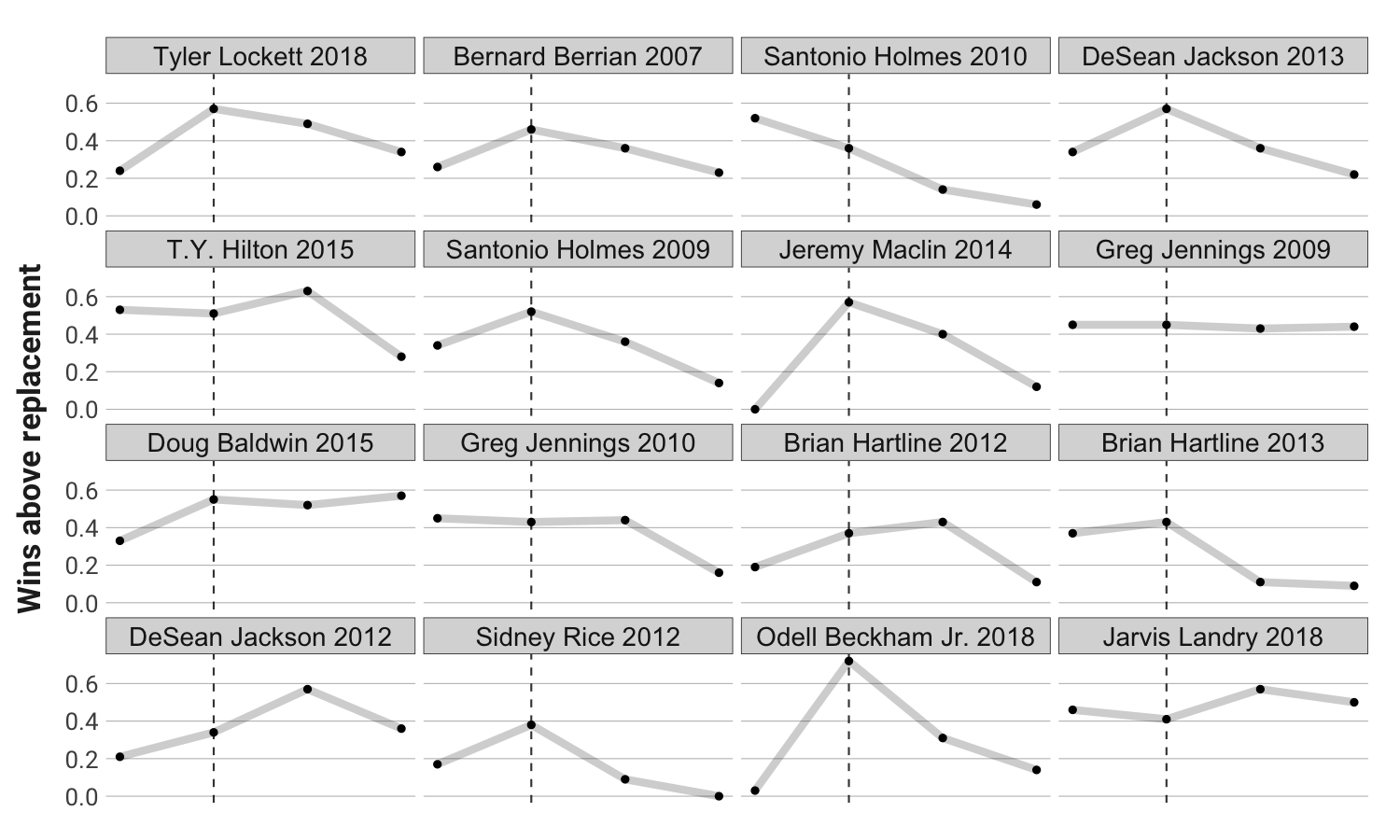 Unfortunately for Fuller’s projections, his comps saw a significant fall in WAR output two years down the road, and that could be the case for Fuller after facing a six-game suspension next season and having never played a full season over his four NFL seasons. Fuller simply hasn’t shown the ceiling of the higher-ranked wide receivers. 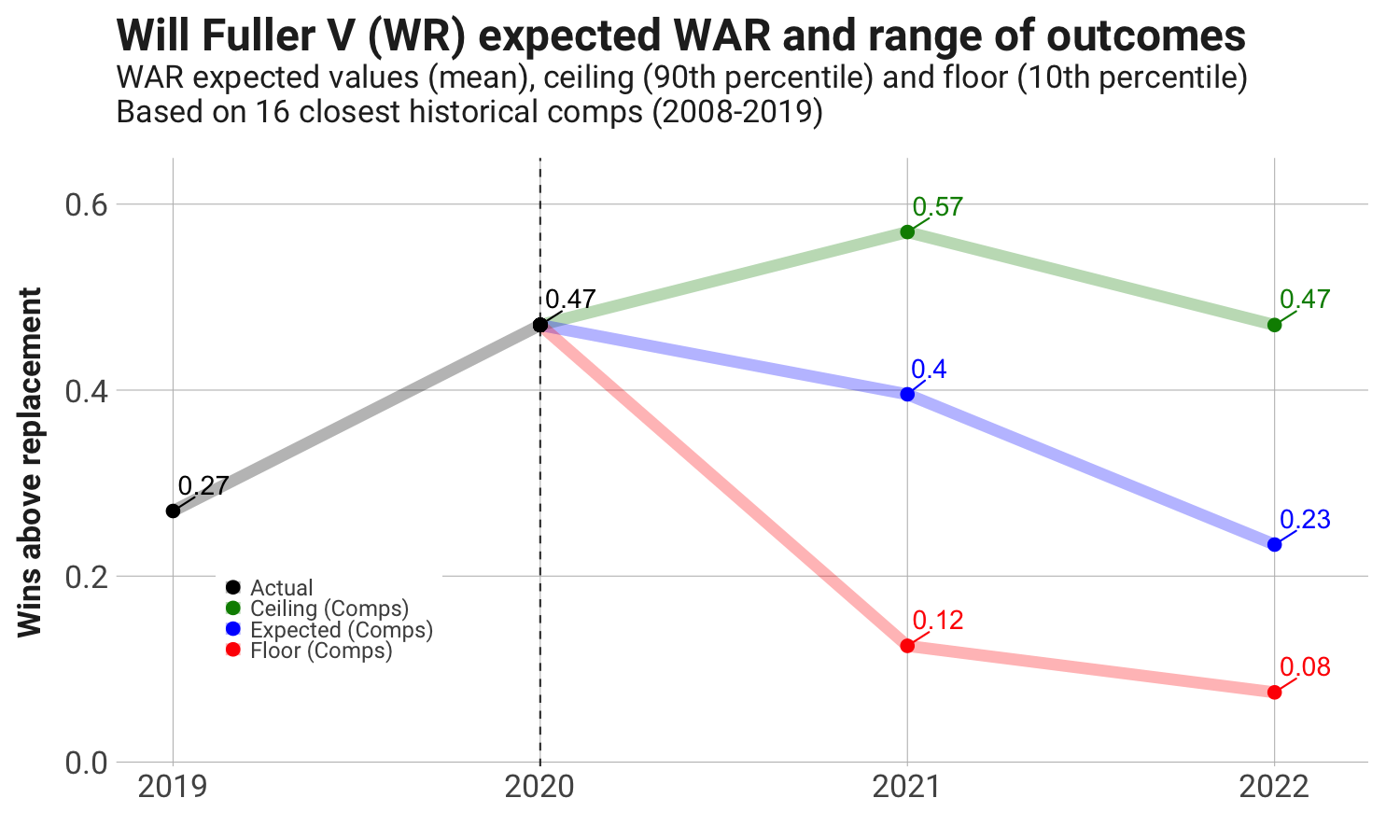 Fuller’s ceiling outcome would make him a value at our projected contract amount of $17.5 million per year. With suspension and injury concerns hanging over negotiations, along with a lowered 2021 salary cap, Fuller might have to settle for a lesser deal. We’d advise teams to be more cost sensitive than usual when committing top wide receiver money to Fuller.

Smith-Schuster’s career has come in two parts: a couple years of outstanding production and efficiency followed by a fall into being merely average. Smith-Schuster totaled nearly one full win of value in 2017 and 2018, before producing only a quarter of win the next two seasons. Smith-Schuster’s comps leave a lot to be desired for a top free agent, but the matching formula only accounts for his recent subpar seasons.

Our baseline/expected projection for Smith-Schuster is only slightly higher than what he’s produced over the past two down years. The ceiling outcome looks much more promising, and it might actually be the most accurate with the forecasted WAR amounts lower than what he produced in his first two seasons. 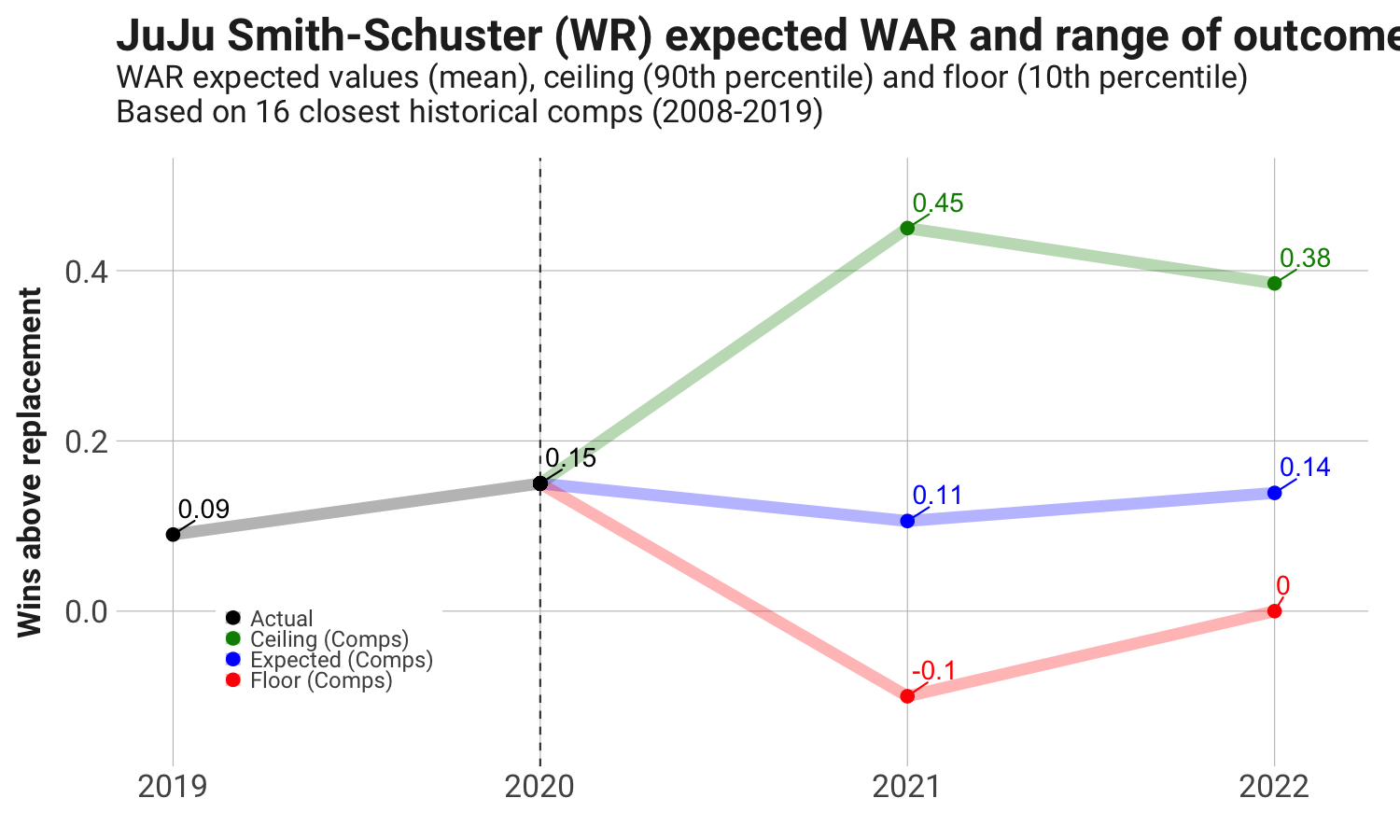 Smith-Schuster’s value projection isn’t close to our contract forecast at around $17 million per season. The question for teams will be whether you can reliably project Smith-Schuster off of two seasons of poor quarterback play.

Davis finally broke out in his fourth NFL season, posting his highest career WAR at more than twice the efficiency of his career average. The former No. 5 overall pick had shown flashes before, but nothing close to the totals we saw this season. Eclipsed on his own team by A.J. Brown, Davis has flown under the radar in free agency discussion despite his lofty draft pedigree. 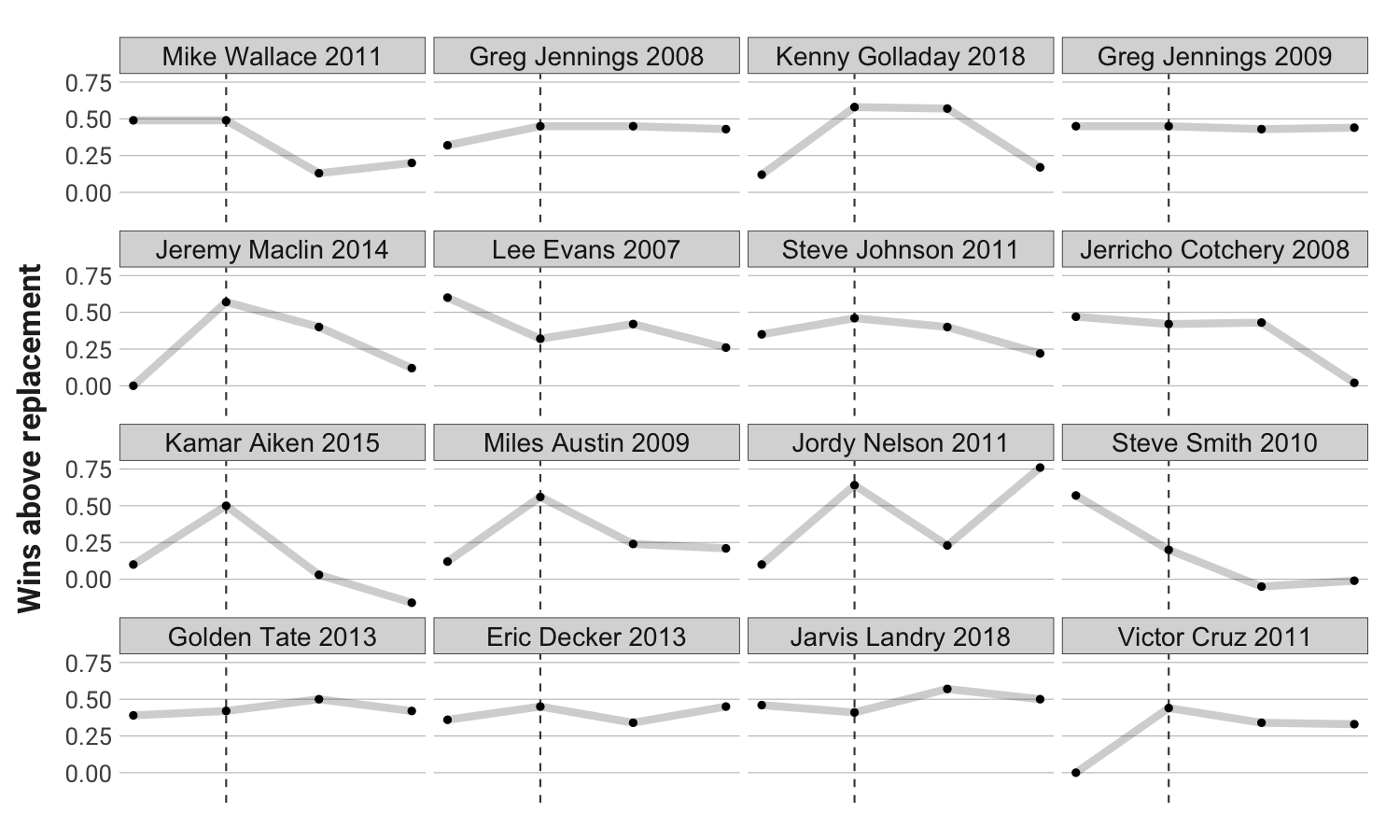 Davis’ ceiling is somewhat disappointing in light of his 2020 performance but strong on an absolute basis. His expected projection falls nearly exactly between his WAR production for the past two seasons. 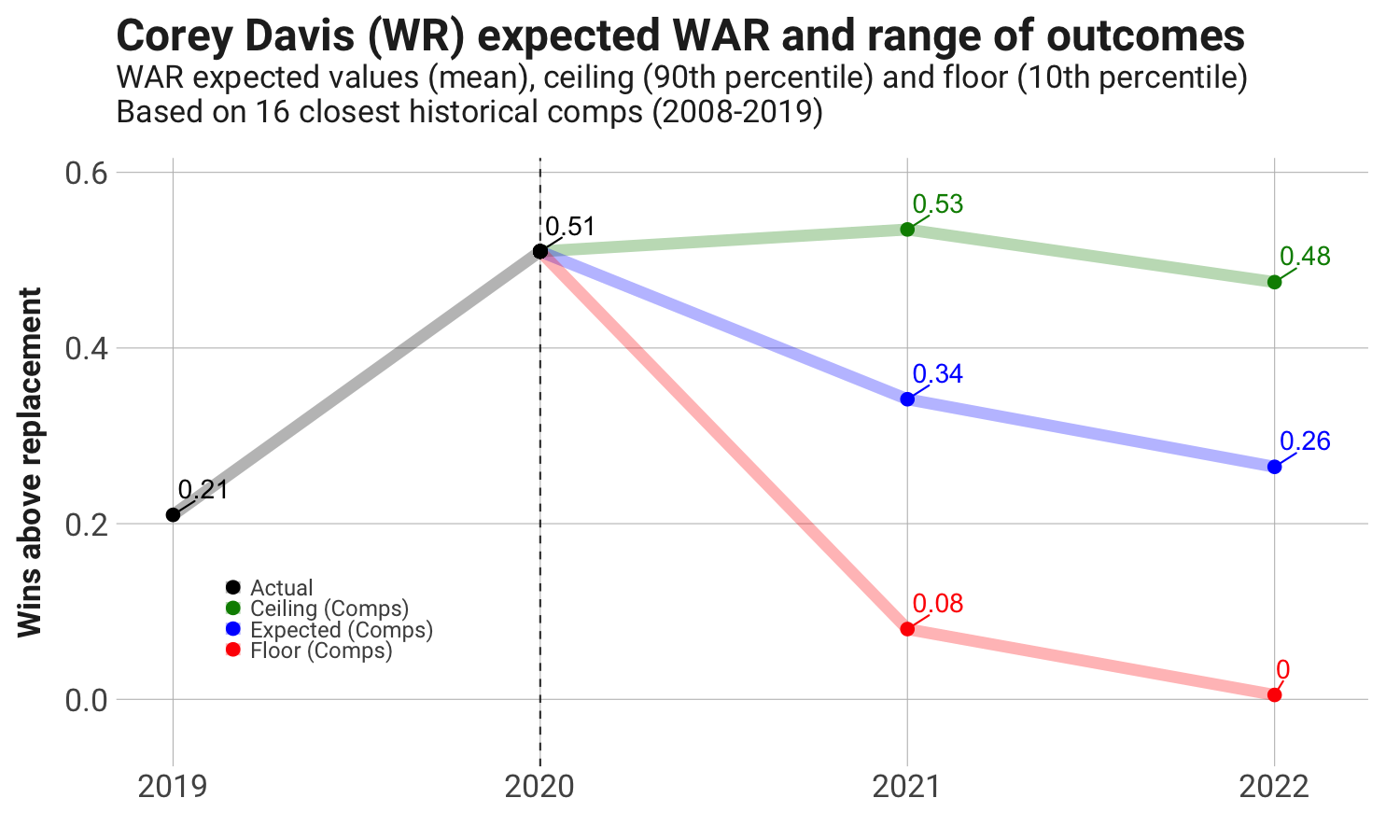 Davis shows more value potential than Smith-Schuster, though not a ton vis-a-vis his expected contract size of $16 million per season. If a team can obtain him in the $12-15 million per year range, he presents a strong risk-reward profile.

Brown is one of the most difficult players to comp, coming off of two seasons full of transgressions and missed play, following an earlier career good enough to eventually land him in the Hall of Fame. Even the once-great names on the list, like Wes Welker and Torry Holt, didn’t perform well after a decline in their early 30s. Brown could be heading down the same path, though there are more credible excuses for his lack of production. 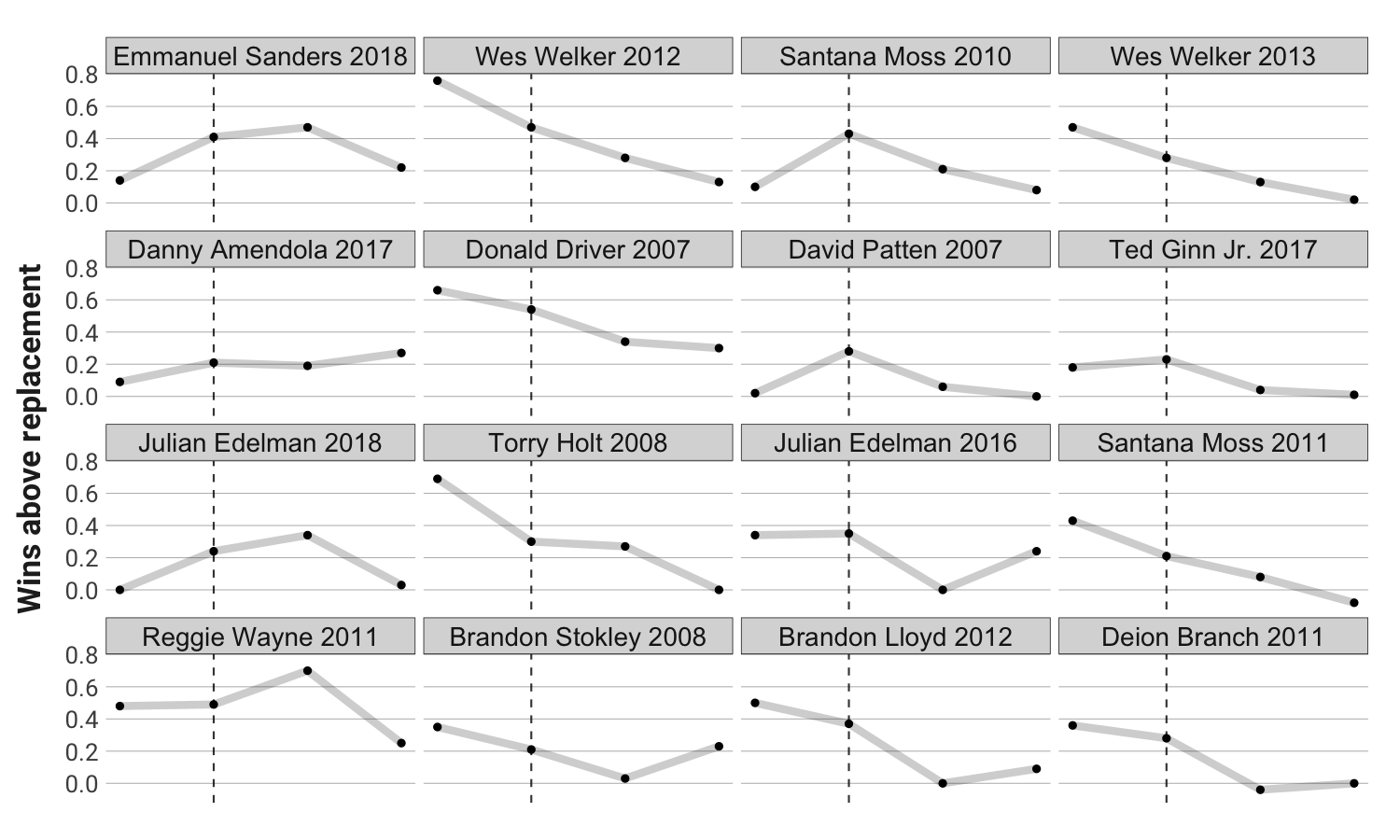 We expect Brown to largely match his 2020 WAR production in the next two years, which will take Brown through his age-34 season. 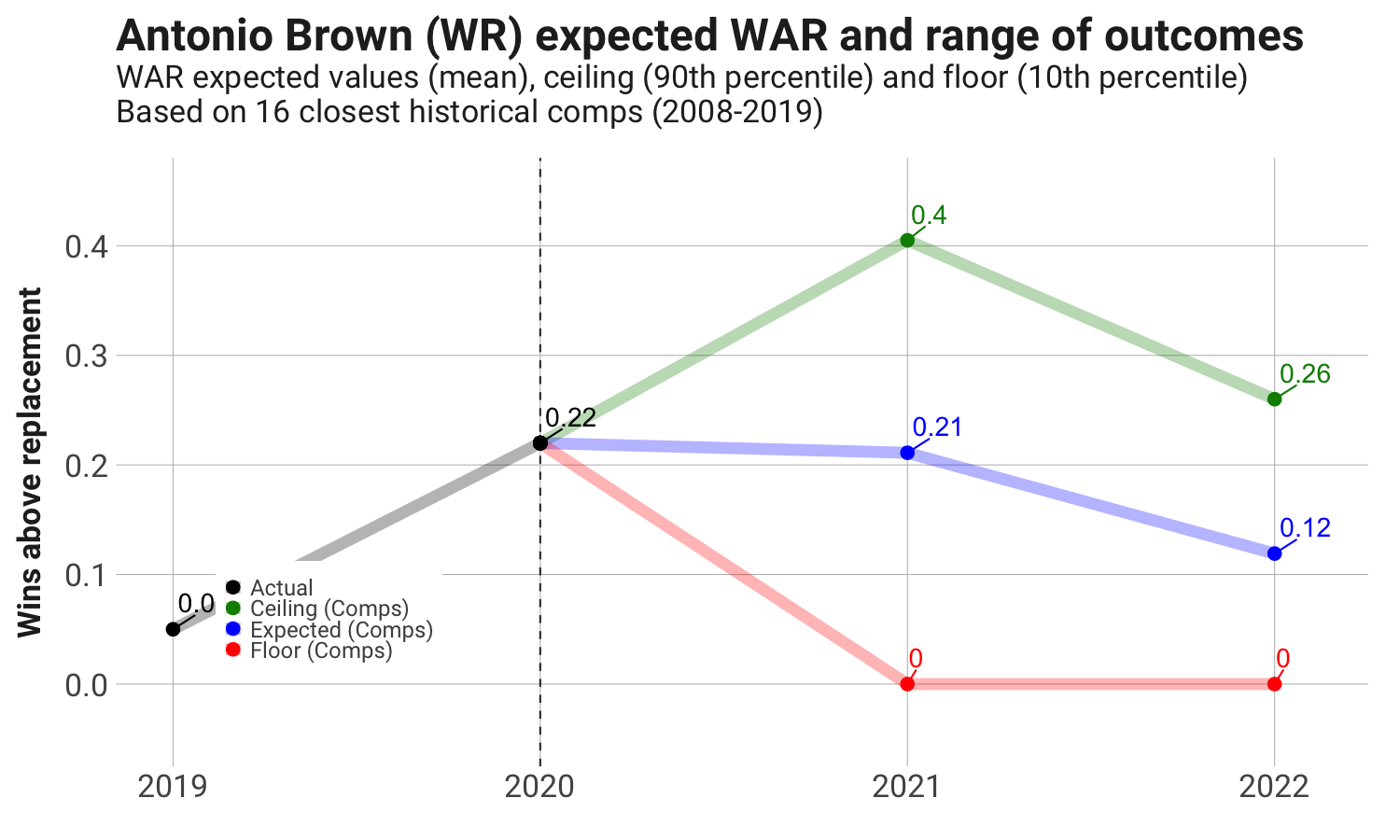 We haven’t forecasted the likely contract for Brown, but expecting more than a one-year rental would be optimistic. A contract up to around $10 million would be justified purely by the numbers, with tons of upside if he can avoid setbacks and return to previous form.

In his ninth NFL season, Hilton still provided some value, though not at the level of some previous years. Hilton will turn 32 years old this coming season, an age that typically coincides with decline. Not all of Hilton’s 16 closest comps are at his level of career production, but even the bigger names like Santana Moss, Golden Tate and Greg Jennings paint a risky picture going forward. 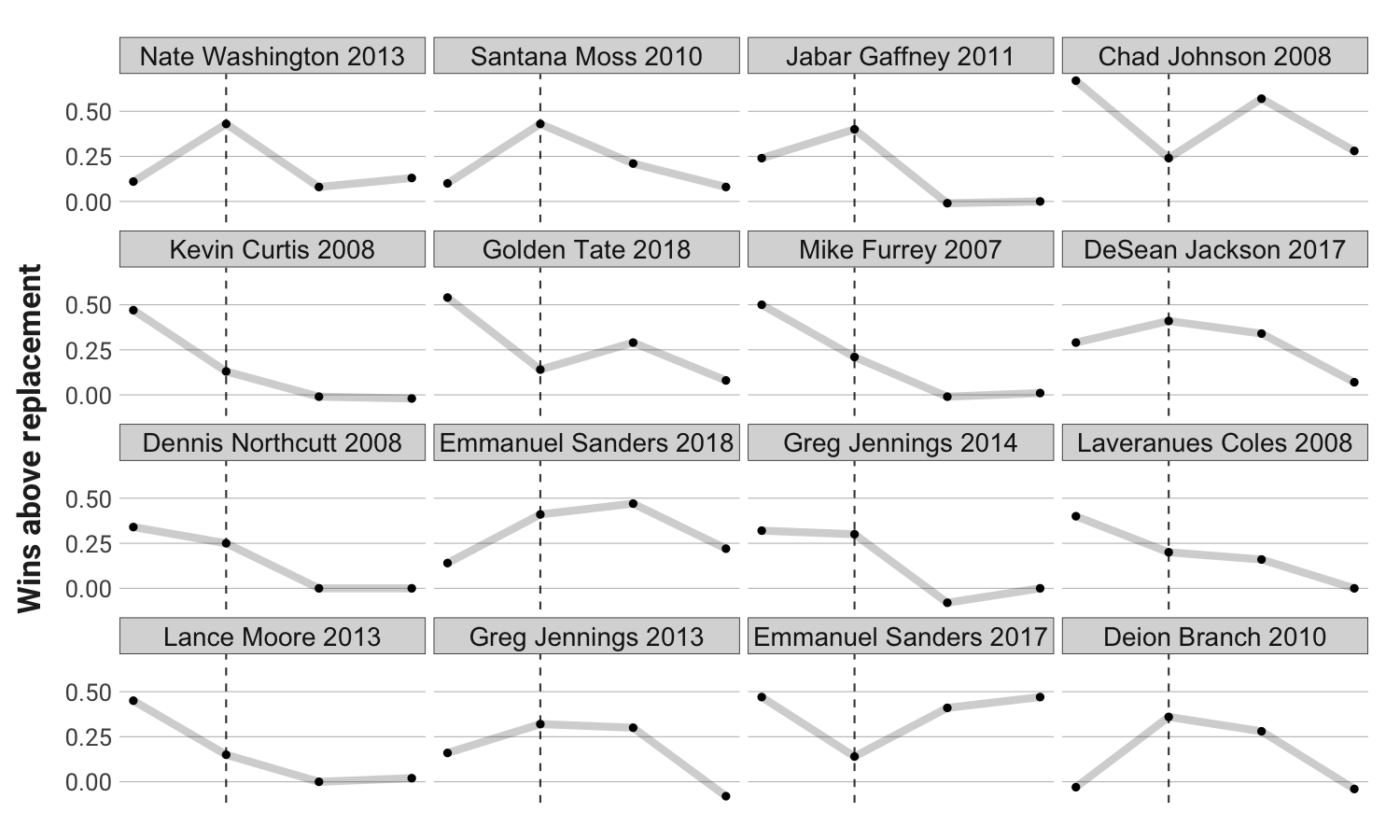 Despite the jump in production year-over-year, our projections see Hilton’s WAR most likely falling to below 2019 levels. Hilton has a decent ceiling for next season, and overall he looks like a much better one-year contract player than someone to pay for multiple seasons. 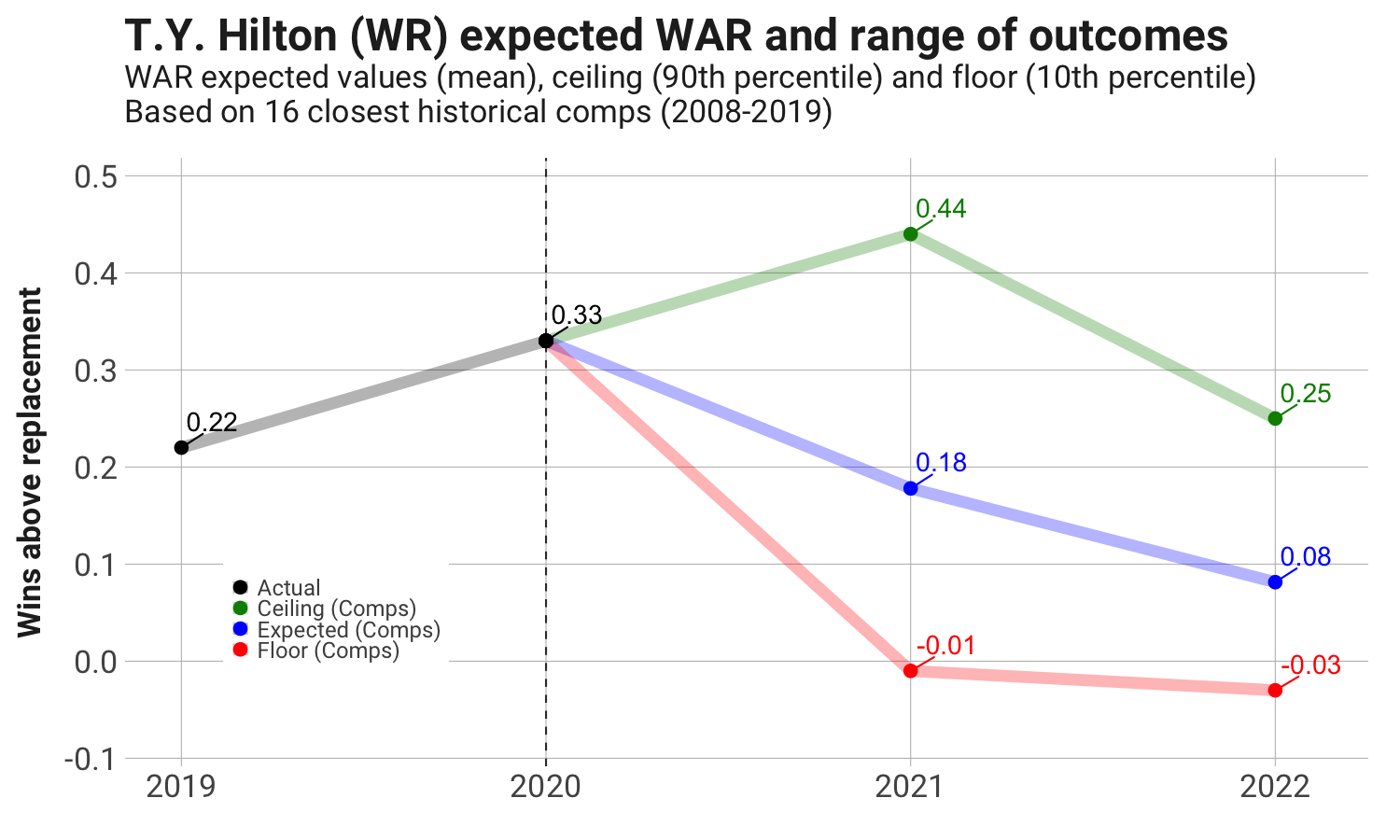 Hilton’s 2021 value ceiling of $18.7 million is intriguing. If a team finds him willing to take a one-year contract in the $8-10 million range, he looks like an excellent risk-reward play for a team in contention.