This article is part of a series that goes through our top-ranked free agents (excluding quarterbacks) by position group, using their past stats to match them with historical players.

We started with one of the strongest free agent wide receiver classes ever, and this article turns to free-agent tight ends. Once we have a sample of similar players, we can see how those similar players performed in subsequent seasons to get an idea of the current player’s range of outcomes. I’ll also include any potential bargain free agents who aren’t at the top of our rankings but look better than expected in WAR projections.

Buying wins in free agency is an expensive proposition, but the value of each incremental win for a playoff-caliber team cannot be understated. This year, teams will have tough decisions about how to spend that money.

For each of the tight ends below, the closest comparable players were found by measuring the similarity between them based on several features — age (within one year), weight, WAR, previous-year WAR, targets per game, average depth of target, PFF receiving grade and WAR per snap.

The most similar players across these metrics are grouped to calculate the expected WAR numbers for 2020 and 2021, with the weight of each comp reflecting the level of similarity. I didn’t use the same number of comps for all players, as it is more difficult to find a wide range of comparable seasons for older players.

Henry played on the $10.6 million franchise tag in 2020 and has another opportunity to hit the free agency market this offseason. There’s a large drop between the truly elite receiving tight ends, such as Travis Kelce and George Kittle, to the larger second tier where Henry belongs. That said, second-tier tight ends still provide a lot of WAR value relative to non-receiving positions, and a few of Henry’s comps had outstanding stretches in their age-26 and age-27 seasons. 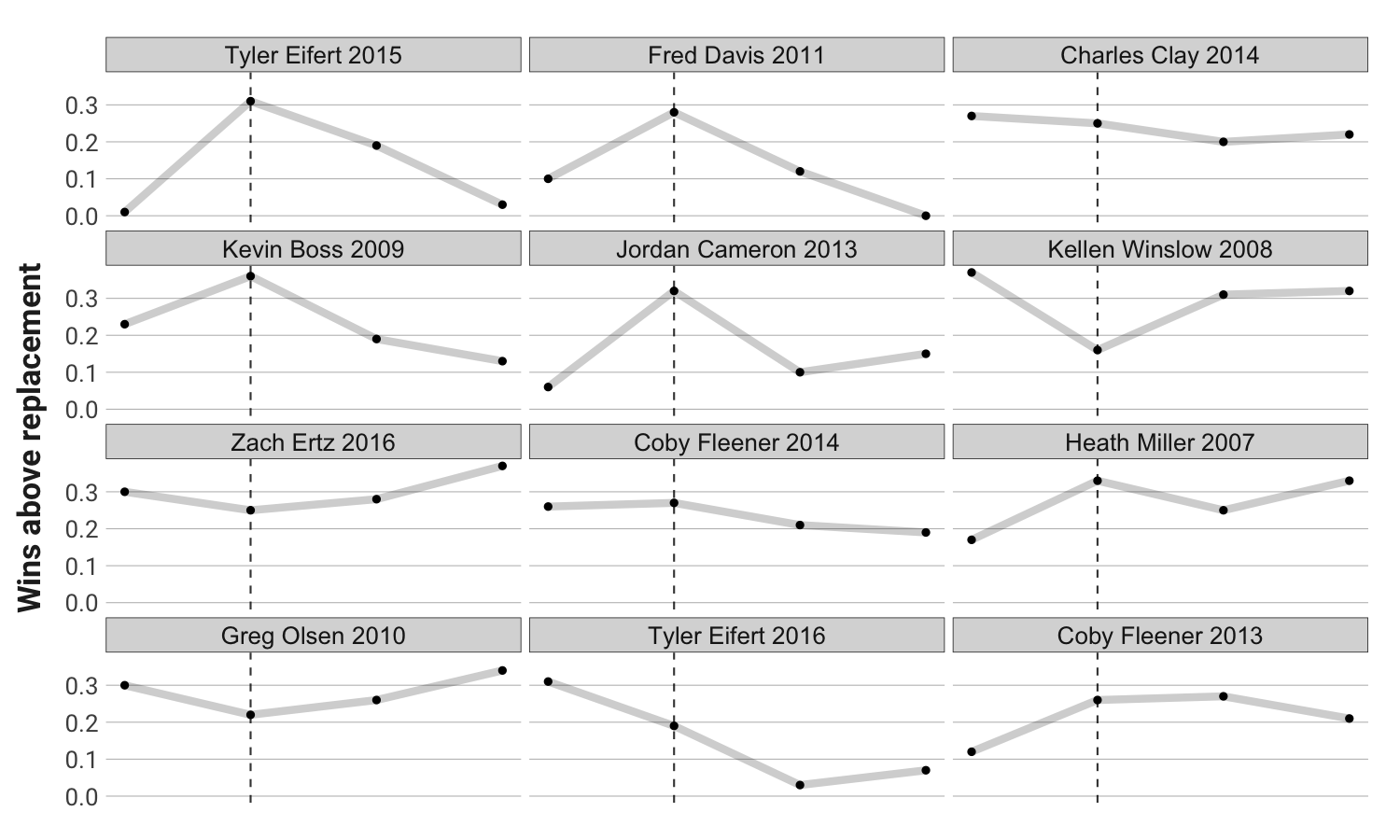 Any team would be happy to acquire Henry if he performs near the top of the projections, replicating the careers of Zach Ertz and Greg Olsen. Henry’s expected performance is more muted but roughly in line with what he’s done the past two seasons. 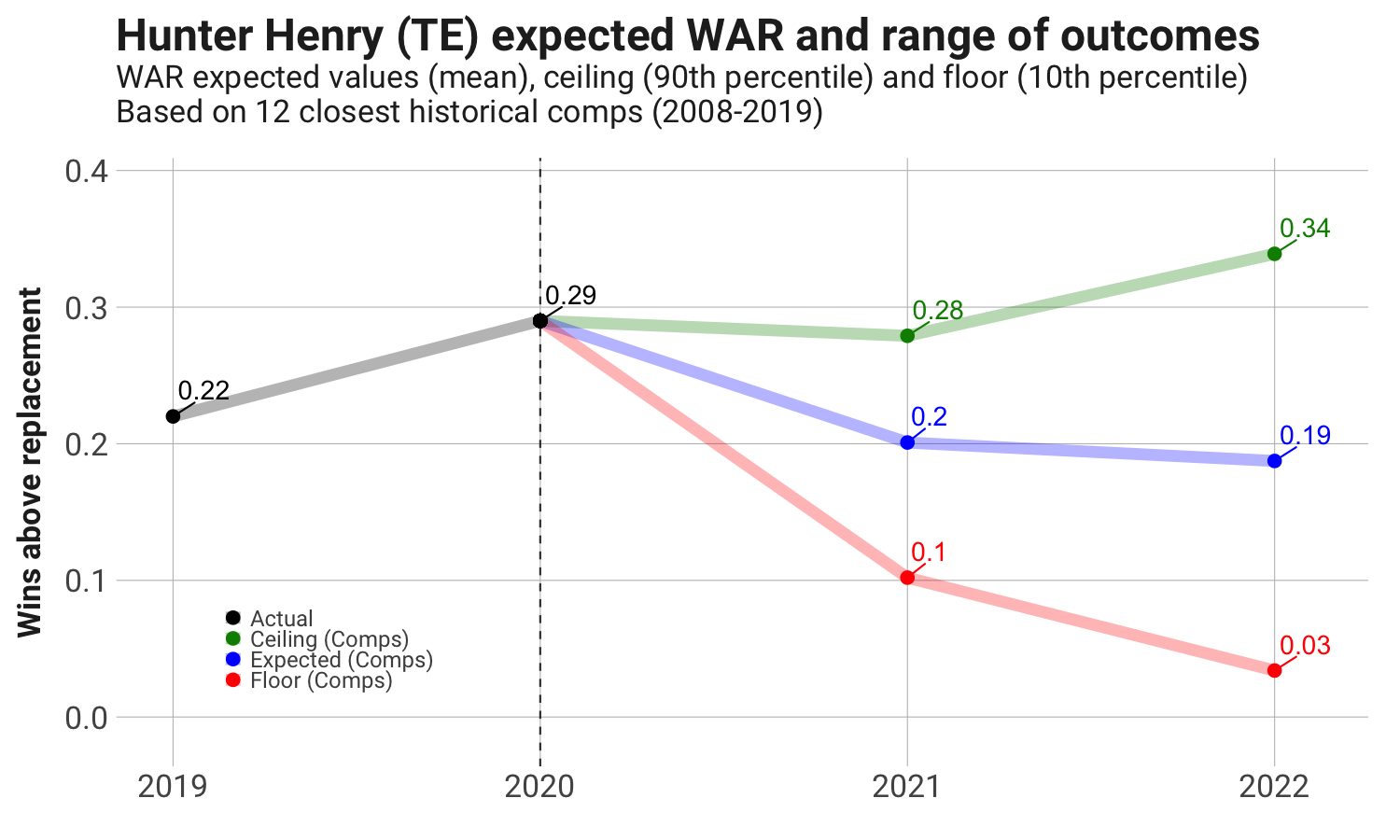 We expect that Henry will receive a longer contract worth around $12 million per season, slightly overpriced for his median outcome and a material discount for his ceiling. Henry will likely get a longer-term deal this offseason, but the Los Angeles Chargers could also choose to use a second franchise tag if necessary.

Smith has flown more under the radar than Henry, though he has only been incrementally less productive. Both tight ends are entering their age-26 seasons, but Henry was selected 65 picks earlier in the previous draft. Smith’s comps are impressive, as they include breakouts like Jordan Reed and Travis Kelce at the top of the list. 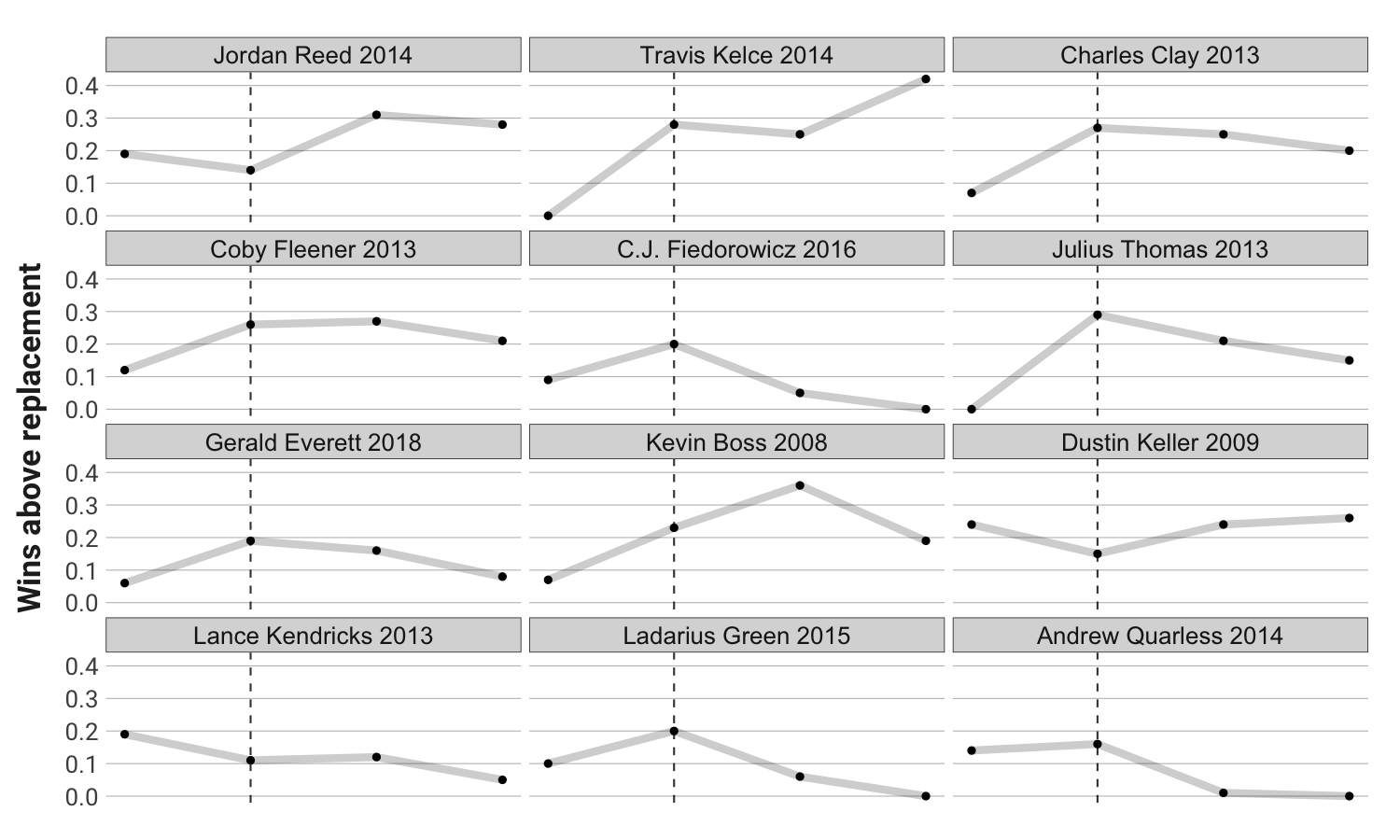 Our expected projection has Smith slightly building on his WAR progression in 2021, with a minor decline in 2022. His ceiling is also similar to Henry’s. 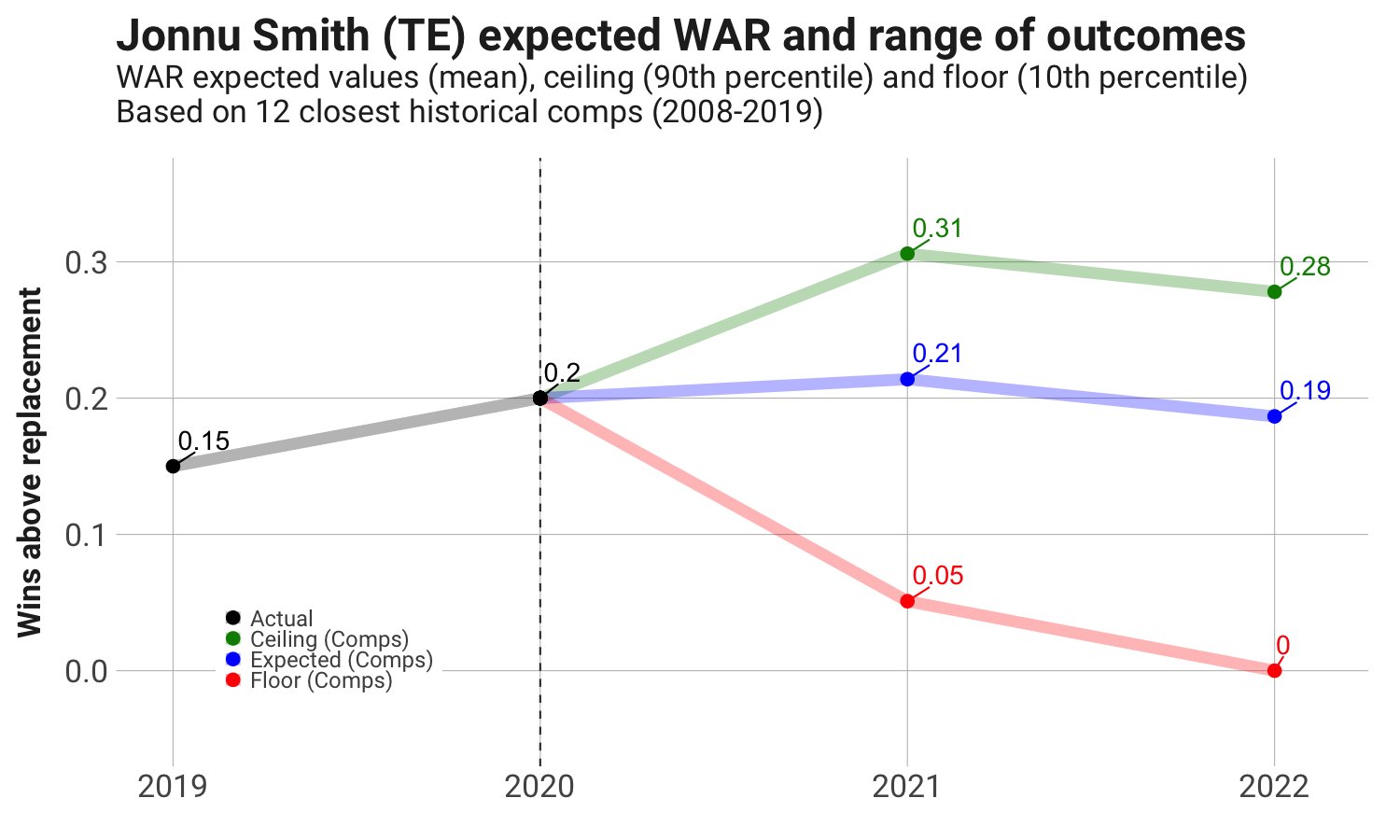 We see Smith signing at around a 30% discount to Henry, making him a bargain at the $9.5 million per year figure. Our expected value is $10.1 million per year, with a ceiling of up to $14.9 million.

Everett hasn’t been the dominant force in the passing game that the Los Angeles Rams hoped he would become when they selected him 44th overall in the 2017 NFL Draft. Everett has trailed teammate Tyler Higbee — whom the Rams drafted a year earlier and extended in 2019 — in usage and WAR production the last two seasons.

Everett’s comps include few full-time players, which drags down the aggregated numbers below. 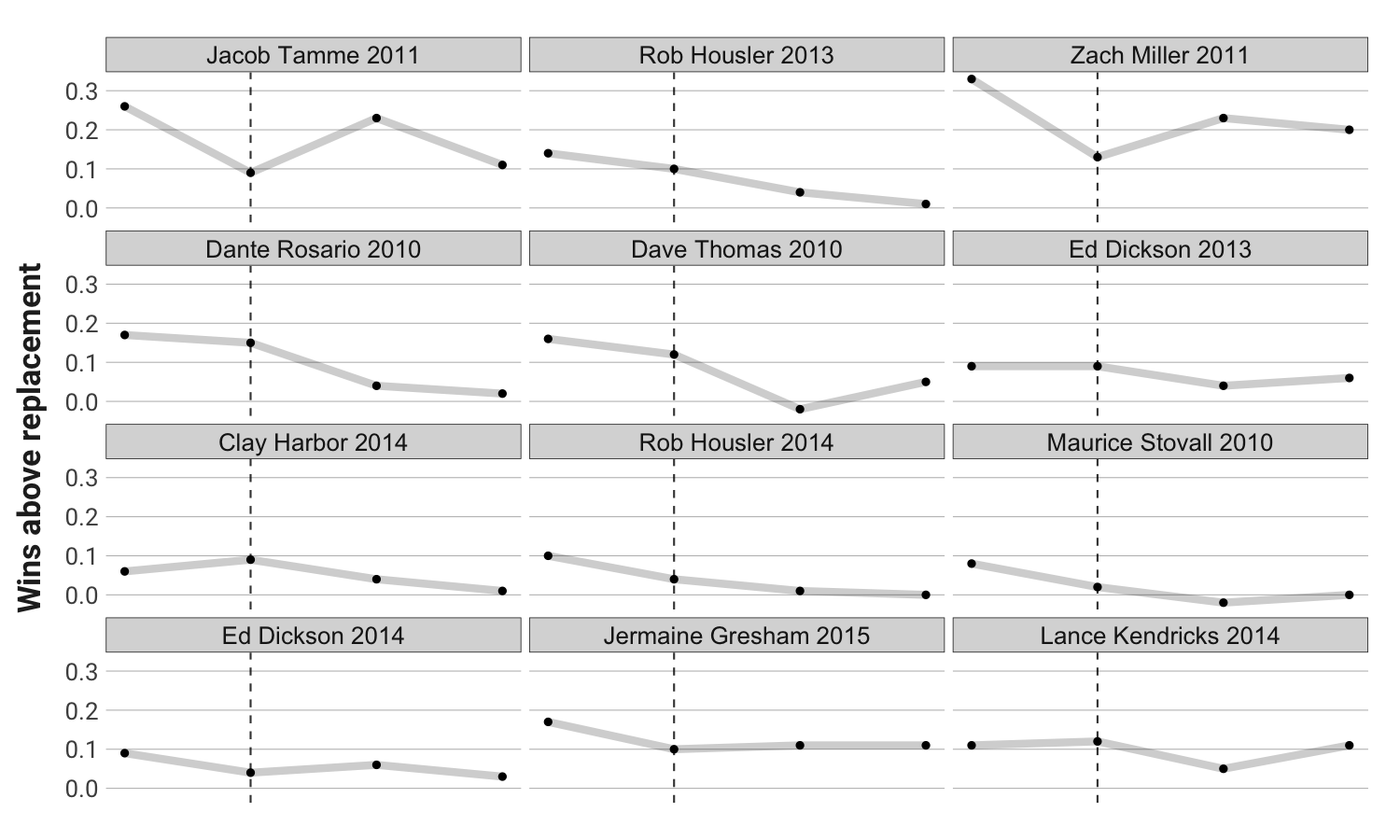 Out projections for Everett see his expected production flatlining around last year’s number, Everett’s worst output since his rookie season. There is an okay ceiling for Everett, which is likely what teams will be betting on if they can put him into an every-down role. 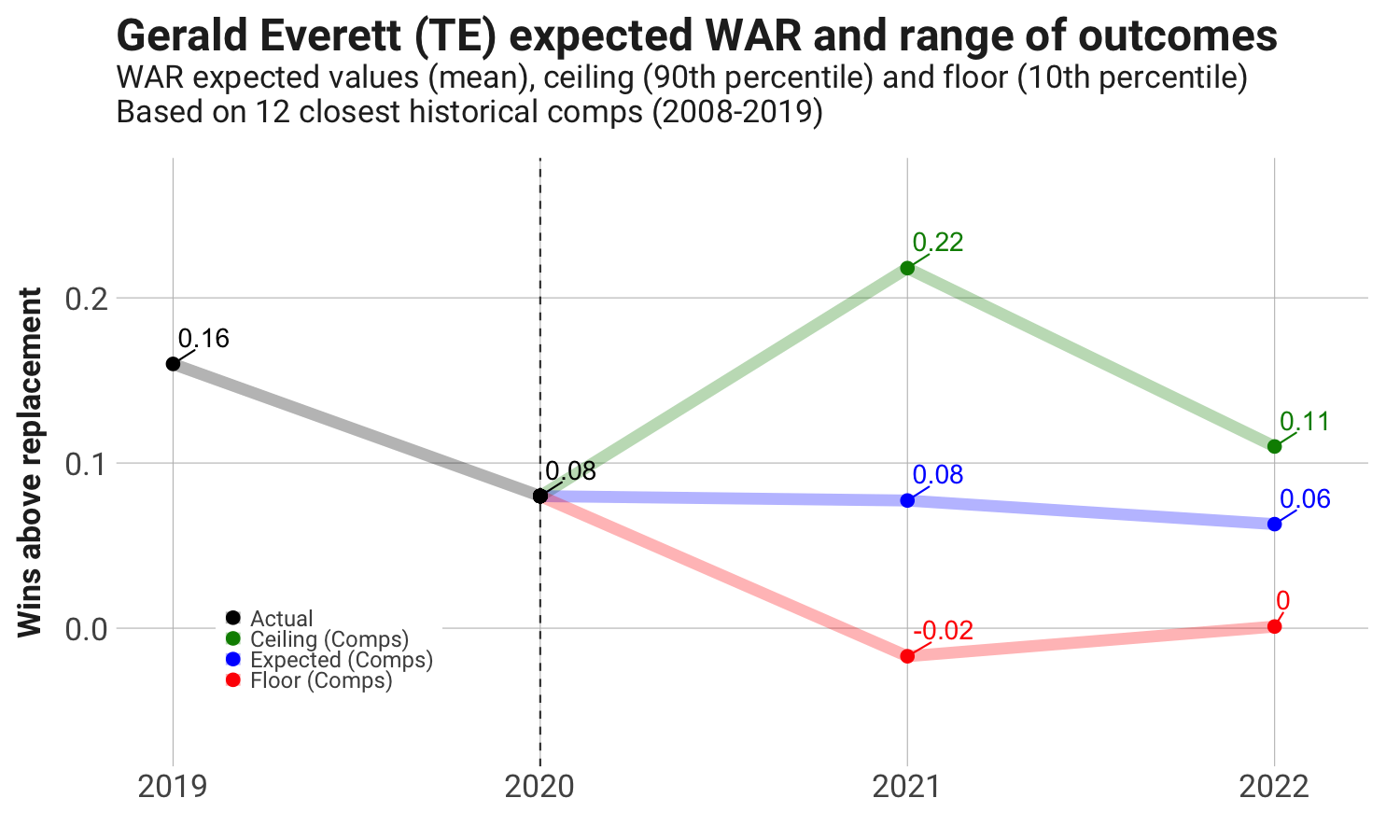 Everett's projected values are low at only $5 million per season.

Gronkowski will find his way to the Hall of Fame eventually, and his strong production in 2020 bolstered that campaign after taking a year off in a mini-retirement. Gronkowski isn’t that old, given that he'll be entering his age-32 season, shockingly the same as Travis Kelce. Jason Witten is another HOF-caliber player who is a positive comp going forward, but it's hard to point to any comp as appropriate for, perhaps, the best ever. 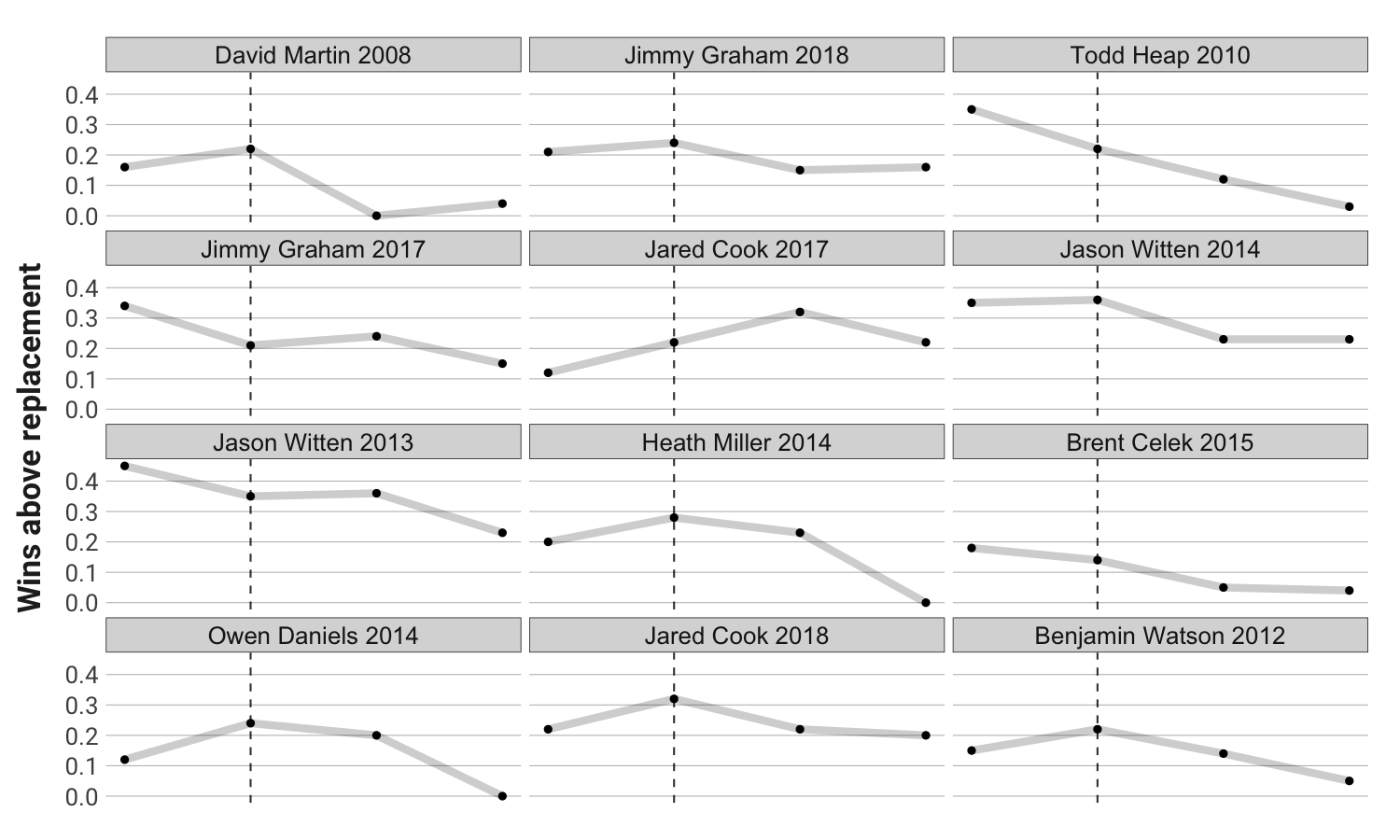 As Gronkowski ages, we project his WAR to decline in a linear fashion over the next two seasons. Gronkowski’s ceiling is decently high, so a return to Pro-Bowl level play could be in the cards. 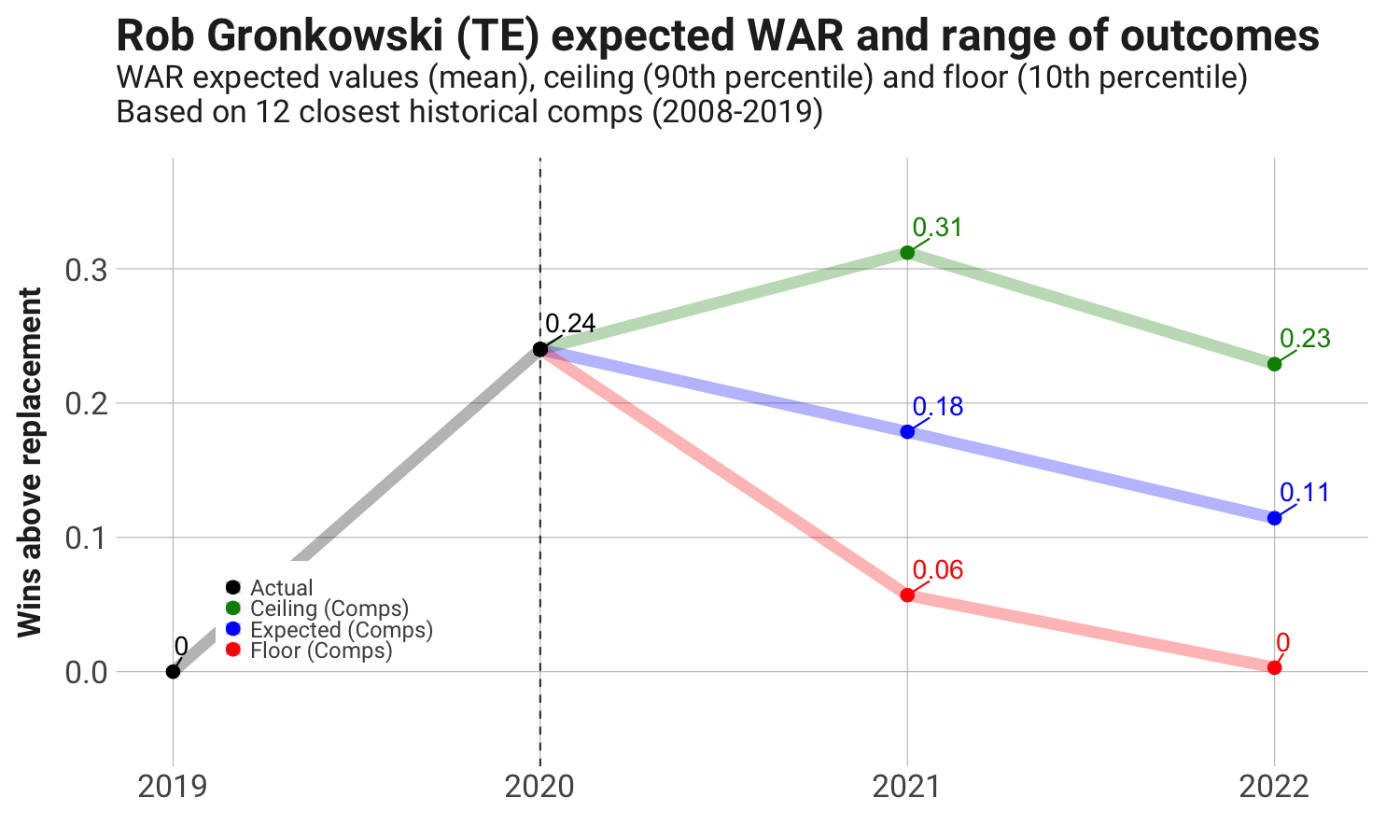 Our projection for Gronkowski’s contract is one year, $10 million. It’s on the higher end of the expected-ceiling spectrum but certainly within the realm of possibility.

Cook is the oldest of the top tight end free agents and hits 34 years of age in April. That elevated age is a negative for Cook’s comps, but some former tight ends maintained production into their mid-thirties. 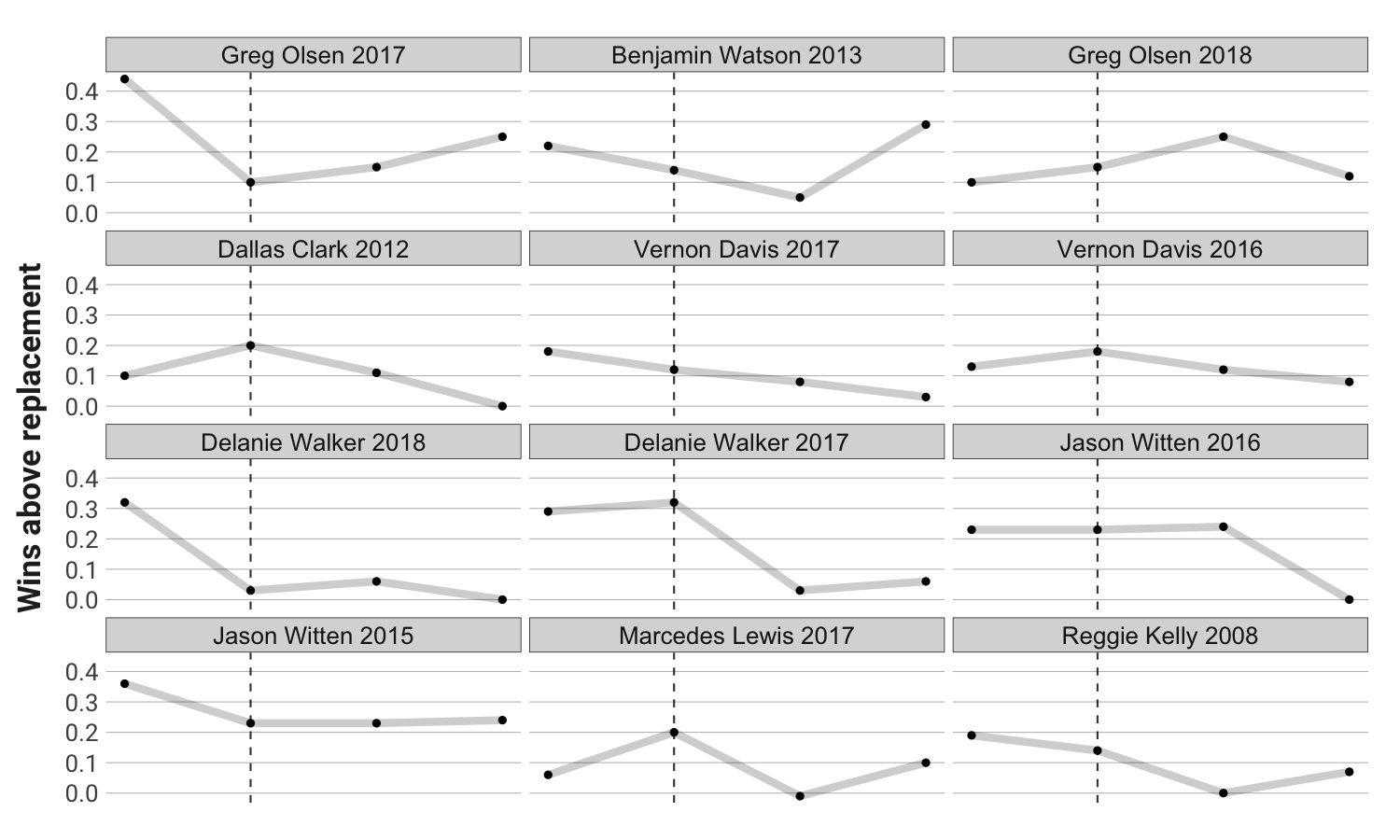 We expected Cook to take a step back. His ceiling going forward is roughly equal to what he’s done the last two seasons. 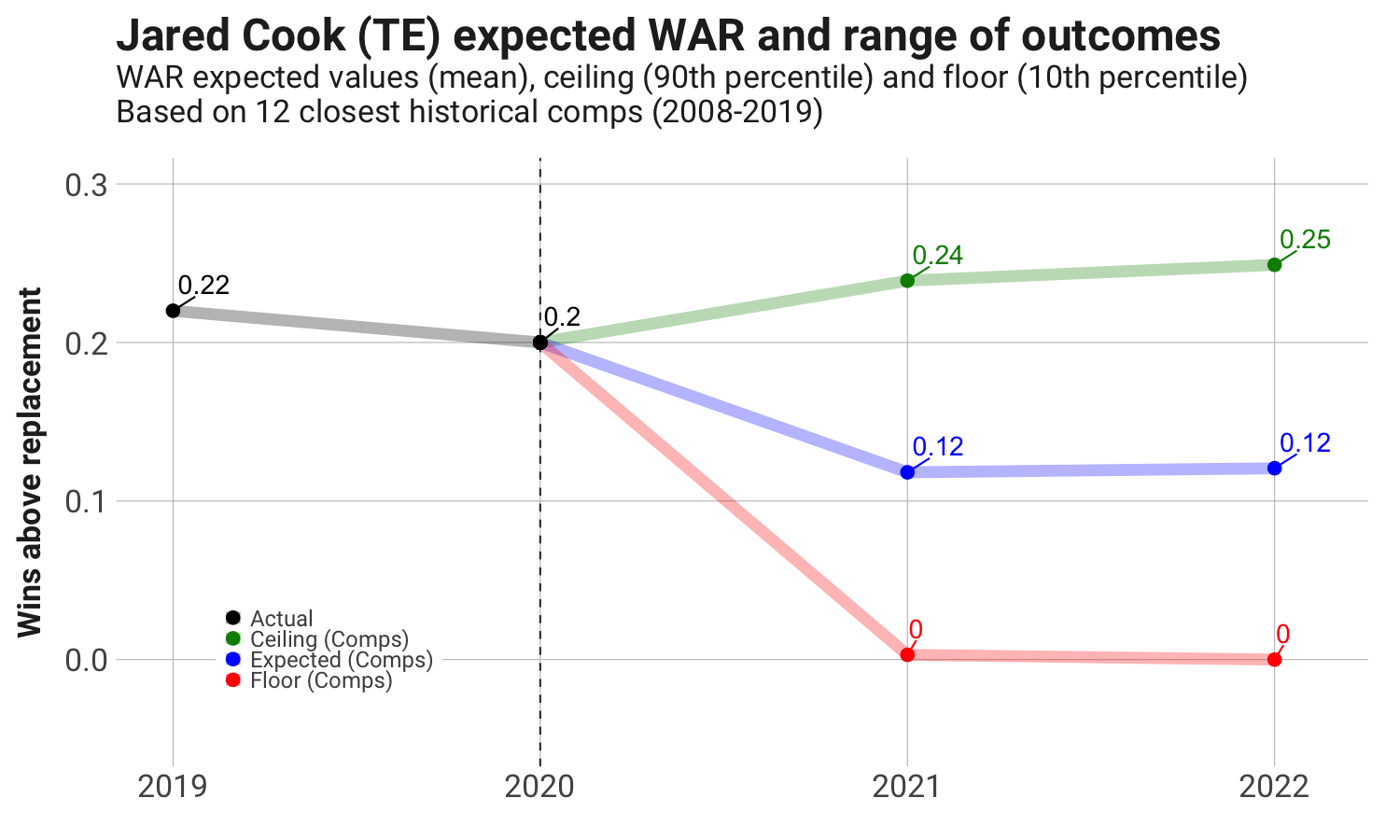 We project a one-year, $6 million deal for Cook, which would be a discount according to our projections. Cook looks like a cheaper option in the offseason for teams looking to add short-term support to a stronger roster.