We’re into the thick of NFL offseason rankings szn, as NFL rosters have taken shape following free agency and the draft, giving the opportunity to assess the various strengths and weaknesses throughout the NFL.

While the quarterback position isn’t the only thing that matters (sorry, nerds), it is indisputably the most important position on the field. And despite the relative stability of quarterback performance and the variability we see every season, the general public can still get caught up in what a quarterback did last season and not factor in enough what he’d done before that. This is because we all suffer from recency bias; we’re just not great at putting recent performance into context and knowing whether to ignore or heavily weigh what’s happened in the past.

This analysis will utilize a statistical technique called Bayesian Updating to solve those issues. It is a method PFF has used many times in the past, notably when we looked at a number of different draft classes, why the New York Jets needed to draft a quarterback this offseason and whether Carson Wentz has much to offer a new team in 2021. With Bayesian Updating, we can use the dynamics of the historical quarterback market and individual results to project their PFF grades and expected points added (EPA) per play.

You can find details of how Bayesian Updating is implemented here, including a primer on how we build a posterior belief (or projection) based on historical quarterback results, then update the beliefs (projections) for each quarterback with their actual NFL results on a play-by-play basis. We used these projections to forecast MVP probabilities last offseason, identifying Green Bay Packers quarterback Aaron Rodgers as a strong value bet.

PFF has found the most success forecasting quarterback performance using an equal mix of grades and the advanced efficiency metric EPA per play. In the past, we used only dropback information and ignored designed runs for a position that primarily derives its value through the air, but with the increasing frequency of designed quarterback runs and the fact that many of the NFL's top quarterbacks are also the most effective runners, the methodology has been changed to incorporate the play-by-play grades for designed runs and the EPA generated on those runs.

At the risk of boring you with the details, incorporating designed runs brought challenges, particularly with grading. The average play-by-play grade on a designed run is higher than it is on the average dropback, even though passing is generally more efficient. To counter this, we normalized the run grades to roughly match the distribution for dropbacks. We also chose to frame the numbers below based on the percentiles that they fall into for historical “franchise” quarterbacks or those who have participated in at least 1,000 career plays during the period of our data (2006-2020).

Below is a visualization of the first three years of quarterbacks from the 2018 draft class to illustrate the updating process. This is showing the “best guess” forecast for each quarterback using EPA per play. 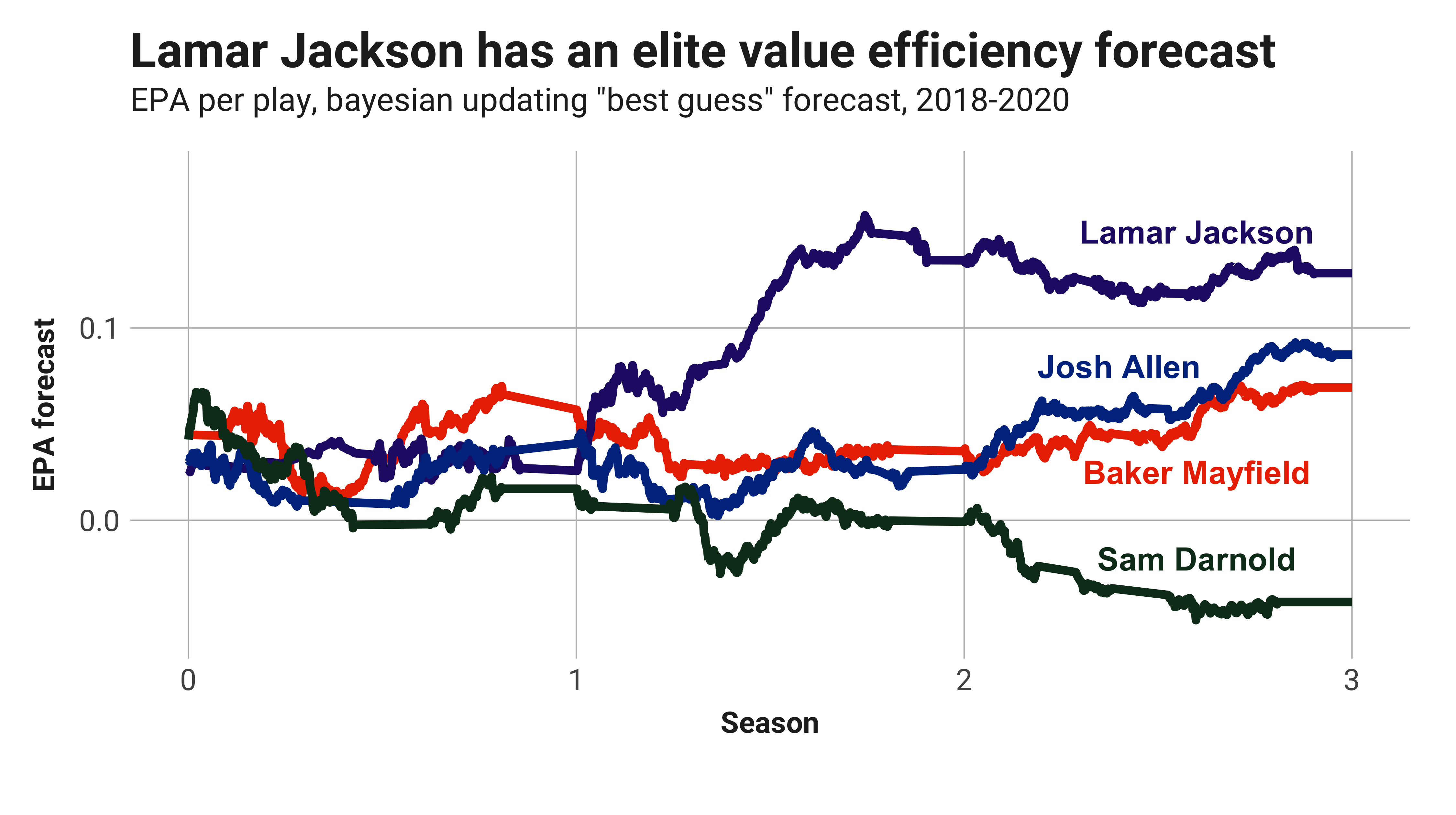 No one quarterback did a ton to differentiate himself in his first season, but Lamar Jackson stepped way ahead in his second year. Josh Allen and Baker Mayfield closed the gap in their third years, though not enough to make up for how efficient Jackson was in his unanimous MVP season. Allen didn’t jump as much in his third season as Jackson the prior year, mostly because he had a longer previous history of mediocre performance, giving less relative weight to his strong 2020.

That updating process is reflected in the rankings below, both for EPA per play and PFF grades. Rookies are excluded, and both potential starting quarterbacks for the Denver Broncos are listed. 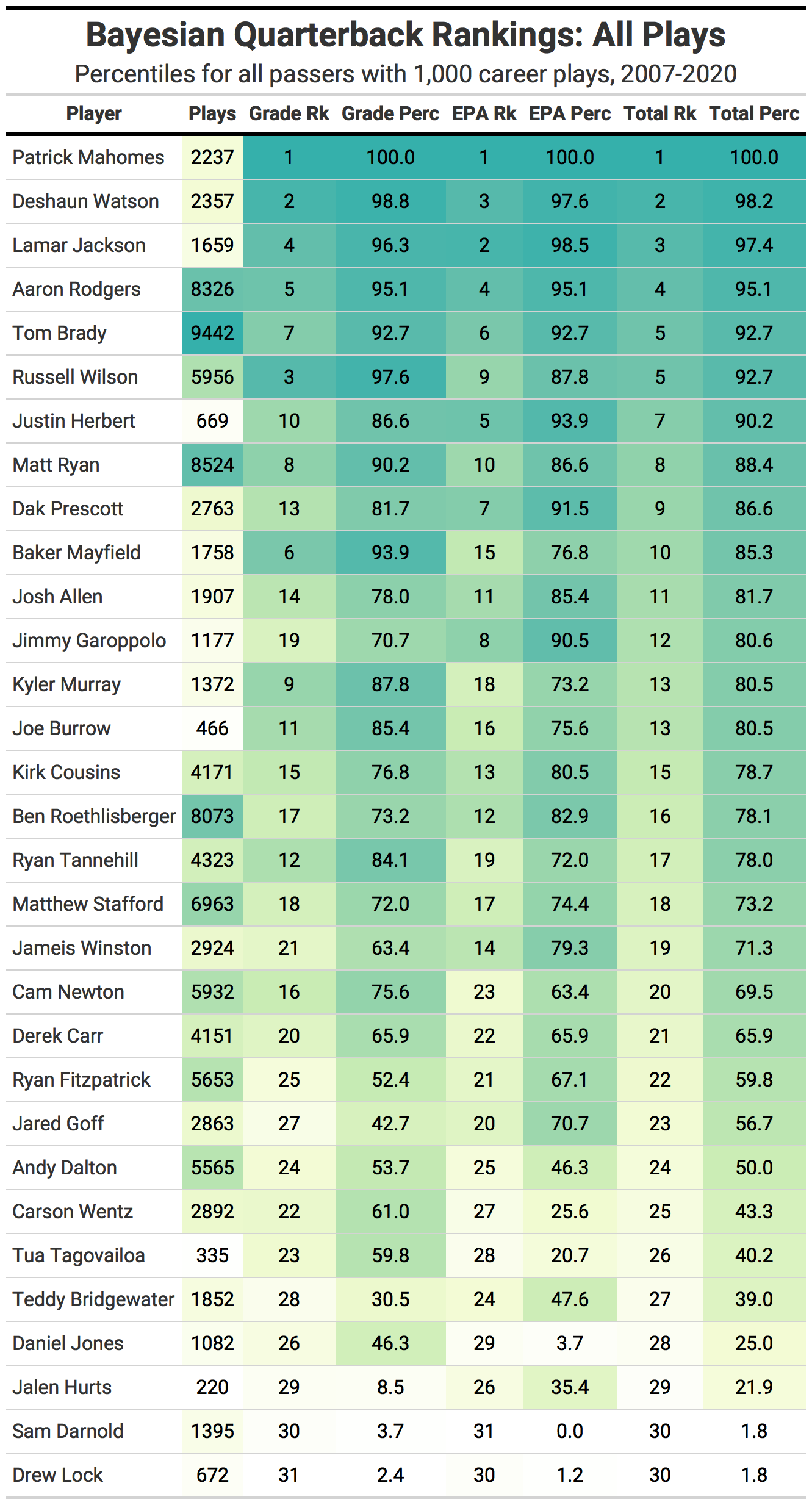 Patrick Mahomes is a tier unto himself. The Chiefs signal-caller has the highest Bayesian projections for PFF grades and EPA per play for any quarterback with at least 1,000 plays from 2007-2020. If anything, his 100th percentile in both measures understates how much separation there is between him and the rest of the crowd, especially in terms of EPA per play. Mahomes is roughly half a standard deviation above the No. 2 quarterback in grading but is separated from the crowd by more than two standard deviations in EPA per play.

Adding rushing grades and EPA to the mix gives Lamar Jackson a strong projection, though it is not quite at Deshaun Watson’s level. With Watson possibly out for this season (and potentially longer), Jackson is a surprise choice as the second-highest-ranked quarterback likely to start in 2021. I’m weighing designed runs more positively in my grade projections than the composite 0-100 grading you’ll find in PFF’s premium stats, mostly due to the outsized value Jackson’s runs have at equivalent grading levels.

Aaron Rodgers’ outstanding 2020 MVP campaign boosts him back into the top five for projections, following relatively down years in 2015, 2017, 2018 and 2019. The soon-to-be 38-year-old might not have a lot of time left but doesn’t look to be slowing down. NFL fans should hope that Rodgers can work things out and find his way back behind center this season.

Tom Brady and Russell Wilson are tied for fifth in the quarterback rankings. Wilson has a large divergence in grades and EPA projections, mostly because his propensity to take sacks shows up more negatively in the latter. Wilson’s standing has fallen in the eyes of many, but he still remains an elite quarterback.

Justin Herbert is already in the top seven after one season, and quite a rookie season it was. The question is whether he can maintain that performance, especially under pressure, where he led the NFL in PFF grading. Performance under pressure is notably less stable than from a clean pocket.

Matt Ryan and Dak Prescott come in eighth and ninth in the rankings, respectively. Ryan has been a steady performer over his career despite the Atlanta Falcons finding little success as a team over recent years. Prescott has a big gap between grades and EPA, with him proving to be more efficient on the field than our grading would have assumed.

The relative rankings of Baker Mayfield and Josh Allen will raise some eyebrows, but the key to understanding them is the fact that they reflect the entirety of their careers and not just this past season. I build into the projections a decay, or weakening of past results, but we can’t ignore how Allen performed during the 1,100-plus snaps he was part of in 2018 and 2019 for the 879 he played in last season. Mayfield gets a huge boost from his grading projection, which ranks sixth versus his EPA per play projection at 15th.

Jimmy Garoppolo at 12th, slightly ahead of Kyler Murray, is going to shock many. Garoppolo is heavily boosted by strong EPA performance, which is only partially offset by our weaker grading. Garoppolo has the fourth-highest EPA per play mark since 2014 for all quarterbacks with at least 1,000 plays, trailing only Mahomes, Brady and Rodgers. Our grading would indicate that Garoppolo is more a product of the system and has been lucky to generate so much EPA through yards after the catch, but we can’t exclude him from the rankings. Murray gets one of the largest boosts from adding rushing value to the rankings, moving from 17th only looking at dropbacks to 13th with designed runs.

I’m not going to go through every one of the rankings, but from a macro perspective, they show the strength of the overall NFL at the quarterback position. Andy Dalton’s total projection percentile is exactly at the median for historical franchise quarterbacks, yet he ranks 24th among the 2021 group.

This analysis doesn’t even include one of the strongest quarterback classes ever drafted this season, with five going in the first 15 picks. The NFL is set up well at the position for the future, which is good for the league and good for its fans.