Our own Jeff Ratcliffe has been unveiling his fantasy rankings tiers for 2019 over the last couple of weeks. And while it isn’t quite this simple, at wide receivers, you wouldn’t be crazy if you said Tier 1 was made up of the first-round receivers, while Tier 2 had the second-rounders.

That means, per his tiers, DeAndre Hopkins and Davante Adams are along as first-round receivers (as it happens, that’s how I have them in the PFF Fantasy staff rankings as well). Tier 2 is, unsurprisingly, deeper, going five names deep (I’d have a sixth, but that’s not germane to today’s discussion). Tucked within that fivesome, back-to-back in the rankings, are New Orleans’ Michael Thomas and Cleveland’s Odell Beckham Jr. If you run into the debate between these two in your drafts in 2019, which one should you go for?

Thomas has been in the league three seasons, and his worst PPR finish is that time is WR7. That’s a testament to his health (he’s played 47 of a possible 48 career games), his upside (he has 17 career games of 20-plus PPR points), and his floor (he has 11 more receptions than anybody else in the league over the course of his career despite being 84 targets behind the leader). If you want to ding his extreme upside, his floor of WR7 is paired with a ceiling of WR6. Obviously, nobody else has such a tight range of outcomes at any position but Travis Kelce (currently on a three-year run as the TE1). You never know with any player, but with Thomas, it’s as close as you can get. 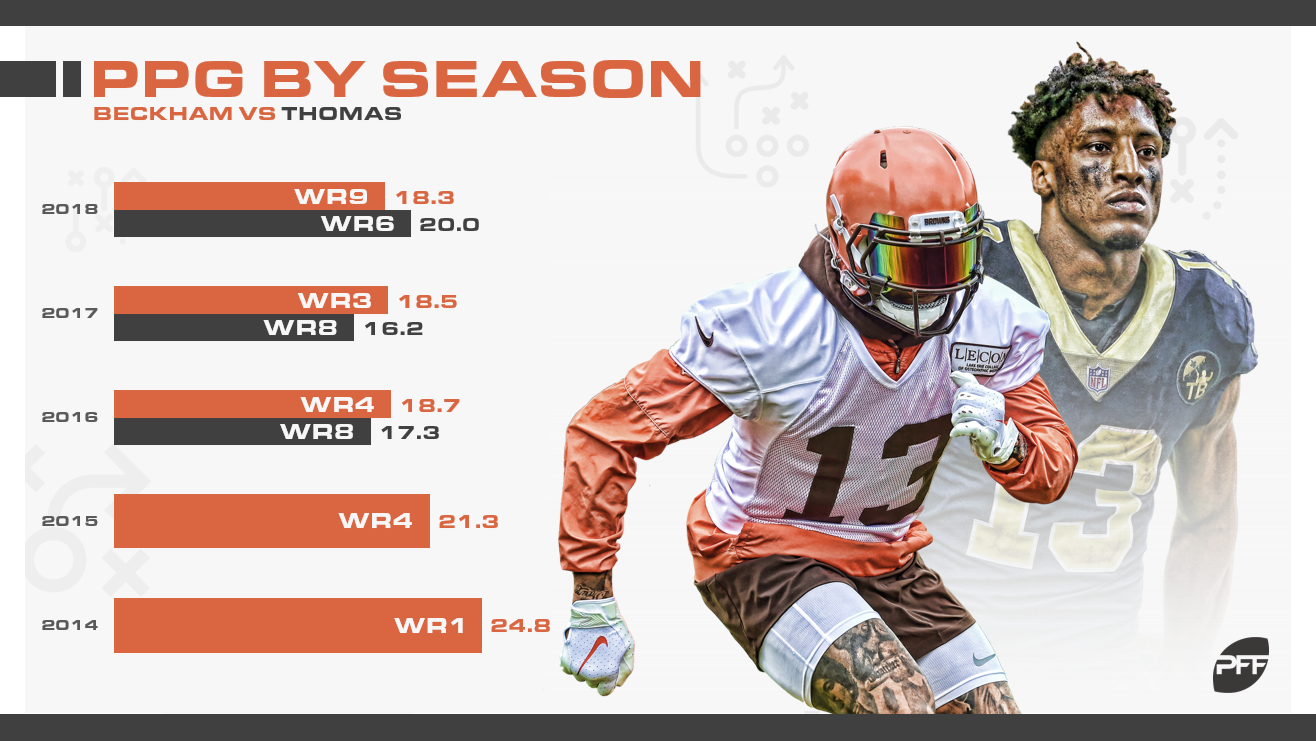 Beckham has offered a higher ceiling over his career, topping the 20-point mark in 47.5% of his career games (28 of 59) and maybe the highest single-game floor of any player (he has exactly zero games of under 5.0 PPR points over the last four years, the only receiver who can say that) … when he plays. Because while Thomas has missed one game over his career, Beckham has missed 21 games in his five seasons, including exactly half of the possible games over the last two years. He has played all 16 games only once, in 2016.