The recipe for fantasy football success can be easily summed up: Draft bell-cow running backs and a trio of mid-round wide receivers who exceed expectations and stack them with the correct mid-level quarterback. Yes, it's important to pick up a value tight end, but that particular position is a different battle for a different day.

Yesterday, we compared the production from a top-end running back to that of starting running back. Today, it's time to glean some insight into the wide receiver position overall and at the individual player level.

First off, The mean fantasy-point-per-game differential between WR1 and WR24 is 8.9 fantasy points. 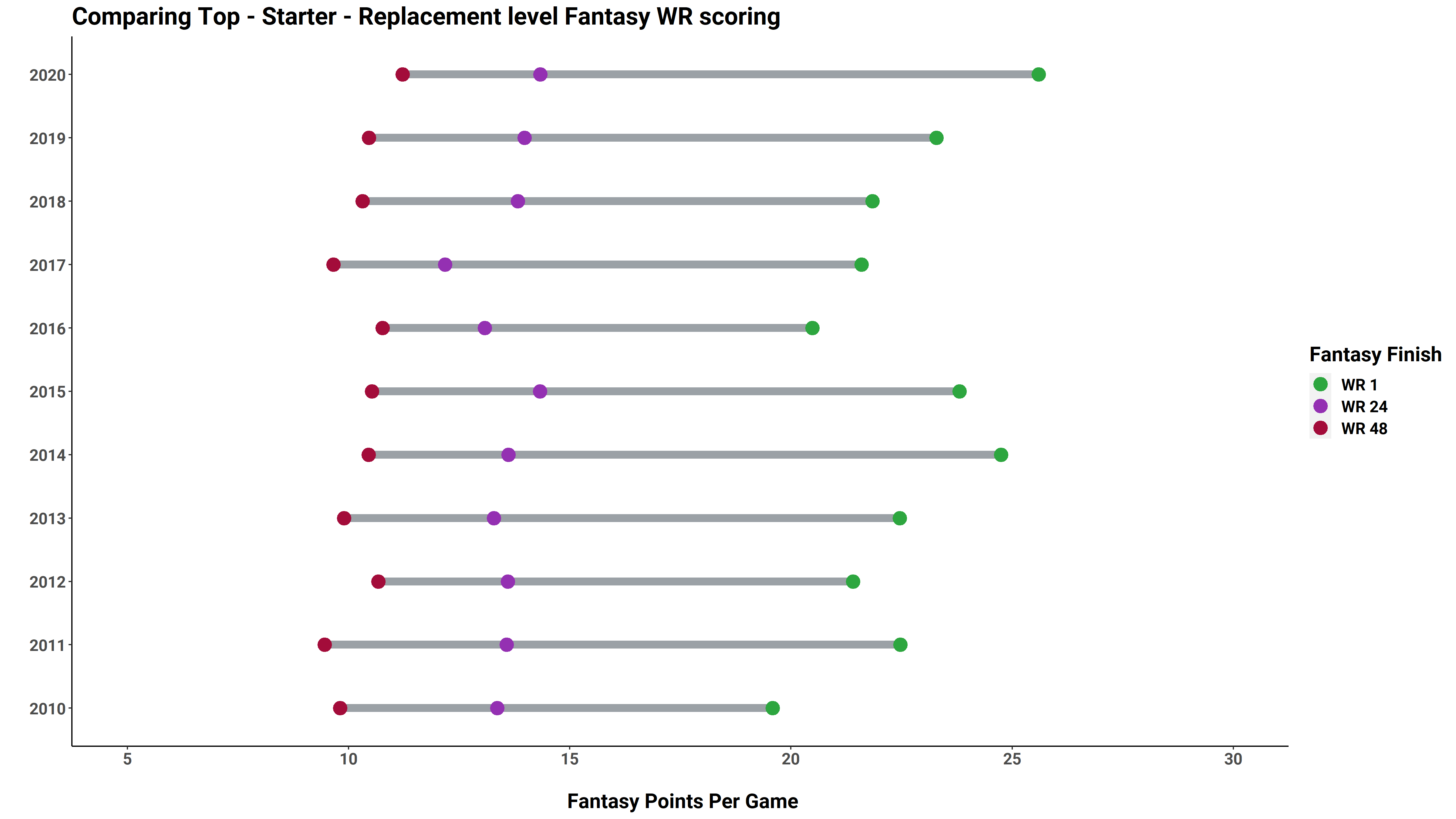 This mean is much lower than it is for running backs, which works against the strategies that focus on accumulating star wide receivers.

One way to view this positional fantasy point differential is through box plots. Below is the weekly scoring output for the top player at each position from 2010-2020. 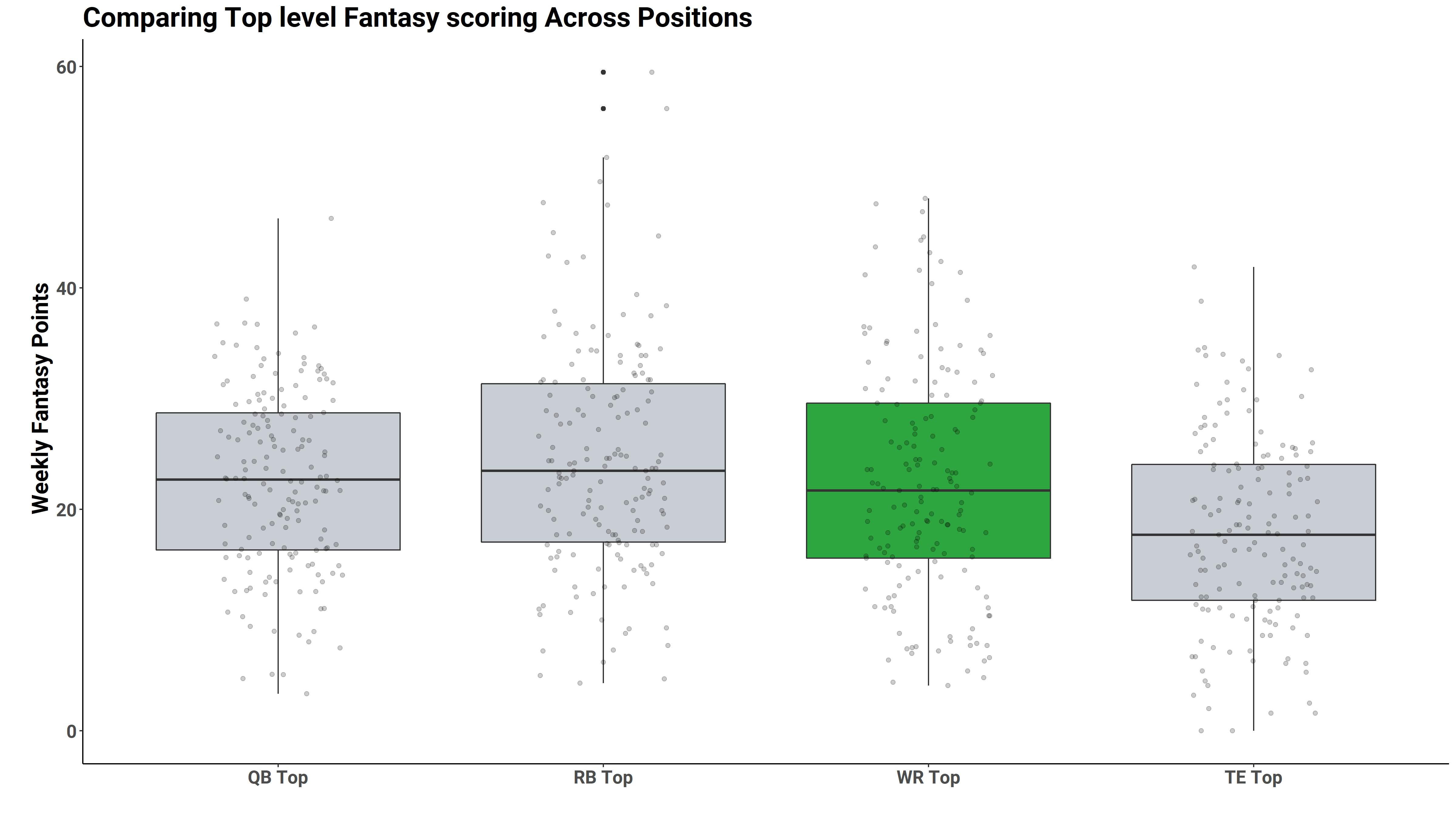 The mean top-end output for running backs is greater than all other positions. It also offers a higher floor and blow-up potential. A 75th-percentile tight end performance is close to the mean expectation for the top running back, but there are ulterior reasons why buying into a tight end early could be the best approach in fantasy.

The next level we can compare is the fantasy scoring among starters across each position. 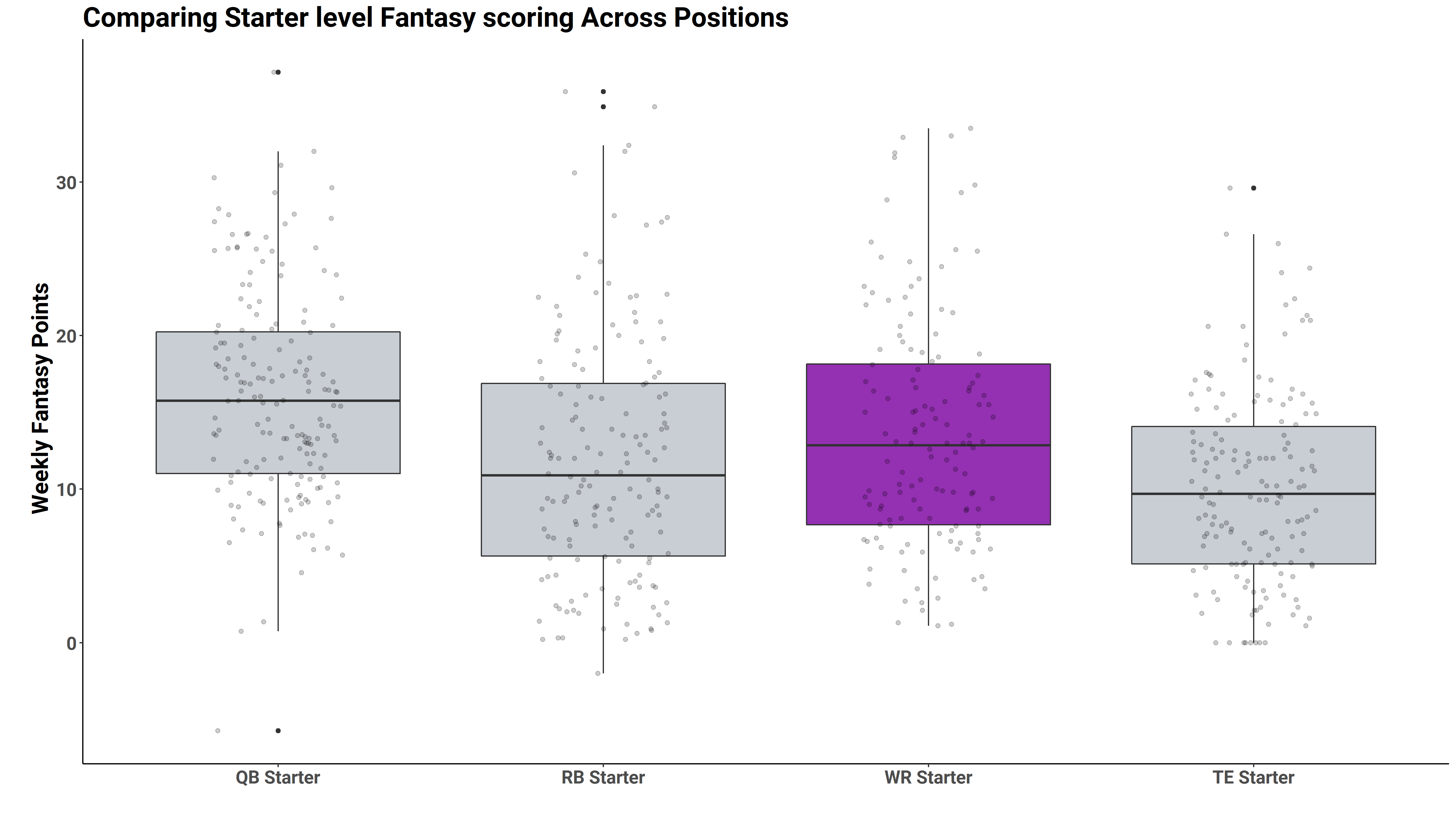 This accurately highlights the depth available at the quarterback and wide receiver positions. Unfortunately, neither can match the top-end talent at running back, and the starters don't offer enough output to separate from the top-end performers.

This is the key positional argument to grasp. In most home leagues, having the top-end quarterback or wide receiver doesn’t impact your point differential at the position as drastically as at the running back or tight end position.

This becomes even more apparent when looking at the replacement-level scoring at each position. 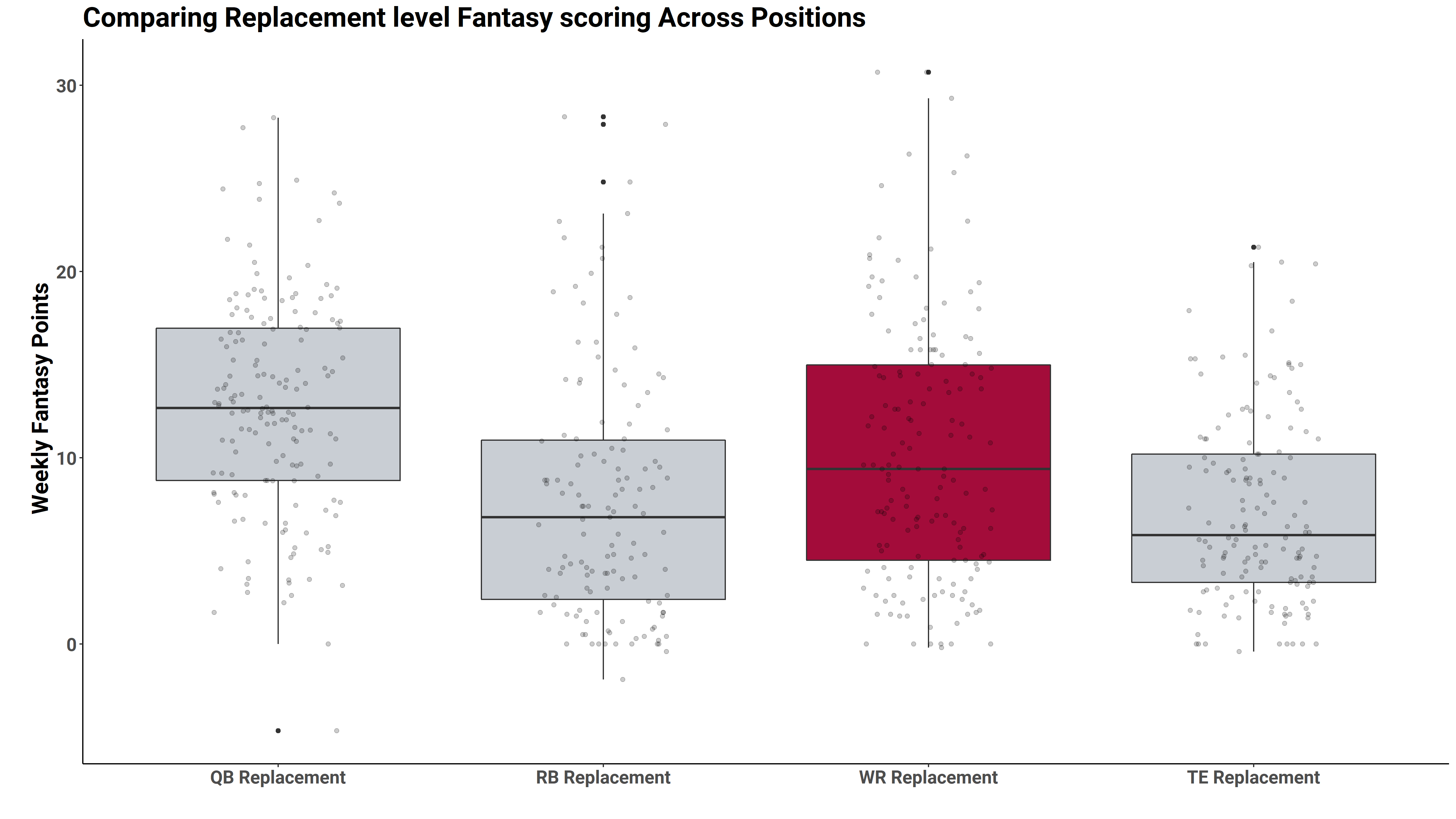 The understanding of position-level value should drive home the point that bypassing the top wide receivers to start the draft is the easiest way to fantasy success at the end of the season.

If one particular draft offers a value (relative to ADP) too enticing to pass up, then, by all means, gain some exposure. But, few of the players in the first two tiers will be on my fantasy rosters in 2021. Let’s walk through each tier with comments on “my guys” and “my fades” in each ADP range.

With the acknowledgment above that I won’t have much exposure to Ridley, he is still my favorite wide receiver in this tier. His season-long receiving prop is tied for the highest among others in the first two tiers. He is also the odds-on favorite to have the most receiving yards this season. If you are at all lower on Kyle Pitts than the current market consensus, Ridley deserves the early edge to lead the position in fantasy scoring.

Tier 1 players aren’t actually fades. This is simply an acknowledgment that I most likely won’t have any fantasy teams with Hopkins. Don’t hate the player, hate the cost. Also, the volume expectation has to be lower for Hopkins than any other player in his tier. Blame Kliff Kingsbury. Blame the four-wide receiver sets. Blame Kyler Murray’s rushing ability. The fact is that everything adds up to Hopkins finishing outside the top five wide receivers on fantasy scoring.