Which team position fantasy streaks will end in 2018?

If you played fantasy back then, you probably remember: “Denver’s No. 1 running back” was an intriguing draft pick every year. The Mike Shanahan offense gave you fantasy goodness. It was just a truism.

The flip side of that, of course, is Browns quarterback. Derek Anderson finished as the No. 6 fantasy quarterback in 2007, but other than that, the Browns haven’t had a quarterback finish better than 20th in fantasy scoring this century and have famously had 14 different No. 1 fantasy quarterbacks in those 18 seasons. If you just pretended “Cleveland quarterback” didn’t exist, you were better off in fantasy — if there was any difference at all.

Today, I’m looking at teams that have had the most and least successful runs at certain positions in recent years, and whether those runs are likely to end or continue in 2018.

(Note that this is more about situations where a team’s leader has changed in our time span, particularly for the bad finishes. You don’t need me to point out “Antonio Brown has been good a long time and will continue.” This is for situations, like Denver RBs and Cleveland QBs, where the names have changed, but the results haven’t.)

Four No. 1 quarterbacks in the last six years; one finish higher than 20th. 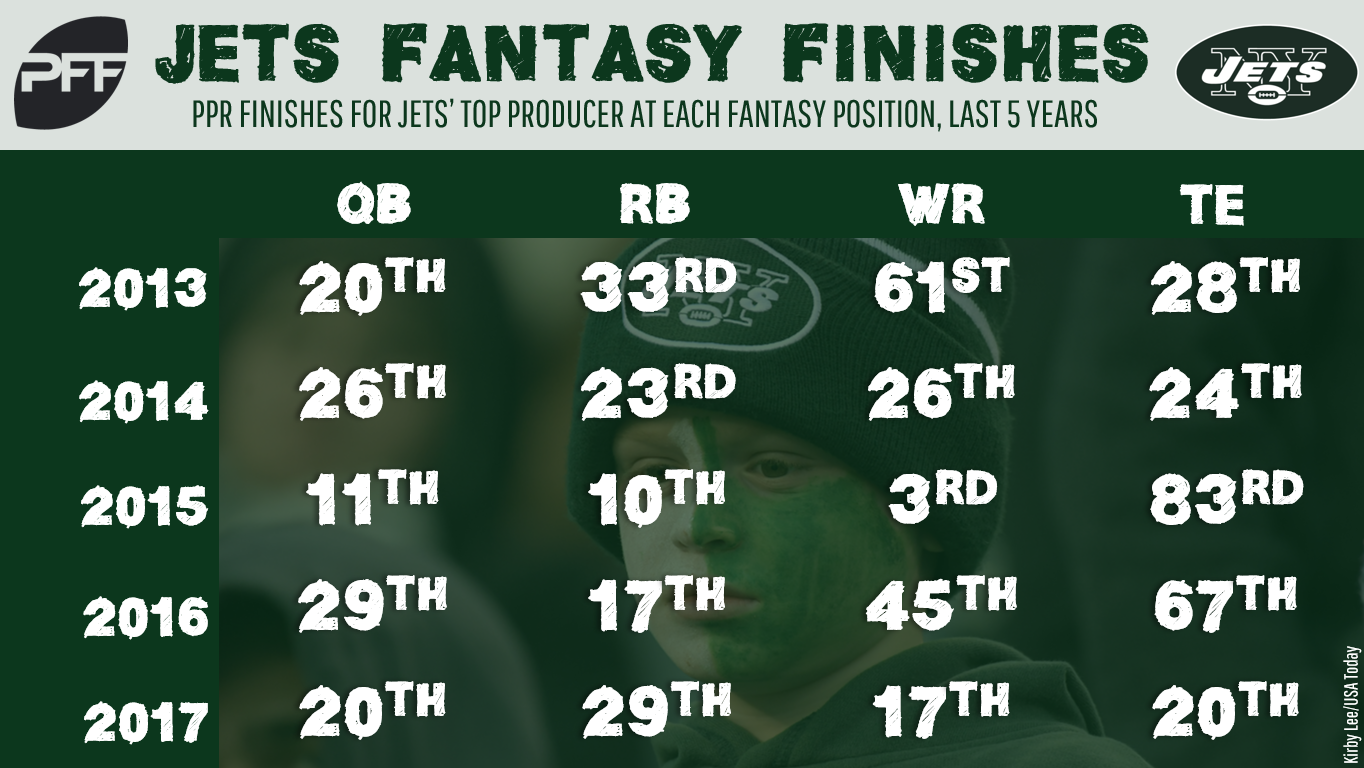 That 2015 Fitzpatrick season is one of the great outliers of recent fantasy memory, but things are actually trending slightly upward for the Jets. McCown finished 20th in fantasy scoring last year, but that was with missing three games. Extrapolate his per-game scoring to 16 games, and he would have been QB10, just ahead of Ben Roethlisberger (and that’s without giving him credit for the game in which he was injured.

Will it continue? Probably. The Jets still don’t have much of a receiver corps, with Robby Anderson, Quincy Enunwa, and Jermaine Kearse as their top three receivers and no logical replacement for departed TE Austin Seferian-Jenkins. But the most damning fact for the Jets’ QB situation in 2018 is that McCown is only the starter for now, and any bad stretch will see him replaced by rookie Sam Darnold or free agent signee Teddy Bridgewater. With no quarterback likely to go all 16 games, the chances of the Jets having a top-20 fantasy QB in 2018 are slim.

Five No. 1 quarterbacks in the last five years; no top-20 finishes.

The Texans haven’t actually had a quarterback finish better than 20th in fantasy since 2010, smack in the middle of the Matt Schaub era. Deshaun Watson was well on his way there last season before he tore his ACL, but other than that, there hasn’t been much to get excited about from the position in a while. (Also, hey, there’s Fitzpatrick again.)

Will it continue? Probably not! Even if Watson regresses a bit from his ridiculous 2017 performance, he seems more than safe to finish as a top-20 fantasy quarterback so long as he’s healthy. This streak seems to have an expiration date.

Will it continue? Maybe not! If either of Tyrod Taylor or Baker Mayfield is the Cleveland quarterback for more than 12 or 13 games, there’s an outside chance (particularly for Taylor, given his legs) for a top-20 fantasy finish here. I won’t go so far as to say I expect it, but you have to at least concede things are looking (ever so slightly) up.

Four No. 1 running backs in the last five years; no top-20 finishes.

Coming out of the Ahmad Bradshaw/Brandon Jacobs era, the Giants have struggled to find any consistency at running back. Paul Perkins was maybe going to be that guy, but instead averaged under 5.0 PPR points per game over two years and is now unemployed. It’s easy to mock a team for taking a running back second overall in the NFL draft, but if you’d been that frustrated for that long … it kinda makes sense, you know?

Will it continue? No way! So long as Saquon Barkley stays healthy as a rookie, it’s hard to imagine he finishes outside the top 10 in fantasy, let alone the top 20. This streak is on life support.

Seven No. 1 running backs in the last 10 years; two finishes higher than 25th.

The Doug Martin era was supposed to be so much better in Tampa Bay, but instead they were left with two monster seasons, four disappointments, and a 2017 departure in free agency. And because they were expecting so much out of Martin that he failed to offer, the Buccaneers had to make due with inferior backups in his bad years, leading to only one team finish higher than 40th in the last five years.

Will it continue? It probably depends on how you define the “it” here. Ronald Jones is likely to have the highest percentage of the team’s overall workload of any running back in the last six years other than Martin’s big years. That could lead to a top-25 season without stretching too much. Top-20 or top-15, though? That might be a stretch for a rookie behind a subpar offensive line. Definite maybe here.

Eight No. 1 wide receivers in the last 10 years; no finishes higher than 25th.

While it’s true that a rising tide lifts all boats, it lifts them all evenly, which means each individual boat might only come up a little. That was what happened with the Rams’ receivers in 2017, when they had three top-40 receivers but no one better than 25th. Kupp led the way, but he only outgained Robert Woods by 48 yards and six receptions despite playing two more games.

Will it continue? Sammy Watkins is out and Brandin Cooks is in. Cooks has three straight 1,000-yard seasons, but with the Rams, he, Woods, and Kupp will likely have to be a three-headed monster. I’ll bet one finishes higher than 25th, but perhaps not much higher. This is going to be the type of passing offense where no one guy kills you.

Six No. 1 wide receivers in the last 14 years; one finish outside the top 20.

Even this chart understates things, as the Packers have had multiple top-20 receivers more than once since 2004. Still, the fact that the team almost never has repeat guys atop the receiver list says something. With Nelson (and of course, Jennings, Driver, and Walker) out the door, it falls to Adams and Cobb.

Will it continue? Probably! Adams finished as fantasy’s No. 13 receiver last year despite Brett Hundley serving as quarterback for a frustratingly long portion of the season; give Adams a full season of a healthy Aaron Rodgers and it’s hard to imagine he isn’t at least a top-20 option.

Three No. 1 tight ends in the last five years; no finish higher than 20th.

Other than Cleveland quarterbacks, no position more has to be included in a piece like this than Jets’ tight ends. This is a position group that has 94 receptions on 150 targets for 866 yards and 5 touchdowns, as a unit, the last three years combined. This is a group whose leading member had 357 yards and 3 touchdowns in 2017 and that was considered a big breakout. It’s like someone told the Jets it was unsporting to use the tight end as a receiver and they value sportsmanship above all else.

Will it continue? Austin Seferian-Jenkins headed for Jacksonville in free agency, meaning the Jets’ No. 1 tight end in 2018 is Clive Walford … or Chris Herndon … or Jordan Leggett. Yeah, it might continue.

When a team puts up bad totals at QB, RB, or WR, it’s generally a matter of bad play or injury luck. At tight end, though, it can be schematic, like the Jets above or the Cardinals here. Arizona hasn’t had much in the way of tight end success, but then it hasn’t really tried to, either.

Will it continue? Million-dollar question! Ricky Seals-Jones is one of the intriguing up-and-comers at tight end, and the TE-averse Bruce Arians heading into retirement could have been good news … except the Cardinals now have as offensive coordinator Mike McCoy, who has only had a tight end exceed 50 targets once in his career — 2013, when his quarterback (Peyton Manning) attempted 583 passes. Sorry, Seals-Jones, the trend is likely to continue.