What we can learn from target percentage for fantasy: AFC

That’s why I’m going team by team to look at target percentage to see what we can glean. The NFC was Monday, and below is the look at the AFC. This only hopes to look at situations that stand out in one way or another, so not every team will be mentioned below.

In case you weren’t sure the Bills needed to bring in a new crop of offensive weapons this offseason, they didn’t have a single player with 30-plus targets have even a 20% target percentage, and their leader in the stat was an abject disaster with the team and released in midseason. Cole Beasley and John Brown aren’t stars, but they should command plenty of targets as long as Josh Allen isn’t tucking-and-running. 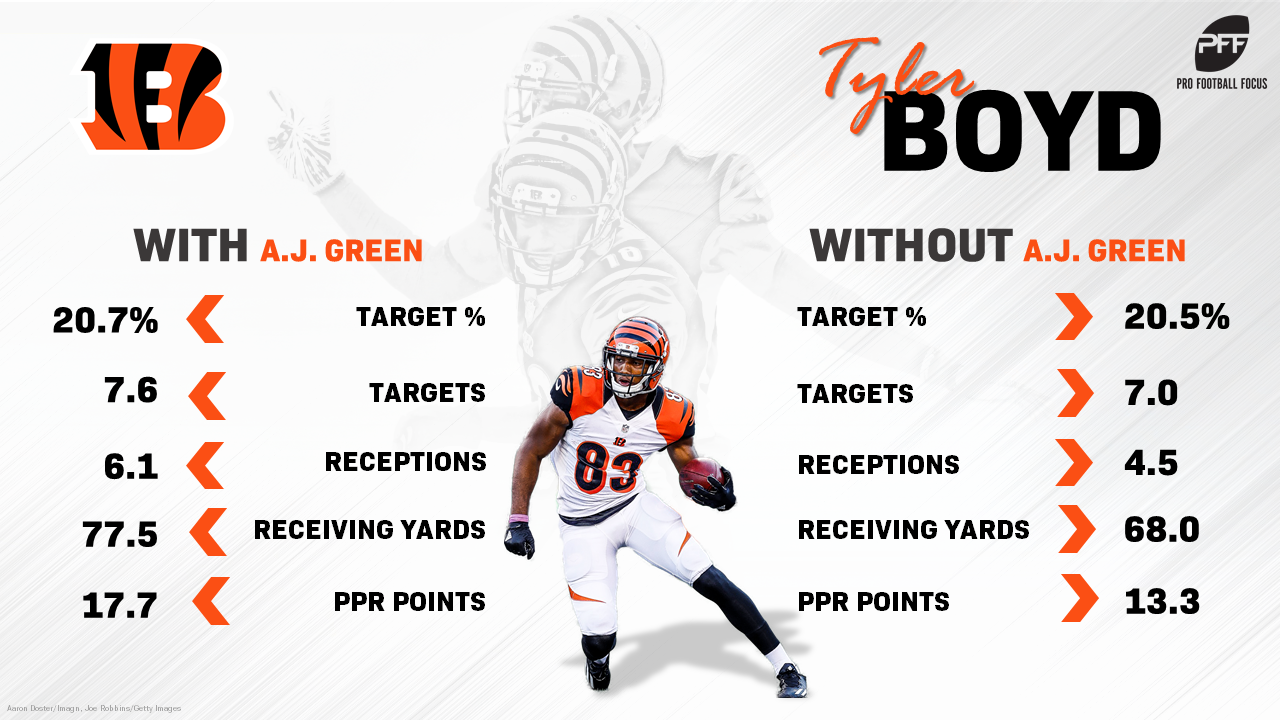 It would be tempting to say that Tyler Boyd’s percentage was low compared to A.J. Green, but it must have been higher after Green got hurt. Instead, the numbers were basically the same (20.7% with Green in Week 1-8, 20.5% in Weeks 9-17). But Boyd’s productivity dropped a fair amount when Green left the field, as did his PFF grade. He might be better suited to having Green on the field and being a very productive No. 2 than leading an offense.

If I’m the Browns, and can get him to be amenable to it, I’m keeping Duke Johnson as a third-down/insurance guy. But that looks unlikely, and if he lands somewhere that can really utilize him, I love his potential.

Case Keenum hardly looked at Courtland Sutton after Demaryius Thomas was traded and Emmanuel Sanders got hurt. I’ve explained before why I see Sutton as a deep sleeper with Joe Flacco at quarterback, but his lack of commanding much in the way of targets per route in 2018 is definitely a warning sign.

In games with Jack Doyle active in 2018, Eric Ebron had a 21.8% target percentage. Without Doyle, it rose to 25.1. Both numbers are good, but the rise indicates why Ebron carries some risk in 2019 if Doyle is back and healthy.

Grains of salt all over this one, because Leonard Fournette’s season was sporadic and limited and ultimately unexciting, but his target percentage definitely spiked in Year 2 — it was 18.3% as a rookie, then 26.0% in 2018. Even with his injury and suspension absences, Fournette ran more routes in 2018 than across all of 2017. T.J. Yeldon and Carlos Hyde are gone, replaced by the unexciting Alfred Blue and Benny Cunningham. Cunningham has plenty of receiving experience, but the door is wide open for Fournette to add more receiving work to his game, which — if he can stay healthy — would really boost his overall value if it happens.

Austin Ekeler might never be a No. 1, bell-cow back, but he’s carved out a perfect role as Melvin Gordon’s backup. As noted in my piece on next year’s free agency, Ekeler has a career 3.1 yards per carry in games he’s played 35-plus offensive snaps, 6.1 in games he’s played fewer. He’s destined to forever be an upside flex play, but a good one. 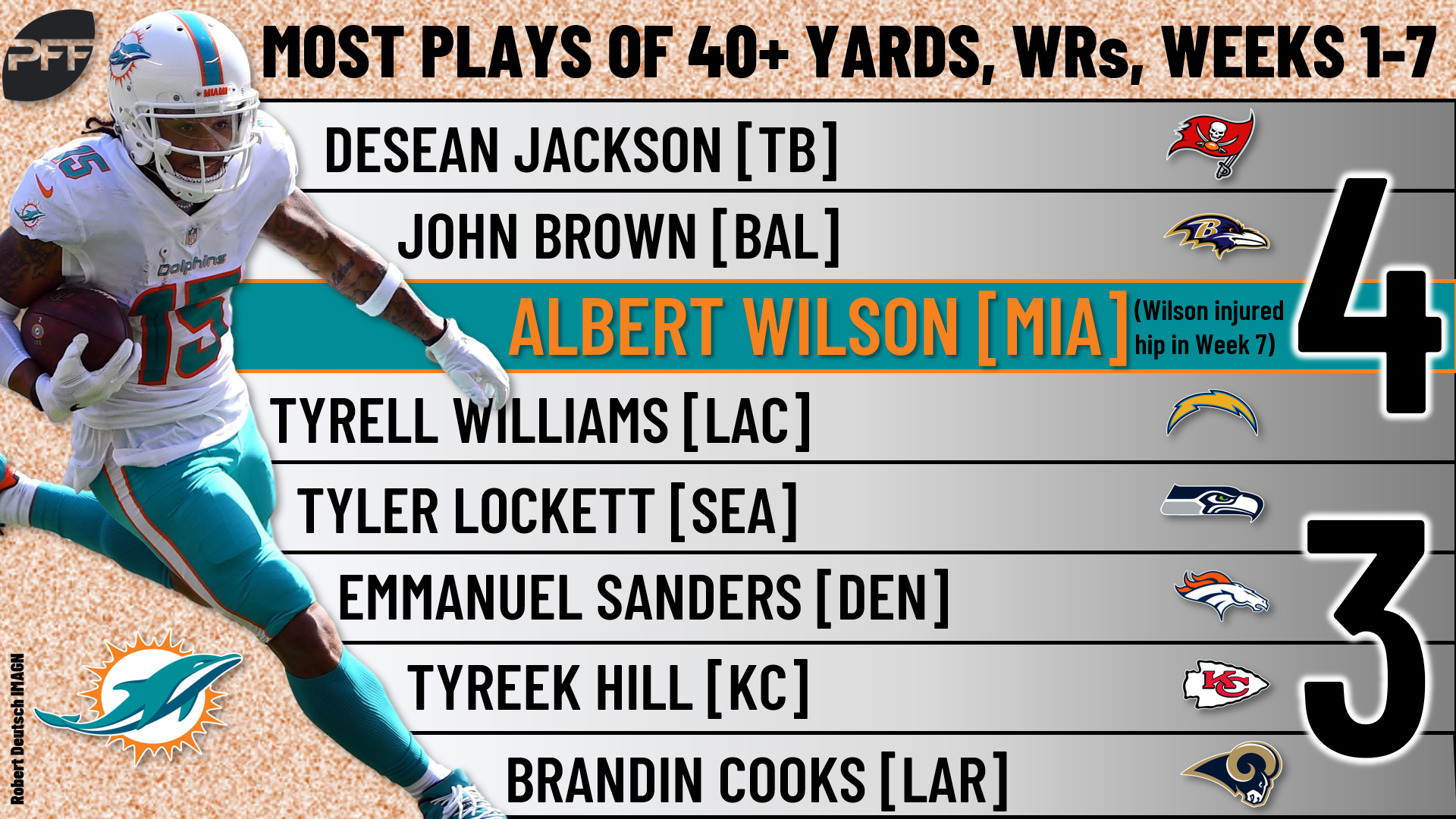 Albert Wilson’s raw fantasy numbers at the time of his injury (391 yards, 4 touchdowns, 96.7 PPR points, WR25) were fine, but artificially inflated by three different receptions of 40-plus yards (including two over 70) and a 52-yard touchdown pass. It’s hard to imagine you can count on that sort of deep-play ability repeating itself. What is more repeatable, though, is Wilson’s target percentage, as he dominated the team’s receivers in that number. If he proves to be healthy for 2019, Wilson will be right back to sleeper status.

The Jets haven’t been a team that heavily targets running backs in recent years. Trenton Cannon had only 26 targets, but his 25.7% target percentage was the highest for a back with at least that many targets in the PFF era. Raise the threshold, and the target percentages drop below 20. Le’Veon Bell could set new marks for the Jets in 2019.

Jalen Richard was the PPR RB29 in 2018 despite losing significant time to Marshawn Lynch and Doug Martin and despite only one touchdown in 123 touches. Lynch and Martin are (probably) gone, and only Isaiah Crowell has been brought in to replace them. Richard is currently being underdrafted, is my point.

At a minimum of 350 routes run (barely 20 a game), only one player was targeted less often than James Washington’s 9.5%, and that was Kansas City’s Chris Conley at 9.2. With Antonio Brown gone from the Steelers but Donte Moncrief in town, we’ll see what happens to Washington’s place in the circle of trust in 2019. He’s a deep sleeper at wide receiver, but he was also the lowest-graded wide receiver (49.4) of 116 qualifying in 2018, so he’ll have a lot to prove.