Note: Data is from Weeks 1-4, 2022. There are obviously plenty of limitations to this due to the small sample size at hand, so key discrepancies will be highlighted in the ensuing paragraphs and the metrics will get stronger as the season continues. 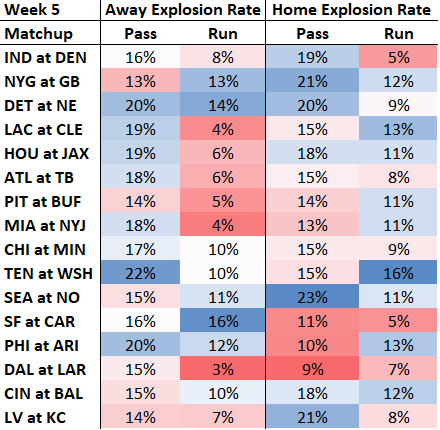 Through it all, Jared Goff has ripped off QB19, QB7, QB19 and QB2 finishes – good for the fifth-most fantasy points at the position this season. Last week’s performance was all the more impressive without Amon-Ra St. Brown (ankle), D.J. Chark (ankle) and D’Andre Swift‘s (knee, shoulder) services. This offense is objectively a fun time and should continue to put copious points on the board more weeks than not.

The potential concern is what happens if defenses start making Goff beat them deep. Through four weeks, he’s just six for 20 when throwing at least 20 yards downfield — good for bottom-three marks in yards per attempt (6.9) and adjusted completion rate (30%). A certain speedy rookie could certainly help matters in that department but either way, it’s been great to see Goff and company exceed even the most optimistic preseason expectations on the offensive side of the ball.

Reynolds is a volume-based WR3 play if the Lions’ receiver room remains a walking graveyard, although life won’t be easy in a potential shadow matchup against Jonathan Jones — PFF’s 14th-highest-graded cornerback in coverage grade.

A-aron has a new No. 1 wide receiver: Rookie WR Romeo Doubs leads the Packers in routes (107) and targets (24) over the past two weeks with presumed No. 1 option Allen Lazard back in the lineup. Of course, this is a small sample — and Doubs didn’t help his cause for more future opportunities by dropping a late-game 40-yard score in Week 4 — but I’d prioritize Doubs over Lazard for the remainder of the season.

That includes this week as well in a winnable potential shadow matchup against Adoree’ Jackson, who has allowed an 11-172-1 receiving line into his coverage this year and boasts a mediocre 59.8 PFF coverage grade. Doubs remains firmly in the WR3 conversation with the potential to continue soaring even higher.