The NFL is a matchup-driven league. Offensive coordinators are always looking to scheme their playmakers into one-on-one situations against a defender, while defensive coordinators will attempt to do anything in their power to upset the timing and rhythm of the opposing quarterback.

Note: Data is from 2021. There are plenty of limitations to this due to the current year being 2022; key discrepancies will be highlighted in the ensuing paragraphs and the metrics will get stronger as the season continues. 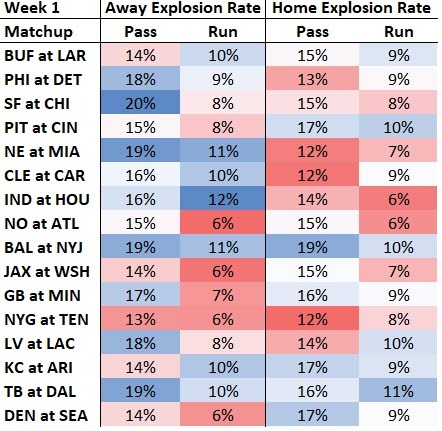 Believe in Trey Lance: Yes, Lance has a ways to go as a passer. Also yes, he ranked fourth in the NFL with an average of 8.5 yards per attempt last season, finishing just 0.1 yards behind Garoppolo himself. Obviously, Lance was working with a small sample size that included some blown-coverage-induced big plays, but that’s also life in an offense that has playmakers all over the place in Deebo Samuel, George Kittle and Brandon Aiyuk.

The first test is a Bears defense that will need to get adjusted to life without Khalil Mack in a hurry. The squad isn’t completely devoid of talent with DE Robert Quinn, LB Roquan Smith, CB Jaylon Johnson and FS Eddie Jackson all boasting plenty of accolades; just realize the 49ers (-6.5) are expected to see the sort of run-heavy leading game-script that *should* lead to all sorts of fantasy goodness from Lance throughout 2022.

Lance ($6,000 on DraftKings) is viable in cash games and tournaments alike; don’t feel like you need to stack him with anybody thanks to the immense rushing upside at hand.

GOATS stay GOATS: Part of what makes Tom Brady’s late-career greatness all the more impressive is the reality that he’s managed to keep a downfield mindset while getting rid of the ball quickly. Overall, Brady had the league’s third-quickest average release time (2.34) among 44 quarterbacks with at least 100 dropbacks, yet he still managed to post a more-than-respectable 8.4-yard average target depth (No. 15).

Fly like an eagle: New Eagles No. 1 WR A.J. Brown has the highest PFF WR/CB matchup advantage of the week ahead of his projected shadow date with Amani Oruwariye. While Oruwariye did a good job in shadow coverage on Tee Higgins (3-44-0) and Allen Robinson (4-32-0) last season, things didn’t go quite as well in two matchups against Justin Jefferson (7-124-0, 11-182-1). Obviously pretty understandable, but either way PFF’s 25th-ranked secondary constitutes a smashable matchup for AJB ($6,400 on DraftKings).

Offense is easier when the defense sucks: The only two defenses that allowed an explosive pass play on at least 10% of their opponent’s dropbacks happen to be squaring off in Week 1: The Jets (11.3%) and Ravens (11%) were easily the NFL’s worst two secondaries at limiting big plays last season.

Cheap target hog wide receivers in a good matchup, is that something that you might be interested in?: Both the Jets and Ravens have improved their defenses through personnel changes and generally better health. Still, both Rashod Bateman ($5,300 on DraftKings) and Elijah Moore ($5,100) stand out as viable pivots off of the rather chalky Michael Pittman ($5,500). Yes, I believe that Pittman should be projected for more points than either Bateman or Moore. Also yes, it’s one week; don’t be afraid to take the slight price discount — and mega ownership discounts — on two talented second-year receivers poised to see all sorts of volume.

Not every passing attack is meant to fly: The clear-cut bottom-five offenses in terms of expected failure in creating big plays through the air: Giants, Titans, Dolphins, Panthers and Lions.