In its most boiled-down form, DFS involves the process of identifying the highest-scoring players at each position in a given week. With close to 20 playable options at the quarterback and tight end positions, along with even more at the running back and wide receiver positions, it is a feat in itself to identify one position correctly. To finish at the top of a DFS contest, you must hit on basically all skill positions and circumvent the randomness associated with selecting defenses. Doing all of this while also fitting under the confines of a salary cap makes DFS one of the most difficult setups to beat consistently, especially in large-field tournaments.

There are plenty of documented processes that help guide people in the right direction when constructing their lineups. The most popular form is to take a stacking approach, which utilizes correlated positions to concentrate on upside when the right team or game stack is identified. This basically allows you to chain together events that are correlated when they occur to increase the ceiling or upside of your respective lineup. The main issue is you cannot correlate every single lineup spot together. At some point, you need to be able to identify value outside of the team or game stack you are targeting in order to round out your lineup.

This point in the lineup-building process typically involves identifying at least one or more pass-catchers outside of your team or game stack to incorporate into your lineup based on salary. Oftentimes, this should be a cheaper wide receiver option that allows you to fit in top-end running backs who are projected to get significant volume. This can often feel like a random guessing game — with decisions on this lineup spot coming down to salary, matchup or historical stats for how the player performed on the opportunity presented.

One of the most successful public approaches to this problem has been the application of the Air Yards Buy-Low Model by Josh Hermsmeyer, who utilized air yards and targets to help identify missed or overlooked opportunities for pass-catchers. This model relies heavily on air yards and targets that weigh volume and opportunity to highlight underperformers. The success of this approach is well-documented, leading to further exploration of what works and what doesn't.

Being first and foremost a data company, PFF has the ability to build and train models not only on public data, but also PFF specific data like receiving grade and pass routes run, among a litany of other variables. Utilizing specific variables, we can build a model tuned to predict performances where a pass-catcher scores more than 25 DraftKings or 20 FanDuel receiving fantasy points.

Things are less stable for Week 1, as the historical data is missing some relevant information related to changes at the team and player levels. This can still be helpful, but the model will become more accurate the further into the season we move. Let’s take a look at the model output for both the wide receiver and tight end positions for Week 1 before folding in context and commentary about the best plays to help finish off your DFS GPP lineups. 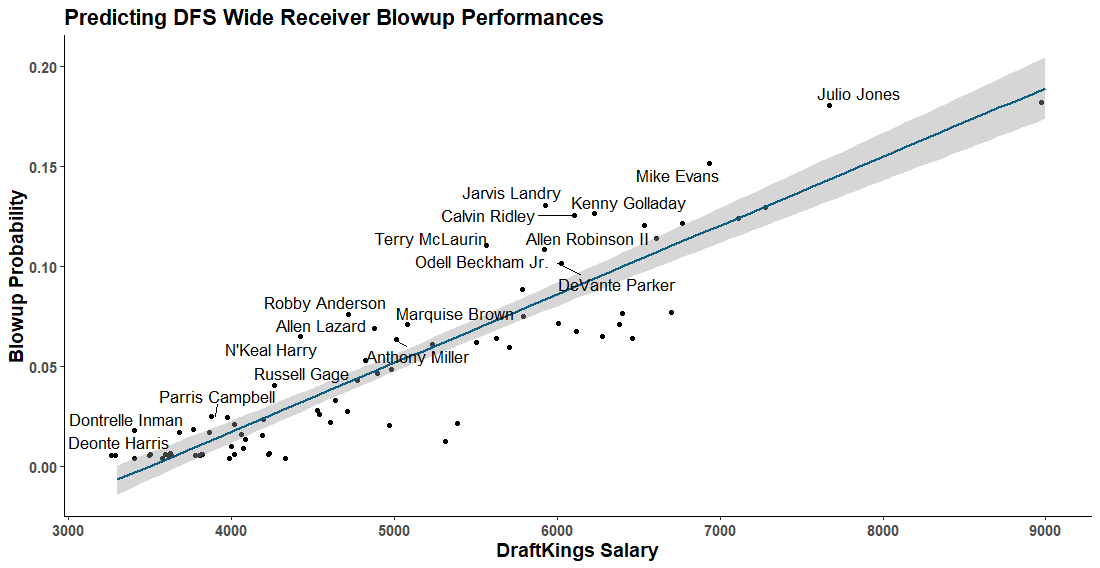 Jones is the highest-priced option on the list of wide receivers to blow up in Week 1 and is given over an 18% chance at hitting 30 DraftKings receiving points Sunday. His current ownership projection is 10%, and he is pegged to be the eight-most owned wide receiver. The expectation is that his teammate Calvin Ridley sees higher ownership in a more favorable matchup. Truthfully, we cannot be certain how Seattle will utilize Quinton Dunbar, but the expectation is he sees the majority — if not all — of his snaps at right cornerback.