Average depth of target is one of the better performance indicators that we have here at PFF. Unlike yards per reception, which can be misleading thanks to statistical outliers like long catch-and-run plays, aDOT provides a very predictable expectation for how far downfield we can expect a player to be targeted.

Historically, we’ve used aDOT at PFF to project receivers based on year-over-year trends in the NFL. The statistical significance of aDOT was first explored back in 2012. That was before PFF began charting college data, but we now have data on college players that goes back to the 2013 season. These numbers open up a whole new window of exploration. Specifically, how sticky is aDOT from the college level to the pro level?

Sample size is extremely important in statistics, and at this point we’re still dealing with a relatively small group of players. Yes, we have aDOT numbers for hundreds and hundreds of college wideouts from the last six seasons, but only a small chunk of them (roughly 30) have gone on to see more than 100 targets in the NFL.

However, out of this group, which includes names like Michael Thomas, Chris Godwin, Kenny Golladay, Tyler Boyd, and JuJu Smith-Schuster, regression analysis shows a correlation of 0.61. That isn’t linear, but it does show a strong correlation between college-level aDOT and what we see at the pro level. Among players with at least 100 targets in our data at both the college and pro levels, here are some names who stand out:

With some of these players, there’s a near-perfect correlation. Davis, Golladay, and Godwin are all but spot on with their college-level aDOT. However, you’ll also notice some fairly wide gaps for Adams, Thomas, Smith-Schuster, and Shepard. These players show that we can’t just blindly take a college aDOT and expect it to replicate in the NFL. Role, situation, and offense scheme also need to be considered.

Still, we can get an overall sense of who these players are by reviewing their aDOT numbers. Lower numbers typically mean players who excel in the short and intermediate areas of the field. Players like Kupp, Boyd, and Agholor profile as PPR-type options. Adams is an obvious outlier here, but going from Derek Carr at Fresno State to Aaron Rodgers in the NFL needs to be factored into his aDOT increase. We also see a big decline from Shepard. He was targeted much further downfield in the college level. Playing opposite Odell Beckham Jr. with Eli Manning under center are likely culprits in depressing his aDOT, but his college aDOT certainly suggests he capable of being much more than a possession slot receiver.

So let’s spin this information forward and take a look at this year’s incoming rookies. Here are the college aDOT numbers for the top 16 wideouts in my 2019 rookie fantasy football rankings:

This is by no means an exhaustive list, but this is the group with the greatest chance of success in the NFL. Interestingly, the group is bookended by two former Ohio State receivers in McLaurin and Campbell. And these two receivers are separated by a whopping 10 yards in target depth. It’s no shocker to see that McLaurin profiles as a deep threat, but some fantasy players may be surprised to see Campbell’s number. With such a short aDOT, Campbell profiles as a player who will get most of his damage done in the short and intermediate areas of the field. This runs contrary to the popular belief that his speed will make him a field-stretcher in the Colts offense. 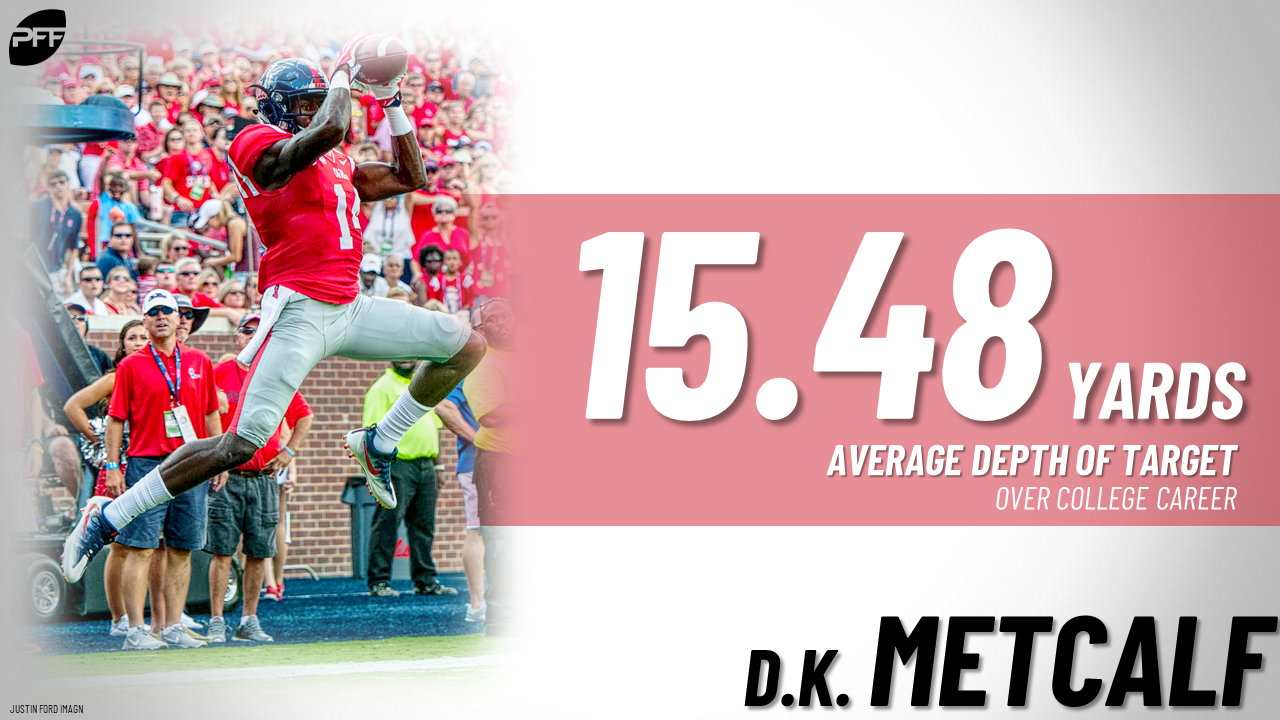 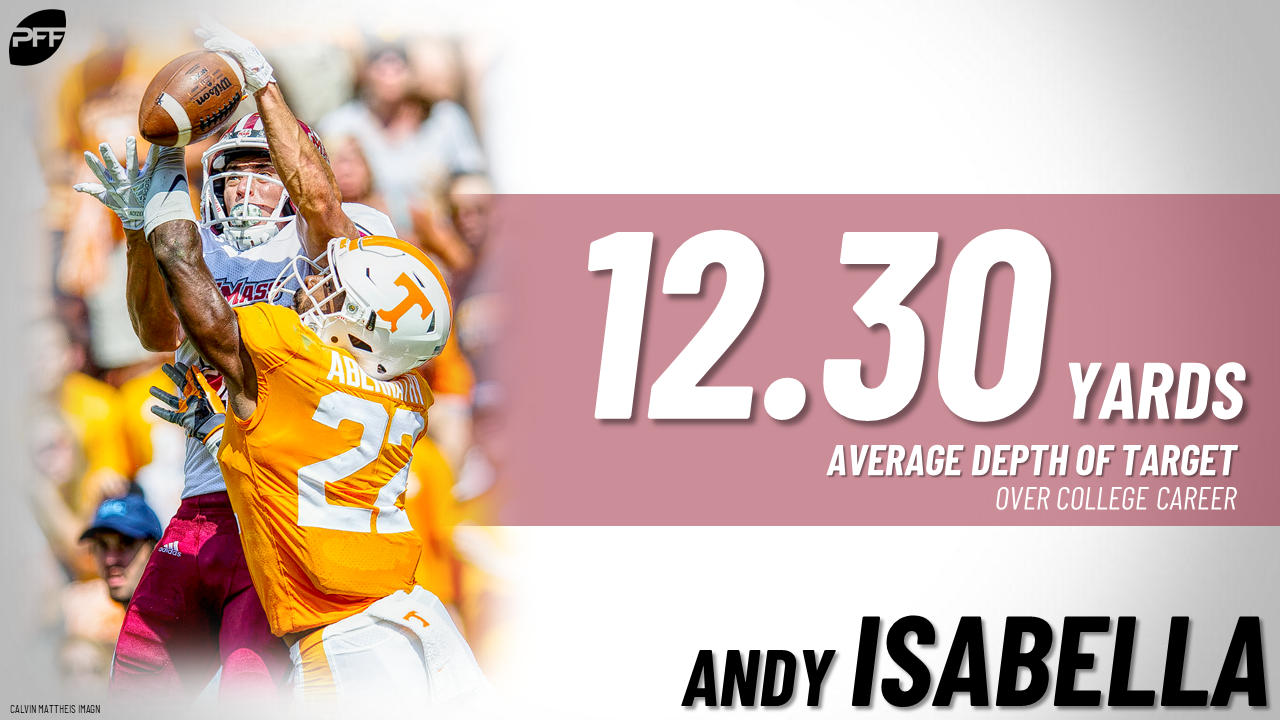 The Seahawks have two names on this list in Metcalf and Jennings. It’s no surprise that Metcalf was targeted heavily downfield at Ole Miss. His deep aDOT bodes well for big-play upside, but that profile also comes with volatility. The same thing can be said for Butler and Boykin. Butler’s new teammate, Isabella, has an intriguing aDOT. While he projects to play the slot in the long term for the Cards, Isabella has a unique ability to stretch the field and figures to see more than just your typical slot receiver work. Fantasy players should also note Johnson’s aDOT. That’s a relatively deep number, which suggests Johnson could fill some of Antonio Brown’s role in the offense. That’s not even close to saying he’ll be the next AB, but Johnson is being widely overlooked by the fantasy playing public. We may want to stop sleeping on him. 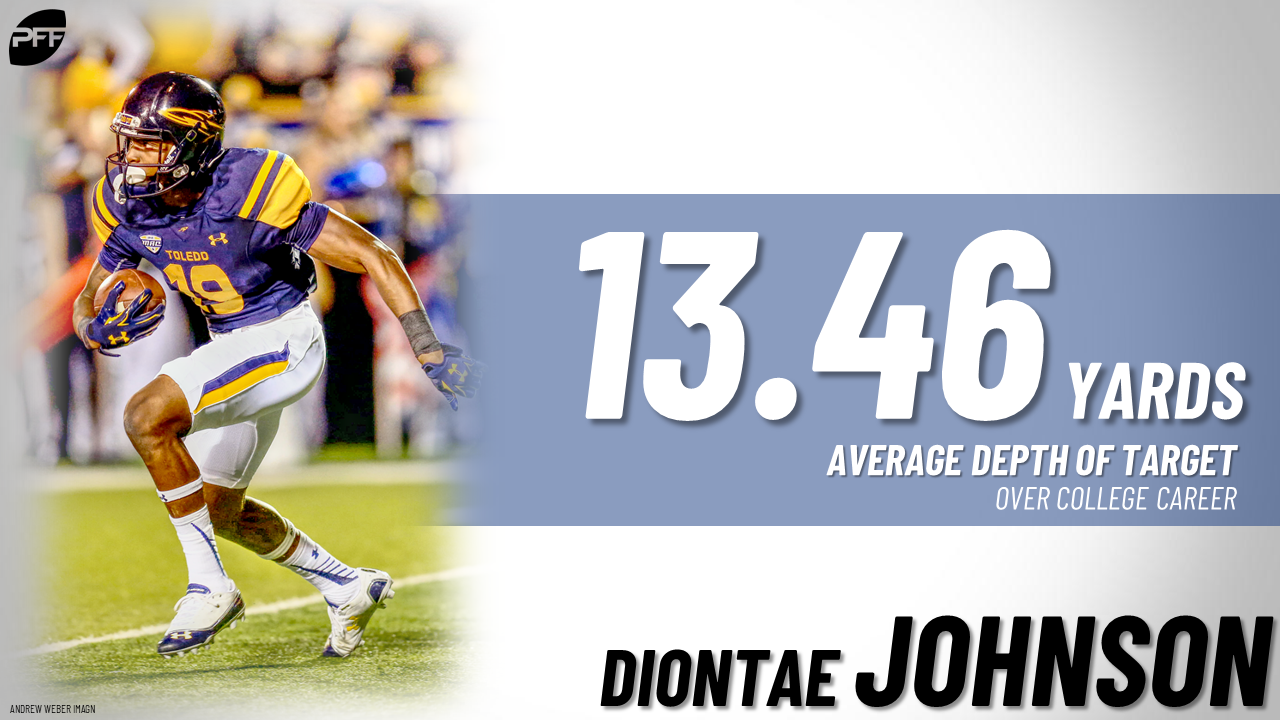 Like any performance evaluation, we should always be careful to not draw too many conclusions from one piece of data. However, recent trends have shown that aDOT does provide an intriguing glimpse into what to expect out of a receiver at the pro level. Keep this in mind when you target these receivers in your dynasty drafts.