Let the games begin. The conclusion of the NFL draft means it’s time to break down the 2019 dynasty fantasy football rookie rankings. With rookie drafts about to happen across the fantasy football landscape, you can get prepped to domination with our fantasy rankings for the top 101 players in this year’s class. 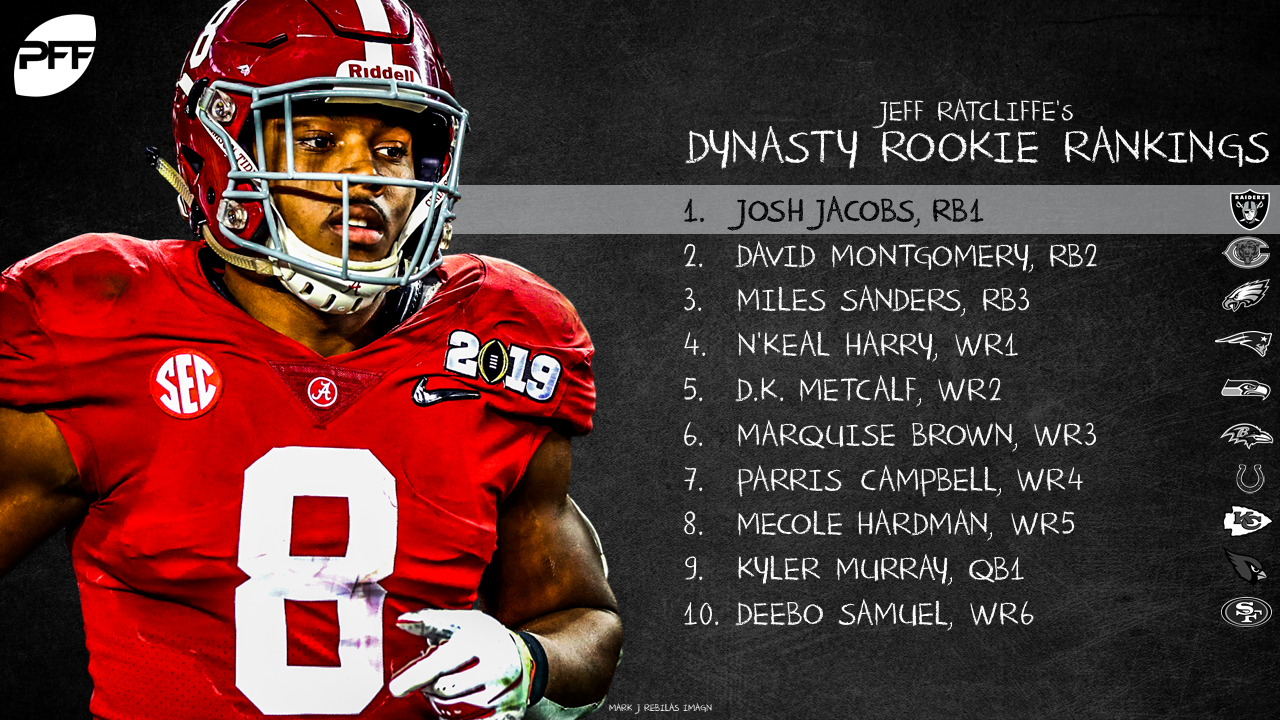 1. Josh Jacobs, RB1, OAK — He landed in a good spot with a clear path to feature-back work and should be the 1.01 in most rookie drafts.

3. Miles Sanders, RB3, PHI — Yes, Jordan Howard is in Philly, but Sanders is a better all-around player and has the skillset to excel under Doug Pederson.

4. N'Keal Harry, WR1, NE — We have to balance short- and long-term outlooks with Harry, as Tom Brady won’t play forever. But this is a favorable landing spot for a talented player.

5. D.K. Metcalf, WR2, SEA — If Doug Baldwin does in fact retire, Metcalf has the potential to be the top producer in 2019 among this year’s rookie wideouts.

6. Marquise Brown, WR3, BAL — “Hollywood’s” speed and dynamic ability are tough to ignore, even in a run-heavy offense.

7. Parris Campbell, WR4, IND — Campbell is a tick below Brown from a skill standpoint, but he lands in a much better location.

8. Mecole Hardman, WR5, KC — The ultimate wildcard in this year’s rookie drafts, Hardman has by far the widest gap between his long-term fantasy ceiling and floor.

9. Kyler Murray, QB1, ARZ — It’s been a while since we’ve seen a quarterback worthy of first-round consideration in rookie drafts, but Murray’s dual-threat ability has him set up for long-term fantasy success.

10. Deebo Samuel, WR6, SF — There’s plenty of opportunity on the 49ers depth chart for Samuel to step right in and produce.

12. A.J. Brown, WR8, TEN — This was far from the best landing spot for Brown, but his talent is enough to keep him in the back end of the first round of rookie drafts.

13. Hakeem Butler, WR8, ARZ — While Butler fell to Day 3, he landed in an excellent spot and could prove to be a nice value in dynasty leagues. 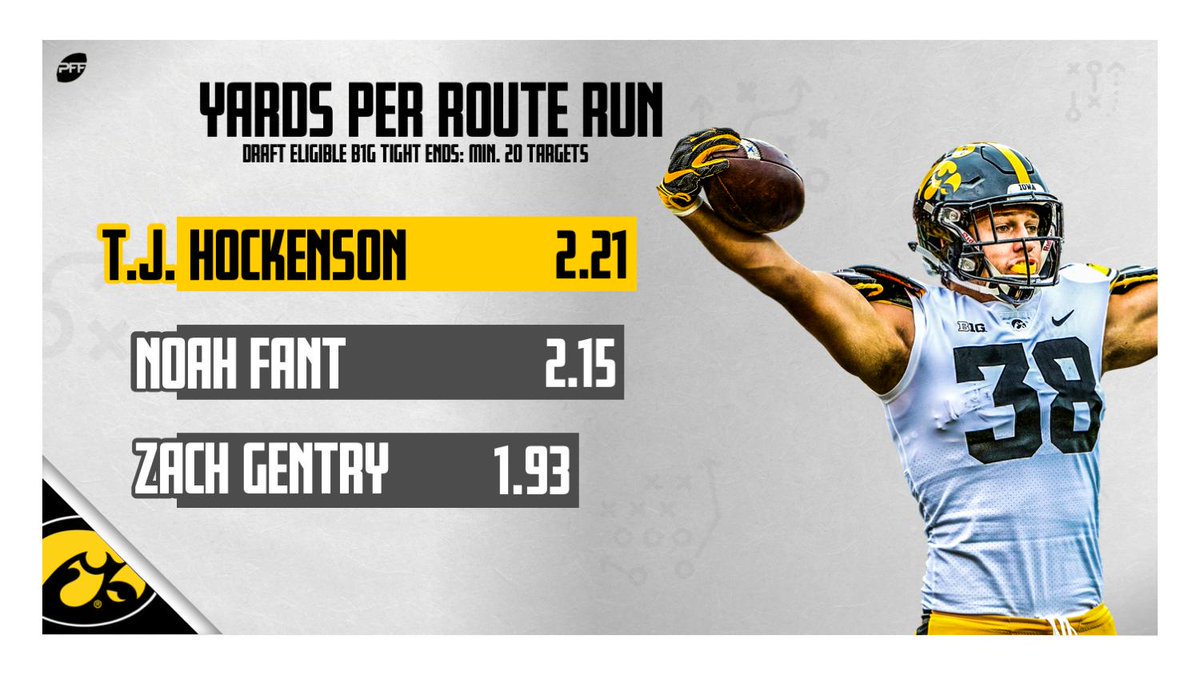 14. T.J. Hockenson, TE1, DET — Don’t overvalue rookie tight ends. Hockenson has a long-term elite ceiling, but it will almost certainly take him some time to get there.

15. Devin Singletary, RB5, BUF — While he tested poorly in the pre-draft process, Singletary is positioned to be the Bills’ future lead back.

16. Diontae Johnson, WR9, PIT — He was a bit of a surprise pick, but Johnson’s route running ability and opportunity in Pittsburgh have bumped him up the board.

18. Andy Isabella, WR10, ARZ — His unique skillset will make Isabella a fantasy asset, but Butler is the preferred rookie Cards receiver this year.

20. Justice Hill, RB6, BAL — He’s extremely athletic and positioned well to slide right in as the passing down complementary piece in the Ravens’ backfield. 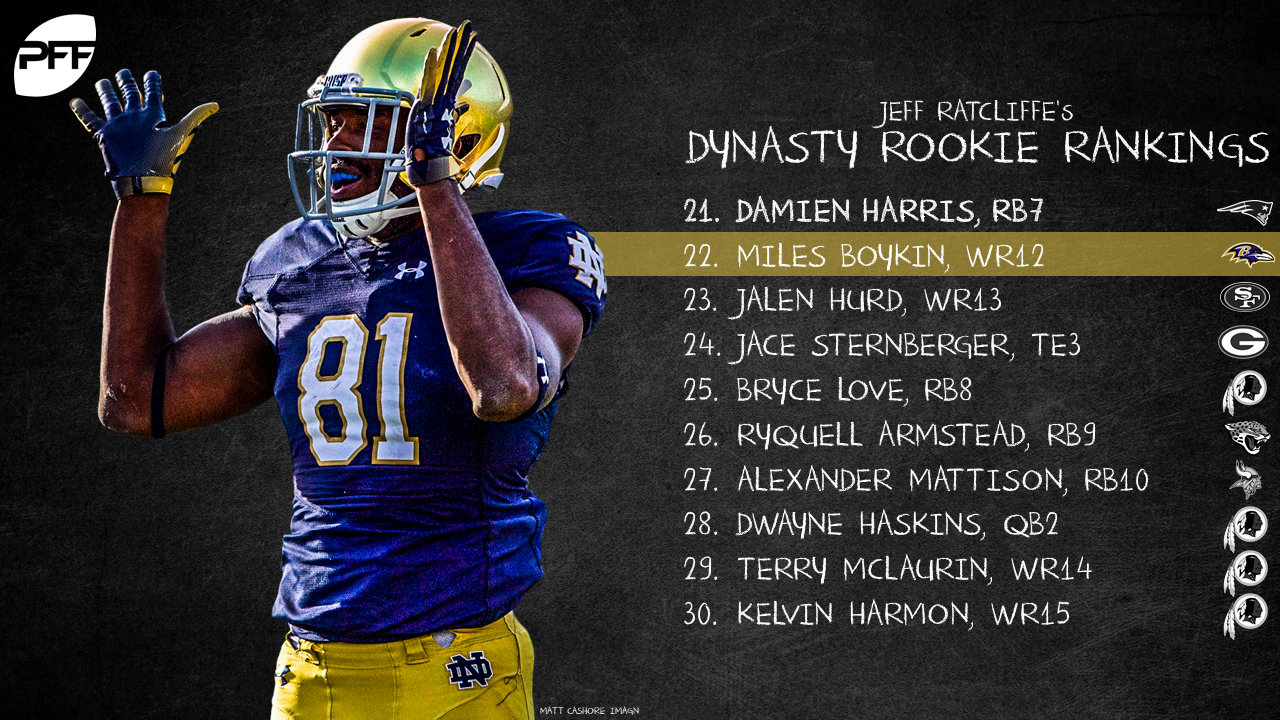 21. Damien Harris, RB7, NE — This was a brutal landing spot for Harris, as he joins a crowded house and presents a somewhat redundant skillset to Sony Michel.

22. Miles Boykin, WR12, BAL — He tested off the charts at the combine and gives Lamar Jackson major upside at wide receiver.

24. Jace Sternberger, TE3, GB — Jimmy Graham’s long-term replacement isn’t likely to do much in 2019, but his dynasty outlook is positive in Green Bay.

26. Ryquell Armstead, RB9, JAX — Armstead slides right in as Leonard Fournette’s handcuff, which means he could be a fantasy relevant name as early as this season if Fournette’s injury woes continue.

27. Alexander Mattison, RB10, MIN — Like Armstead, Mattison is an immediate handcuff in a prime landing spot if anything happens to Dalvin Cook. 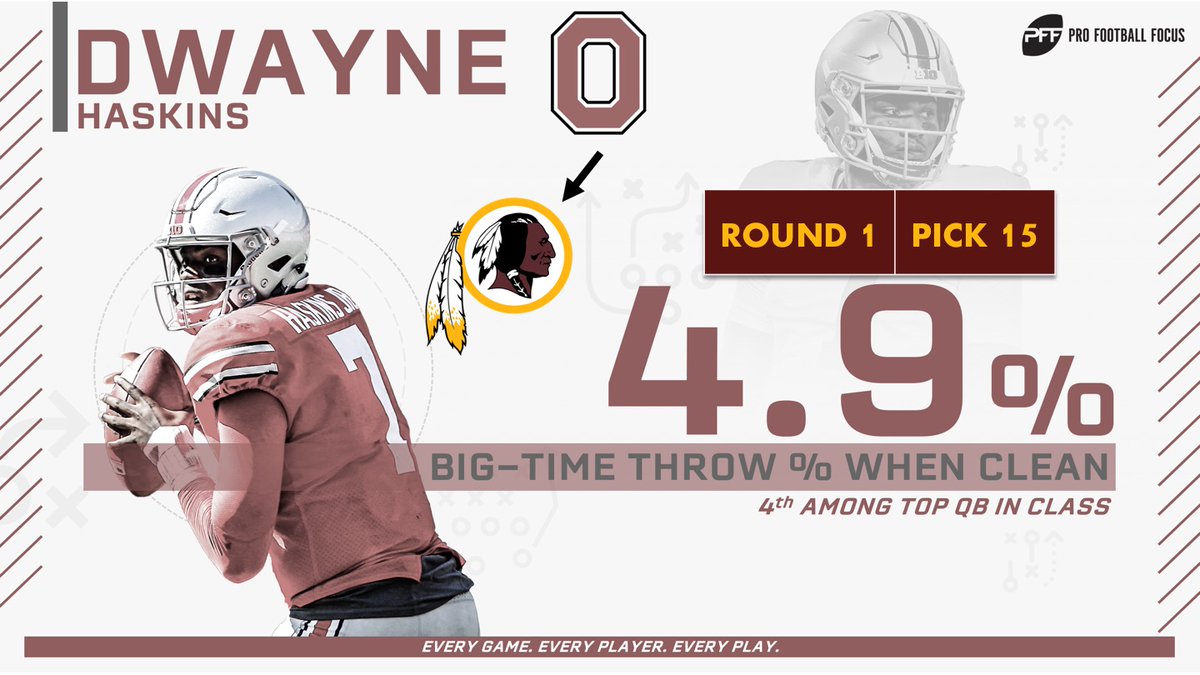 28. Dwayne Haskins, QB2, WAS — While Haskins is a good bet to start at some point in 2019, he isn’t worth spending anything more than a third-round rookie pick on.

29. Terry McLaurin, WR14, WAS — Haskins college teammate gives the Redskins a speedy downfield threat who has good chemistry with Haskins.

30. Kelvin Harmon, WR15, WAS — Harmon doesn’t have McLaurin’s speed, but he enters the NFL with a short and intermediate game that’s set up for solid PPR production.

33. Darwin Thompson, RB12, KC — Thompson is a dynamic playmaker who landed in one of the league’s most dynamic offenses. Don’t overlook him in dynasty leagues.

38. Drew Lock, QB3, DEN — It’s really a toss-up between Lock and Jones, but neither player is worthy of consideration before the fourth round of rookie drafts.

50. Emanuel Hall, WR20, CHI — While he isn’t a polished route-runner, Hall can fly downfield and offers some deep big-play upside. 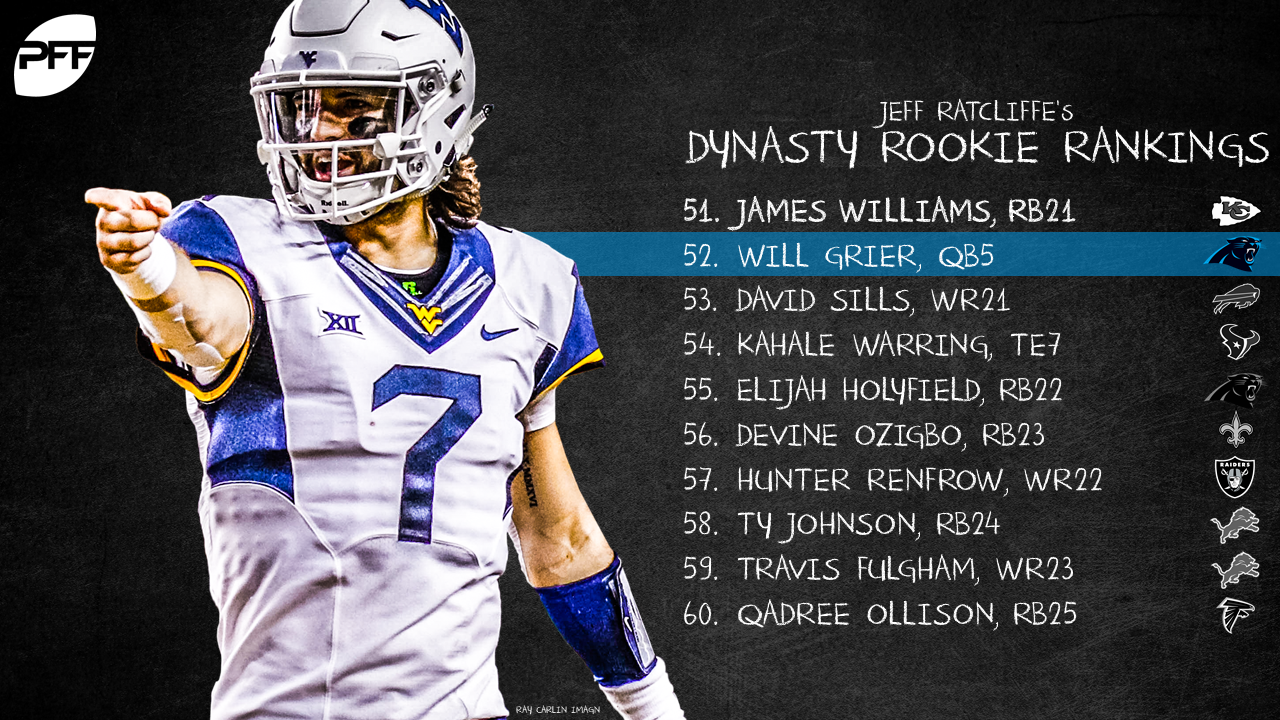 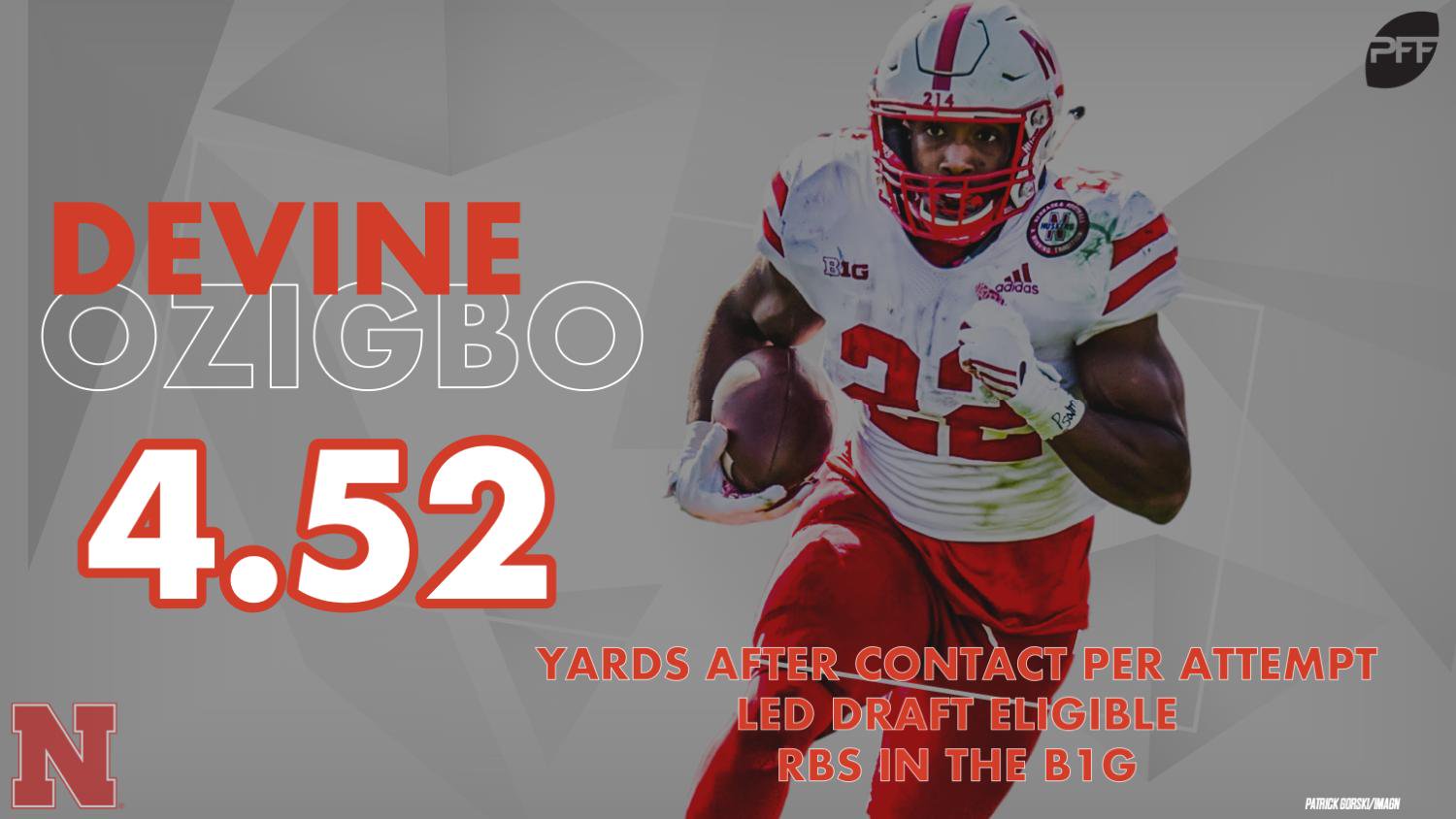 56. Devine Ozigbo, RB23, NO — The former Nebraska back didn’t get drafted, but he is worth a look in the late rounds of your rookie drafts. 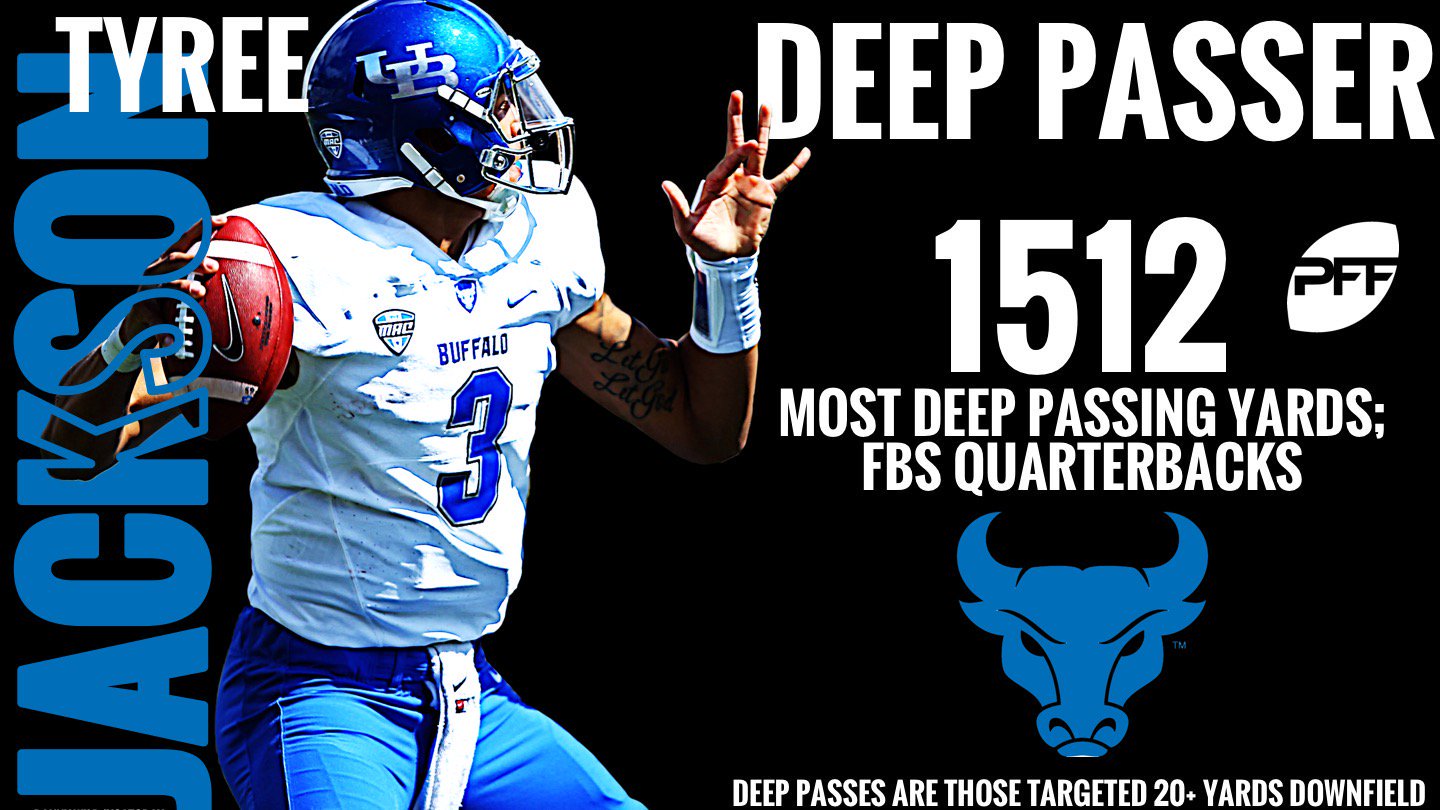 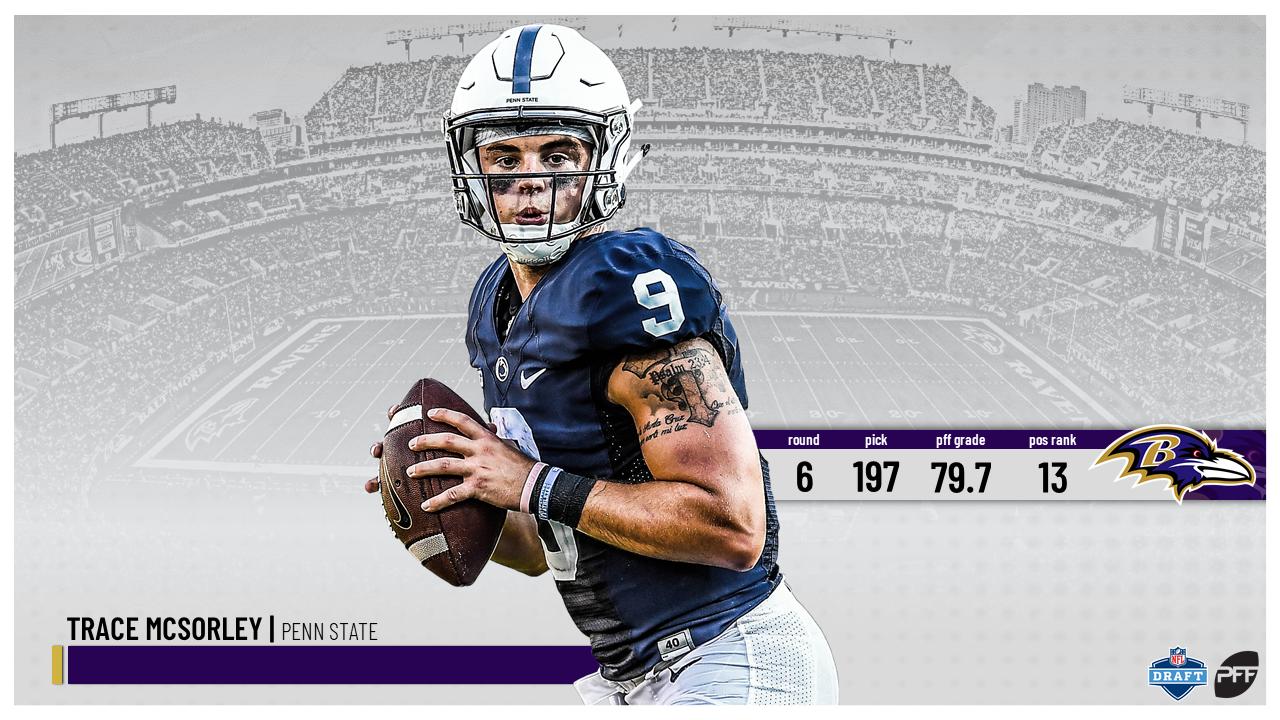