We’re only one week into the new season, but it’s never too late to start improving your fantasy football squad. In addition to scooping some of this week’s hot names off the waiver wire, you might also be in trade talks. Buying low and selling high can go a long way in fantasy.

Our weekly trade value chart aims to help you do just that. Each week, we offer you trade values for all relevant players for standard and PPR leagues. 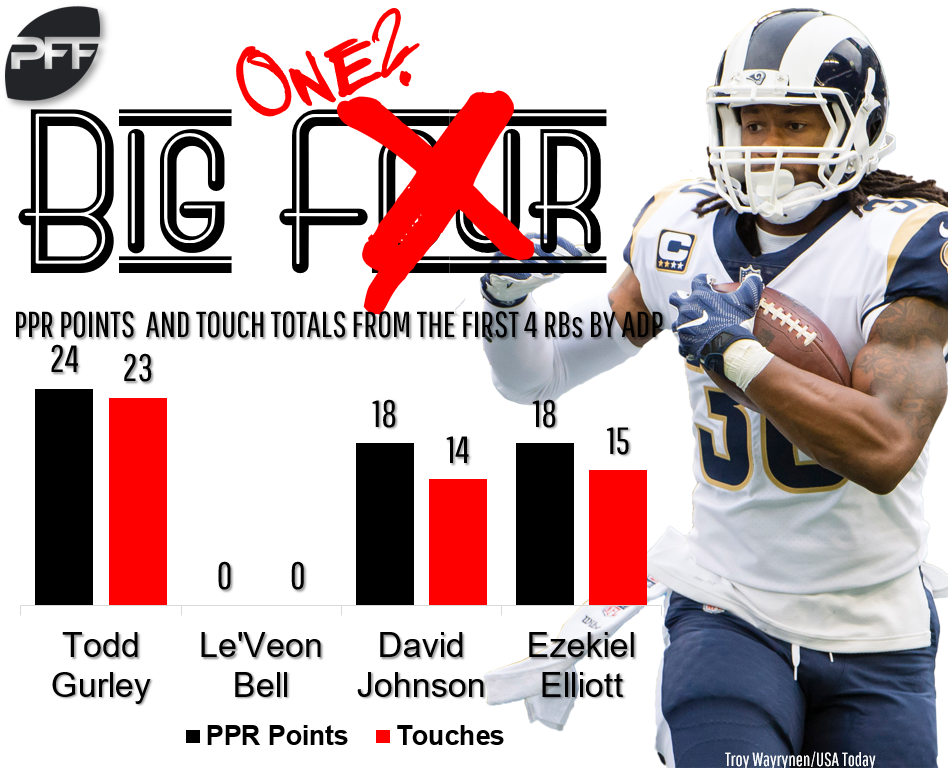 Todd Gurley takes the top spot on the Week 2 trade value chart. Gurley cruised to 108 rushing yards and added 38 yards and a score through the air in Week 1. His case for the top spot was aided by Le’Veon Bell’s holdout, David Johnson’s misuse (just 14 touches), and Ezekiel Elliott’s bad team (just eight points).

This week’s biggest riser — in both PPR and standard — was Corey Davis. Davis saw an elite 13 targets last week (sixth among all receivers) and his season-long outlook improved because of Delanie Walker’s unfortunate injury. All other Titans receivers combined had four targets.

Derrick Henry and Royce Freeman were both fallers at the running back position. Henry saw 10 rushing attempts to Dion Lewis’ 16, while Lewis out-targeted Henry 8-to-1 as well. Freeman was the only Denver running back to not receive a target last week, and he evenly split rushing duties with Phillip Lindsay.

Both Henry and Freeman are buy-low candidates: Henry had a long rushing touchdown called back because of a penalty, and Freeman should be the lead back (albeit still in a committee) within a month.