The haves and have-nots among fantasy tight ends

In the 1920s, Lou Gehrig and (especially) Babe Ruth stood above the rest of Major League Baseball in home runs. For example, in 1927, they finished 1-2 in the league with 60 and 47, respectively, while nobody else hit more than 30. Almost a decade earlier, Ruth famously hit more home runs in some seasons than entire teams managed.

So when looking at the top power hitters of the 1920s, it’s not really fair to say “Well, he didn’t hit nearly as many home runs as Ruth.” No one did, and no one came close. He redefined the skill. Better to set Ruth aside and wonder between, say, Rogers Hornsby and Jimmie Foxx and Bob Meusel without even considering that one guy hanging out so far ahead of the field. 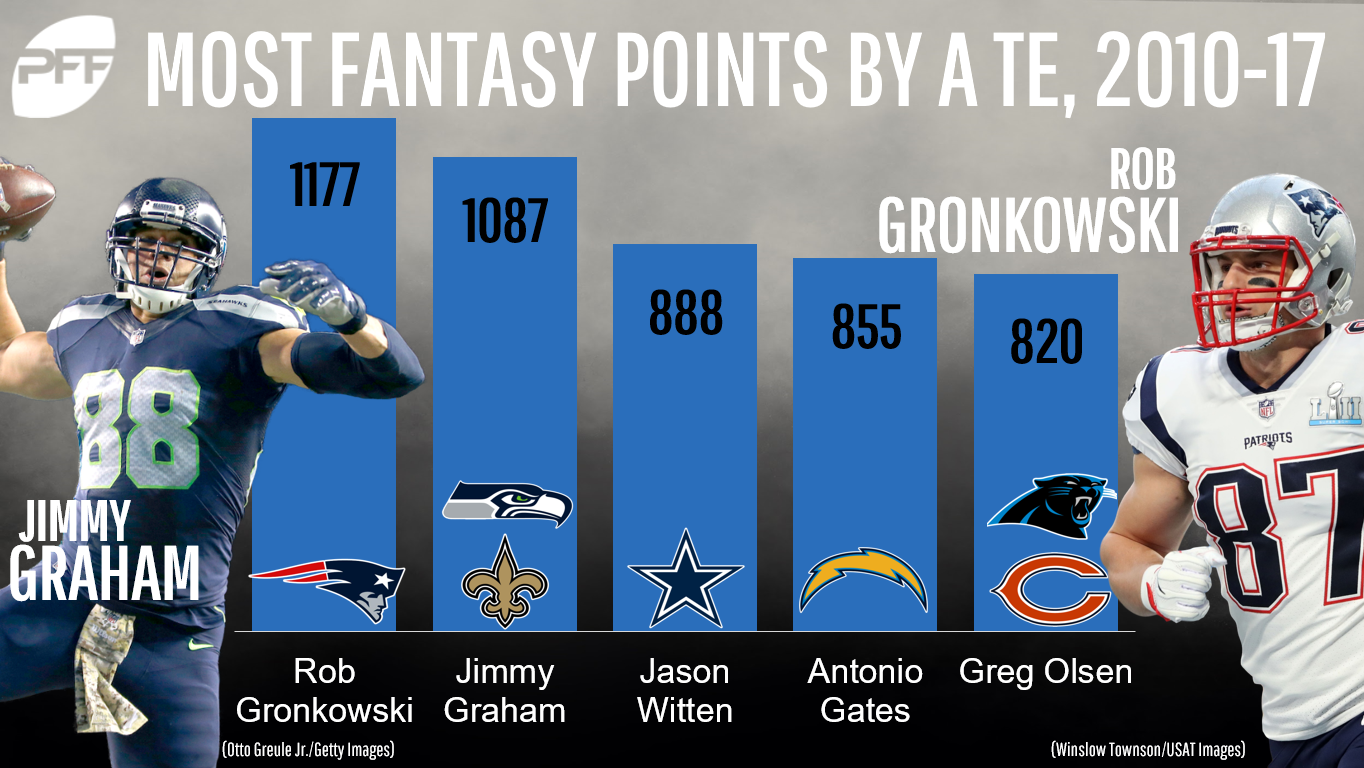 The upshot of this is that there was a tight end renaissance in the last decade or so — from 2010 to 2015, the top 12 fantasy tight ends averaged 126 fantasy points a season, which the top 12 have never averaged outside of that window. Only … the difference was almost entirely Graham and Gronkowski. Take them out of the mix, and the top 12 average is 115, roughly right in line with the years leading up to that point.

When tight end production fell off in a big way in 2016, people bemoaned the state of the position. The reality, though, was that an injured Gronkowski and a post-prime Graham accounted for essentially all the difference — take Gronkowski and Graham out of the mix, and the top tight ends averaged roughly the same as 2014, 2012, 2010, and not that far off the peak years.

But then 2017 happened. With Gronkowski and Graham removed from the equation, the top 12 fantasy tight ends averaged 99 fantasy points in 2017, easily the worst since those two joined the league. Here’s where each spot in the rankings sits in the eight-year sample (i.e., the No. 1 first-place finish, No. 5 seventh-place finish, etc.):

Kelce is shaping himself up to be a quasi-Gronkowski as his career progresses, but other than him, and this was the worst year for fantasy-relevant tight ends we’ve seen in as far back as we have PFF data (2007).

What does it mean for 2018? Well, with Gronkowski looking like the retirement murmurs weren’t for real, his reign at or near the top of the tight ends should continue. And while Graham put up a career-worst 54.1 PFF grade and had his lowest yardage total since his rookie year, he’s now paired up with the best quarterback of his generation in Aaron Rodgers, perhaps lengthening his stay as a top-tier tight end.

But, just as Bob Meusel might have been a power hitter but certainly wasn't Babe Ruth, there's a big dropoff. After those two, Kelce, maybe Zach Ertz/Evan Engram, we’re in a sad state of affairs at the tight end position. Delanie Walker’s 103 standard fantasy points in 2017 were a relative triumph for the position, but over the last decade, that’s more like back-end starter material at best. The tight end position, more than any other these days, is being split upon class lines, and if you don’t get in on the top tier, better to wait forever to draft one. That’s been the case for years now, but it’s ever more the case now.