Fantasy football owners draft players from specific NFL franchises more frequently than from others based upon a notion of how good each team’s offense will be. Basic logic tells you that teams with a good offense will have more good fantasy players. And of course, that is usually the case.

While it is unknown how each franchise will look this year, for most, the relative success of the 2018 unit is an indicator of success this coming season. With that in mind, here is how the 2019 ADP of offensive players, sorted by team, compares to the 2018 offensive grades for each team.

(ADP information from Fantasy Football Calculator as of Aug. 19.) 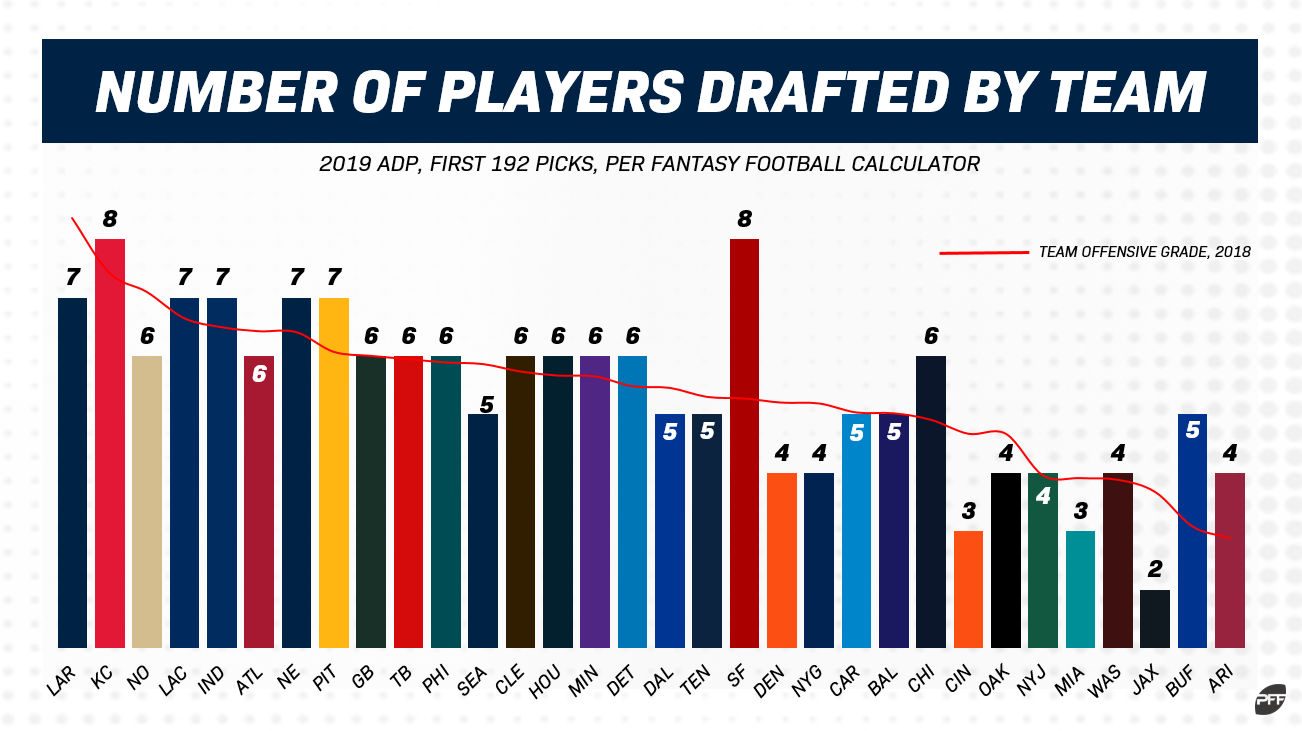 For the most part, fantasy owners have been drafting more players from teams with higher 2018 offensive grades and vice versa. That said, there are a few notable outliers.

The most obvious comes with the 49ers where, on average, eight offensive players have an ADP falling within the first 16 rounds:

The 49ers offense is set to enter the regular season with many questions surrounding it, and it appears that uncertainty has carried on to fantasy drafters. With four pass-catchers drafted from an offense that finished 15th overall in total passing yards and 17th in passing TDs last year, the drafting community is putting a lot of faith into Garoppolo, who just returned from tearing his ACL last September. Perhaps more startling is the attention given to a backfield that combined for only six rushing touchdowns last season, albeit before the addition of Coleman this offseason.

While Kittle, Coleman, Pettis, and Breida are must-drafts in most formats, Garoppolo, Samuel, Goodwin, and McKinnon all come with a somewhat high risk that you should consider before drafting any of them. Garoppolo and Samuel both have unproven track records but offer reasonable upside that warrants a late-round dart throw that could return surprising results. Goodwin and McKinnon, on the other hand, are both established NFL veterans with less-than-impressive fantasy résumés and can be passed on draft day.

Buffalo players have been a hot commodity among the fantasy community so far this draft season. The following players all have an ADP within the first 16 rounds:

After finishing the 2018 season with the second-lowest-graded offense, the drafting community has been bullish on the Bills so far this draft season. The uncertainty regarding the Buffalo running backs has both McCoy and Singletary being drafted just six picks apart, but not until the end of the eighth round. After finishing 2018 as the overall QB1 overall the last six weeks, Allen’s ADP has him as the 22nd QB off of the board. Brown and Beasley, both new faces to Buffalo, are being drafted, while Zay Jones and Robert Foster are being passed over.

For as long as McCoy has been in the NFL, he has been a staple on fantasy cheat sheets, but his tenure there may be coming to an end. Both he and Singletary are draftable, but the rookie offers more upside, which is what you want out of a mid-round pick. Allen seems to be slightly undervalued, as at worst, he will make an excellent backup, and at best, he could be spot started as a QB1 in good matchups. As for the receiving corps, it is hard to envision a world where a championship fantasy team has Brown or Beasley rostered.

One offense that is flying under the radar that of the Jaguars, who have just these two offensive players with an ADP falling in the first 16 rounds:

Understandably, fantasy owners are avoiding the Jaguars after they finished the 2018 season as the 30th-graded offense. With a new quarterback in town and questions surrounding almost every positional group on offense, even the most qualified fantasy analysts are unsure of what to expect from this group. After a promising rookie debut, Fournette’s sophomore season was plagued by injury, resulting in a severe lack of trust from the general fantasy population. Westbrook, who is also entering his third season, showed signs of growth in 2018 and fantasy owners who draft him hope to see that trend continue through 2019.

On the flip side, this roster has fantasy potential, particularly D.J. Chark Jr. and Marqise Lee. Both receivers come with a reasonably significant risk, but the upside that could come from drafting one of these guys is genuine. Chark, who is entering his second season, could open the season as a starter and present an ideal red-zone target for Nick Foles, who found great success with a similarly big-bodied Alshon Jeffery down the stretch of his 2018 playoff run that resulted in a Super Bowl win. Lee was establishing himself as the go-to man in Jacksonville before tearing his ACL last year and should see his fair share of targets this season as well. In an offense lacking a notable pass-catching tight end, it would not be too surprising to find Westbrook, Chark, and Lee all contributing to fantasy rosters come playoffs.

Another offense that fantasy owners have been avoiding is the Bengals, where just the following three players are being drafted:

After showing plenty of growth in year two, Mixon is a hot commodity in the fantasy community, and rightfully so. The 23-year-old is one of the most promising young running backs in the game and is one of the only three-down backs left. Green, after having a rough go of things in last year and getting hurt in training camp, is being drafted lower than he has been since his rookie season and it is no coincidence to see the receiver across from him, Boyd, with an ADP of 54.6 after bursting onto the scene in 2018.

One name that is notably missing from this list is Bengals QB Andy Dalton. While no one is confusing him with Patrick Mahomes, Dalton has been a reliable QB2 since entering the league in 2012 and that should remain true this season.

Another player whose ADP is suffering thanks to a lackluster 2018 season is Giovani Bernard. Sure, Mixon lowers the ceiling for Bernard, but until the Bengals stop playing catchup on the scoreboard more often than not, Bernard — who has caught over 35 passes in six straight seasons — needs to be drafted.