Of Sunday’s top 12 fantasy QBs, five were widely available as streaming options, and three of those were featured here. With 24 byes scheduled over the next five weeks, demand is about to catch up with the supply of widely available quarterbacks.

Idle this week are Aaron Rodgers, Ben Roethlisberger, Russell Wilson, and Derek Carr. Rookie Josh Allen is dealing with an injury to his throwing elbow that forced him out of Sunday’s loss and may keep him sidelined for Week 7.

Notes: Picking up where he left off last year, Winston was dominant in his 2018 starting debut. … Trubisky also turned in an elite performance, his second in a row. … Bortles turned in the opposite of the sort of performance we’ve come to expect when it comes to actual performance versus fantasy performance, as he was our No. 8 passer on Sunday but outside the top-20 fantasy QBs. … He may not be the trendiest pick, but Keenum has been a serviceable streaming option in half of his starts as a Bronco.

Below are the most attractive options for QB streaming for Week 7 who are either widely available, on your bench, or priced cheap in daily formats

This time last week, Winston was owned in 12.5% of ESPN leagues and was being started in less than half. The top fantasy QB over the final five games of 2017, Winston is locked in as a QB1, particularly this week with a healthy implied total of 26 points, according to Las Vegas oddsmakers. But until his ownership numbers reflect that, I’m going to take one more opportunity to endorse him as a streaming option. Week 6 was a typical hot-and-cold Winston performance underneath the box score, with several ill-advised throws including a dropped interception.

However, Winston was surgical at the intermediate level (10-19 yards) against Atlanta, completing 14-of-18 passes. He was also pressured on 28.3% of his dropbacks, posting a 116.9 QB rating. Winston is at his best when he’s able to process his reads and make quick decisions. He has a 135.3 passer rating when getting the ball out in less than 2.5 seconds (30 dropbacks), compared to an 85.6 rating when taking longer (38 dropbacks).

Whereas last week’s matchup for Dalton was an always-physical division rivalry, this week the Bengals have an implied total of 26 points against Kansas City, with the game total at an NCAA-like 58.5. The Chiefs own PFF’s third-worst coverage grade and have yielded the fifth-most fantasy points to opposing quarterbacks this season.

Dalton has been a fringe fantasy QB1 in terms of actual fantasy scoring (13th) and fantasy points per dropback (13th). His average of 2.15 seconds to throw this past weekend was the league’s quickest release. When getting rid of the ball in less than 2.5 seconds against Pittsburgh (34 dropbacks), Dalton posted a 106.8 passer rating, compared to a 42.4 rating when taking longer than 2.5 seconds to throw (11 dropbacks). A lot of that has to do with movable chess piece Tyler Boyd, who is on pace for a 99/1,213/11 slash line.

His days as a widely available streaming option will soon be over, but for now, Trubisky is effectively a free square in almost 70% of leagues. After playing in 100-plus-degree field temperatures in Miami on Sunday, the Bears return home to face a New England defense that owns our sixth-worst pass-rush grade. That’s particularly important because Trubisky boasts a 113.4 passer rating when kept clean this season, compared to a 65.4 rating against pressure. 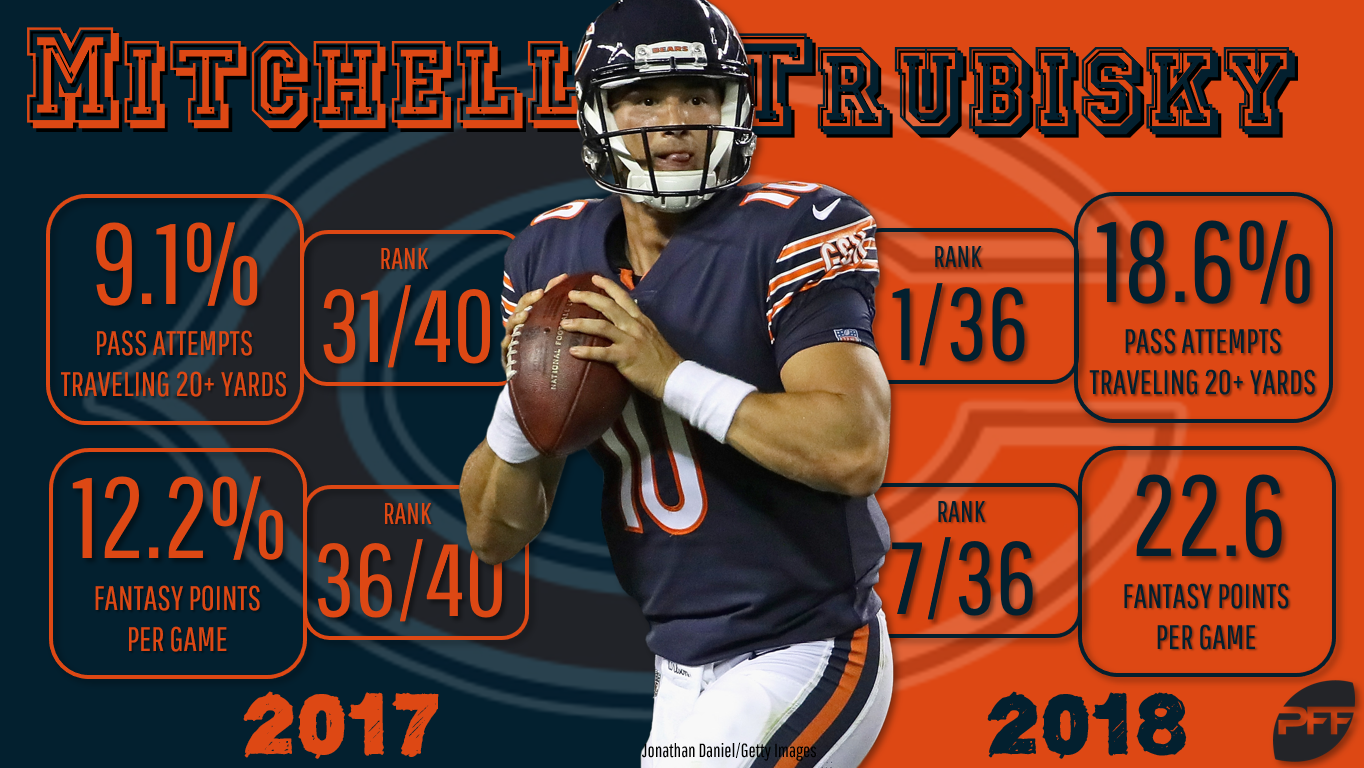 We really don’t need to dig that deep, though. Trubisky is a top-four fantasy QB over the last three weeks despite playing only two games. No quarterback has attempted a higher percentage of deep targets (18.6%) than Trubisky this season. Not only is Trubisky taking those shots, he’s also connecting at a high rate. He completed 4-of-7 deep attempts for 151 yards and a score against Miami. Over his last two outings, Trubisky is 11-of-15 on deep throws for 369 yards, four TDs and zero INTs, good for a 154.9 passer rating.

Mayfield insists his ankle was not to blame for his up-and-down play, although he did look rather unsettled in the pocket. Nevertheless, he gets a cushy spot to rebound Sunday against Tampa Bay. The Buccaneers have allowed the most fantasy points to opposing passers, as they’ve been ineffective in both the pass rush (third-worst PFF grade) and backend coverage (sixth-worst grade). 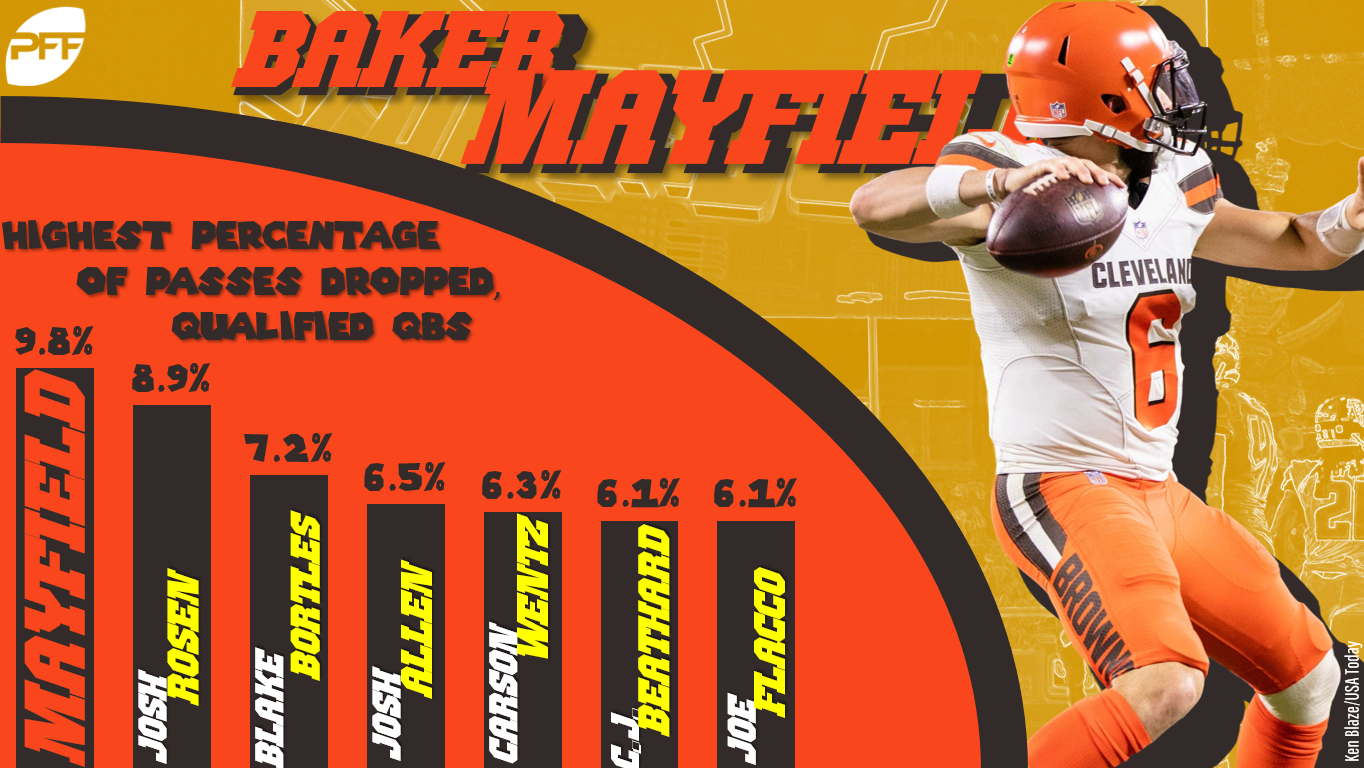 This doesn’t show up in box scores, but Mayfield has had 12 passes dropped over his past three games, as he boasts an adjusted completion rate of 69.0% in that span compared to his actual percentage of 52.3. Still, he’s stayed aggressive taking shots downfield and has been accurate on 9-of-19 deep throws as a starter. He’s also developed a nice rapport with David Njoku, who somewhat quietly ranks as a top-five fantasy tight end over the three games Mayfield has started.

A career fantasy QB2, Flacco is currently the QB17 despite ranking fourth in dropbacks (46.5 per game). All of that volume could pay dividends Sunday against New Orleans. The Saints are a bottom-four graded coverage unit, having yielded the third-most fantasy points to opposing passers. Only Trubisky has been given a clean pocket more often than Flacco, who would be wise to toss more than two targets to John Brown.

Rather than big chunk plays against Tennessee on Sunday, Baltimore was methodical in converting 13-of-18 third and fourth downs to dominate time of possession. Possession receiver Michael Crabtree was a beneficiary of that approach, catching six-of-six passes for a season-high 93 yards and a score. The league leader in drops through five weeks, a confident Crabtree paired with a dynamic Brown gives Flacco a formidable perimeter tandem. The Ravens have an implied game total of 26 points.

This year’s rookie QB class is a mini cheat code in the streaming picture, and we’ve only seen glimpses from Josh Rosen. Darnold was PFF’s top-graded passer in Week 6, as his performance improved for the third consecutive week. Over that span, he is averaging 0.52 fantasy points per dropback, which is back-end QB1 territory.

Up next is an enticing matchup with the Vikings. Prior to holding down Rosen on Sunday, Minnesota had given up 776 yards and seven scores through the air over its previous two outings (LAR, PHI). The Jets dialed up play-action a league-high 44.1% of the time in Week 6, and Darnold was also accurate on three of his four deep throws. Clearly, the game plan was to try and catch Colts’ safeties crowding the line in the wake of Isaiah Crowell’s record-setting rushing performance.