It’s on to Week 4 of the fantasy football season, and the quarterback streaming options continue to be plentiful.

Seven of the top-12 fantasy quarterbacks Sunday were parked on the bench in more than half of ESPN lineups. Considering 18 QBs are currently rostered in at least 50 percent of leagues, that’s an awful lot of wasted fantasy points. As we’ve seen on a weekly basis, “start your studs” should not be gospel when it comes to the quarterback position in fantasy. Russell Wilson has merely been a fantasy backup (QB16) thus far, along with the likes of Tom Brady (QB19), Andrew Luck (QB21) and others who were drafted as weekly starters.

Of course, the late-round QB draft strategy is not without its risks. Jimmy Garoppolo suffered a season-ending knee injury, sending those owners scrambling in search of replacement options. Elsewhere, Dak Prescott and Marcus Mariota have vastly underperformed, ranking 29th and last, respectively, in qualified fantasy scoring. The quarterback position is in a constant state of flux, and so my goal is to arm you with the right tools from our database in order to gain a competitive edge.

The Panthers and Redskins are both idle this week, taking Cam Newton and Alex Smith out of the equation.

Notes: It wasn’t pretty for Tyrod Taylor even before he went down, and Baker Mayfield’s performance has earned him the starting gig moving forward. … Coming off a 34-point outburst against New England in Week 2, Blake Bortles came back down to earth against Tennessee. The key difference? After not being sacked or hit once against the Patriots, Tennessee pressured Bortles on 28 percent of his dropbacks and sacked him three times. … Andy Dalton and Alex Smith had serviceable fantasy outings, although Dalton was graded markedly better despite a few turnovers that weren’t his fault. … Ryan Fitzpatrick is the first player in NFL history to throw for 400 yards in three straight games. He’s an automatic start until further notice, if not for the entertainment value alone.

Below are the most attractive options for QB streaming for Week 4 who are either widely available (below 50 percent ownership in ESPN), on your bench (started in less than 25 percent), or priced cheap in daily formats (outside the top-12 QB salaries on FanDuel’s Sunday slate).

Dragging down Dalton’s 350 yards and two touchdowns against Carolina were four interceptions, although only one of those picks was actually on Dalton. That’s where our analyst grades help to isolate the true measure of a player’s performance, as Dalton earned Sunday’s second-best passing grade. Even with that unfortunate box score, Dalton is fantasy’s QB10 through three weeks.

He remains widely available heading into an indoor matchup against a decimated Falcons defense that is now minus both starting safeties on the backend, in addition to the loss of LB Deion Jones. Ultimately, Dalton’s streaming viability hinges on the health of A.J. Green, who is dealing with a groin injury. But even as six-point underdogs, the Bengals have an implied total of 23 points in a game they figure to be airing it out plenty. 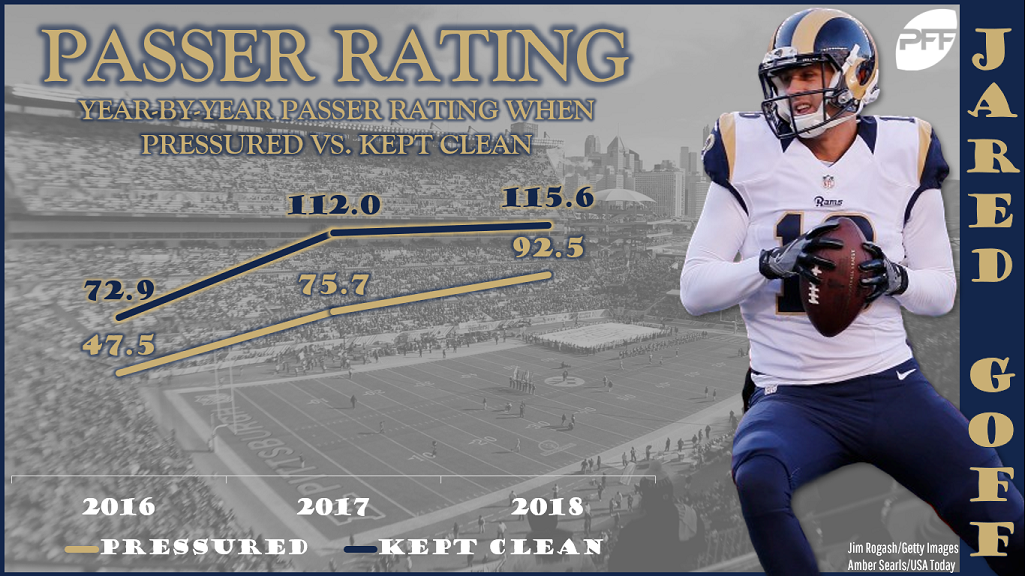 Apart from it being a short week, there’s not a whole lot to dislike about Goff’s streaming potential this week. Goff was one of our Week 3 Sunday Standouts, and not just because three different Rams’ linemen went the whole game without surrendering a single pressure. The former top overall draft pick was accurate on 88.2 percent of his aimed throws and managed a perfect passer rating of 158.3 on his four dropbacks when pressure did get to him.

If Goff is indeed a system quarterback, as some have argued, he’s doing a pretty good job of hiding it behind some sensational play. On throws targeted 10-plus yards downfield, Goff was 9-of-11 including two completions for 75 yards and a score on his two attempts 20-plus yards downfield. Somewhat quietly, Goff has moved into the top-10 fantasy QBs after three weeks. Better yet, Vegas books have assigned the Rams an implied game total of 28 points when they host the Vikings Thursday.

Keenum turned in his first true dud this past week, managing only 192 passing yards with an interception in a tough road matchup at Baltimore. Of course, that matchup is why he was faded from our Week 3 recommended streaming options in the first place. But this week, Keenum gets a decidedly better matchup when the woeful Chiefs come to Mile High. In addition to having allowed the second-most fantasy points per game to opposing QBs so far this season, Kansas City owns PFF’s second-worst pass coverage grade, ahead of only San Francisco.

Wearing the proverbial banner of “home dogs” according to Las Vegas oddsmakers, the Broncos figure to be playing catchup against the white-hot Patrick Mahomes, making Denver’s implied game total of 25 points all the more appealing. When Keenum had a clean pocket on 85 percent of his dropbacks back in Week 1, we saw him pick apart the Seahawks for 329 yards and three scores. RG Connor McGovern has helped stabilize the Broncos’ O-line and is coming off a game in which he had an impressive pancake block on a screen and allowed just a single hit on 37 pass-blocking snaps.

Now that the cat’s out of the bag, Mayfield makes for an intriguing play against Oakland this week in DFS tournaments and 2QB formats. Mayfield’s impressive debut notwithstanding, the Raiders are exactly the kind of defensive unit to target in fantasy. After three weeks, they own PFF’s fifth-worst coverage grade and third-worst pass rush.

As for Mayfield, he’ll have had 10 days to prepare while getting starter’s reps in practice. Even pressed into action unexpectedly, Mayfield boasted Week 3’s second-best adjusted completion percentage as only two of his 23 attempts were off target. Mayfield’s promotion is another bonus for Jarvis Landry owners (in addition to Josh Gordon’s departure), as Landry saw 11 targets and eclipsed the century mark.

Another surprise name among fantasy’s QB1s in the early going is Tannehill, who is coming off his best performance of the season. Granted, it was against the aforementioned Raiders and their porous pass defense. Still, even putting aside a fluky pass that went for a long TD, Tannehill did complete a couple of long throws to DeVante Parker and Kenny Stills, the latter of which went for a score. In addition, Tannehill did not have any turnover-worthy plays.

Say what you will about Parker and his disappointing career thus far, but he’s put forth his best numbers when Tannehill is on the field, and that was evident again this past week in Parker’s first action of the season. Of course, Tannehill has also made good use of speedsters Albert Wilson and Jakeem Grant. If there’s some cause for concern, it’s that Tannehill’s current TD rate of 9.5 percent is more than double his career average and is sure to regress at some point.