As we head into Week 8 of the NFL season, byes and injuries and surprise performances have changed the defense/special teams landscape in fantasy football, meaning we need to be on the serious lookout for units worth streaming.

The weeks seem to be flying by as we enter the dog days of the fantasy season. Week 8 was not exactly a fantasy-friendly one for DST purposes — there were only three defensive and zero special team touchdowns this week. There were also three teams that put up goose eggs from a DST standpoint.

I’m not going to lie — finding DST options for Week 9 has been a bit daunting with six teams on a bye, including three or four struggling offenses we love to stream against on a weekly basis. The teams on a bye this week are Arizona, Cincinnati, Indianapolis, Jacksonville, NY Giants, and Philadelphia.

In what shapes up as a lean week for streaming purposes I did find the following DST options for Week 9:

The Chiefs defense has quietly put up top-10 fantasy numbers over the past three games and have a fantasy-friendly matchup in Week 9. Last week, despite being without edge rushing threat Justin Houston, Kansas City posted five sacks led by Dee Ford’s three. As I’ve often mentioned we like to stream DST units facing rookie quarterbacks. It’s also advisable to stream a defense facing an offense that has allowed 33 sacks on the season and just fired their head coach and offensive coordinator. The Chiefs offense will likely roll up a big lead, forcing Baker Mayfield to throw the ball more, which will lead to plenty of splash-play opportunities. 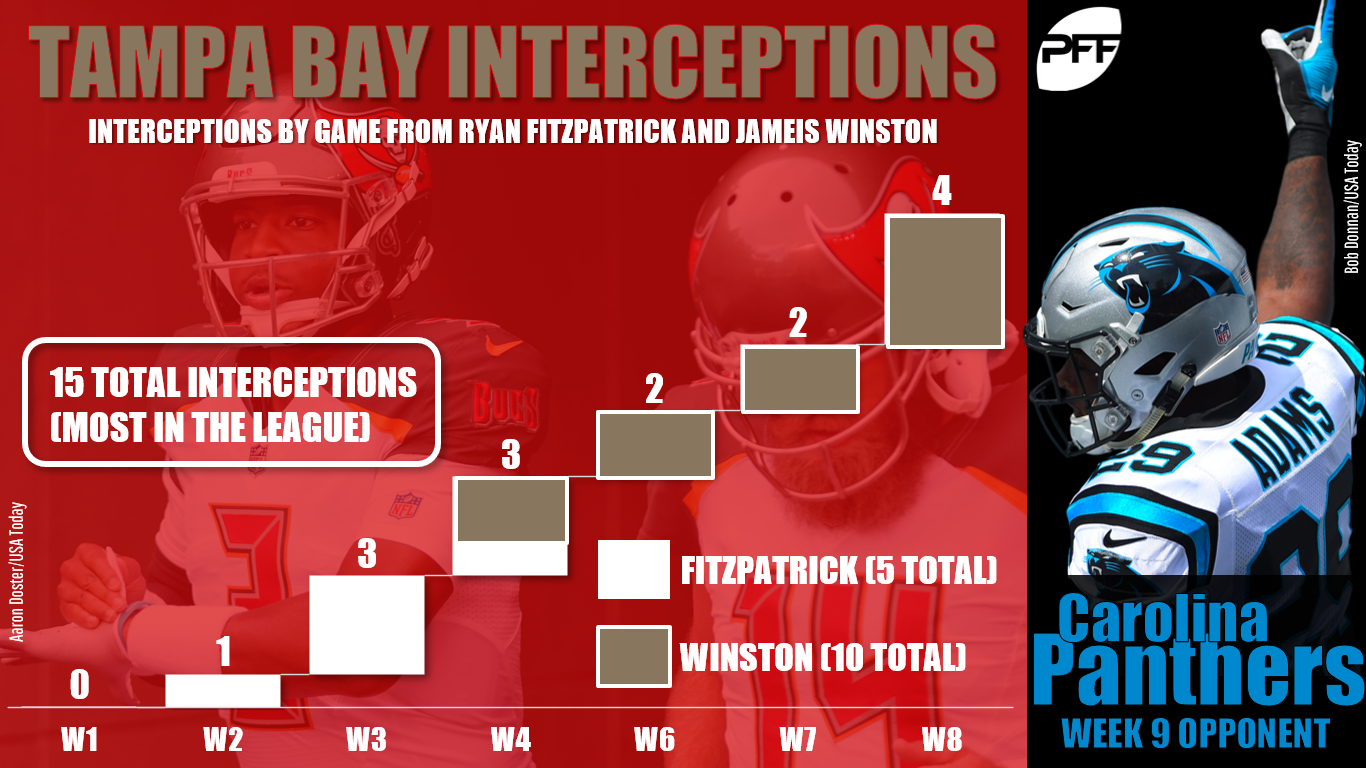 The Buccaneers continue to be a fantasy gold mine for opposing DST units. Jameis Winston once again played fast and loose with the football last week, throwing four interceptions (one returned for a touchdown) before being benched in favor of Ryan Fitzpatrick. Fitzpatrick will reportedly be the starting quarterback for Week 9. Keep in mind that in Weeks 3-4 Fitzpatrick threw four interceptions, leading to Winston regaining the starting job. The Buccaneers are also struggling in pass protection and have allowed 10 sacks in the past two games. The Panthers are a great streaming option at home this week.

The duo of J.J. Watt and Jadeveon Clowney have been leading the Texans DST unit to lofty heights from a fantasy perspective over the past few weeks. In the past three games they have been credited with 26 total quarterback pressures and have a combined four sacks. This unit has also been forcing splash plays, forcing seven turnovers in the past three games. The Broncos offense continues to struggle, as Case Keenum was sacked five times in Week 8 and turned the ball over twice. Keenum has now thrown an interception in all eight games for Denver. This is a plus matchup for the Texans, so let’s roll them out.

This is our sleeper long-shot DST selection for Week 9. This Thursday night matchup has the potential to be a … well … less-than-scintillating affair. The 49ers and Raiders have combined for a total of just two wins in 2018. The 49ers have by far the better defense and managed three sacks and a pair of turnovers in their loss to the Cardinals last week. Oakland is coming off one of their better offensive performances in their loss to the Colts but is still a struggling unit on the season. The Raiders have allowed three or more sacks in four of the past five games, including a six-sack performance by Seattle in Week 6.

After leading the team to a stunning upset of the Chicago Bears in Week 6, the bloom is quickly coming off the rose for Brock Osweiler. Over the past two weeks the Dolphins have allowed six sacks and Osweiler had a very rough Week 8. He threw his first interception and nearly had a fumble that was returned for a touchdown that was luckily overturned by replay review. The Jets DST has been surprisingly productive despite struggling to get to the quarterback with just 17 sacks through eight weeks. The Jets are getting it done with splash plays with 10 interceptions and 15 total turnovers as well as a pair of defensive touchdowns. The special teams have also added an Andre Roberts punt return for a score in 2018.

This game should prove productive for both DST units. I’m once again advising using the rookie quarterback rule. Sam Darnold has turned the ball over 11 times in eight games while accounting for 12 total touchdowns. The Dolphins are among the league leaders with 11 interceptions and bring sneaky good special teams production. Third-year wide receiver Jakeem Grant has returned both a punt and kickoff for a touchdown this season. In the Week 2 matchup between these teams Miami had one of its best DST games with three sacks and three turnovers.

This is our Hail Mary sleeper streaming option for Week 9. The Lions haven’t been creating turnovers on a consistent basis but have put up 10 sacks over their last three games. The addition of Damon Harrison paid immediate dividends as he pitched in with a sack in his Lions debut last week. The main reason I like Detroit this week is that while the Vikings offense has potent all season, it has also been generous to opposing DST units. Over their last three games Minnesota has given up nine sacks, four turnovers, and both a fumble and interception return for a touchdown. Detroit is averaging 14 total quarterback pressures per game and a pressured Kirk Cousins can be a turnover-prone Kirk Cousins.