The best DSTs to stream in fantasy in Week 7

Earlier this offseason, I recommended this approach, and outlined my preferred strategy for streaming defenses week-to-week. Obviously, we’re looking to target good defenses against bad or inexperienced quarterbacks. Bonus points are awarded to defenses heavily-favored and/or playing at home. Beyond that, the stats that matter most are opposing passer rating vs. passer rating and sacks per dropback vs. sacks per dropback allowed.

Here are the defenses you should be looking to add in Week 7:

Congratulations to those of you who listened to us the last two weeks and added the 49ers — they’re no longer a weekly streaming option, they’re a top-five defense moving forward. If you missed out, maybe you’re in one of the lucky 35% of leagues where they’re available. If so, they might be your top recommended waiver add on the week. 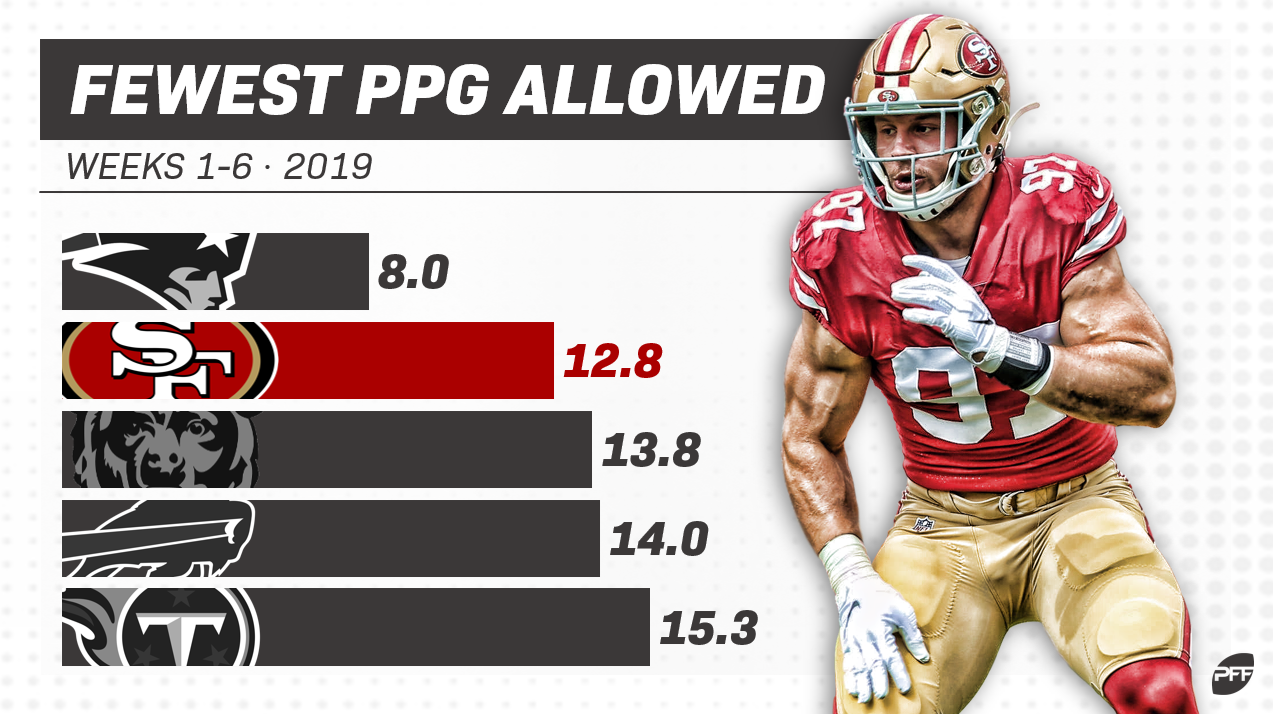 The 49ers are the only defense to rank top-three in both pass-rush grade and pass-coverage grade. They rank behind only the Patriots in points allowed per game (12.8), yards allowed per game (262.6), and passer rating allowed (61.8). They rank third-best in sack rate (9.6%) and fourth-best in turnovers generated per game (2.0). They’re also averaging the second-most fantasy points per game (14.0) of any defense, while Washington is giving up the third-most fantasy points per game of any offense (12.2).

Tennessee’s defense isn’t quite on San Francisco’s level, but they’re certainly better than their ownership percentage implies. The Titans are one of only four teams to rank top-10 in both pass-coverage and run-defense grade. They rank top-six in fantasy points per game (9.0), sacks per game (3.0), and points allowed per game (15.3).

The Chargers’ offense, meanwhile, ranks 11th-worst in points scored per game (20.0) and eighth-worst in turnovers per game (1.83). Their biggest area of weakness is their offensive line, which ranks third-worst pressure rate over expectation.

The Titans are one of your safest options this week, as home favorites up against a Chargers offense that has the fifth-lowest implied point total of the week (18.5). And, as an added bonus, they have an even softer matchup in Week 8 (at home against Tampa Bay).

Green Bay’s defense hasn’t been as productive in recent weeks, but they still rank eighth in fantasy points per game (8.8) and ninth in points allowed per game (19.2). More impressively, they simultaneously rank fifth-best in passer rating allowed (77.0) and second-best in pressure rate over expectation. As heavy home favorites, up against a Raiders offense that is projected to score only 20.0 points (sixth-fewest on the week), Green Bay is a safe bet to finish top-10 this week.

In an especially difficult week for streaming defenses, one might be forced to turn to the Giants. While their defense probably isn’t great, they have been productive in recent weeks. They’ve recorded three or more sacks in each of their last five games. Across their last three games, they average 2.3 turnovers and 13.7 fantasy points per game. Arizona’s offense, meanwhile, ranks fourth in sacks per game (4.2) and ninth in fantasy points per game allowed (8.2).

Looking ahead: The Steelers (30% owned) rank fourth in fantasy points scored and have a best-possible matchup against the Dolphins in Week 8, following their bye.