Welcome to the Wild Card edition of Snaps, Pace, & Stats, where we examine trends in snap totals and no-huddle usage. It is meant to be a 30,000-foot view of upcoming games, with the goal of identifying which matchups will – and which will not – be played on fertile fantasy football soil.

The first round of the playoffs features three rematches, with one of them the third meeting of the season between the Colts and Texans. From a snaps pace perspective, it is a clear standout among the Wild Card matchups. The fact that it will be played first presents an interesting dilemma for DFS aficionados – especially those who make frequent use of the late-swap option. Let’s dive right in with that game.

While it didn’t quite match their Week 4 barnburner that produced 71 points and 167 snaps, we still saw elevated play volume when the Texans hosted the Colts in Week 14. We should see it again Saturday.

Colts games averaged the fifth-most combined snaps this season, one spot ahead of the Texans. Indianapolis deployed the second-most pass-heavy offense during one-score games this year (65.3%), and nothing has changed over the last four weeks (65.8%). They operate at the league’s quickest seconds-per-snap rate and have gone to the no-huddle on 13.4% of their plays (fourth-highest). Only Ben Roethlisberger threw more passes than Andrew Luck this season, and only Patrick Mahomes threw more touchdowns. Luck strafed Houston for 863 yards and six touchdowns in two games.

The Texans underwent a midseason metamorphosis into a more run-heavy offense, but have since reverted. From Week 1 through Week 5, Deshaun Watson dropped back 46.8 times per game. Over the next six contests, his dropbacks average fell to 30 as his coaches tried to insulate their injured quarterback from further damage. Watson’s dropbacks have since rebounded to 42.8 per game, although he still takes a beating behind Houston’s Swiss cheese offensive line (31st in pass-blocking efficiency).

Both the Colts and Texans feature pass funnel defenses, as Houston (first) and Indianapolis (seventh) grade well in run stopping and have more questions in pass coverage. During the last four weeks, opponents have thrown against the Texans on 64.4% of snaps while games were within one score. Considering how close this game projects to be (Texans are two-point favorites), and how ineffective the Colts running backs were against Houston in their last meeting (2.0 yards per carry), we know whose arm will be in constant motion – and injecting the game with play volume.

Given the concentrated touch distributions of these passing games – it’s DeAndre Hopkins and T.Y. Hilton and then everyone else – we know exactly where to start for fantasy. With overall play volume expected to be elevated, ancillary weapons on each offense are also in play – including the elusive Keke Coutee and his balky hamstring. Despite Will Fuller’s presence back in Week 4, Coutee ran the second-most receiver routes for the Texans (80) and saw a whopping 14 targets in the first game of his career. Both defenses also allowed top-three reception averages to tight ends.

Looking through a play-volume prism, this matchup clearly stands out as one to attack on both two- and four-game DFS slates. The fact that it is positioned as the first game of the weekend should not discourage us from loading up.

Judging by the ground-and-pound reputations of these typically plodding offenses, not to mention the Week 3 tractor pull they held a few months ago, this matchup doesn’t shape up as a play-volume bonanza. Fortunately for the game’s fantasy prospects, much has changed since the Cowboys oozed out 13 points on 58 snaps during a loss in Seattle. 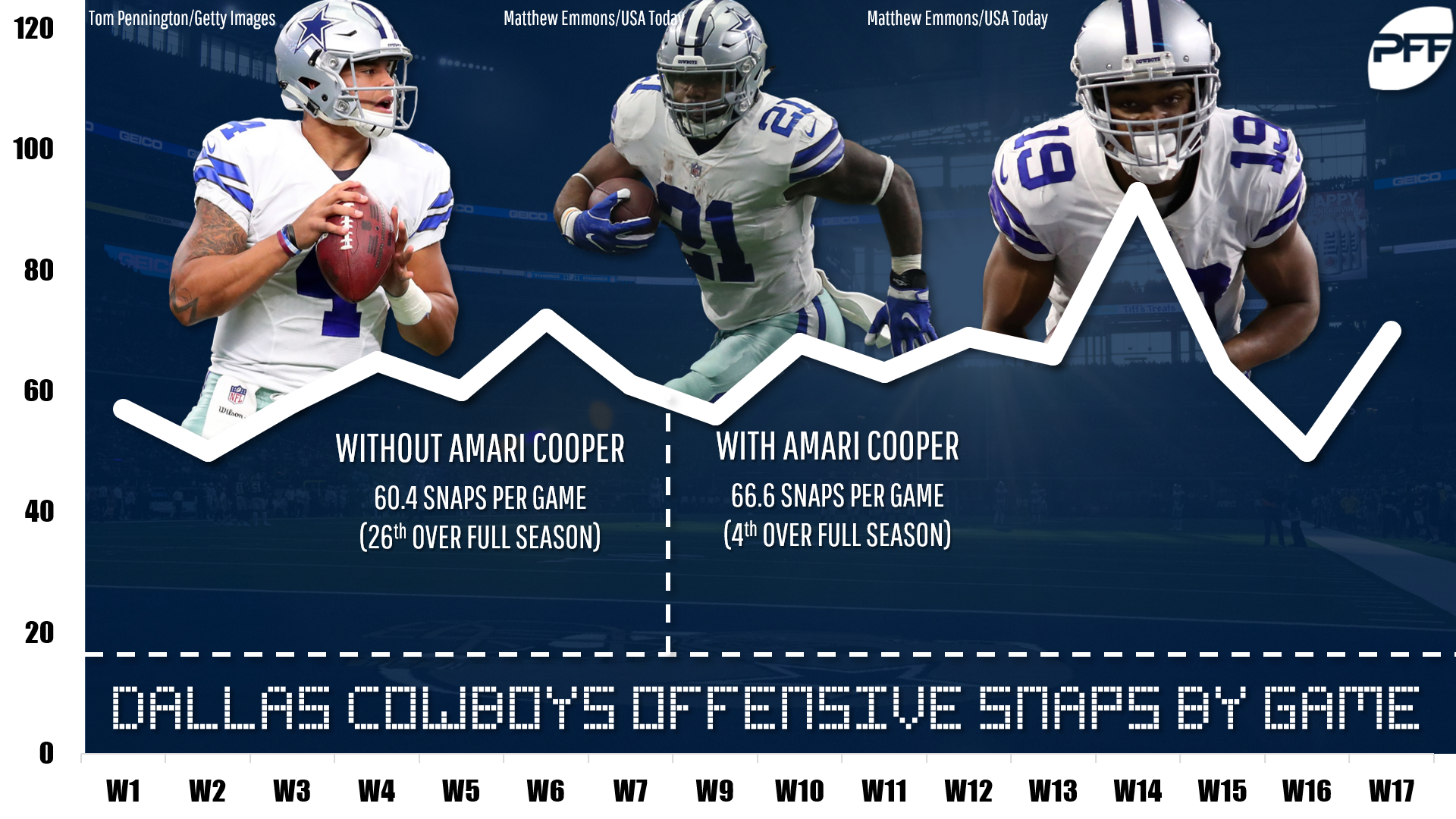 After Amari Cooper’s midseason arrival in Dallas, the Cowboys leapt from 26th in plays-per-game to fourth. They added 6.2 snaps, on average. They’ve risen from the 25th-most plays allowed per game to the 20th-most, and the snap-volume injection is due in large part to their pass rate jumping from 54% (28th highest) to 59% (16th). As odd as it sounds, the Cowboys are a balanced offense with a league-average snaps pace in neutral situations.

Of course, just because Dallas has apparently joined the 21st century on offense doesn’t mean this will be a back-and-forth shootout, overflowing with play volume. Seattle ranks 16th in plays per game (63.2) and they allow the third fewest (59.7). The Seahawks have a middling snaps pace and hand off at the league’s highest rate during neutral situations (53%). They will continue to put the ball in Chris Carson’s belly, even if he averages a meager 3.2 yards like in their last meeting with the Cowboys. He had a hefty, clock-grinding 32 rushing attempts in Week 3.

While standout receivers Cooper and Doug Baldwin will play this time – and stiffs like Terrance Williams and Brandon Marshall will not – the most attractive fantasy targets unsurprisingly reside in the backfield. After failing to haul in five of the eight targets he saw in Week 3, Ezekiel Elliott is now a functional member of the passing game. Seattle allowed the fifth-most running back catches per game (6.2), and Christian McCaffrey is the only back who has seen more targets than Elliott since Week 10. The Cowboys allow the fifth-most receptions to backs, potentially supplementing Carson’s heavy handoff workload.

As we’ve done for most of the season, we’ll be relying on splash plays from Russell Wilson and the Seahawks passing game. After repeatedly rising pass attempt totals for the first six seasons of his career, culminating in last year’s 553 passes, Wilson threw only 427 times this season. Taking fantasy nibbles at each team’s passing game is more advisable than large bites. While this matchup isn’t the auto-fade it would have once been – especially given the limited DFS slate – it’s not a “fire all cannons” spot from a play volume perspective.

If we want play volume, we’ve come to the wrong place despite the Ravens leading the league with a 70.9 snap average. Their games average the second-most combined plays, but it’s almost entirely driven by their snap total. Baltimore allowed 60.9 plays per game this season (eighth-fewest) – a mark that’s fallen to 53.7 during the last three weeks. It includes a win over the Chargers in which Los Angeles mustered only 10 points on 57 snaps.

The Chargers do nothing to spur play volume. They operate at the league’s slowest seconds-per-snap pace, average the fifth-fewest snaps (59.1), and allow the 10th-fewest plays per game (60.3). Their games average the second-fewest combined snaps. During their game in Los Angeles, the Ravens ran more than 10 fewer plays than they averaged against everyone else.

Los Angeles passed at a middling rate, both on the season (57.9%; 14th-highest) and during the last four games (57.9%). Philip Rivers threw his fifth-most passes of the season against the Ravens (37) but produced his second-lowest yardage total (181) and worst passer rating (51.7). Expecting a significantly better performance, or at least something approaching fantasy usefulness, may be asking too much – especially in Baltimore during an early time slot and with Keenan Allen at less than 100 percent. Improving upon the 3.2 yards per carry average the Chargers eked out may also be a tall order – especially with Melvin Gordon still gimpy. With the matchup’s likely thin play volume, an efficiency boost will be necessary for fantasy viability.

We know what the Ravens offense is now. During the last month, they’ve run the ball on more than 60% of situation-neutral plays. For comparison, the Seahawks led the league with a 53% situation-neutral run rate. We can throw a random dart at one of Lamar Jackson’s pass-catchers – Mark Andrews paid off on only two targets in Week 16 — but the more likely profitable approach is to roster the Ravens running game. The Chargers eighth-worst-graded run defense allowed 4.5 yards per carry to Baltimore two weeks ago, and both Gus Edwards and Kenneth Dixon are in play along with Jackson. They probably aren’t high-ceiling options, particularly with the clock continually grinding, but they offer the best chance of squeezing blood from this fantasy stone.

This matchup brings the most uncertainty, from both player performance and pace projections. The Eagles and Bears operate at bottom-six seconds-per-snap paces when games are close. Philadelphia’s games average the 11th-most combined plays and Chicago’s rank 18th-highest. They have played high-play-volume games and contests that were over in a blink of an eye. This matchup offers GPP-friendly volatility, and cash game heartburn. 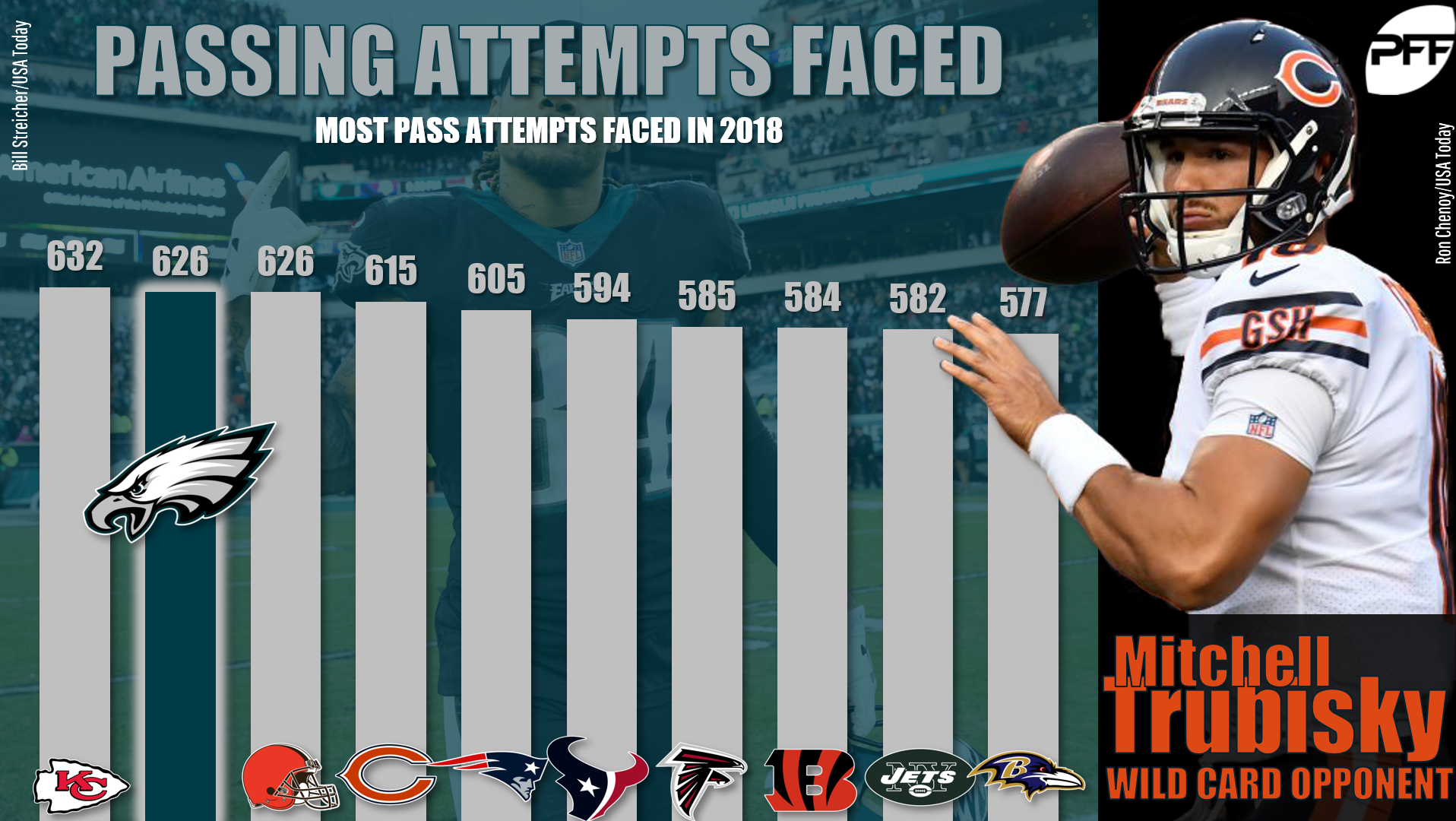 Adding the ultimately unpredictable and potentially nicked-up Nick Foles to the stew only throws more unknowns into our projections. Over the last month, the Eagles are slightly more pass-heavy during one-score games (63.4%; sixth-highest) than they were before that (62.3%; eighth). During that time, they are averaging the 15th-most plays per game (63.3) but allow the second-most (68.5). Opponents are passing against them at the league’s highest rate for the season (65.4%), which has helped raise play volume in their games.

The Bears are not a pass-happy offense, however. They throw at only the 24th-highest rate during one-score games (55.2%), and it’s even lower during the last month (54.6%). How much will Matt Nagy put on Mitchell Trubisky’s shoulders in his first career playoff game after an occasionally promising, but mostly shaky second season? His passing grade ranked 37th out of 38 qualifying quarterbacks, although he’s been sharper in home games. If the favored Bears choose to primarily keep the ball on the ground while the game script remains friendly – or opt for high-percentage running back passes – play volume will suffer due to their plodding pace.

There’s less of a chance the Eagles go run-heavy, considering their own pass-happy track record, unsettled backfield, and Chicago’s second-highest-graded run defense. Opponents pass against the Bears at the fourth-highest rate for the season (61.6%) and a league-high 72.8% rate during the last month. The Eagles best fantasy bets reside in the passing game – particularly Alshon Jeffery and Zach Ertz — where the Bears have shown sporadic vulnerability. It doesn’t mean we should be targeting this game heavily, as both defenses are mostly stout – but when lined up next to the Chargers and Ravens on Sunday’s slate, this is the juicier matchup from a pace perspective.