Pro Football Focus is here to break down the most efficient fantasy football players leading into Week 8 of the 2018 NFL season. This article breaks down which running backs, wide receivers, and tight ends have the best matchups of the week.

Dalton is still owned in just 66% of season-long leagues, but he’s a top-10 fantasy quarterback this week against the Buccaneers, who have given up the most fantasy points to opposing quarterbacks this year.

Royce Freeman hasn’t been practicing and appears to be on the doubtful side of questionable, which tees Lindsay up for a huge game against the Chiefs, who have surrendered the most fantasy points per touch to opposing running backs.

The Buccaneers have given up the third-most fantasy points per touch to opposing running backs, and Mixon is averaging 20 touches per game. Mixon has not yet had a breakout game, with over 84 rushing yards in three games but none over 100. That changes this week.

Lockett has one of the better individual WR/CB matchups of the week against Detroit’s Teez Tabor, our worst-graded cornerback (41.2) out of this week’s starters. 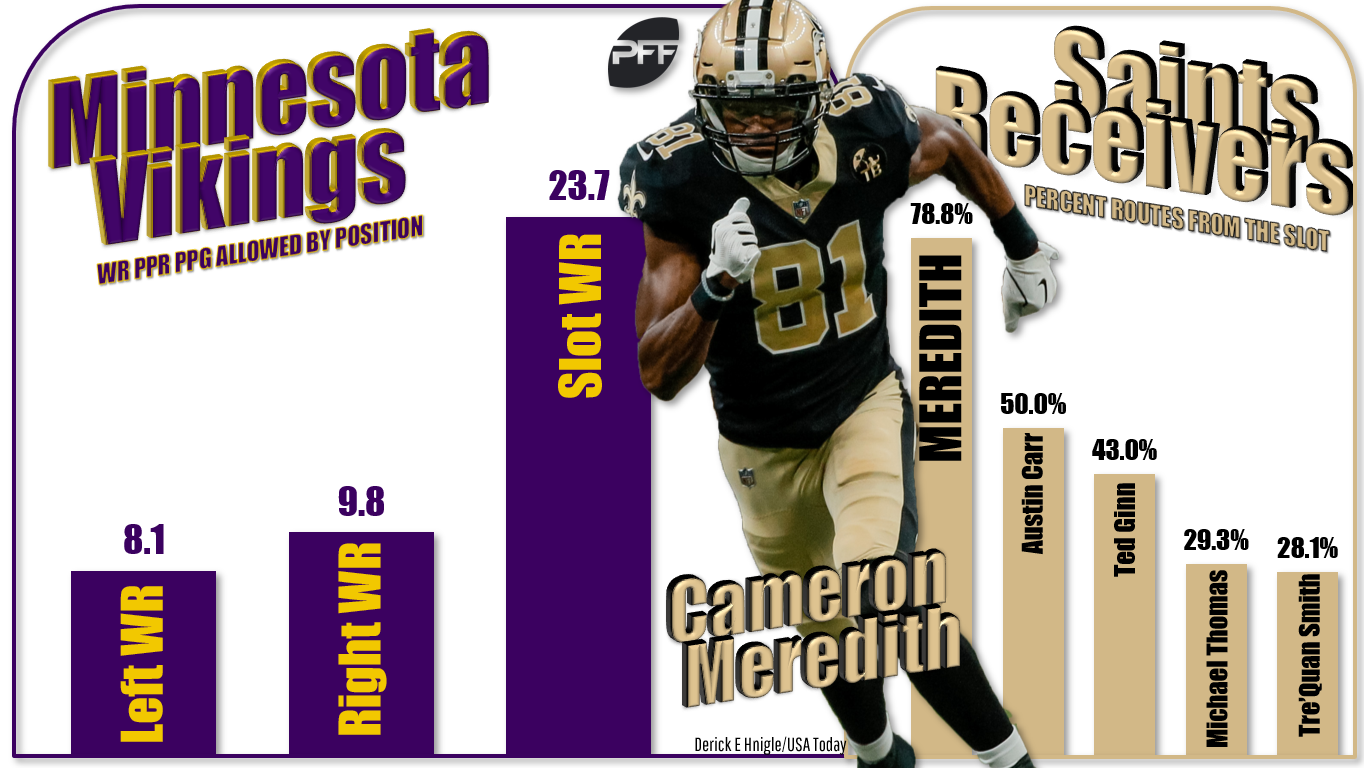 Meredith was targetless in Week 7, so he’s far from a sure thing, but he drew five targets in Week 5 and another four in Week 4. Meredith runs 79% of his snaps from the slot, where he’ll see a lot of Mackensie Alexander, who has given up a 79% catch rate this year.

The Panthers have given up the third-most fantasy points per target to opposing tight ends, including allowing a league-high (tied) four touchdowns to the position. Andrews has seen six red-zone targets on the year, tops among Baltimore’s group of tight ends.

Gesicki faces the Texans Thursday night, who have allowed the fourth-most fantasy points per target to opposing tight ends on this year. With Albert Wilson on IR and Kenny Stills out for Thursday’s game, Gesicki should see plenty of work.

The Ravens, Newton’s Week 8 opponent, have given up the fewest fantasy points per dropback to opposing quarterbacks. The Ravens are giving up just 215 passing yards against and have ceded only four passing touchdowns in their last five games.

Big Ben has an underrated tough draw against the Browns, who have given up the second-fewest fantasy points per dropback to opposing quarterbacks this year. It’s a home game, which makes Roethlisberger tough to bench, but this divisional matchup is harder than people realize, and he’s more of a bust than boom candidate this week.

Darren Sproles isn’t practicing and Wendell Smallwood is questionable, which will make Clement a popular option again in Week 8 against the Jaguars. But Jacksonville is giving up the third-fewest fantasy points per tough to running backs on the year — although they have been gashed in three straight games by Kareem Hunt, Ezekiel Elliott, and Lamar Miller. It’s hard to know which Jags D will show up in Week 8, but Clement is a few rows below those players (especially the first two) in terms of talent.

Drake has a tough Week 8 matchup on a short week on the road against the Texans, who have ceded just one RB rushing touchdowns against all year. Despite his big game in Week 7, he still had just 10 touches and ran behind Frank Gore.

Despite getting into shootouts seemingly every week, the Kansas City Chiefs defense has given up the fewest fantasy points per target to opposing wideouts this year. It’s a tougher overall matchup for Sanders than the fantasy community believes.

Garcon figures to see a healthy dose of Patrick Peterson in Week 8, who remains one of the game’s best cornerbacks. Peterson is our No. 2-graded corner (84.8) and is giving up just 0.16 fantasy points per route run against, lowest among all corners who have defended at least 70 routes. 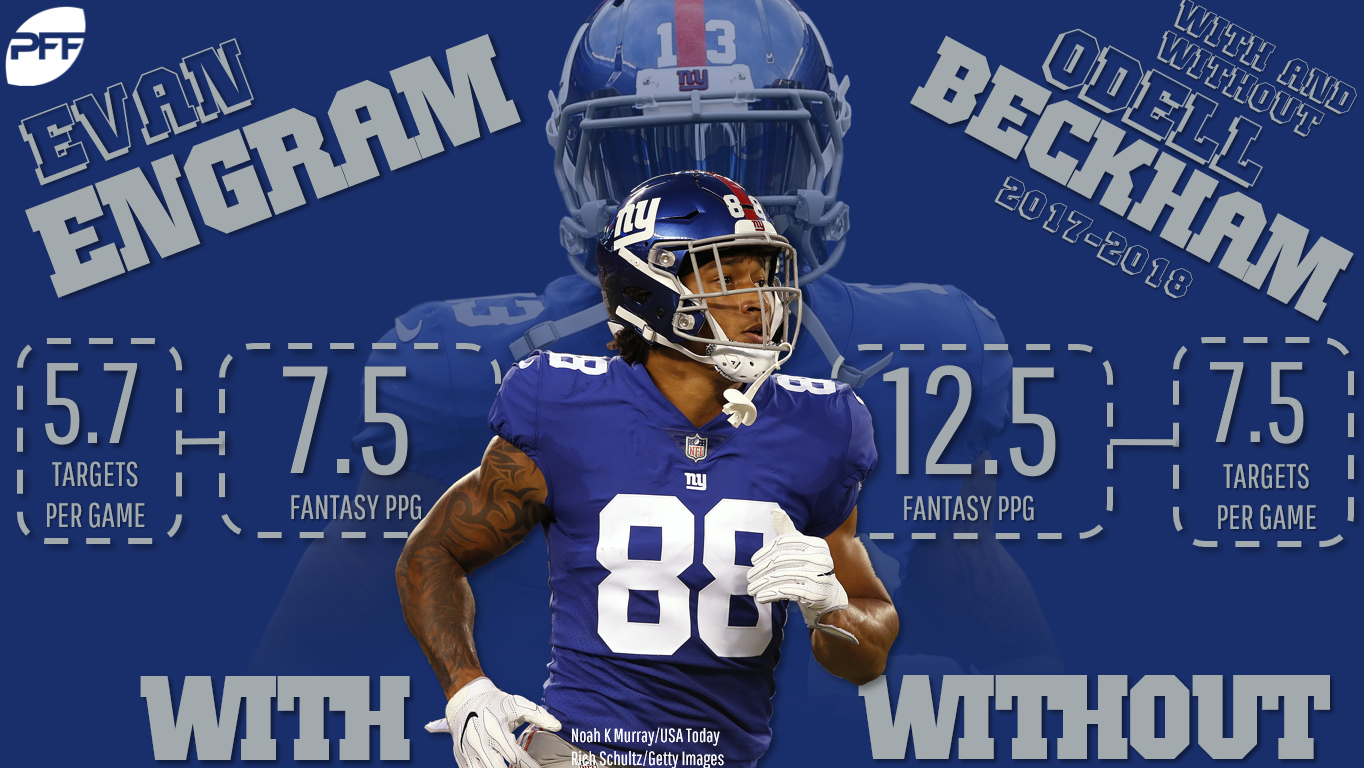 Engram returned in Week 7 as a distant fourth in New York’s targeting pecking order, as his four targets were far from Odell Beckham Jr. (11), Saquon Barkley (10), and Sterling Shepard (8). It will be hard for him to right the ship in Week 8 against the Redskins, who have given up the second-fewest fantasy points per target to enemy tight ends.

Minnesota’s offense is so heavily funneled through its receivers — Adam Thielen and Stefon Diggs account for 57% of Minnesota’s team targets — that there’s not a whole lot left to go around. The Saints have given up the fifth-fewest fantasy points per target to opposing tight ends on the year.

(READ MORE: Check out the trade value chart for Week 8 to identify players to try to acquire.)