Nobody playing fantasy football doesn’t at least pay cursory attention to fantasy football rankings. Our own PFF Fantasy staff rankings are (if we do say so ourselves) an invaluable resource. But that doesn’t mean our staff are all in agreement on every player. Consensus rankings take everybody’s input and puts it into one rankings set, but sometimes it is worth exploring the reasons why certain players carry big gaps.

Below, our three rankers (Jeff Ratcliffe, Scott Barrett, and Daniel Kelley) identify the players with some of the biggest gaps between their high- and low-water marks in rankings and offer brief pros and cons as to why those players are ranked where they are. Who you ultimately side with is up to you. But these explanations should offer more context into the most notable gaps in our rankings. 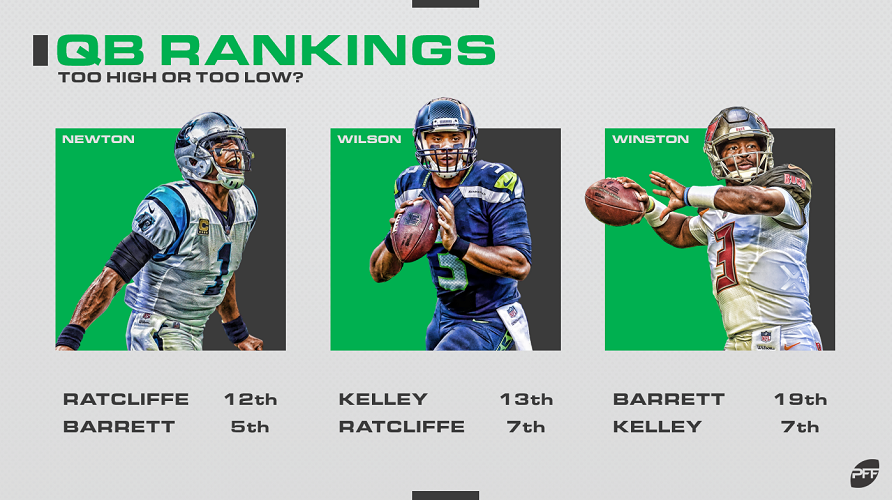 Barrett: Since entering the league, Newton has ranked eighth (2018), fifth, 13th, first, seventh, fifth, fifth, and third in fantasy points per game. The shoulder concerns should finally be behind him and he’s due for a positive regression in the rushing department.

Ratcliffe: There’s no denying Newton’s viability for fantasy purposes, but we saw last season how significantly this shoulder can impact his fantasy value. This ranking is a bit of a hedge given what we still don’t know about his shoulder entering camp. If Newton’s shoulder is good to go, he’ll likely move up. But without clarity there, drafting Newton comes with risk.

Ratcliffe: Sure, the Seahawks run the bell. A lot. But Wilson showed last season that he can still be a top-10 fantasy quarterback even with his team attempting the fewest passes by any offense since 2013. With some positive regression in the Seahawks passing attempts, Wilson should remain in the top 10 at the position yet again this year.

Kelley: Wilson’s 2018 season needed a career-best touchdown percentage (8.2%, second-highest in the league) to even manage a ninth-place fantasy finish. If the team passes more in 2019, that will be great, but it’s very likely to be offset by worse touchdown efficiency from Wilson, and he’s also a 30-year-old who has historically derived a lot of his fantasy value from his legs, but just had his first season without a rushing score.

Kelley: If Winston is as good for fantasy as he and Ryan Fitzpatrick were combined in 2018, then this is a dramatic underrank, and he should actually be first or maybe second in the ranks. But everything that was true about the Tampa Bay offense in 2018 — excellent passing-game weapons, potentially awful backfield, poor defense — remains true in 2019, which means Winston might be one of the favorites to lead the league in passing attempts and yards. A league lead in interceptions is also on the table, but with fantasy you take the good with the bad.

Barrett: Winston has volume on his side, sure, but efficiency matters far more than volume for fantasy quarterbacks. Efficiency has always been an issue for Winston, and it was never more evident than last season, getting (severely) out-played by Ryan Fitzpatrick. 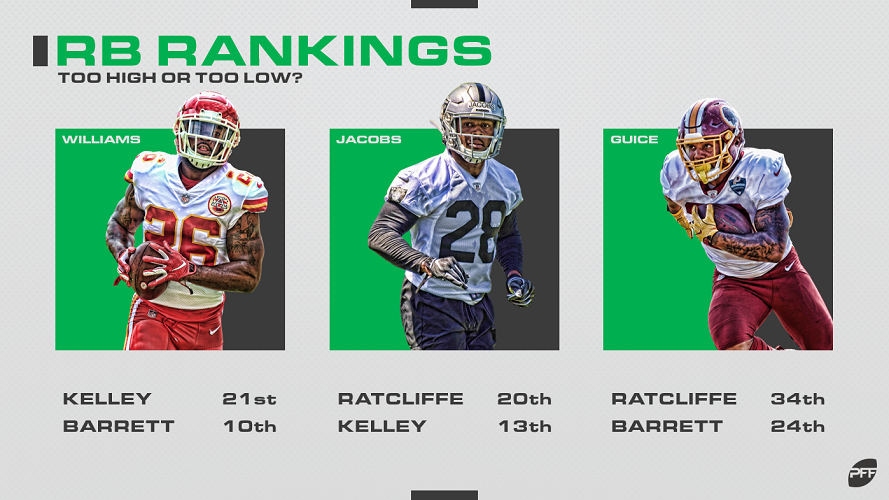 Barrett: You’re just going to have to read this, from earlier this offseason: I think Williams might be a league-winner.

Kelley: This is my ranking that has maybe the best chance of blowing up in my face. After all, Williams was dominant as a starter in 2018. Then again, that was all of six games (Week 14 through the Conference Championships), and he had a “take it easy” Week 17 game in there as well. He’s already banged up in training camp, he has one of the shortest track records of success anywhere in the league, and he has Carlos Hyde and Darwin Thompson breathing down his neck. I’m not hitching myself to that wagon.

Kelley: You can quibble on the exacts, but there are about 11 running backs this year that are going to be in the top 11 in just about everyone’s rankings — maybe not the same exact order, but it’s a pretty clear tier. Once you get past that group, you have to do a lot of looking at downsides. Nick Chubb and Marlon Mack will suffer in the passing game. Devonta Freeman just missed essentially a year to injury. And so on. Jacobs’ biggest black marks are that he’s a rookie (which hasn’t been an impediment to a lot of guys recently), a tough schedule, and a potentially bad team. Well, unless you still think Doug Martin is alive, even rookie development problems and a tough schedule aren’t likely to keep Jacobs from the field. Raw workload should be enough to keep him near the top of his tier.

Ratcliffe: There’s a lot to like about this rookie, but we can’t get too carried away. For starters, Jacobs draws a brutal stretch of matchups to start the season with the Broncos, Vikings, and Bears in three of his first five games. Those are the three worst matchups for running backs right now. We also need to see the Raiders offense take a step forward before anointing him as a fringe-RB1. Jacobs is a risk/reward RB2.

Barrett: Adrian Peterson (age 34) doesn’t scare me, and at this time last year Guice was an early fourth-round pick. At the Ccmbine this year, Jay Gruden hinted at legitimate every-down upside for Guice.

Ratcliffe: This is another injury hedge on my part. Guice is in camp and isn’t “injured” per se, but he’s coming off a torn ACL and dealt with hamstring issues in the offseason. Add to that the fact that the Redskins could struggle on the offensive side of the ball, and you have the recipe for potential fantasy disappointment. Guice is an intriguing talent, for sure, but he’s also someone we shouldn’t overvalue on draft day.

Barrett: He led the position in fantasy points last year. Why is this a hot take?

Kelley: We’re mostly out of best ball season, and these rankings are for more typical fantasy. And for all Hill does well, he’s a real boom-or-bust player. He had five games of 30-plus PPR points in 2018, but four tames under 10 and seven under 15. Add to that the risk of regression in the Chiefs’ overall offense, possible health from Sammy Watkins, and the arrival of Mecole Hardman, and it’s enough for me to bump Hill down just a few spots. He’s still great, of course.

Barrett: Over the past two seasons, Thielen ranks eighth in fantasy points per game, seventh in PFF grade, and ninth in yards per route run. He’s just really good.

Ratcliffe: Sure, he was the No. 1 fantasy wideout over the first eight weeks of the season last year. But he was outside the top-20 in fantasy scoring from that point on. So the reality with Thielen entering this season is he’s likely somewhere in between those two ends of the spectrum, which is exactly where I have him ranked.

Barrett: Over the past seven seasons, Green ranks 15th, 11th, fourth, 12th, 16th, fifth, and third in fantasy points per game. The ankle injury is a major concern, for sure, but I think you’ll get borderline-WR1 production from him when he’s on the field.

Kelley: If you can tell me right now that Green misses one game, maybe two, and he’s healthy and active for the other 14, I will concede immediately this is a likely underrank. But he’s also 31 and has missed multiple games in three of the last five years with an increasing array of injuries. The Bengals are likely to be terrible and Green is entering the last year of his deal. If the team decides to focus its attentions on the future and lean on Tyler Boyd, Green might not be the dominant force he’s been in the past … even if he can get healthy.

Kelley: Davis was PPR’s No. 27 receiver a year ago. That was despite his quarterback having a numb arm for part of the year and sitting for might-as-well-have-a-numb-arm Blaine Gabbert for other parts. And he faced maybe the toughest slate of corners in the league. Projecting him to finish lower than 27th just does not compute to me. I also don’t believe the Titans are going to be as run-heavy as their offseason talk has indicated, if only because the team only has one back who resembles anything like that kind of workhorse in Derrick Henry, and even he has already been banged up in training camp. Davis, entering the third year that so typically leads to a breakout, is my flagpole player of 2019.

Ratcliffe: Given Davis’ production last season, ranking him at 32 could be considered ambitious. Anything higher would seem to be based on speculation and not much else. The Titans’ offense is likely to be extremely run-heavy, and Marcus Mariota has shown an inability for efficiency over the last two seasons. While Davis will likely lead the team in target share yet again, there just isn’t enough meat on the bone for anything more than WR3 production.

Barrett: Last season Davis ranked 25th in expected fantasy points per game but just 40th in actual fantasy points per game. He’s never been very efficient or consistent and now has increased target-competition following the healthy return of Delanie Walker and the arrivals of A.J. Brown and Adam Humphries – all guys I like quite a bit.