Possible slow starters for fantasy in the 2019 draft

You might notice our dynasty rookie rankings don’t perfectly align with how we’re ranking fantasy football rookies for best ball drafts. That’s not a mistake — some of these rookies have more potential in the long-term compared to their peers while still being more likely to struggle in their rookie seasons.

Running backs who struggle with pass-blocking tend to have a difficult time earning playing time in Year 1 even if they’re skilled runners or pass-catchers. We discussed last year (here) how a running back’s pass-blocking ability impacts his fantasy potential.

Looking at these two metrics, let’s discuss some running backs and wide receivers who are especially likely or unlikely to struggle in their rookie seasons.

Among all combine-invite running backs, James “Boobie” Williams ranks worst and Josh Jacobs second-worst in pass-blocking grade over the past two seasons. Neither was asked to pass-block very often (just 10.3% of Jacobs’ snaps, 9.3% of Williams'), and it's clear neither was very good at it. Williams ranked worst (89.6) and Jacobs second-worst (93.0) in pass-blocking efficiency. Myles Gaskin and Miles Sanders also struggled.

Jacobs is our unanimous RB1 in dynasty rookie drafts. Williams is a good deal lower, but still one of my favorite draft-day targets, for reasons outlined here.

Interestingly, these are also probably the two best pass-catchers in the class. Williams leads all combine-invite running backs in career receptions (by 139) and receiving yards (by 673). Jacobs ranks first in career yards per target (10.4) and yards per route run (2.06).

Although it’s a concern they’ve performed so poorly as pass-blockers in college, the hope is they’ll still manage to see the field in their rookie seasons and will be running routes rather than blocking.

Jalin Moore, David Montgomery, Devin Singletary, and Ryquell Armstead stood out as being especially good pass-blockers who were also asked to pass-block fairly often. They all rank top-four (in order) in pass-blocking grade and top-five in pass-blocking efficiency over the past two seasons.

Of these names, Montgomery (my RB2) and Singletary (RB5) are highest on my board.

Among all wide receivers who were invited to the combine this year (and played predominantly on the outside), Jaylen Smith (29.5), Cody Thompson (29.5), and Damarkus Lodge (45.6) ranked bottom-three in passer rating when targeted when in press coverage. Of the wide receivers likely to be drafted highly, Deebo Samuel and Marquise Brown stood out as ranking surprisingly low.

Samuel ranked sixth-worst (71.2) and Brown eighth-worst (75.0) in passer rating when targeted in press coverage, though they did rank better in fantasy points per target and yards per target average. 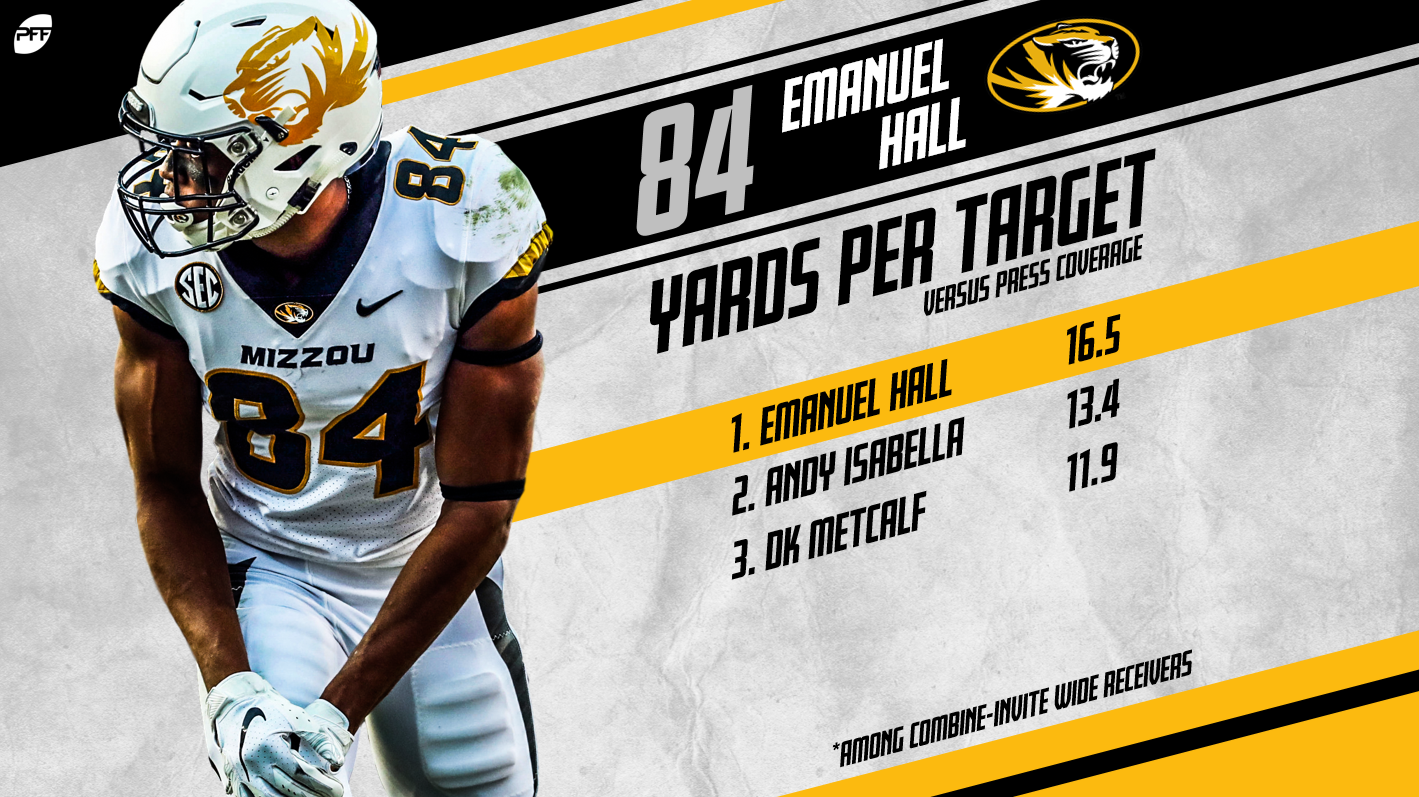 Among all combine-invite wide receivers, Emanuel Hall ranked first in yards per target when in press coverage (16.5). Andy Isabella ranked second (13.4) and D.K. Metcalf third (11.9). Hall drew press coverage on 33% of his targets, much more often than Isabella (12%), but not quite as often as Metcalf (42%).

Among all combine-invite wide receivers with at least 20% of their targets coming against press coverage over the past two seasons, Riley Ridley leads in fantasy points per target (3.15). After him, Emanuel Hall (2.85) ranked second and Diontae Johnson (2.71) third.

None of these wide receivers should be expected to be hindered too much by press coverage in their rookie seasons.